Swing By The Battery in NYC This Summer for Pixar Putt 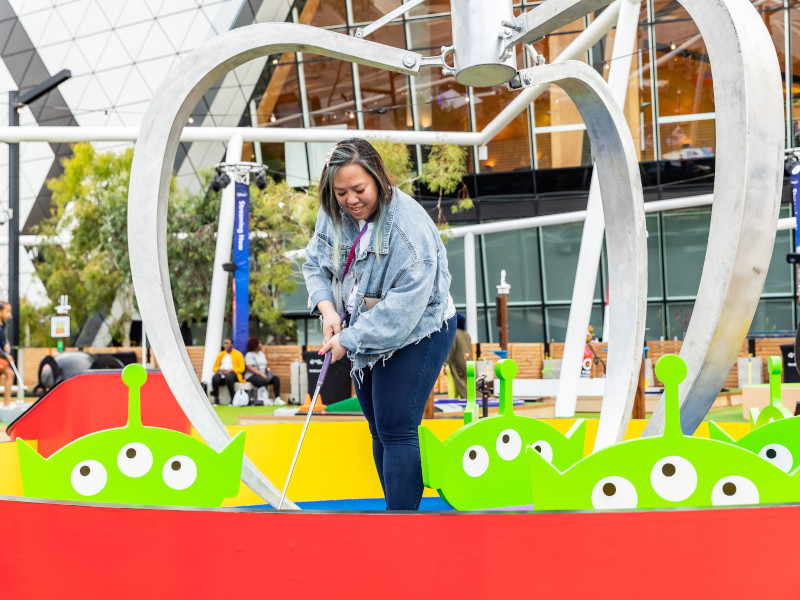 There’s just something wonderful about a bit of miniature golf on a warm summer day. Now take that joy and infuse it with your favorite characters from Toy Story, WALL-E, and The Incredibles. That’s Pixar Putt, happening now at The Battery in New York City this summer.

So what separates Pixar Putt from any run-of-the-windmill 18-hole putt-putt course? It’s designed with nods to beloved Pixar properties like Coco, Ratatouille, UP, and Onward. Though there won’t be any live characters, Pixar Putt promises plenty of photo ops.

Thanks to readers like you, we’re able to keep our site free of disrupting ads. Please consider subscribing to our print edition if you’d like to support us directly, and feel free to sign up for our free newsletter so you never miss out on news like this!

Running from Aug. 1 to Oct. 31 at Pier A in Battery Park City, Pixar Putt offers all the ingredients of a swinging good time. Best of all, it’s open every day of the week now through Halloween.

How to Get Your Tickets for Pixar Putt NYC 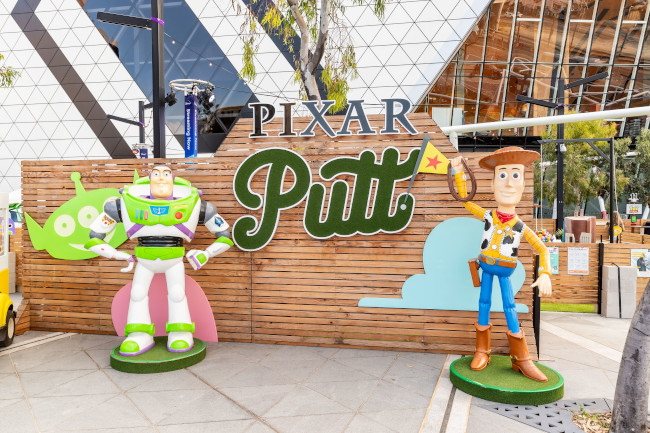 One of the main goals of Pixar Putt is offering up an open-air, socially distant event that’s safe and fun for the whole family. And to keep it that way, there’s only one way to get in.

You can only buy tickets to Pixar Putt online through PixarPutt.com. Though it’s possible to buy tickets the same day, several early August dates sold out quickly and will likely continue to sell like hot cakes Mickey Waffles. 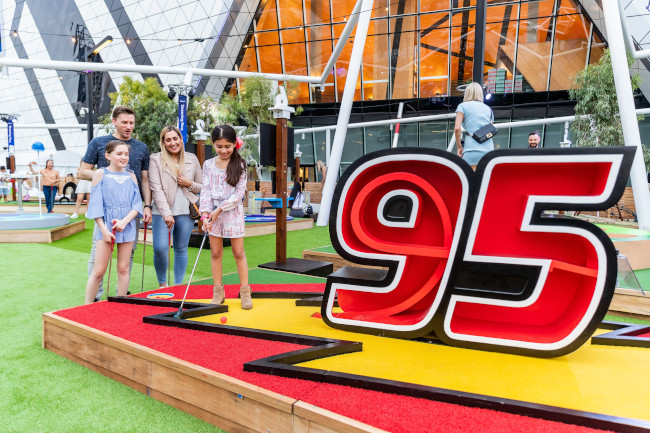 Tee off times are every 30 minutes from 10 AM to 6:30 PM Sunday through Thursday and 10 AM to 8:30 PM Friday and Saturday. Groups of four should be able to clear the course in 1.5 to 2 hours, though it could take longer with larger groups and on weekends and evenings.

Tickets are available for parties of up to eight people, and a minimum of two is required to play. You can contact [email protected] for info on larger groups, including corporate bookings.

Enjoy a Night Out with Pixar Putt After Dark 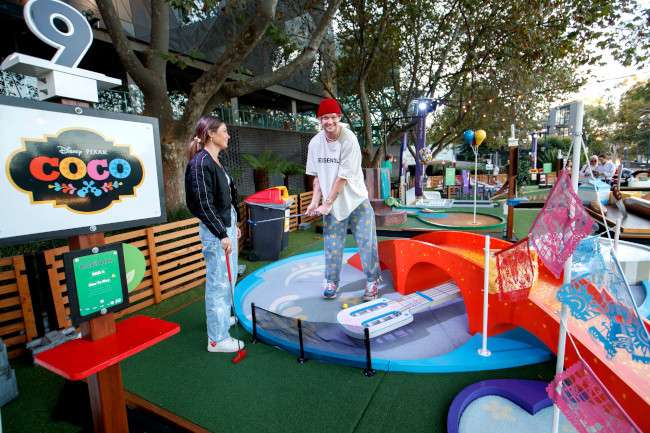 Sure, Pixar Putt is a great way to spend some time with the family in NYC. But what if you and all your homies want to have a fun night out at The Battery? Pixar Putt’s got that teed up, too.

Pixar Putt After Dark runs on Fridays and Saturdays with tee-off times at 7 and 8:30 PM. No one under 18 years of age will be admitted for After Dark.

How Much Does Pixar Putt NYC Cost? 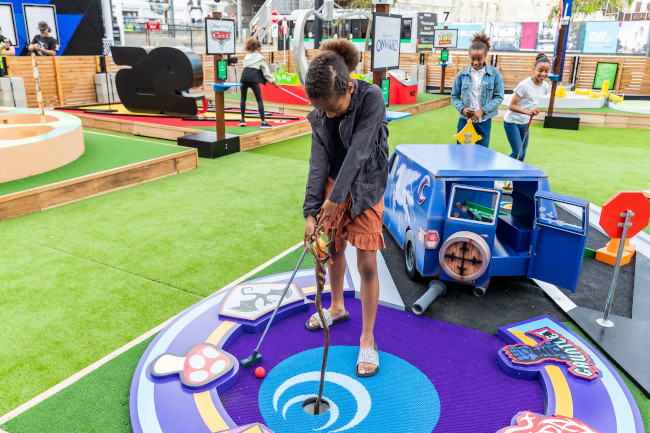 For a whole afternoon or evening’s worth of entertainment, Pixar Putt is one of the best tickets in NYC. 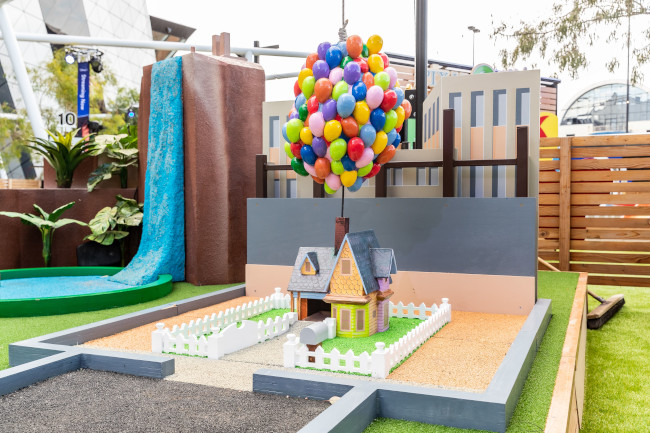 Discount tickets are also available for kids 12 and under during non-After Dark hours. Those’ll set you back $10 less than the adult ticket.

Got a big group? Family packs with admission for two adults and two kids cost $89.76 Monday through 1:30 PM Friday and $105.76 for the remainder of the weekend. Family packs aren’t available for Pixar Putt After Dark. 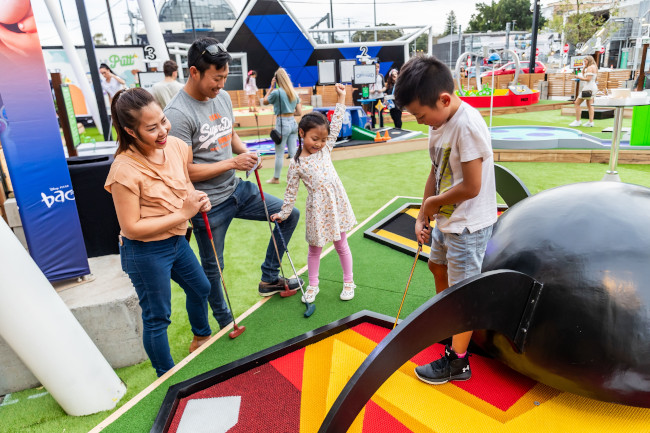 Admission includes everything you’ll need for a great game—clubs, balls, scorecards, pencils, and of course, hand sanitizer. And just in case you’re on the fence: There are no refunds and no exchanges for different timeslots.

Finally, because you’re all wondering: Masks are not required for vaccinated players but strongly recommended per CDC guidance. 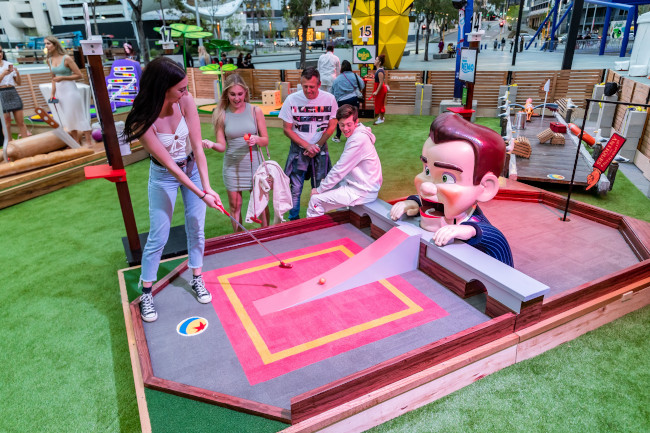 You’ve got a friend in tee at Pixar Putt. Bring along your own crew of misfit toys and have a memorable time at The Battery now through Oct. 31. 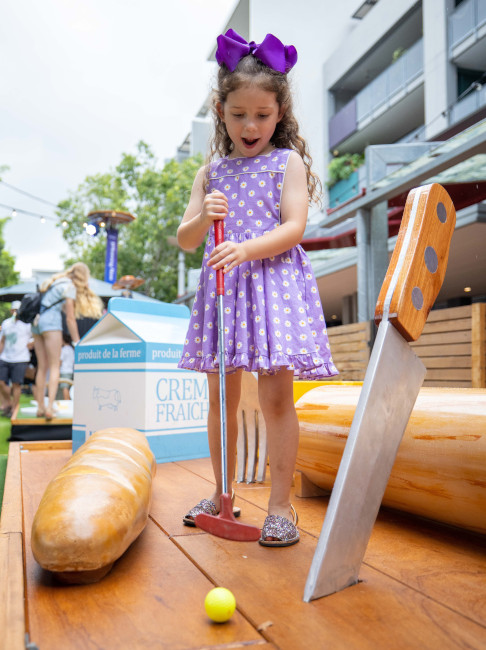 Not able to make Pixar Putt NYC? After Woody and friends close up shop in New York, Pixar Putt will be heading to San Diego, San Francisco, Los Angeles, Dallas, and Chicago, with more locations to be announced.

If you could play any Pixar character in a round of putt-putt, who would it be? Visit our Facebook page and tell us if you really think you could eke out a win over Elastigirl on the course.