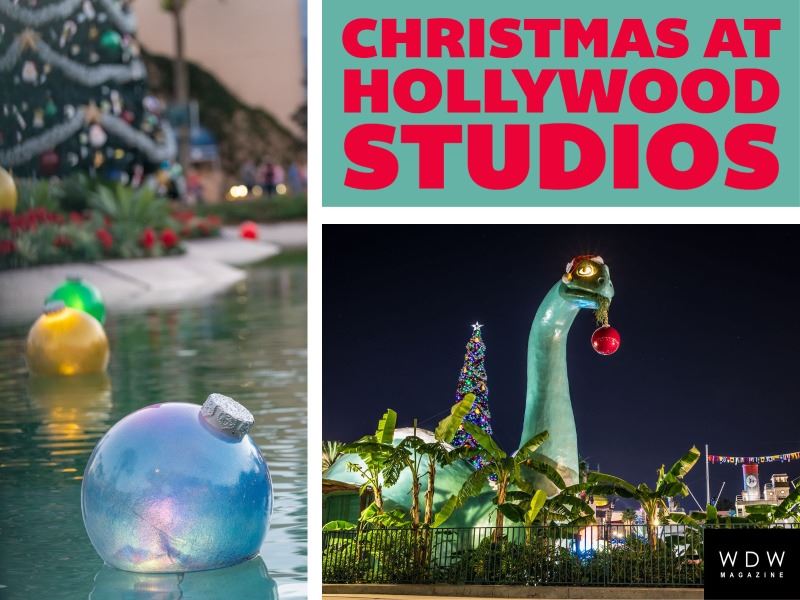 Planning to celebrate a 2021 Christmas at Hollywood Studios? Here’s what to expect.

Magic Kingdom is the obvious go-to for Christmas at Disney World, thanks to annual Magic Kingdom Christmas party (this year, it’s an After Hours hard-ticket event called Very Merriest). EPCOT is often a close second because of Festival of the Holidays. (Who wouldn’t want the chance at a meet-cute with Neil Patrick Harris?) 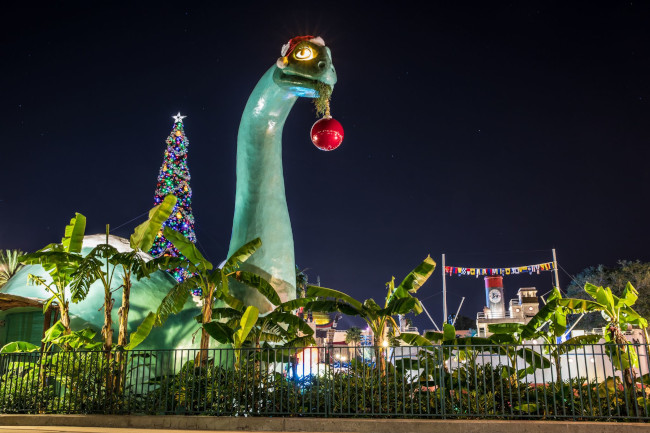 Gertie dressed up for the holidays. Photo by Brett Svenson 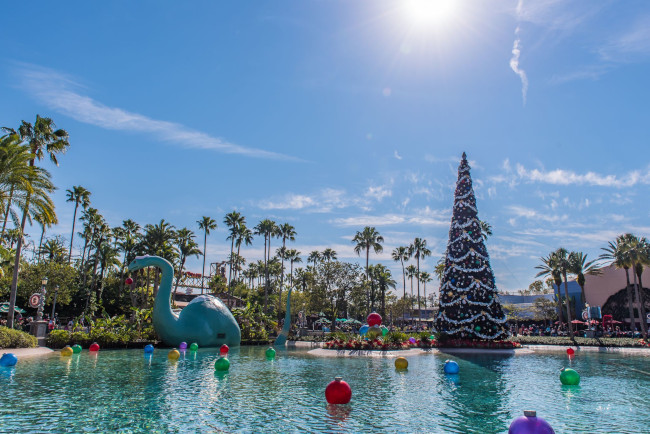 The Christmas tree on Echo Lake at Hollywood Studios. Photo by Laurie Sapp

But a kitschy dinosaur in a Santa hat is just the tip of the iceberg; DHS is full of holiday merriment, from the festive floating balls (if you know, you know) to the opulent silver garland and in-your-face window displays. Fitting with the theme of the Golden Age of Hollywood, this park is simply dripping with peculiar yet nostalgic decorations. 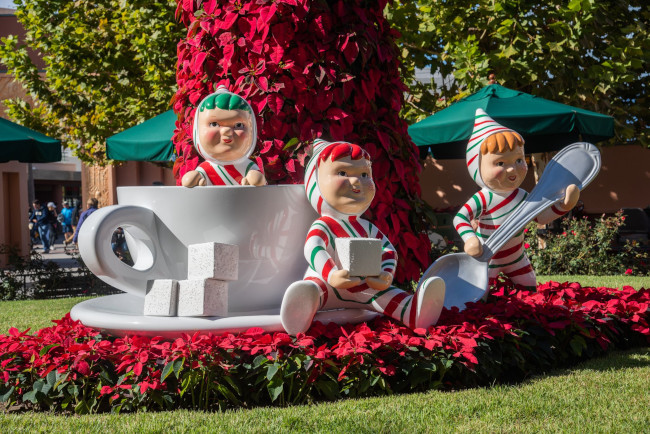 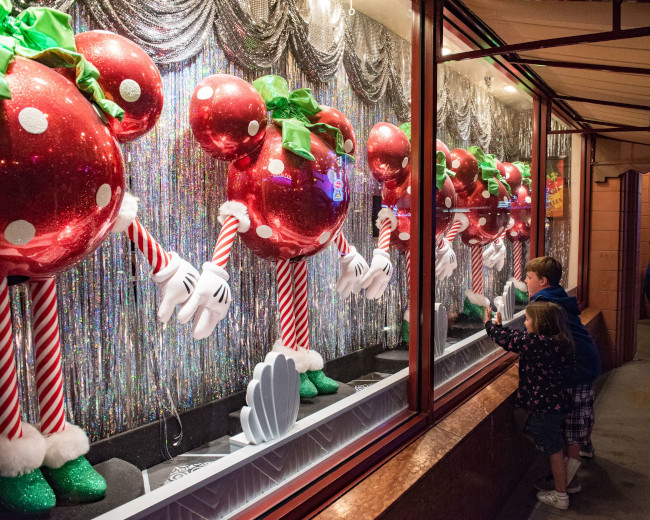 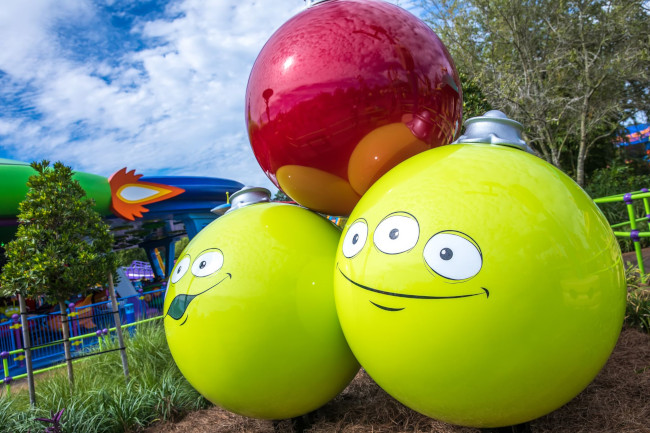 Toy Story Land gets in on the holiday fun. Photo by Brett Svenson 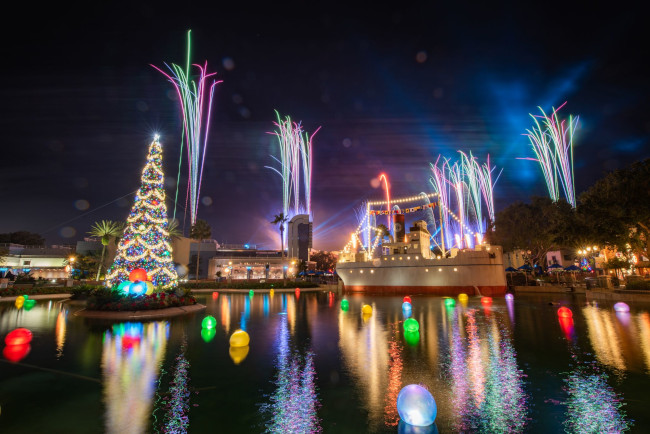 But it’s not just about what you can see (seeing isn’t believing anyway, remember?); it’s about what you can hear. If your November and December Spotify history is filled with searches for “cozy Christmas jazz,” you’re gonna love the tunes you’ll hear while strolling through Hollywood Studios.

Are you just in love with the Christmas decorations at Hollywood Studios? Editorial director Rain Blanken explores the history and meaning of the odd but lovable décor at DHS. Become a monthly subscriber to unlock the secrets of what Rain has deemed the “Golden Age of Balls.” 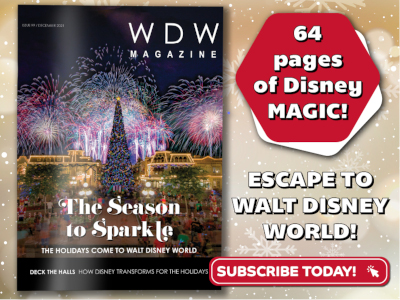 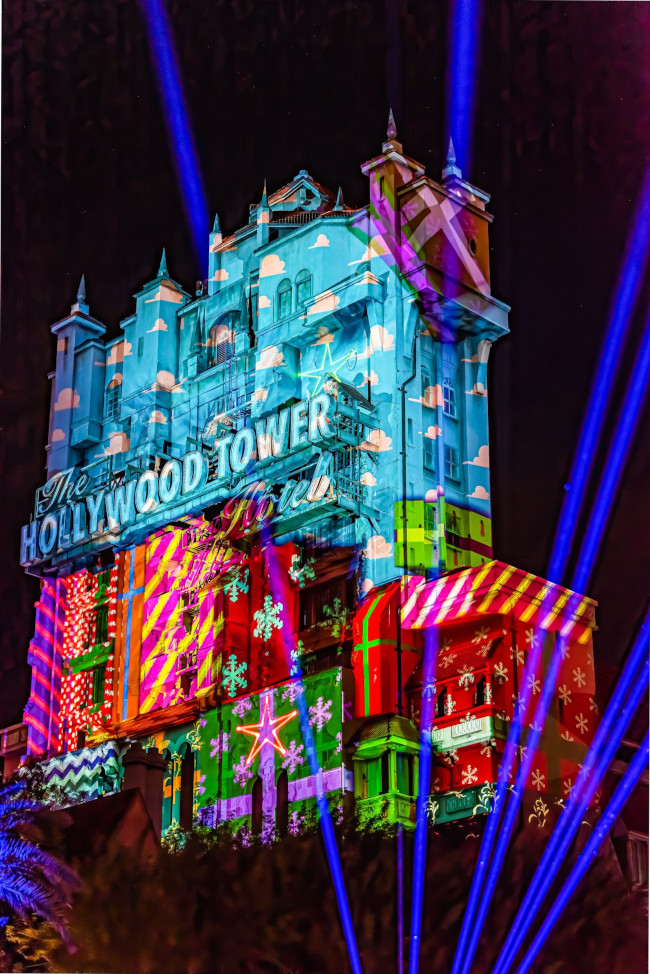 A staple of Christmas at Hollywood Studios is the Sunset Seasons Greetings projection show on Hollywood Tower Hotel. When the sun sets, head (where else?) to Sunset Boulevard to be treated to sparkling lights, Disney’s famous snoap (snow made from soap), and an amazing show projected onto Tower of Terror. Plus, LASERS down Sunset Boulevard. 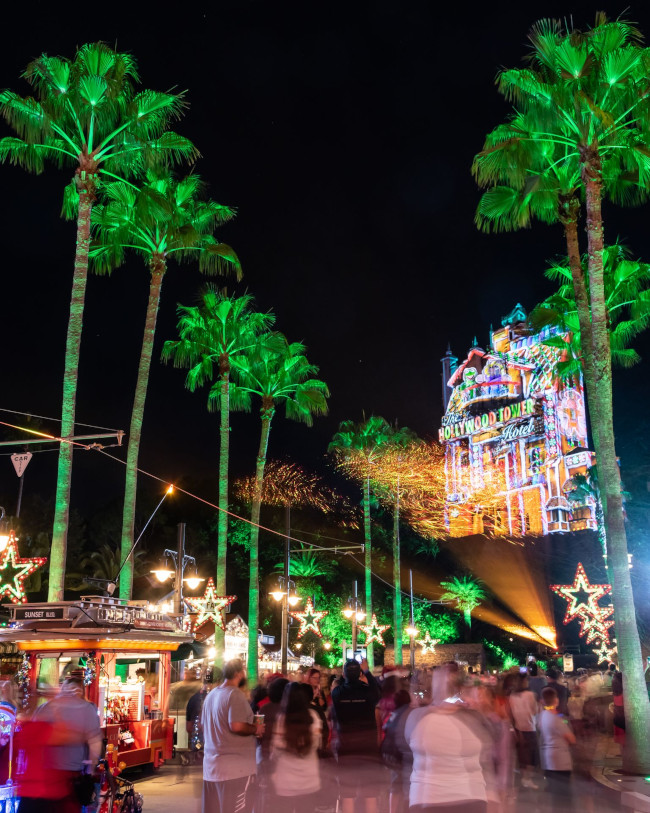 The view down Sunset Boulevard. Photo by Laurie Sapp 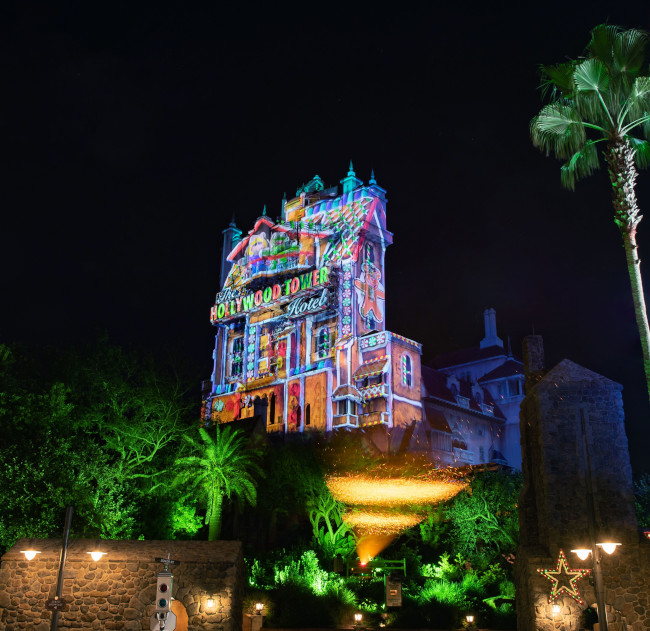 In between Sunset Seasons Greetings showtimes this year, you’ll be able to catch the Hollywood Tower Hotel in its special Beacon of Magic lighting for the Walt Disney World 50th Anniversary. The show typically plays for about 45 minutes after park close. 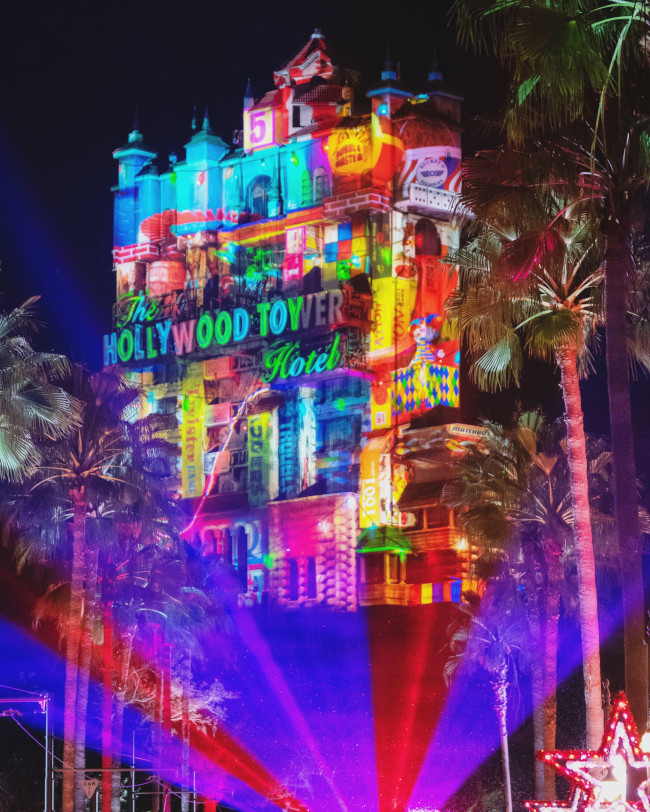 So. Many. Lasers. Photo by Judd Helms

Want keepsake photography of all four Beacons of Magic? Subscribe ahead of our special 100th issue this January for four pages of stunning photography dedicated to these special Disney World icons.

Hollywood Studios is, hands down, the best place to get your sweets fix at Christmastime. EPCOT may have savory snacks and boozy beverages to keep your yuletide bright during its Festival of the Holidays, but nothing tops all the sweet treats at Hollywood Studios. 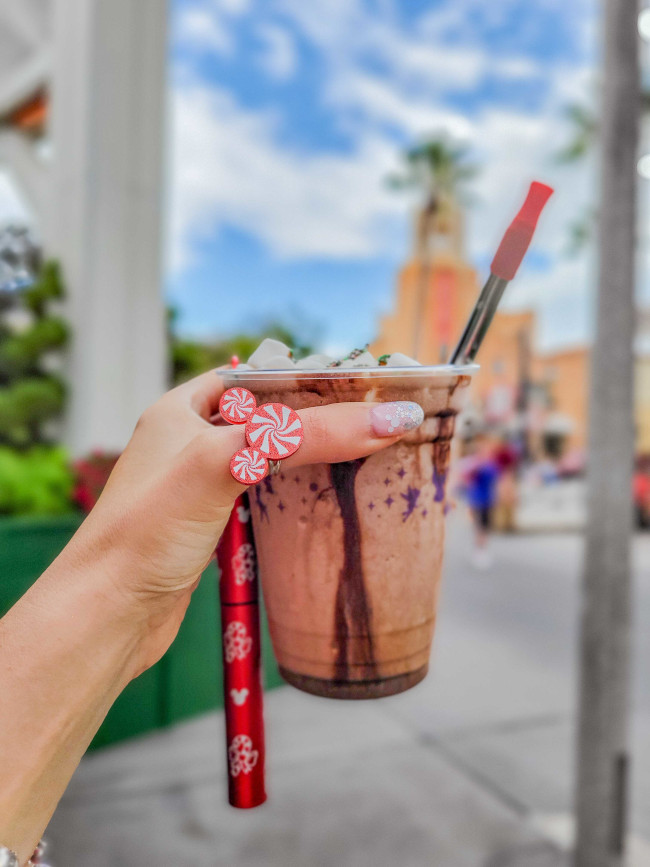 Here’s the complete menu of Hollywood Studios Christmas snacks for 2021: 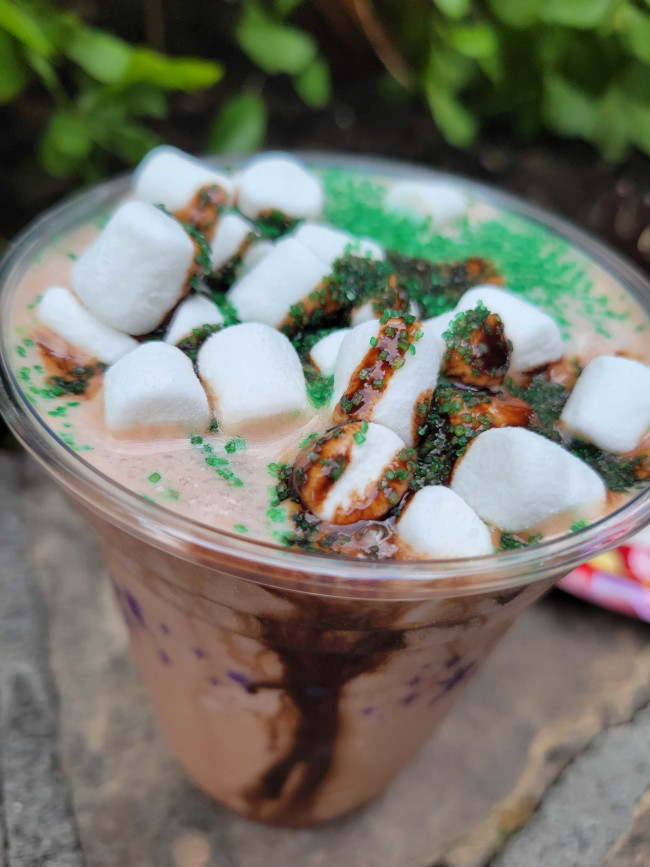 Feeling a little boozy this Christmas? Hey, ain’t we all. Get it with Black Cherry Bourbon at all the same locations.

Christmas on the Beach 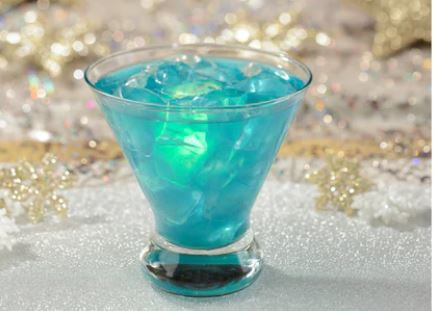 Christmas on the Beach. Photo courtesy of Disney Parks Blog 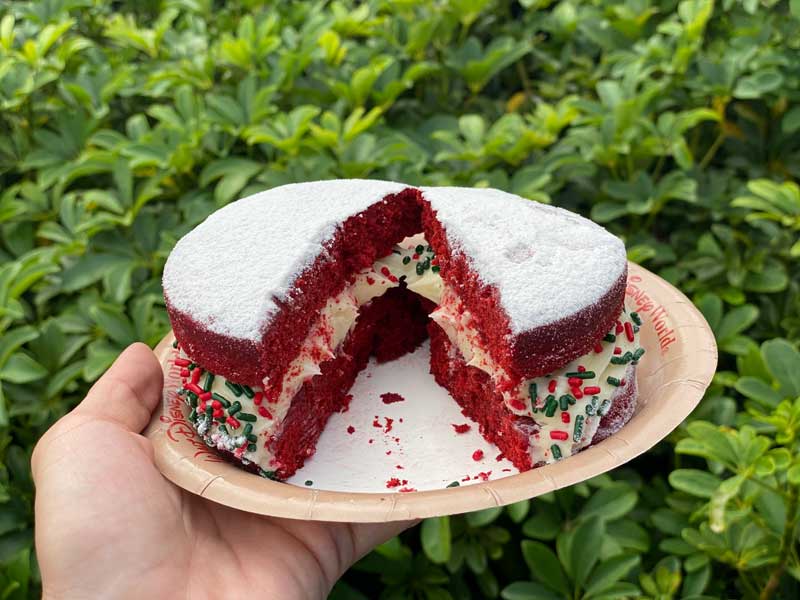 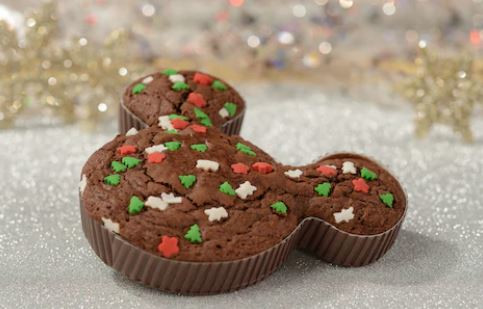 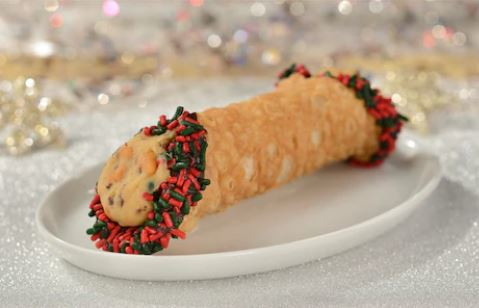 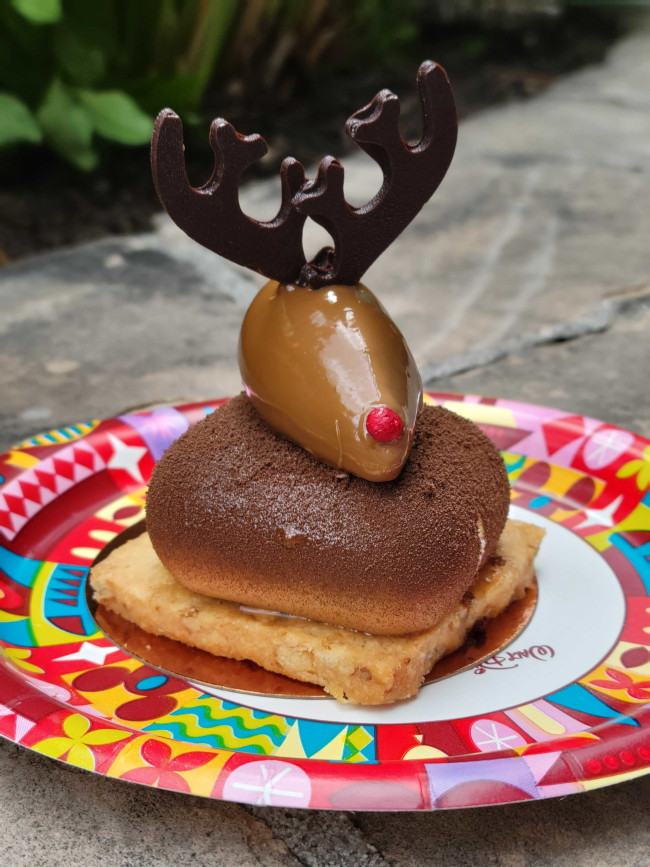 Tap for a COMPLETE list of 2021 Disney World Christmas snacks. 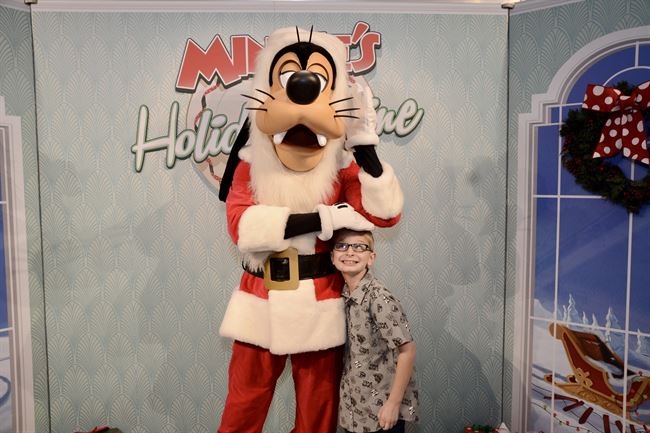 One of the best holiday experiences at Walt Disney World has returned for 2021, but this is one that books up almost immediately, so your ADR game will need to be on point. That’s right: It’s Minnie’s Holiday Dine.

Minnie’s Holiday Dine is a special character meal at Hollywood & Vine. The prix fixe meal costs $55 per adult and $36 per child. 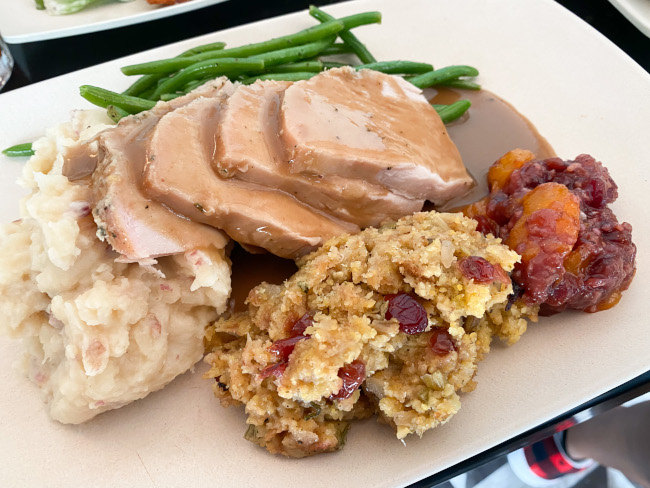 The food is good as any ho-ho-homecooked holiday meal. Photo by Julie de la Fe

At Minnie’s Holiday Dine, you can expect:

Tap for our full guide to Minnie’s Holiday Dine 2021. 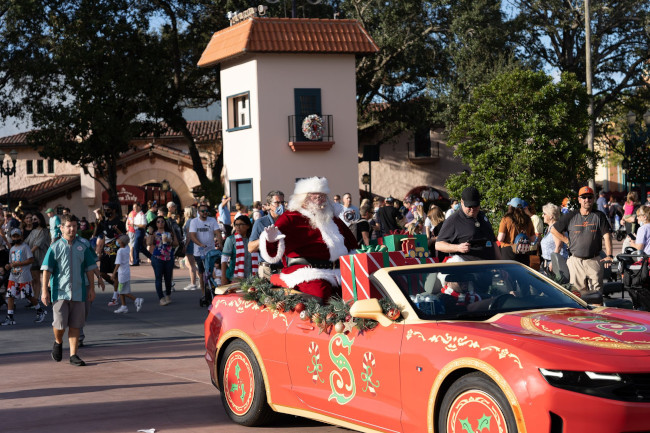 Santa gets his own motorcade at DHS. Photo by Danny Shuster

Seeing Santa Claus is a staple of any Disney World Christmas trip, right? While we’re not quite back to sitting on Santa’s lap because of continued COVID restrictions, you can spot Santa at Hollywood Studios during the Santa Claus Merry Motorcade.

But Santa isn’t in any old sleigh pulled by eight tiny reindeer. No, only the best for Santa at Hollywood Studios. Look out for jolly old St. Nicholas in a candy-apple red convertible during his special motorcade.

For the First Time in Forever: A Frozen Sing-Along Celebration 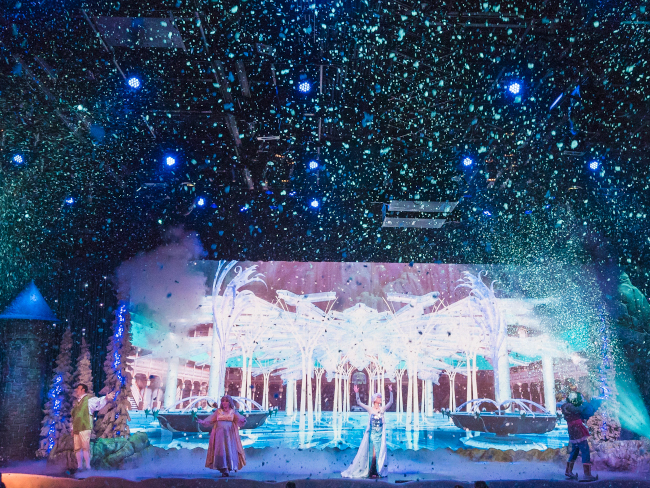 The Frozen Sing-Along gets a special ending during the holidays. Photo by Laurie Sapp

At Magic Kingdom, Jungle Cruise gets a special holiday overlay each year, making it Jingle Cruise. For the After Hours party, Monsters, Inc. Laugh Floor also gets a seasonal upgrade.

But Magic Kingdom isn’t the only park to get Christmas ride transformations. If you’re visiting Hollywood Studios, queue up for For the First Time in Forever: A Frozen Sing-Along Celebration. During the holiday season, the finale gets a special alteration featuring Olaf himself.

It’s time again for Christmas shopping. And while we highly recommend a gift subscription to WDW Magazine for the Disney lover in your life, it wouldn’t hurt to also hit up Hollywood Studios for the new Star Wars Christmas merch that they’ve put out this year.

Your Complete Guide to 2021 Christmas at Disney World