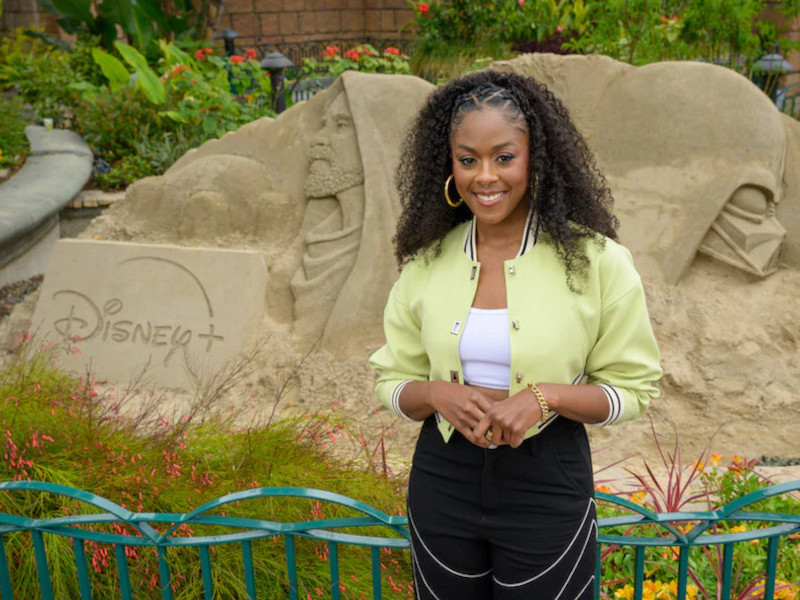 Watch out, Jedi Knights! Imperial Inquisitor Reva Sevander has touched down at Disneyland – or at least Moses Ingram has. The Obi-Wan Kenobi star graced the streets of Black Spire Outpost at Disneyland Resort’s Star Wars: Galaxy’s Edge earlier this month, swapping her armored cloak for a chic casual ensemble.

Afterward, Ingram returned to the planet Earth to check out the breathtaking sand sculpture that was recently installed at Disneyland Resort’s Downtown Disney, sitting just outside Star Wars Trading Post. The star looked right at home in front of the sand dune, appearing just like her epic character as if she were scouring the deserts of Tatooine. 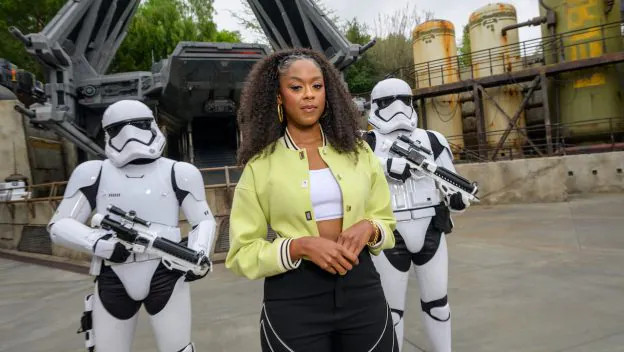 Moses Ingram is one of Hollywood’s newest rising stars – and for good reason! Her talent speaks for itself in the new Disney+ series Obi-Wan Kenobi, although some may also recognize her from her recent work as “Jolene” in The Queen’s Gambit. It’s no wonder how she landed the role as the fierce antagonist of Obi-Wan Kenobi, Reva Sevander.

Ingram’s character Reva Sevander, also referred to as the “Third Sister”, is an Imperial Inquisitor in the organization known as the Inquisitorius. The Inquisitorius is composed of dark side agents whose mission is to travel the galaxy in pursuit of the last remaining Jedi who had survived the Great Jedi Purge at the end of the Clone Wars. They are led by the notorious Darth Vader and a mysterious Grand Inquisitor.

Reva Sevander was actually once a Jedi herself, but she crossed over to the dark side as the Empire became more powerful. She is a ruthless and fearsome huntress, making her a worthy opponent for someone as powerful as Obi-Wan Kenobi. Although only a few episodes of the series have been released, we suspect that Moses Ingram’s character will be one of the most legendary villians in the Star Wars universe.

If you plan on visiting Downtown Disney in June, you’ll be lucky enough to catch a glimpse of a jaw-dropping sand carving on display in front of Star Wars Trading Post. In May, the mound of sand was molded into a breathtaking street scene depicting a hot day on Tatooine.

This month, artists transformed the scene into a dual portrait of Obi-Wan Kenobi and Darth Vader. Upon taking a closer look, you’ll notice details such as fragments of Tatooine landscapes and the silhouette of an iconic lightsaber duel between the estranged “brothers”. Don’t wait – this sculpture will only be on display for the rest of June!

Whether you side with the noble Jedi Knights or the ferocious Inquisitorius, make sure to tune in to Obi-Wan Kenobi on Disney+. Catch new episodes every Wednesday!