If there’s anything I love more than a secret, it’s a not-so-secret. And where can we find that special brand of nonsense? Yep, that’s right, Skipper Canteen at Magic Kingdom.

Among bad puns and ridiculous banter, Skipper Canteen is now serving up a “Not So Secret Menu” with summer delights.

A few weeks ago, my daughter and I were a couple of adventurers in dire need of refreshment.

It was a hot Orlando Adventureland morning, and we had just missed our first attempt to attend the Marceline to Magic Kingdom tour. It left without us, completely due to our own tardiness. Hey, I never claimed to be a morning person.

So, with that major foible under our belts and feeling pretty silly about it, we figured that there was only one place on the property for this pair of calamity Janes: Skipper Canteen. It’s the real-life version of chuckling at phone memes when you’re feeling down. We made a reservation for an early lunch without issue on the My Disney Experience app.

And it did the trick. Between our silly server and the wall-to-wall dad jokes, we were feeling pretty rejuvenated even before we ordered.

The Not So Secret Menu at Skipper Canteen features some light summer food and drink to get your adventure started.

Not So Secret Menu at Skipper Canteen

($15) Shrimp in a Cup: Coleslaw topped with sauced shrimp and lime

Shrimp in a Cup

Since we were hiding from the sweltering heat and nursing some wounds of embarrassment from missing our tour, we decided to split the light-fare of Shimp in a Cup.

It came out overflowing with shrimpy goodness in a cute metal cup! Rain enjoys a bite of shrimp from a cup at Skipper Canteen. Photo: Evelyn Long

As a coleslaw connoisseur, I always try to taste new ‘slaws and this one was pretty good. A bit sweet, and not too heavy on the dressing.

I didn’t realize it at the time, but you will actually take home the same cup (a new, clean version in a Skipper Canteen bag) after your meal. The souvenir mug is included in the $15 Shimp in a Cup price. Photo: Evelyn Long

I was already thinking that the flavor and presentation of the shrimp made it worth the $15, but with a souvenir cup, this is actually a steal. I asked our waitress which sangria would be the least sweet… I wasn’t about to sip a lot of syrupy sugar before heading out into a hot day. I also don’t drink much, so I really just wanted to try it so that I could report back for WDW Magazine on which paired well with the shrimp.

Our skipper suggested the Traditional Red to try with the shrimp, as it was the least sweet of the four selections.

It paired well, considering the sweetness of the coleslaw, and was overflowing with berries, which honestly was what I wanted out of it!

We didn’t try the Pao De Queijo, which are bread balls made from tapioca and cassava root flour.

This could be a good option for those that are sensitive to gluten, but the menu claimed “gluten-friendly”, so not sure they’re exactly allergy-free. Ask your server if these can be given a gluten-free preparation.

Each month we take an in-depth look (and bite!) into one of the many Walt Disney World restaurants. Subscribe today to get these scrumptious morsels in your mailbox. 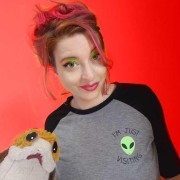