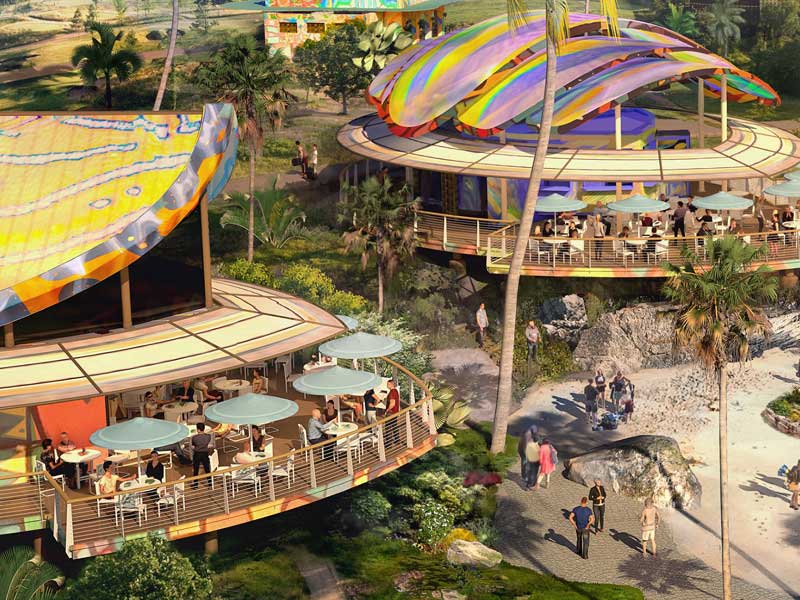 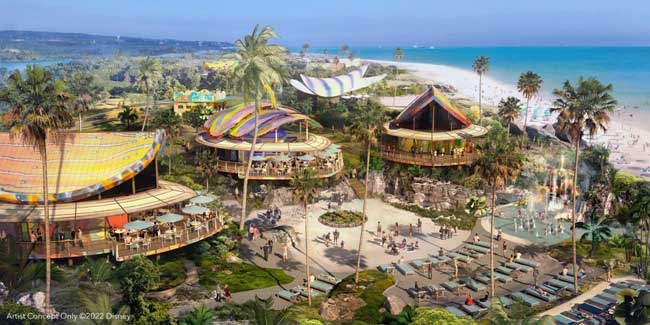 The current planned landscape of Lighthouse Point. Image via DCL

Expo-goers can say for the first time in three years that they’ve got another D23 under their belt (and lots of exciting Disney news came with it)! On Sunday, Disney Parks, Experiences, and Products Chairman Josh D’Amaro shared all-new concept art for the highly-anticipated Lighthouse Point.

Lighthouse Point will be the second private island destination that Disney has offered to their Cruise Line guests, located on the beautiful Bahamian island of Eleuthera. Disney opened their first private port, Castaway Cay, in 1998, welcoming passengers of the Disney Magic to enjoy the cay’s white sand beaches and crystal blue waters. 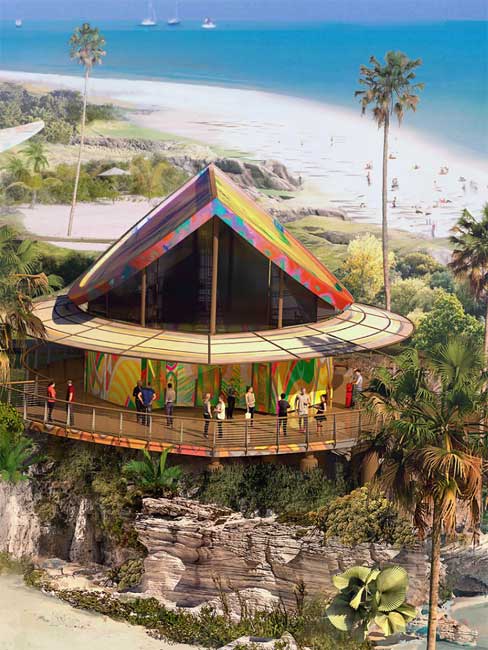 Tall roofs and lots of patio space dominate the village. Image via DCL

Over the past two decades, Castaway Cay has been a paradise where thousands of families have shared heartfelt memories and Lighthouse Point is sure to be just as unforgettable.

While Lighthouse Point will share similar stunning Bahamian views, the newest private port will shine a brighter light on the rich cultural history of the Bahamas through its design and practices. Descriptions of the destination assure guests that the port will showcase the amazing music, food, and art of the islands—sign me up! 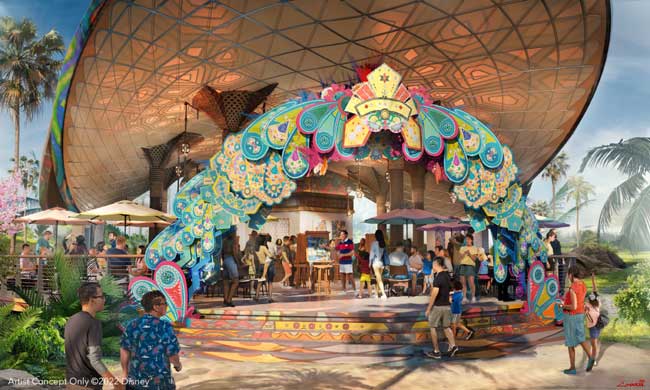 Imaginative buildings like these have us planning our first trip. Image via DCL

As detailed by D’Amaro, Lighthouse Point aims to embody the “color and energy” of the Bahamas. It’s easy to see how this inspiration translated into the design process in the newly updated concept art released on Sunday! Vibrant colors and organic-yet-modern design are apparent in the structures of the port, which will be “a recreation center, dining, shopping, a water playground, a cultural pavilion and more”. 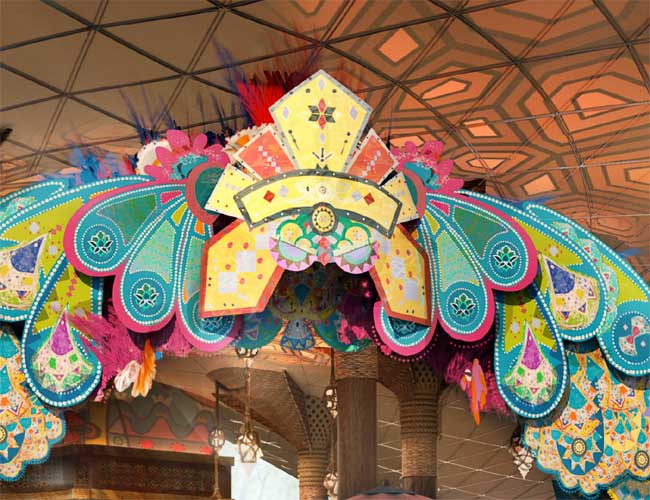 D’Amaro also shared how Disney’s commitment to the environmental preservation of the Bahamas will be practiced as the port develops and functions. According to Disney, they will be developing less than 20% of the property and supplying 90% of the port’s power from solar energy—what’s better than a relaxing vacay that you can feel good about? 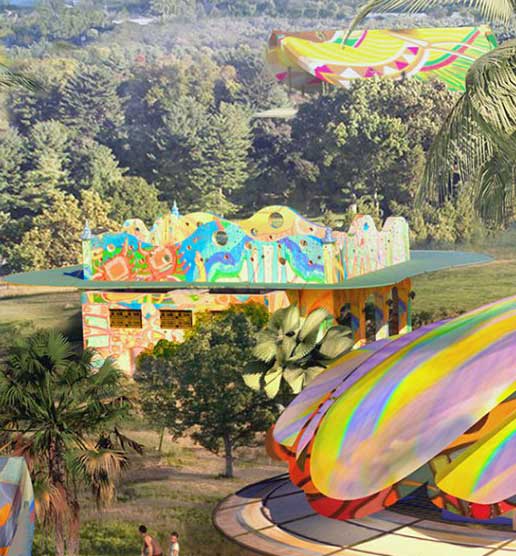 Detail of a smaller building in the distance. Image via DCL

The concept was first announced in 2019 at the last D23, where legendary Imagineer Joe Rohde described the destination as “not some replica of an old Bahamian town, not a pirate fantasy, but a dream-like landscape of adventure by the sea, where art and nature combine with Disney magic to create a destination that can only exist in one place”. 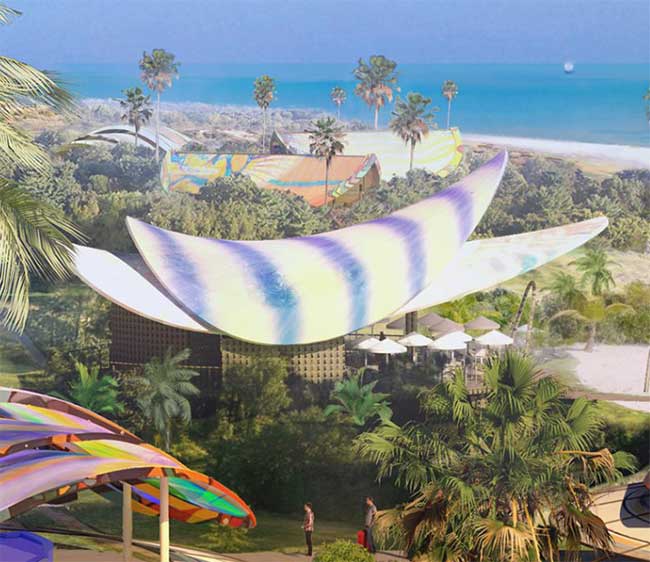 Rohde was clearly in love as he described the coast, “Lighthouse Point is the very southernmost tip of the island of Eleuthera. It has these strange eroded cliff forms along the edge of the ocean, these different beaches, scoopy coves that face this turquoise-blue more Bahamian kind of water, and it’s really spectacular.” 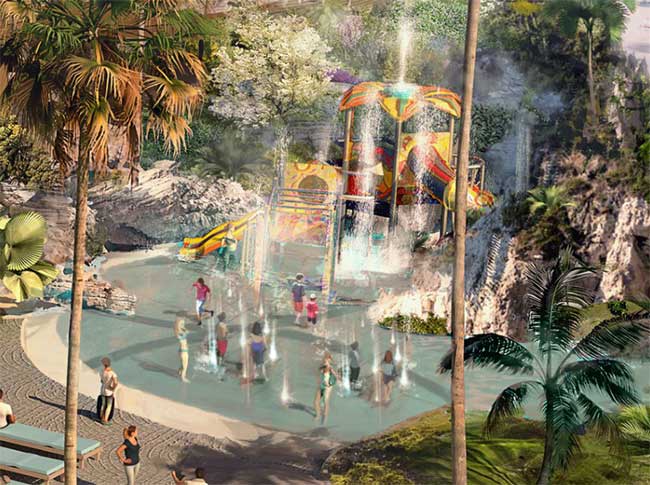 A splashpad is shown in the new concept art. Image via DCL

While Rodhe’s vision for the island still remains at the forefront of the port, the vision appears to have changed a bit. As you can see in the images below, it seems as though the Imagineers have gone a more colorful route with the structures on the island and shifted around some pathways and water features.

When Is Lighthouse Point Opening? 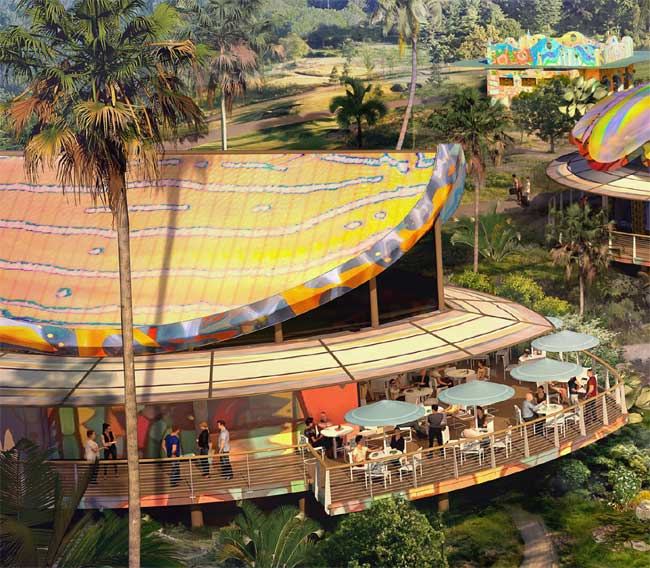 Restaurants and shops will likely populate the island. Image via DCL

Lighthouse Point was originally set to welcome guests on its shores between 2022 – 2023, but it’s apparent that the project has experienced some setbacks.

But on the bright side, the announcement at this year’s D23 means that the project is still on Disney’s (very busy) schedule. Guests can still look forward to exploring the natural wonders and cultural treasures that the island has to offer! Regardless of the opening date, I’ll be clearing my calendar in order to be there. If you see a lady flailing in the water and spilling her fruity drink, that’s me!

Want to jump on reservations as soon as they are available? Contact a Destinations to Travel agent today to let them know that you are planning to set foot on Lighthouse Point as soon as it opens. In the months leading up to booking, your agent will be ready to work with you to get you on a ship to the island.