An Evening with Neil Patrick Harris at the Candlelight Processional 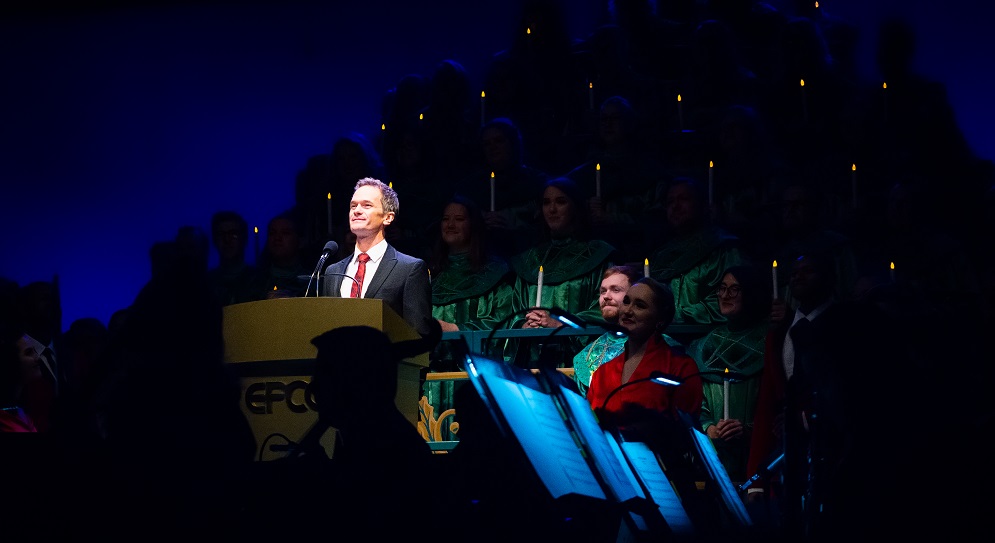 One of the most anticipated events of the season, the Candlelight Processional brings in celebrity hosts to tell the story of the birth of Jesus Christ between beautiful songs performed by a live 50-piece orchestra, the Voices of Liberty, and a talented chorus.

The Candlelight Processional is an amazing and elegant way to kick off your holiday season, so it’s understandably a little hard to get into… especially when a fan-favorite like Neil Patrick Harris is hosting. This legen….dary host brings the crowds, so make sure you have a plan for getting a guaranteed seat. 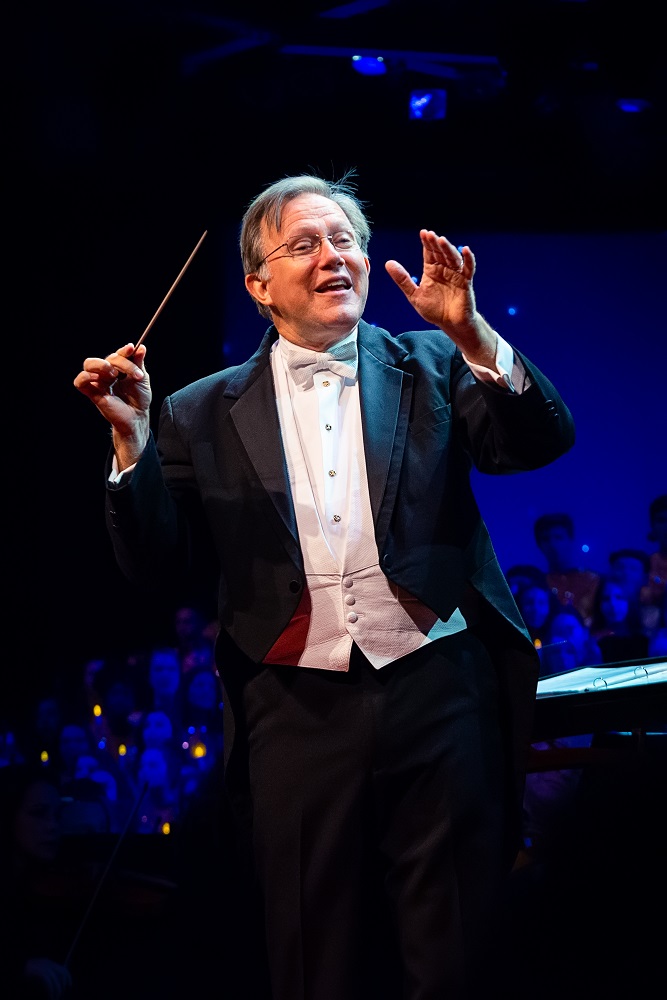 The conductor presides over the orchestra at Candlelight Processional. Photo by Courtney Reynolds

How to Guarantee a Seat at Candlelight Processional

Strolling through World Showcase during the holiday season, it’s hard to miss the lonnnnng lines outside of the America Gardens Theatre.

One of these lines, toward the Italy pavilion, will be the longest. This is the standby line, where fans will line up to hopefully get a chance to see the show. But you could be standing here upwards of 3 to 5 hours— with no guarantee of getting in. 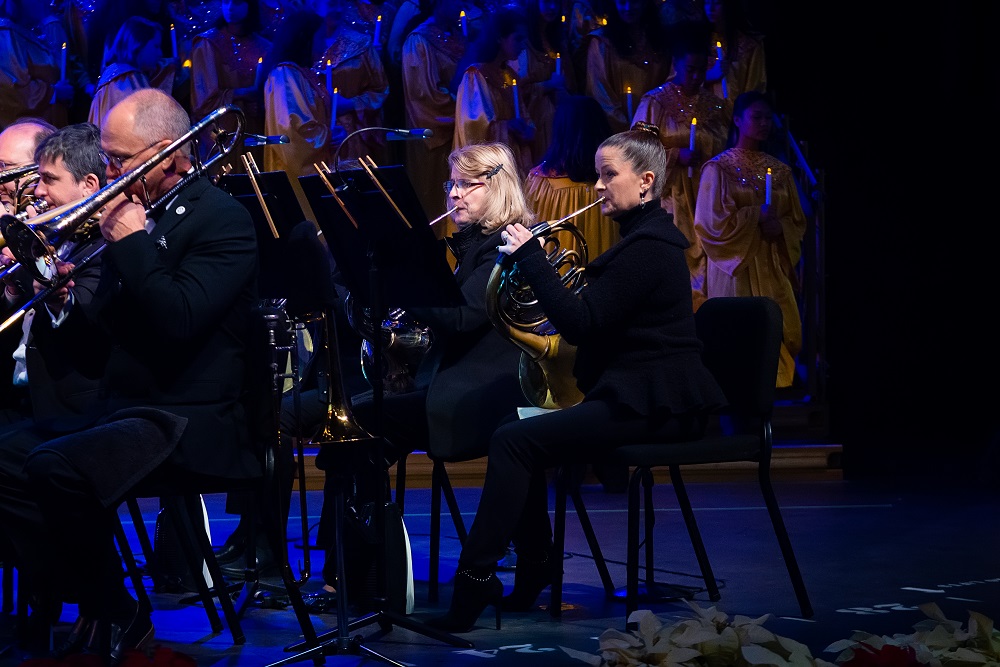 The orchestra at Candlelight Processional. Photo by Courtney Reynolds

The other line you’ll see outside of the theatre snakes toward the Japan pavilion. This one moves noticeably faster. This is the dining package line, where fans are guaranteed a seat at a certain showing.

Those who purchase the dining package at participating EPCOT restaurants will receive a sticker voucher to apply to their shirt and report back to the theatre before their appointed showtime.

Those dining during breakfast hours will receive a ticket for the 5:00 P.M. show, and those eating lunch and dinner will be assigned tickets for the 6:45 P.M. or 8:15 P.M. shows.

But listen up: Seats reserved for dining package participants are still first-come-first-serve, hence the line appearing at 3:00 for the 5:00 show.

Having never seen the Candlelight Processional, I have to say that the last thing I expected was a human Christmas tree. As the Voices of Liberty filed in, each with an electric candlestick, I was so delighted to see them forming a tiered Christmas tree design in the middle of the stage.

The rest of the chorus assembled stage right and left to create a wall of sound that was absolutely breathtaking to sit in the wake of. Situated in the middle of the Christmas tree, Neil Patrick Harris could be caught singing along to some of the hymns.

They took us through some dear holiday favorites, including beautiful renditions of O Come All Ye Faithful,  O Holy Night, and a rousing version of The Hallelujah Chorus. 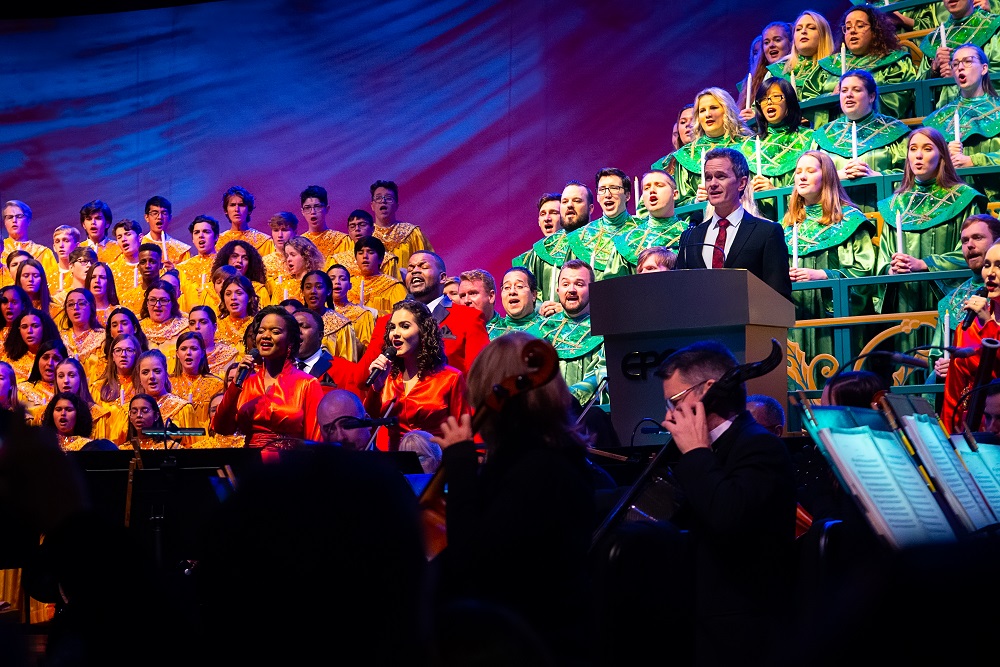 We were lucky enough to experience the Candlelight Processional with popular host, Neil Patrick Harris. Getting a seat for his shows is especially tough, so you’ll likely see some of the longest lines during his performances!

Neil was affable and charming as always, delivering a humorous and warm monologue to get us ready for a beautiful performance. At one point he said, “Fun Fact: Two of the Cast Members onstage tonight are animatronic.”

He wouldn’t tell us which ones.

Funny as he was during the monologue, he remained relatively somber throughout the show as he told the story of the birth of Jesus Christ. I have heard that this is typical of Candlelight Processional hosts, as they lend reverence to the material and tone of the show. 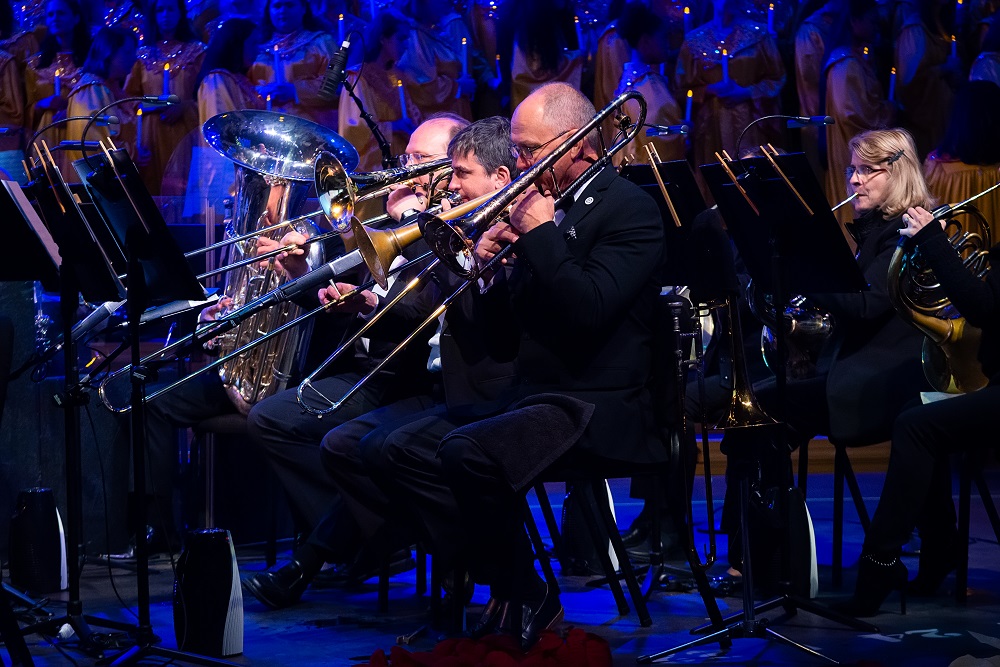 Candlelight Processional performances are at 5:00 PM, 6:45 PM and 8:15 PM nightly. Dates run from November 29 through December 30, 2019. The shows included with your park ticket but seating is first-come-first-serve.  Purchase a dining package to guarantee your seat.

Did You Miss It?

Did you miss our up-to-the-minute stories on Instagram? I was showing off the Candlelight Processional from the fourth row! Check out our story highlight to view the show from this location and get all my tips on snagging a seat for your favorite narrator.

Want more tips for holiday fun at Walt Disney World? Subscribe to WDW Magazine to hear from the experts and come with us on our trips!