Experiment: Most Popular Disney Princess for Your Age Group 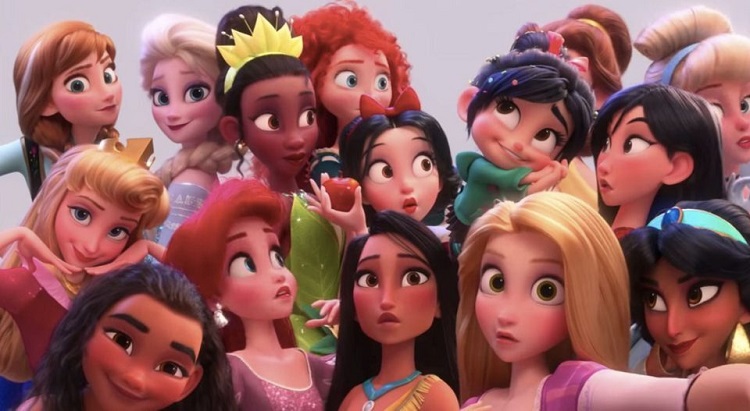 Forget fairest of them all … have you ever wondered which Disney Princess is the most popular of them all? I asked over 500 WDW Magazine fans to find out!

And I had another question: Does favorite Disney Princess align with age? I imagined if I polled a group of people age 70+ the favorite princess might differ from a group of children under 10.

So I decided to find out for myself who is the most popular Disney Princess, and if there’s any correlation to the person’s age.
Is it Cinderella, with her castle front and center at Walt Disney World? Or Sleeping Beauty with her counterpart at Disneyland?


Thanks to readers like you, we’re able to bring you highlights like these without bombarding you with annoying ads. Please consider supporting us directly by subscribing to our print edition, and make sure  to sign up for our FREE newsletter so you never miss out on the latest at Disney World! 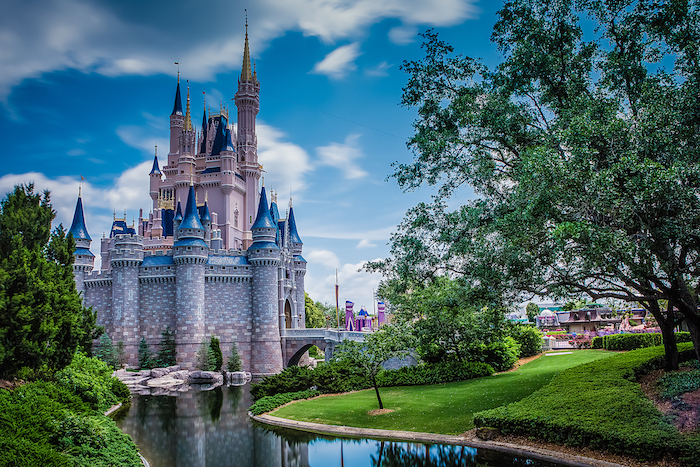 Does this giant castle make people like Cinderella even more? Photo by Brett Svenson

I remember something from high school about how to write a proper hypothesis—you have to do an “if, then” statement, or something like that.

I’m not going to do that today. I apologize to my high school science teachers.

My assumption on this is that there is going to be a correlation between age and the most popular Disney Princess.

I think that if you “grew up” with a certain Disney Princess, you are more likely to have her as your favorite.

The oldest age groups would likely lean toward enjoying Snow White (1937) and Cinderella (1950).

To figure out if there is a correlation between age and most popular Disney Princess, I went to you guys, our readers! On WDW Magazine’s Facebook page, we created a post and asked people to comment with their age and favorite Disney Princess. We got over 500 responses from you!

While this was a great way to get my answer, there are a few issues with the sampling I got, and in general, this is not really the most scientific test. But this isn’t a science website, so it’s perfectly fine.

Here are a couple of issues with the test:

If I were to do this super scientifically, I would want to get a set amount of people from each age group, and poll them separately. But that’s for another time.

Who Is A Disney Princess?

When you think of Disney princesses, I am sure a group of characters come to mind. And most of them are probably official, according to Disney! But you might be surprised to see the official list of Disney Princesses is actually very small.

The official Disney princesses, via Disney, are:

You might notice a certain duo is missing from this list: where are Anna and Elsa from Frozen? Well, they aren’t official Disney princesses! Don’t ask me why.

However, many people consider them official because they were included in the Princess scene in Wreck-It Ralph 2: Ralph Breaks the Internet. So even though they’re not official, we’ll count them on this list.

I did remove any comments for Tinker Bell, Mary Poppins, Vanellope (even though she convinced the others she is a princess), or Leia.

And now, without further ado…

Here are the princesses, in order of most popular to least popular, with a little info on the age range who voted for them!

Keep in mind that the average age for “experiment” participants was 41. 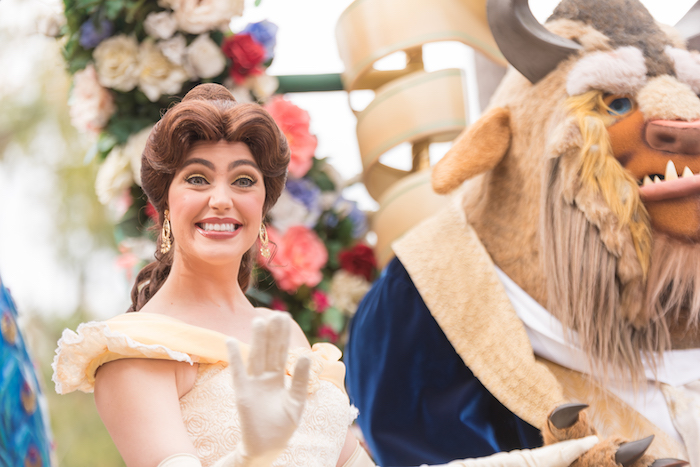 Though I am not entirely surprised by this, I can’t say it was what I was expecting. Belle wins most popular princess!

Those who favorited Belle were an average age of 39. This is slightly younger than the average median age, but very close to it, which makes sense, as she got the bulk of the votes (143 out of a little over 500). 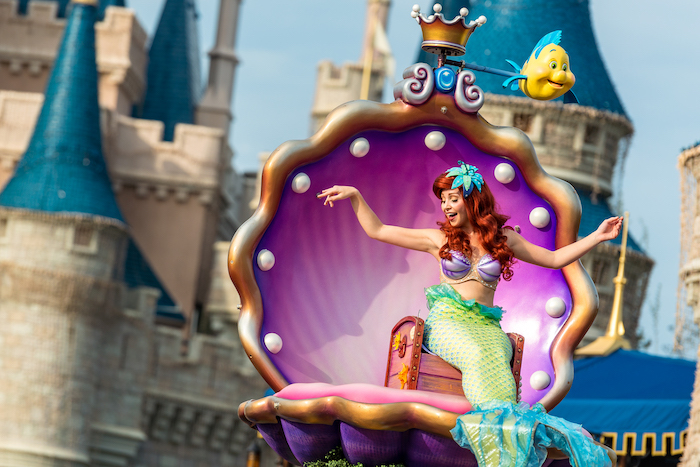 Under the Sea with a top favorite! Photo by Cliff Wang

Ariel comes in second with 89 votes and a slightly younger favorite audience at 36 years old!

Ariel’s average age being younger than Belle doesn’t make a lot of sense, because The Little Mermaid came out before Beauty and the Beast. But mermaids are more trendy with a younger crowd! 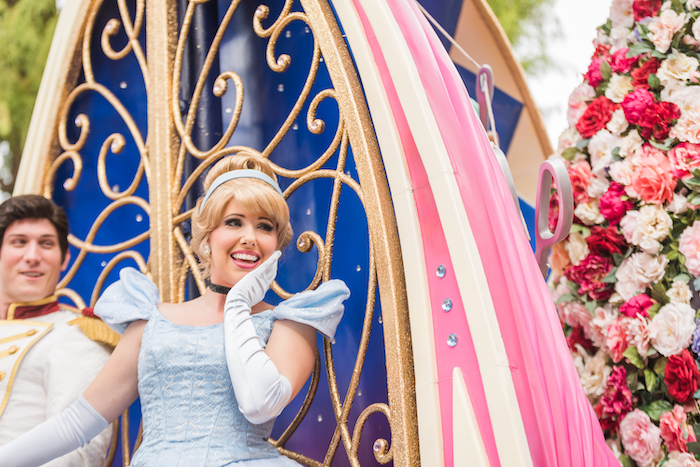 Cinderella and her prince. Photo by Laurie Sapp

I expected Cinderella to be number one, so making third isn’t too surprising. She is the quintessential Disney Princess, and her castle stands proud at the Magic Kingdom.

Cinderella had 75 votes, and the average fan age of 48! This aligns with my hypothesis. Cinderella garnered the most votes (versus the other princesses) from those in their 70’s. 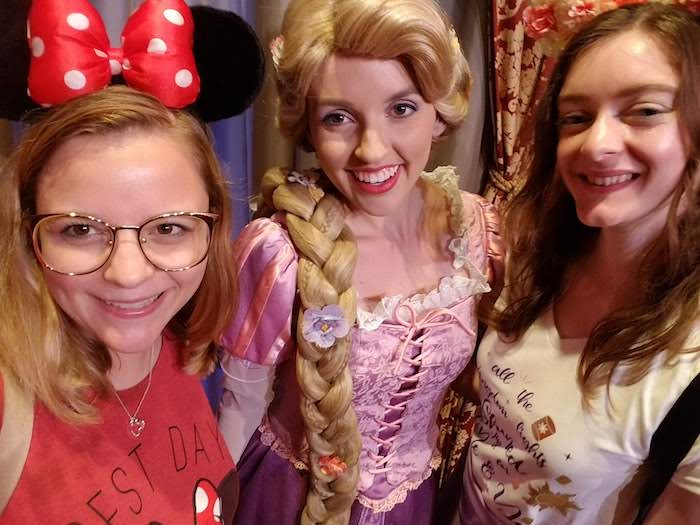 Myself and WDW Magazine writer Caitlin Reddington, with Rapunzel. Photo by Leah Sikes

Rapunzel is my favorite Disney Princess. I am torn being happy she made the top and feeling like I’m just going with the rest of the crowd.

Rapunzel got 52 votes, with the average fan age the same as Belle, 39! Very surprising. 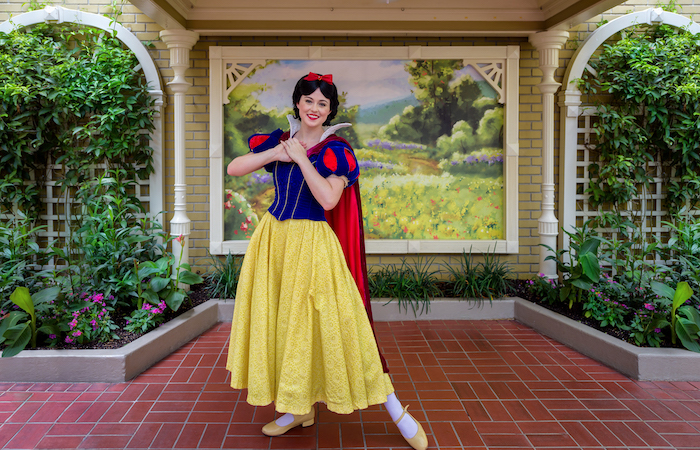 Snow White, the OG Princess. She got 39 votes in all, and her fans’ average age again confirms my hypothesis: 50 years old (the oldest average fan age of all the Princesses included in the poll). 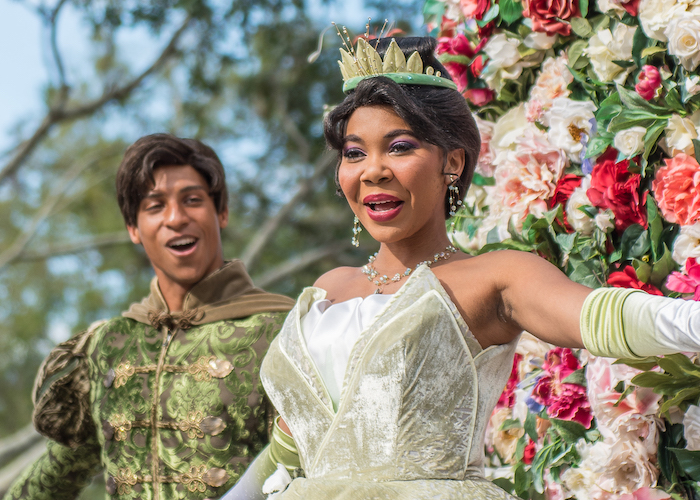 The Princess and the Frog! Photo by Laurie Sapp

I didn’t expect Tiana to be super popular, as her movie was followed up very quickly by Tangled, and that garnered a lot more support than The Princess and the Frog.

Tiana got 21 votes, with an average fan age of 35! Since she’s newer, it only makes sense that her fans are a little younger. 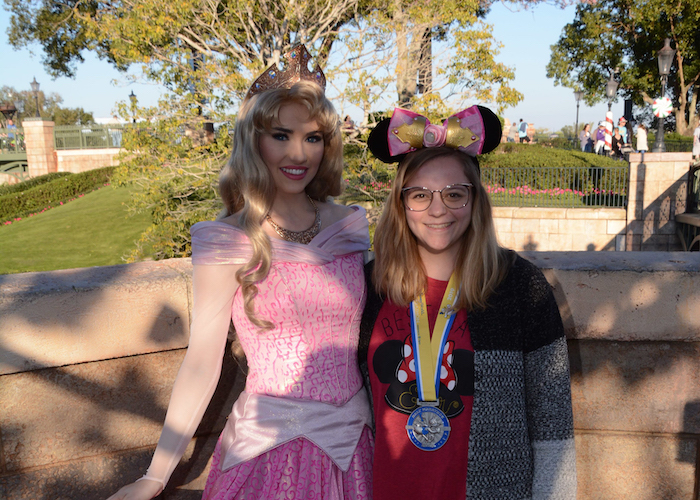 Sleeping Beauty making the bottom half was kind of surprising to me. And honestly, my dog was really offended (her name is Aurora, after the princess).

Despite being front and center at Disneyland, Aurora got 20 votes. Her average fan age was 37, another outlier for my hypothesis. 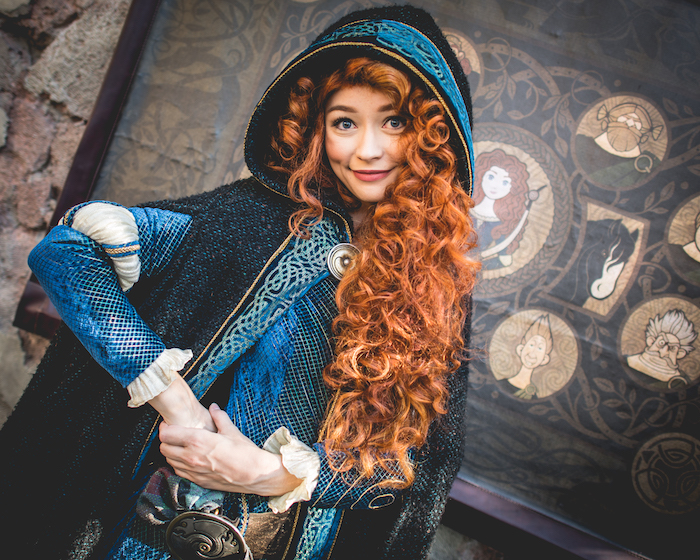 Merida got 19 votes. And, in a complete shock to me, her median fan age is on the higher end at 46. 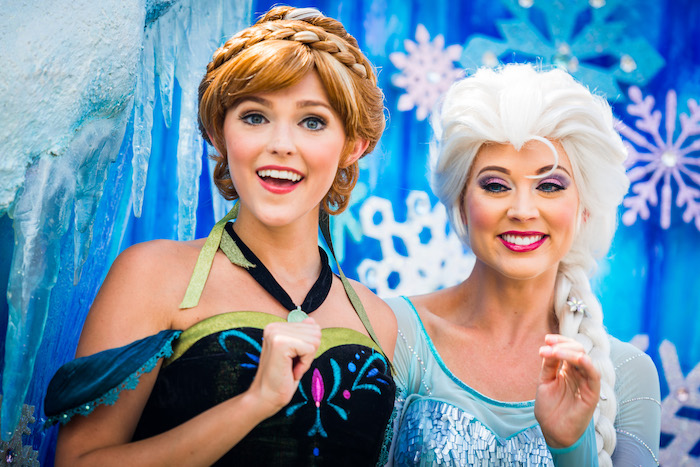 The sister princesses (though they’re both queens now!). Photo by Cliff Wang

Jasmine, Anna, and Elsa all received 12 votes each.

I think had there been a greater number of 25 and under voting, these three would have been much higher. We all know Anna and Elsa are very popular with children these days.

I also think Jasmine is likely a second favorite for many. Like me: I love Aladdin, and Jasmine is wonderful, but she just isn’t my favorite.

Jasmine’s average fan age was 37. Anna’s, surprisingly, was 44, while Elsa’s fanbase was the youngest of all the princesses at 32. Elsa also received the most votes from the under 18 crowd—with our youngest voter ringing in at 2 years old! 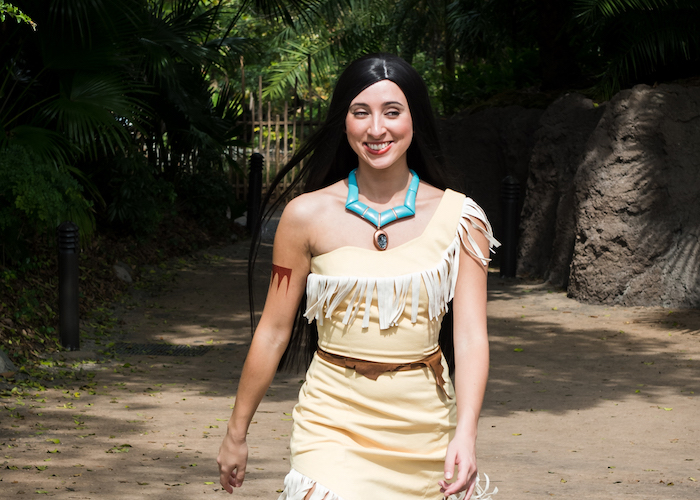 You can sometimes find Pocahontas at The Animal Kingdom. Photo by Laurie Sapp

I feel like Pocahontas and Mulan are often forgotten Disney Princesses. We all love them, but not many of us think about them when we think of the other princesses on this list.

I am surprised Mulan didn’t rake more in with a live action movie in the works.

They both got 7 votes each. Mulan’s average fanbase is 36 while Pocahontas’s is 39. 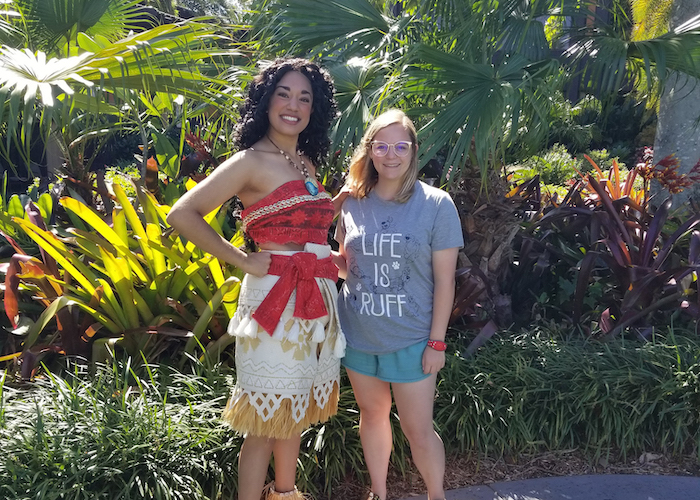 Moana at the Polynesian Resort! Photo courtesy of Leah Sikes

Honestly, I am really sad about Moana making last on the list. It almost made me want to change my favorite princess! Moana is a great story, but I think her newness played against her in this fight with some really big names.

She received 6 votes out of a little over 500, and her average fan age was 35—this is on the younger side for our averages!

Though I did notice some correlation between age and favorite Disney Princess, I think it is not the main factor in determining favorites. I think it is probably a small factor, as nostalgia is a powerful thing.

But the real thing is connection. A few commenters left their reasons behind who their favorite is, and I noticed many of them said things about the princess’s personalities, their struggles, their likes, their nationalities, and what they stand for.

People find a favorite Disney Princess in who they feel the most connection to, who they see themselves most in.

For me, I love Rapunzel because I love the story, and it all feels really magical and beautiful to me. Plus, growing up, I had incredibly long hair (read: down to my knees), so Rapunzel and I have something in common.

Do you want to find out even more Disney magic? Subscribe to our print magazine for magic delivered to your door monthly!