Modified Character Sightings at Disney World: What to Expect 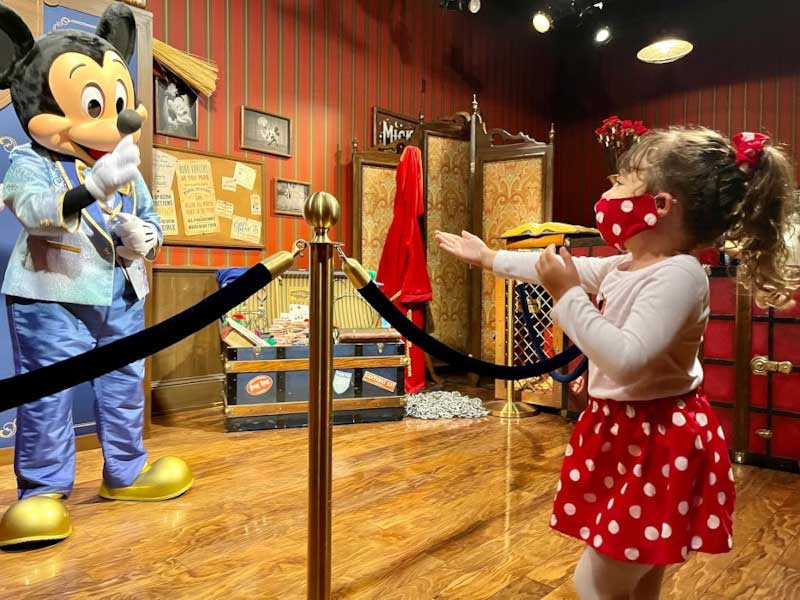 It truly feels like the first time in forever that Walt Disney World has opened its doors to the one-on-one character interactions Disney fans know and love. And let me tell you; it’s nothing short of magical.

And while I long for the return of warm hugs, I’ll happily accept the ability for my little one to twirl with her favorite princesses from a distance.

Wondering what you can expect from modified character sightings at Disney World? Here’s a run-down of what these new character experiences are like. (But—be warned—as Disney rolls out the red carpet for our favorite classic characters, details are subject to change.) 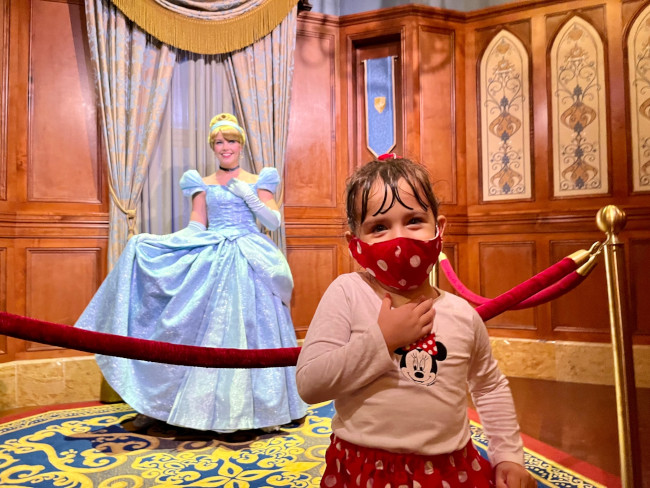 I’ll be honest. I was skeptical about the new indoor sightings. My daughter is accustomed to being able to run full-force into characters’ arms, hold their hands, and “boop” their noses.

I was afraid these reimagined sightings would just be missing that extra bit of pixie dust that made character encounters so special.

My daughter just about teared up when she saw Mickey Mouse waiting for her (and, if I’m honest, I did, too.) 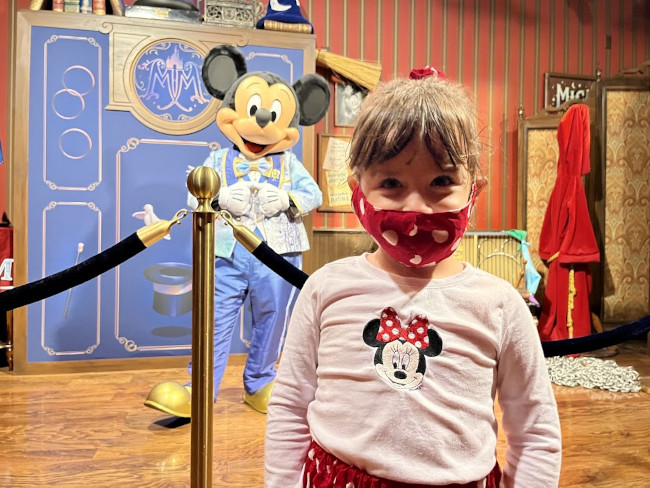 Although we were separated by a rope, seeing Mickey Mouse and the princesses one-on-one felt like coming home.

My daughter wasn’t at all phased by the distance. She was just happy to be steps away from the characters who truly bring the magic to life.

Parenting tip: I was nervous my toddler wouldn’t understand the COVID-19 rules or respect them, but detailing what she could expect ahead of time helped. I told her she needed to keep her mask on and stay behind the rope to keep our character friends safe—and she did! She was perfectly willing to comply with the rules and didn’t seem to mind a bit. 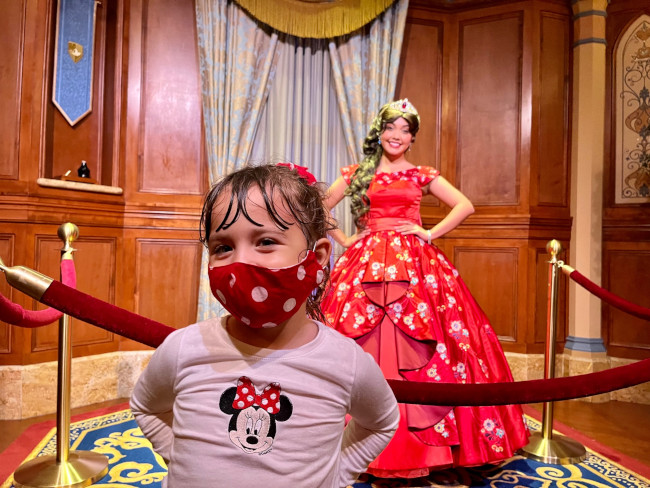 Don’t expect to meet every character this way. Elena was one of four Disney Princesses we met. Photo by Dani Moritz

It’s important to note that not all characters are back in business. So far, these are the Walt Disney World character sightings that appear to be available: 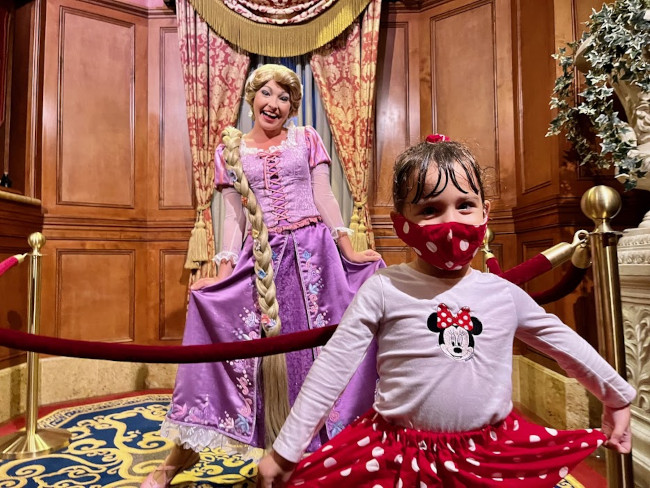 Keep in mind that not all characters are available from park open to close. For example, when we visited Magic Kingdom, the princesses were available from 9 AM to 5:30 PM, and Mickey Mouse was in Town Square Theater from 9 m to 8:30 pm. 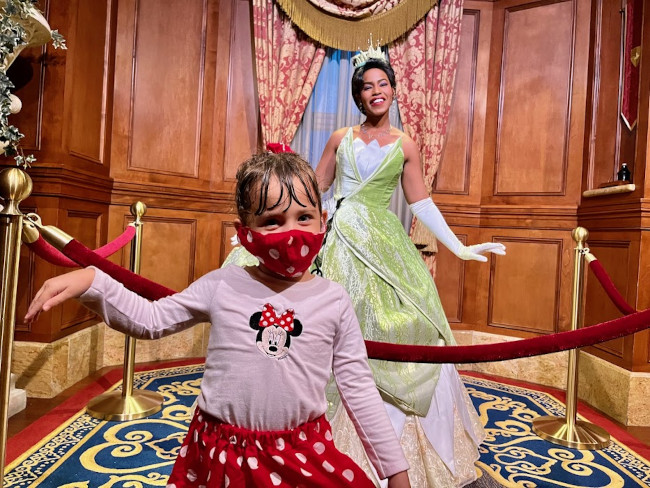 Tiana was one of the princesses available when we went. Photo by Dani Moritz

The best place to check availability is through the My Disney Experience app. 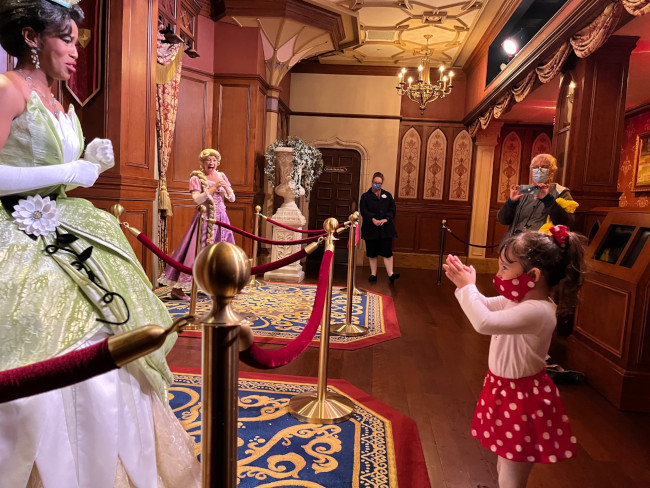 No PhotoPass photographers mean you’ll need to have your camera ready to capture moments like this. Photo by Dani Moritz

Likely because the actual character sightings occur in relatively small spaces, PhotoPass is not currently available through these character experiences. You can, of course, take all the photos and videos you like yourself.

I was a little bummed to learn this as I love taking advantage of PhotoPass (my daughter poses better for photographers than me!), but it’s a drawback I’m very much willing to accept. 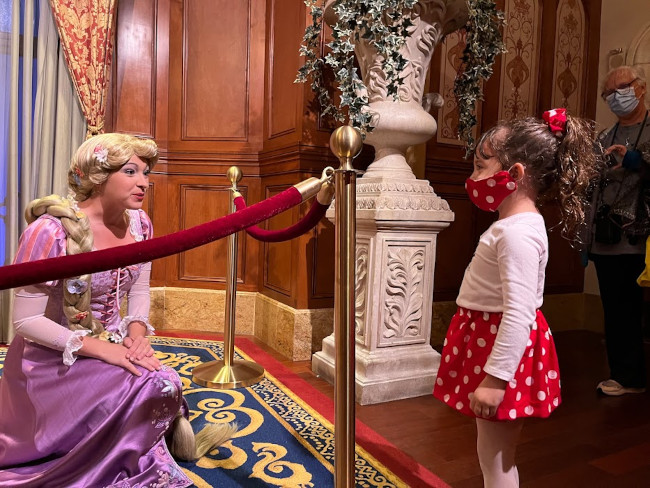 Modified character sightings at Disney World? Totally worth it. Photo by Dani Moritz

So, are these new character experiences different? Absolutely. Do I miss the days of old where she could run into Mickey’s arms and hold hands and dance with Cinderella? Without a doubt.

But after a year and half of meet-and-greet closures, these new experiences are heartwarming and downright magical.

And until it’s safe to kiss Pluto’s nose again, my kiddo and I will be perfectly happy loving our favorite characters from a distance—and we hope you will, too.


Not sure if you’re going? You can just get more information about a potential Disney vacation.