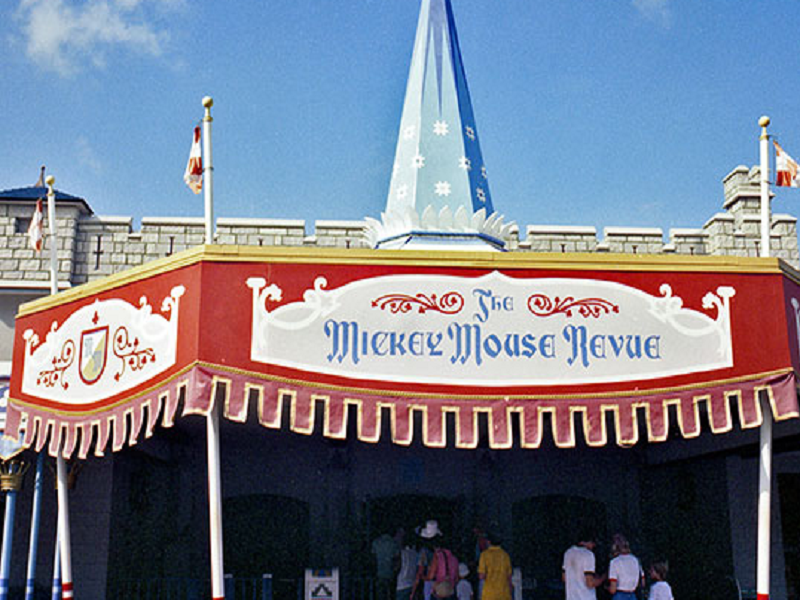 On September 14, 1980, the Mickey Mouse Review closed for good. Here’s what happened during the show…

Today it’s hard to imagine witnessing an Audio-Animatronic at Magic Kingdom without first boarding a boat, car, or Doombuggy. But back on the opening day of the park in 1971, there was a place where guests could get their fill of Audio-Animatronic machinations in one sitting: Mickey Mouse Revue.

75 Audio-Animatronics made up the cast of the star-studded show, putting it on par with the amount of moving characters you would see in a ride like Splash Mountain or Pirates of the Caribbean today. It was a place to see most of your favorite classic Disney characters in one spot, take a rest, and escape the Florida sun. 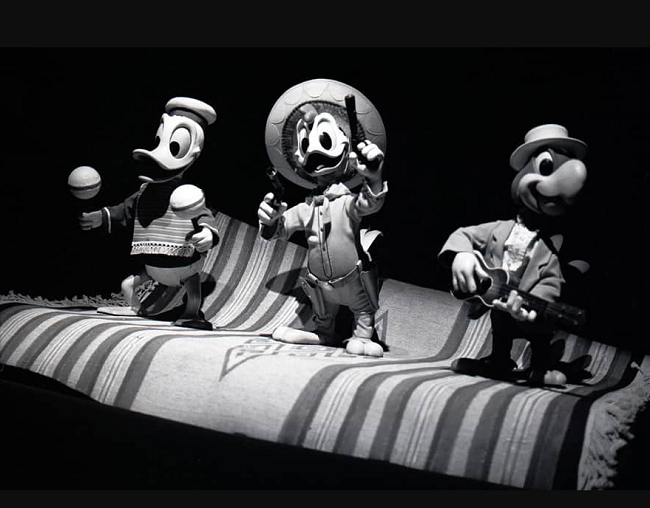 When Fantasyland opened at Magic Kingdom in 1971, the Mickey Mouse Revue was among a few Fantasyland rides available to the first-ever park guests. It was located in what is now Mickey’s PhilharMagic theater. 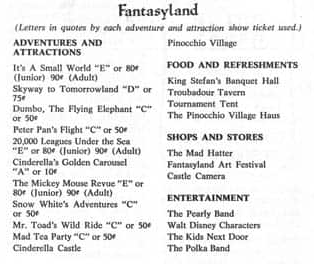 From the Walt Disney World New circular in 1971. Image via Disney Parks Blog

Mickey and friends were available to meet here and there in the parks, but the Mickey Mouse Revue was a spot to be treated to a lot of characters at once.

Pluto and Kaa from The Jungle Book also shared the stage, but I’m not sure they had an instrument. Bill Justice, Disney Legend, programmed the Audio-Animatronics and designed their movements.

The first part of the concert features Mickey’s orchestra playing a super jam of Disney film hits. These flow into one another, and include (in order), “Heigh-Ho,” “Whistle While You Work,” “When you Wish Upon a Star,” and “Hi-Diddle-Dee-Dee (An Actor’s Life For Me).”

After this first jam session, all goes black and a spotlight lands on the curtain. The silhouette of The Big Bag Wolf heralds our next performance, with the curtain rising in a different area of the stage (similar to Country Bear Jamboree). It’s the Three Little Pigs singing “Who’s Afraid of the Big Bad Wolf?”

A curtain reveals Snow White next, and she sings a unique version of “I’m Wishing” while surrounded by deer, bunnies, and other woodland friends on a large log. This version of the song included additional lyrics, “Tell me wishing well, will my wish come true? With your magic spell, won’t you tell me what to do?”

The spotlight then shifted to The Seven Dwarfs who sang “The Silly Song” and played various instruments.

Next, the curtain raised on Alice, standing in Wonderland among the flowers in her shrunken form. The flowers tower over her as she sings “All in the Golden Afternoon.”

Next, the Three Cabelleros, Donald, Panchito, and Jose Carioca took the stage for a lively rendition of their theme song, which you can now hear on the Three Caballeros ride at EPCOT.

The storybook tales continued, with a scene of the Fairy Godmother, who sang “Bibbidi Bobbidi Boo” next to Cinderella in her daily rags, which magically transformed from into her gorgeous ballgown. Then, another silhouette scene is projected onto the curtain as she dances with her prince to “So This is Love.”

Next, Brer Bear, Brer Rabbit, and Brer Fox start a rousing rendition of Zippidy Doo Dah, to which the rest of Mickey’s band join in. Guests will also see the characters from other scenes join in, with Cinderella and her Prince singing right along.

The show ends with a slow version of the Mickey Mouse Club song spelling out his name. Mickey thanks the band, and the curtains close for the last time.

When Did Mickey Mouse Revue Close?

On September 14, 1980, the Mickey Mouse Revue played its last show. It had quickly become a fan favorite, and even a tradition for guests visiting Magic Kingdom. Paying Mickey and the band a visit was a great way to beat the Florida heat and refresh your memory on the feels that Disney songs can inspire in a die-hard fan’s heart. It couldn’t be the last show, right?

It wasn’t. Mickey said the show must go on, and Imagineers moved his band across the globe to make it happen.

When Tokyo Disneyland opened in 1983, a familiar Audio-Animatronic hit the stage. Mickey struck up the band in their new location, right next to Cinderella Castle in the heart of Fantasyland.

Each character was spruced up for the transition. At the time, Jim Cora, then vice president of operations at Tokyo Disneyland said that the Audio-Animatronics in the Mickey Mouse Revue “represent the state of the art in Disney technology.”

The show was largely unchanged, with a screen presentation with an introduction in Japanese that talked about Mickey’s history as an entertainer on screen. The film transitioned to shots of characters dancing and interacting with guests in the parks, then on to the concert show, but this time, all of the songs and speaking parts were presented in Japanese.

The Mickey Mouse Revue played in Tokyo Disneyland until its closure on May 5, 2009. But again, Mickey would play on! This space, too, was taken over by Mickey’s PhilharMagic, just as in Magic Kingdom.

Do you remember Mickey Mouse Revue? Share your photos and memories with us in our Facebook group.