How to Meet Disney Artists at WonderGround Gallery in Downtown Disney 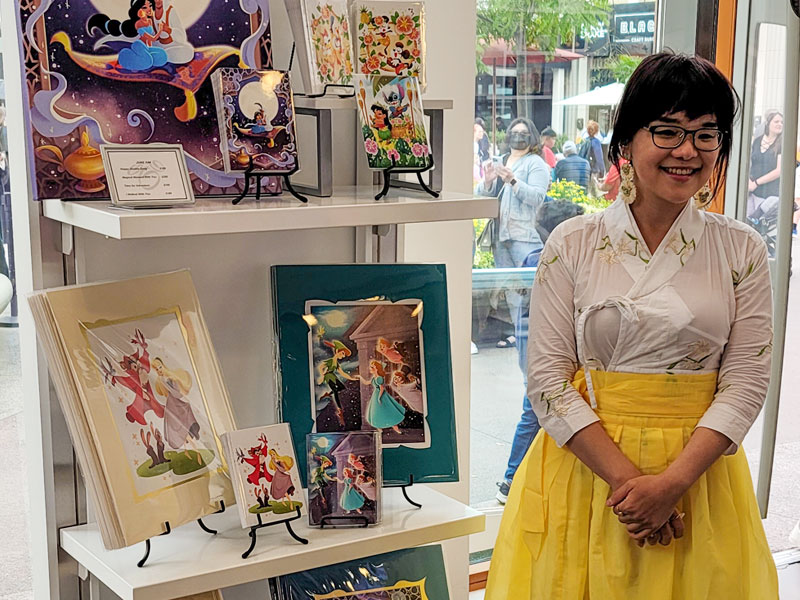 What to ask and how to meet Disney artists at The WonderGround Gallery at Downtown Disney.

Last month, artists and admirers alike gathered at WonderGround Gallery at Downtown Disney to share their love for Disney-inspired artworks.

Not only were guests able to get an up-close look at the artists’ work, but they also had the opportunity to meet the creatives, purchase original pieces inspired by their favorite stories and characters, and get their purchased pieces signed by the artists! 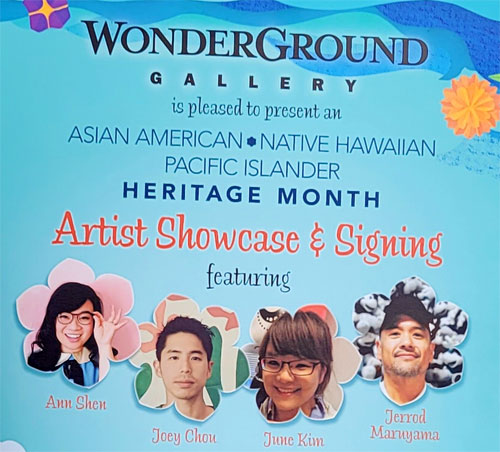 It’s not every day that you meet such amazing talent, so we sent WDW Magazine reporter David Bellamy to the artist’s signing to get a better idea of what it’s like to meet the greats. 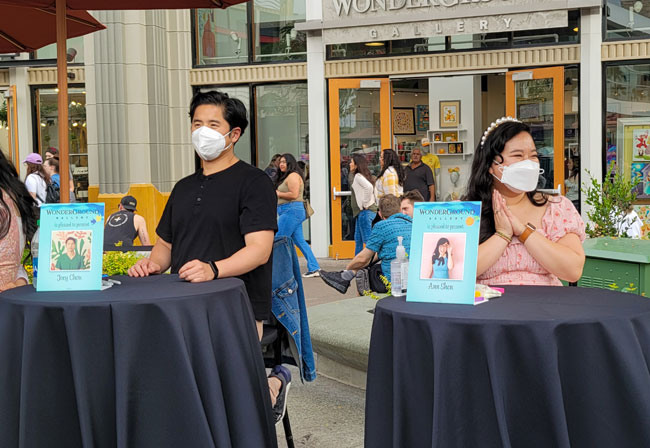 May was a special month for Disneyland’s artist signing because it marked Asian-American and Pacific Islander Heritage Month. This dedicated month is a time to honor cultural history while uplifting the influential figures of today.

How to Approach Artists at a Signing

How is an artist’s signing set up at WonderGround Gallery? Do you just… walk up and say, “hi?”

Turns out, it’s just that casual!

Our reporter, David Bellamy said, “Some artists will have people come up to their booths, and other artists will be sitting patiently waiting, and a group will come up to that artists and just start conversing and having a great time.” 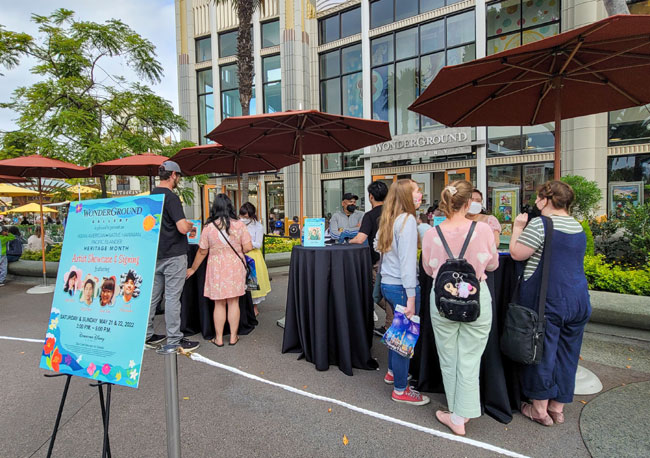 What Should You Say?

David said that during the artists’ signing, fans would approach the artists, ask them to sign bought pieces, and really just talk to them about the pieces and their inspiration. It’s basically like talking to your friends about your favorite artist… except… it’s the artist!

David told the artists how much he admires their work and thanked them for taking the time to chat with him. If you have an artist whose work has brought you joy, that’s really all you need to say!

As you can see from David’s photos, the plaza in front of WonderGround Gallery made the perfect venue for a sunny California day. Both the guests and the artists were ecstatic to meet one another in such an intimate setting.

Let’s get acquainted with the creators that David was lucky enough to meet in May! 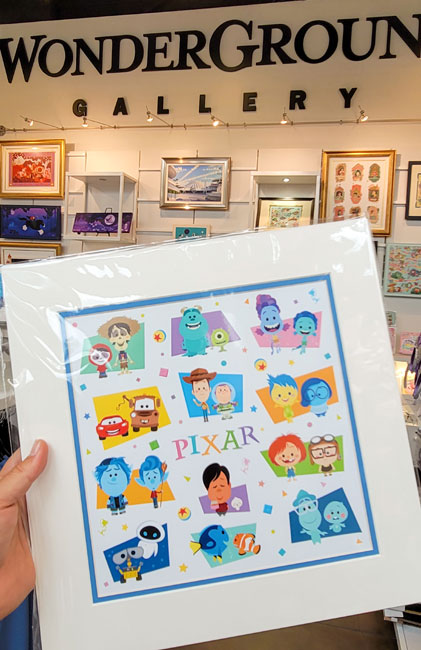 Jerrod Maruyama is an illustrator from San Jose, California. Take one look at his work and you can see that his style is all about clean lines, bright color palettes, and all things cute!

Maruyama described his style as, “All cute stuff! As cute as it can be. An exaggerated sort of cute.”

Don’t be surprised if you’re getting déjà vu looking at his work—we bet you’ve seen Maruyama’s work throughout the parks before. He’s designed several Disney products including storybooks, figurines, pins, housewares, and accessories – you name it!

David asked Maruyama how he got started drawing for Disney, “Disney found me! I posted my work on Instagram a long time ago and they approached me when this gallery was first opening, which was 10 years ago this summer. I got very lucky!” 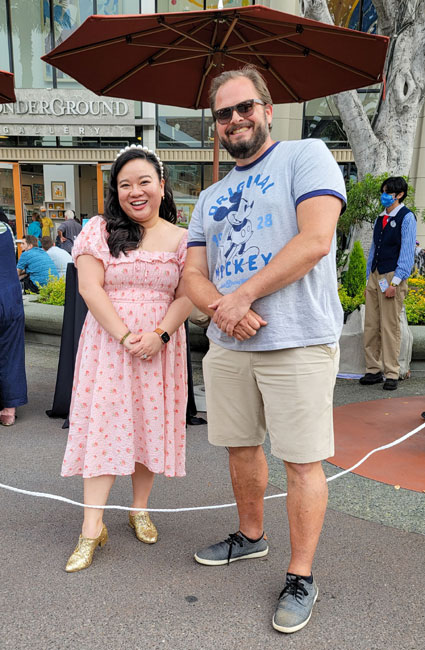 Ann Shen is a Los Angeles-based illustrator and published feminist author whose work highlights great women of past and present.

As you can see, her work is, as she describes it, “magical!” She employs winding brush strokes, soft lines, and whimsical hand lettering in a way that brings that warm fuzzy Disney feeling to life.

Shen told David that she was inspired by Little Golden Books, children’s book illustrations, and of course, Mary Blair. 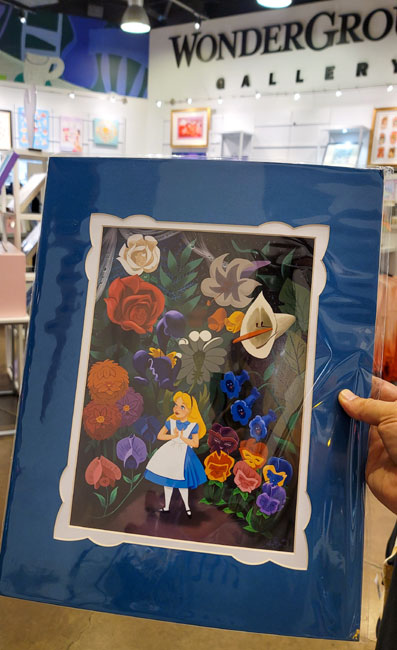 Before drawing for Disney, Shen says she was, ” …doing a lot of personal artwork that was inspired by things I love. Mermaids, Tiki culture, and things like that.” Shen told David that after six years of working as an artist, she was approached by WonderGround Gallery at a comic convention in 2016.

Shen said about meeting fans, “It’s an incredible opportunity to meet people who are excited about the same things I am. That’s kind of the best part: We’re always looking for connection and community.” 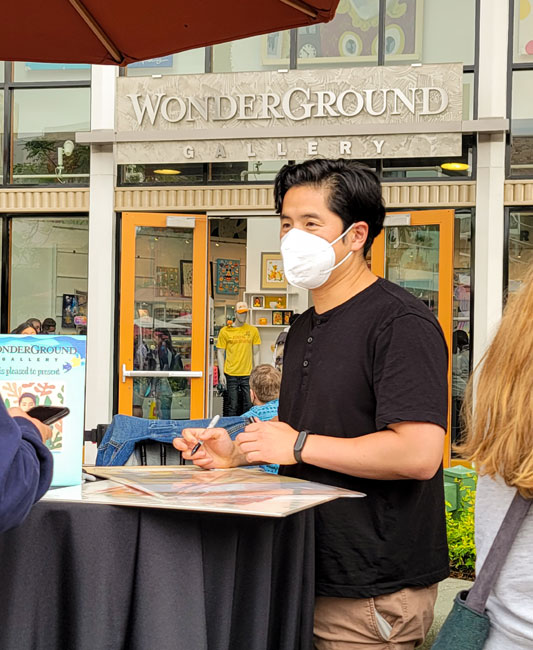 Joey Chou is a Taiwanese illustrator and animator who grew up in Southern California.

His artwork uses color theory and strategic composition to immerse viewers in an alternate universe where their favorite fictional worlds take on the form of a mid-century mod style. 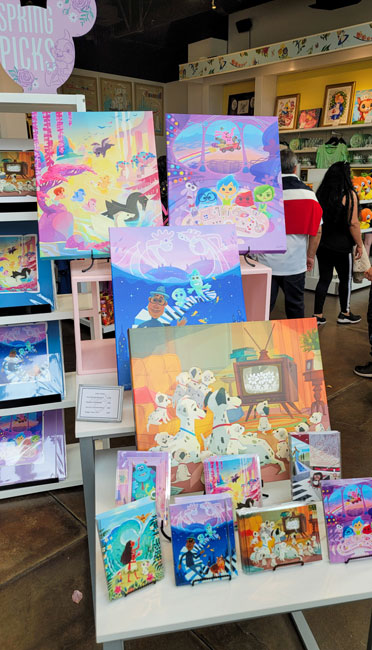 Chou said he credits 1960s illustrators as his greatest influence, which is clear in his extensive work for Disney Press. 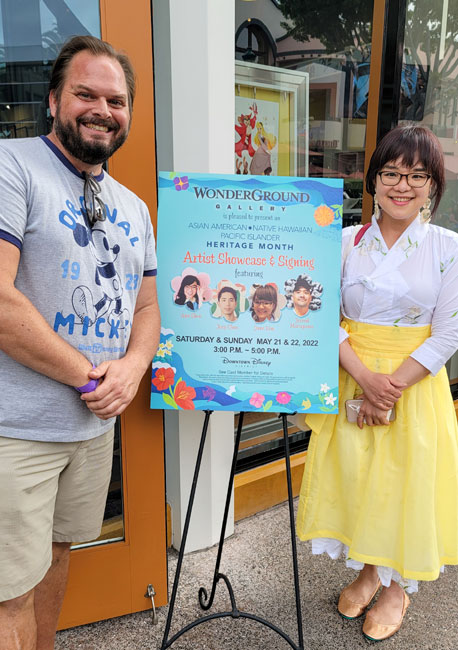 Artists love to pose with their fans! Photo by David Bellamy

June Kim is an illustrator, animator, and visual designer who resides in San Francisco, California. 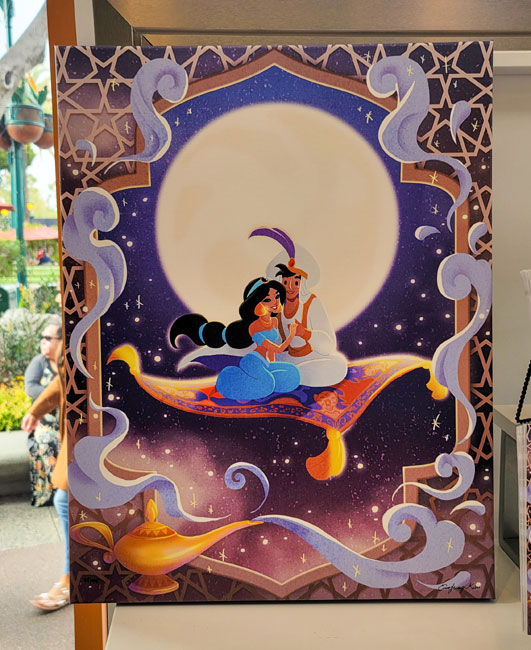 Kim’s vibrant work is emotive and ambient, often focusing on Disney characters and environments that showcase their personalities and relationships. Her portfolio is extensive and impressive, including work with Google and Funko! 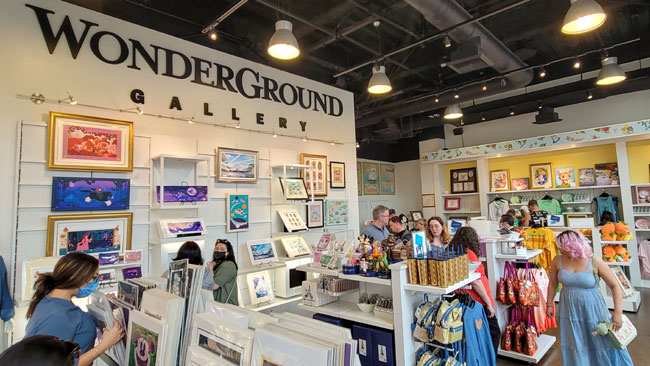 WonderGround Gallery is a spacious venue in the heart of Disneyland’s Downtown Disney that acts as a marketplace for fashion, home goods, collectibles, and of course, artwork! Guests can find Disney-inspired merchandise that pays homage to characters, rides, and stories of both yesterday and today in chic, subtle, and unique ways in this shopping hub.

After undergoing a brief refurbishment last year, the gallery is back and better than ever with a fresh, bright interior where shoppers can find the cutest Disney-inspired items that bring touches of magic home with them.

The pieces featured in WonderGround Gallery reveal the wonder of Disney through an artist’s eyes – and each creator has their own unique style and love for Disney that shines through in their work. 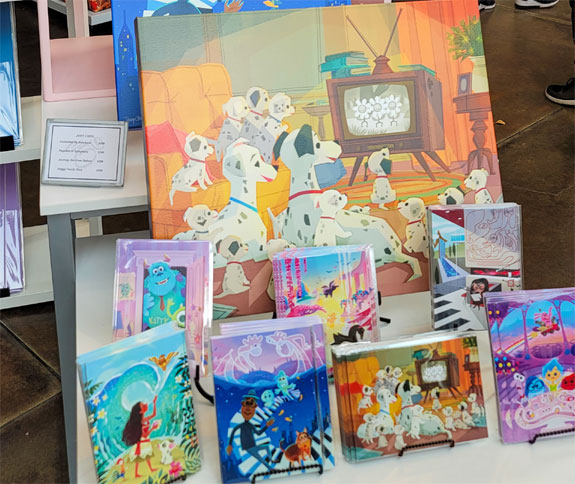 If you’re getting a touch of FOMO reading about David’s meet-and-greet experience, we’ve got you covered. There are tons of opportunities to view art at Disneyland Resort, and it isn’t your last chance to meet the artists behind the work either!

Art galleries at Disneyland Resort include Disneyana in Main Street, U.S.A. at Disneyland Park, Off The Page in Hollywood Land at Disney California Adventure Park, and of course The Wonderground Gallery at Downtown Disney.

This month, catch these artists at your favorite Disneyland Resort galleries for June’s artist showcases: