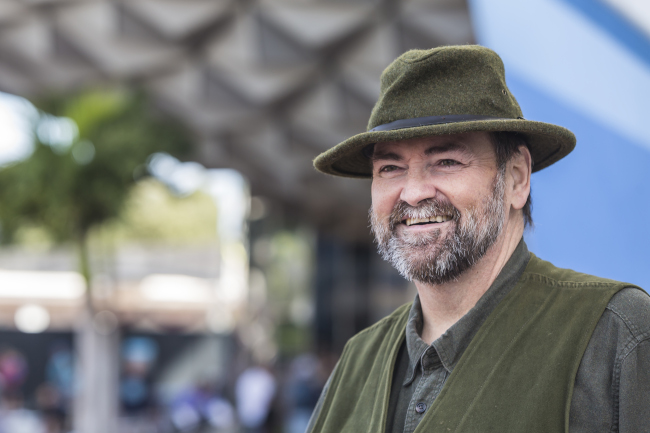 Between the churros, the Dole Whips, and the thematic cupcakes, Walt Disney World is certainly not lacking in sugar, but the recent sweet addition of one farmer’s maple syrup at EPCOT has filled a void Disney-goers never knew they needed.

He was creating a buzz at Green City Farmers Market and at restaurants with his maple syrup, which he produces with his wife Angie at Burton’s Maplewood Farm in Medora, Indiana.

Whether on pancakes, in desserts, stirred into cocktails, or glazed over veggies, this stuff is unlike any syrup you’ve drizzled before, and it’s been sweeping the country ever since.

In 2019, Burton made his biggest move yet when he started selling maple syrup at EPCOT International Food & Wine Festival.

In a magical world filled with sweets, he’s making a name for himself with pure maple syrup, earning fandom the same organic way he did in Chicago.

To learn more about working with Disney and introducing his products to a colossal new audience, I chatted with Burton to get all the syrupy details.

How did you first get into maple syrup?

Burton: Angie and I owned a systems integration business, and our technician Joe asked to knock off early one day.

That day turned into two days, and three days. I asked what he was doing, and he said he was helping the Millers collect sap.

I said, ‘you seemed pretty jazzed up about it, can it be that fun?’ I was mesmerized by the whole thing — the lost social aspect of everybody coming together, collecting sap, taking it back to the sugar house, and reducing sap into syrup. 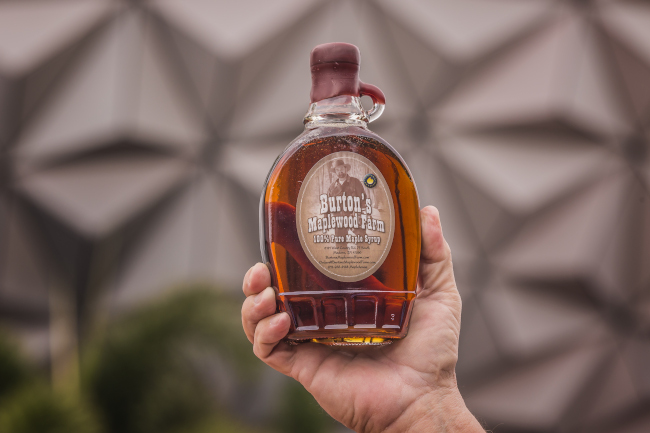 That’s how it got my interest. I counted trees at our farm, and saw we had plenty of maple. I built a maple house, and bought an evaporator a year later.

We started making maple syrup, and going to Chicago to get involved with the Green City Market, initially making two trips a week. We also met a lot of chefs in Chicago, who started using our product, and we developed a following with people that came to the market.

Over the years, I thought if we could do this here, why can’t we do this in other parts of the country?

We did an event in Vail, Colorado, and the local newspaper did a story about us. We had also supplied our maple syrup to chef Art Smith because he was hosting Oprah Winfrey’s brunch for wrapping up her show, and they wrote about that as well.

We started getting inquiries from other markets in Colorado, so the next year we came out and got involved with a couple farmers markets. The wheels started turning; why can’t we be in different locations throughout the country with local people running our booths?

What makes your maple syrup unique?

Burton: Collaborations with distilleries around the country. We age maple syrup in their used barrels and then fire-infuse those barrels.

We use heat to warm up the barrel wood, and chase the ‘devils cut,’ which is the liquor that’s trapped in the oak wood. It infuses into the syrup without actually pouring liquor into the syrup.

We’ve coined the phrase ‘fire infusion,’ and that’s what imparts barrel flavors into the syrup. 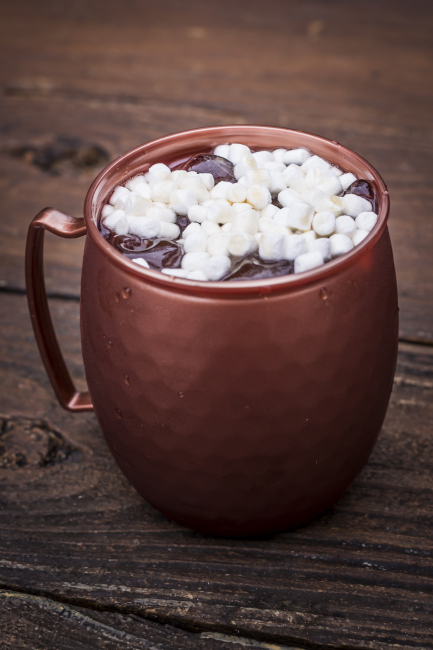 How did you get your maple syrup into EPCOT?

Burton: When we went out to Colorado, I met Stephanie Sherman, who is the sister of Chicago chef, Bruce Sherman.

Because of connections she has with a lot of different people, she was telling me about a fella who was involved with Food & Wine at Disneyland. I reached out to that vendor, and he gave me insight into working with Disney, but when I reached out to Disneyland, the timing wasn’t there.

So I reached out to Disney World and EPCOT. Several months went by, then I got a call from Disney asking if we’d be interested in sponsoring Party for the Planet at Animal Kingdom, and having our syrup showcased at Tiffins.

They invited us down, and we were treated exceptionally well at Tiffins. They even created some special chocolates for us using our maple syrup.

A month later, we were asked if we’d like to sponsor the International Flower & Garden Festival at EPCOT. We said absolutely but asked if there would be an opportunity to sample and sell our maple syrup.

I was told that Food & Wine would be the perfect match, and so our syrup was used in several locations during Food & Wine in small dishes, and we were able to participate in the festival.

One thing to note is the Executive Chef of Animal Kingdom was chef Al Youngman, and he requested someone at Disney reach out to us.

How have you navigated everything with COVID-19 closures this year?

Burton: Disney in Orlando raised a few eyebrows out in Anaheim and we were invited to participate in Food & Wine at Disneyland.

We put together a team and came in sampling and selling our maple syrups before Disney closed their gates because of COVID. Like everybody else, we were on hold.

I decided to bring everything back to the farm, and then we were approached by EPCOT asking if we’d like to be involved. We were sponsoring the 2020 International Flower & Garden, and during that event Disney World closed, so there was a lot of inventory that we had down there. We parlayed that over to Food & Wine, and we’re there now. 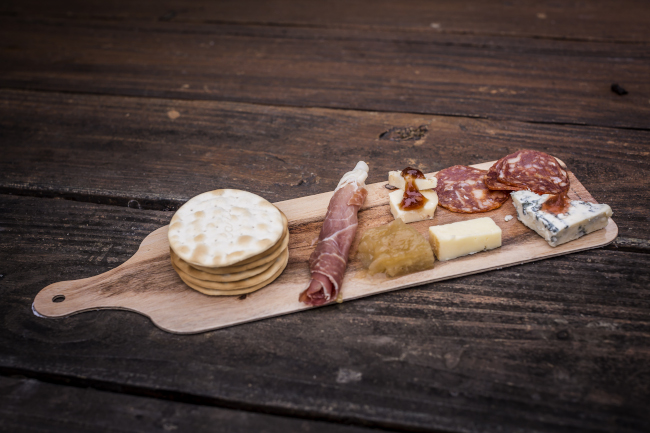 How was your first year at the festival? How is it going now?

Burton: It went well last year, but it’s going surprisingly well this year with the restrictions in place.

I think guests going to EPCOT are maximizing their experience for the shorter period of time they have at the park. Just being involved with the EPCOT folks, they make it so easy to work with them.

One of the things Disney is very particular on is signage. They’ve been so good to us in terms of creating signage for us in their Imagineers department.

Being in the World Showplace, it’s a very big space and I wanted to know if we could put a vertical sign in place. I sent them an example, and the culinary team gave us approval.

It’s great that they allowed us to have that sign, so when people walk in, they look over and can see this vertical sign and come over and sample our maple syrup.

People have come back this year that saw us last year. Last year was our first time, so people were being introduced to us, whereas this year people looked forward to seeing us, and we’re getting bloggers talking about us and the maple syrup.

That’s helped with online sales, which have increased quite a bit. (Check out Burton’s online shop here!)

What are the challenges of being at the festival?

Burton: We want to make sure logistically that we have plenty of inventory on-hand. We’ve only done it two years, but it’s been extremely smooth because of the experience we had last year.

The biggest challenge is the fear of the unknown, but we’ve been able to meet those challenges and pivot. What’s important is that we’re meeting the Disney standards.

I attribute a lot to Carrie Meyer and the ‘Maple Mavens.’ It’s an entire female staff that we have this year, and everybody is rock solid and very responsible about covering their shifts and practicing social distancing while sampling our syrups.

What have been the biggest highlights?

Burton: Being featured on menu items at Disney has been great. The creativity of their culinary team is amazing, from the cocktails they serve with our maple syrup to the charcuterie boards. 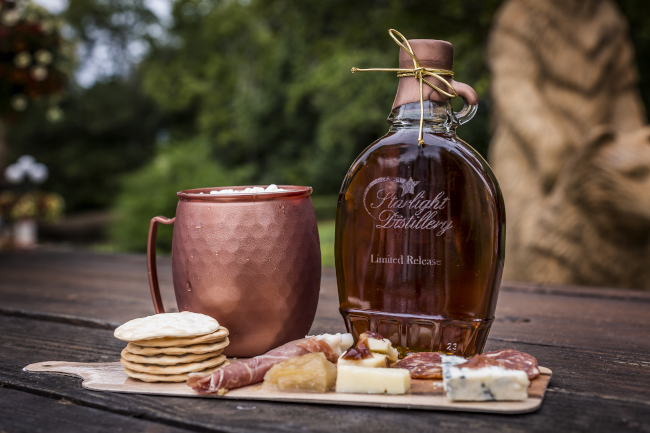 Chefs are giving great attention to how maple syrup is not just for pancakes anymore.

Any plans for more work with Disney?

Burton: There’s been a few things we’re talking about, but what I can say is that I am interested in seeing if there are opportunities for supplying syrup to other Disney properties, whether that be in Europe or Asia, as well as Disney cruise ships.

COVID-19 has really put the brakes on it for everybody, so it’s hard to have those discussions right now, but that’s something that I would like to expound on.

A lot of this has happened organically in terms of our relationship with EPCOT, but it’s also because of chef Al Youngman. We really appreciate the support he’s given us.

Wow, we really love hearing from our favorite Disney magic makers! Sign up for our newsletter to get exclusive news and interviews just like this delivered directly to your inbox every week!

Matt Kirouac is a travel writer, podcaster, and author, currently living in an RV with his husband Brad and their mini dachshund Finn. His favorite places are national parks and theme parks, especially Walt Disney World, which he’s been visiting since he was a kid. Nowadays, he’s an Annual Passholder, and frequently discusses Disney on the podcast he and Brad host together, Hello Ranger.

Matt Kirouac is a travel writer, podcaster, and author, currently living in an RV with his husband Brad and their mini dachshund Finn. His favorite places are national parks and theme parks, especially Walt Disney World, which he’s been visiting since he was a kid. Nowadays, he’s an Annual Passholder, and frequently discusses Disney on the podcast he and Brad host together, Hello Ranger.