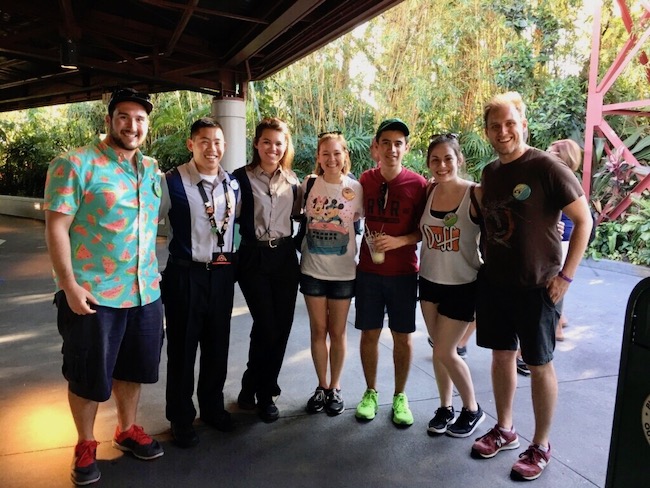 Disney World isn’t just for adults… and here’s a very magical memory to help prove that!

I’ll admit, when I told people I was going on a trip with friends to Walt Disney World, many scoffed.

This type of judgment around adults at WDW is incredibly specific, and I internalized it a little too deeply. How wrong I was.

Flashback to April 1, 2017. It was my (now) husband’s birthday, and he insisted on spending it at Disney’s Hollywood Studios.

Many people tried to talk us out of this, as even the truest Disney fans place DHS on the lower tier (of their own personal) parks roster, especially for a celebratory occasion.

How wrong they were.

We turned around to see it was none other than one of the famed WDW Janitors! 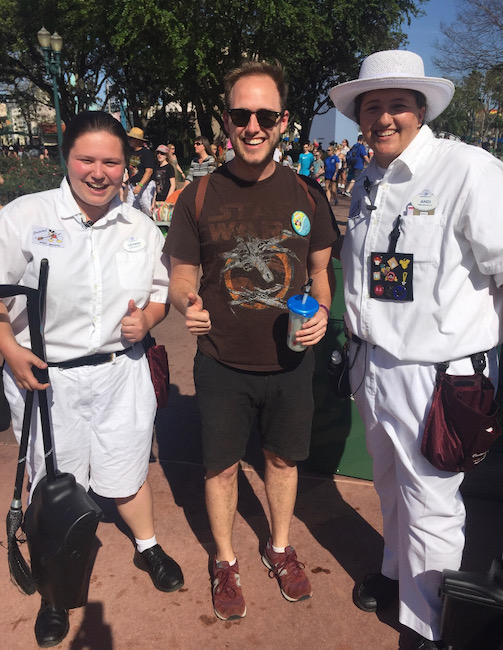 Tom with the WDW Janitors. Photo by Amy Berger

She asked if Tom had received his birthday ice cream yet. “No..?” Tom replied. “Follow me!” the Cast Member said while leading us to the nearest ice cream cart. She announced it was Tom’s birthday, and he was immediately handed a Mickey Premium Bar, “on the mouse.” 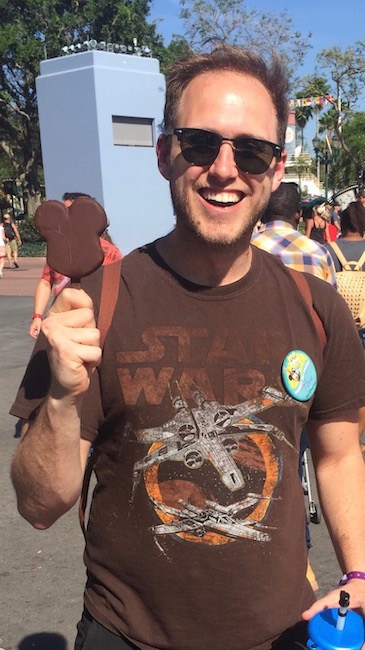 But it didn’t stop there…

The Orlando sun was beaming down, so we headed to Rosie’s All-American Café for a Lemonade Slushy to cool off.

Déjà vu occurred when the Cast Member at the cash register asked us if Tom had enjoyed his birthday dessert yet.

He kindly told them he had already been treated to a Mickey Premium Bar. “Perfect, that means it’s time for your cupcake,” they replied. 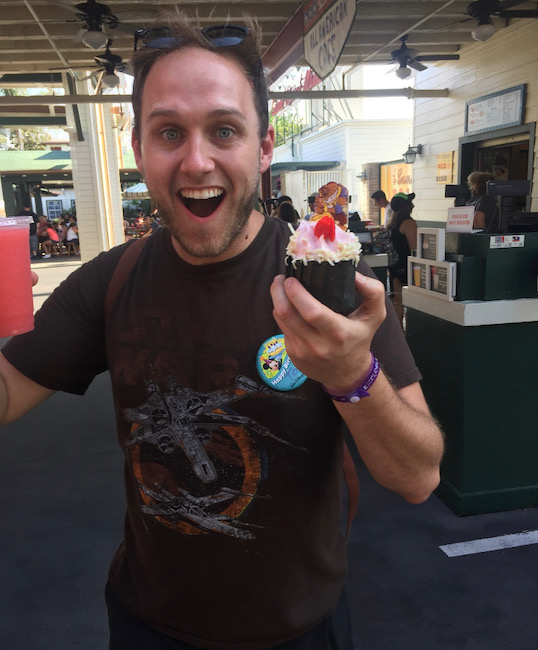 Beauty and the Beast themed cupcake! Photo by Amy Berger

Later, we headed to Star Wars Launch Bay. After snapping pictures with Kylo Ren and Chewbacca, Tom hung back to check out the concept art, while our friend, Ken, and I decided to get some fresh air.

Within minutes, we found ourselves a new friend, Matt, of the Disney College Program.

We shared stories on our love for all things Disney, and he asked, “if you could do one thing today, what would it be?”

We offered insight that Tom’s favorite movie was Indiana Jones and how we would be seeing The Indiana Jones Epic Stunt Spectacular! later that afternoon. “Great!” Matt said. “Meet me at the top of the ramp when you enter the theater. Tom’s going to be in the show!”

Our group with Matt! Photo by Amy Berger

Cut to a few hours later, and at the top of the ramp was Matt. He truly made us feel like family because we were in the family section of the show.

Literally. They sat us directly behind the children of the actress who plays Marion! 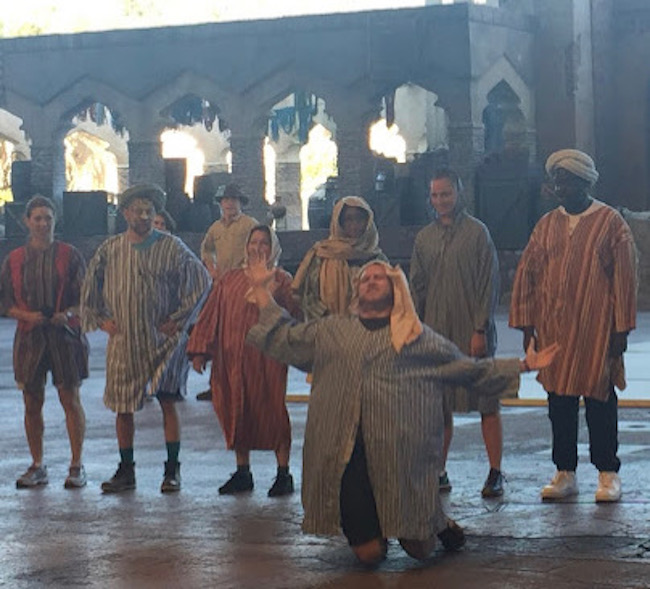 The show began, and not only was Tom brought on stage, but he was also given his own death scene.

For a one-night-only performance, “Tom’s Death Scene” played to a 2,000 seat theater. They say “never meet your heroes,” but I can confirm Indiana Jones and Marion are the exceptions. 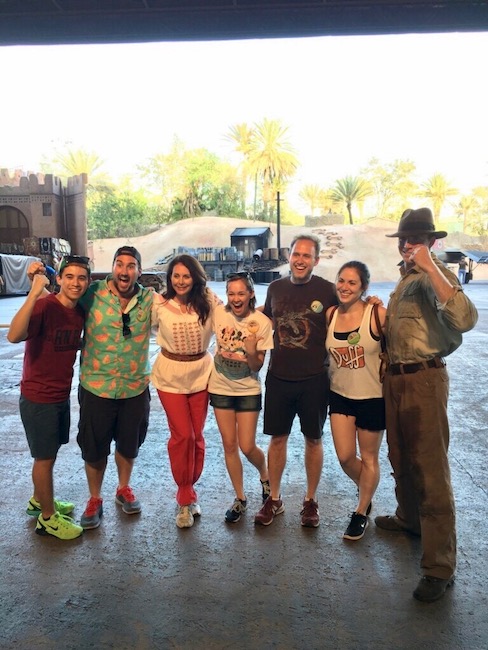 We found Matt after the show and thanked him for everything.

“I actually have one more thing I want to do for you,” Matt said. “Meet me here 15 minutes before the fireworks.” Umm, sure. Yes. Absolutely. Matt got back to work, and we headed to lunch at the Sci-Fi Dine-In Theater Restaurant.

It really is a small world after all because our server had been our Lyft driver earlier that week!

After a hilarious reconnection, he made sure we had a meal fit for a birthday king. He hooked us up with Fried Pickles, double orders of Buffalo Chicken Strips, and an Orbiting Oreos Milkshake. 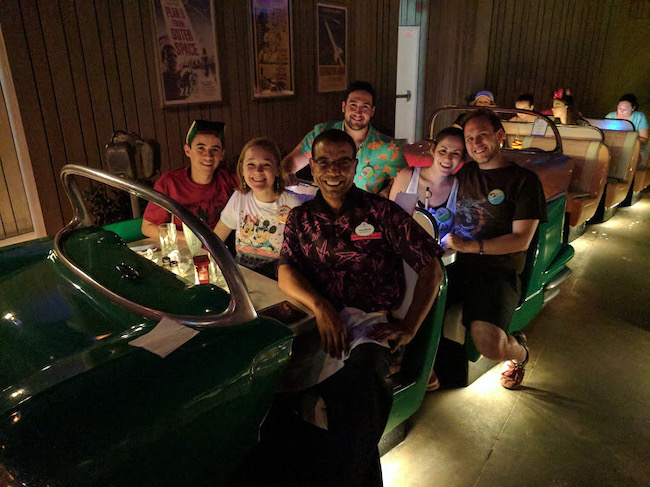 Afterward, we decided to walk off our feast with some exploring. We asked a Cast Member to take a group photo and then talked to her about how her day was going and how much fun we were having.

Before we left, she said, “you know what, I don’t think adults get enough magic around here” and asked us what our favorite ride at the park was.

Without hesitation, we simultaneously said, “Rock ‘n’ Roller Coaster!” Faster than you can say, Supercalifragilisticexpialidocious, she had a paper FastPass for our entire group to get on the attraction.

The wait time for RNRC had been roughly 130 minutes all day, so we never expected to get on it before park close. How wrong we were! 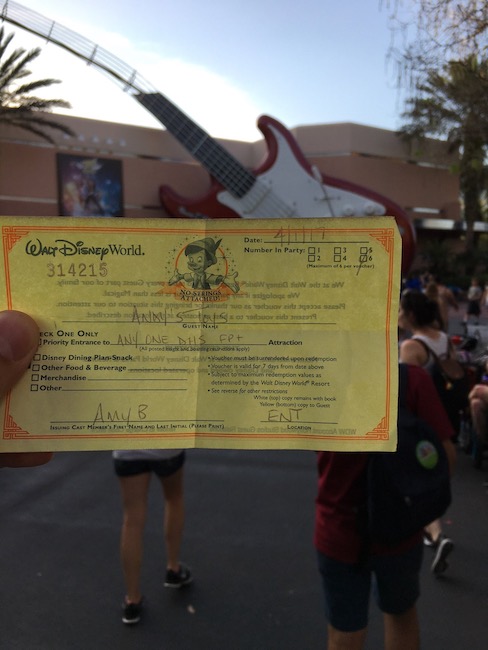 There’s so much magic at Disney! Photo by Amy Berger

Feeling like rock stars, we got off the coaster and met Matt for our final surprise.

This DCP MVP got us into the reserved viewing area of Star Wars: A Galactic Spectacular. I’m sure the combination of nostalgia, amazement, and exhilaration all contributed, but seeing that show, with that view, was a once in a lifetime event we now all cherish. 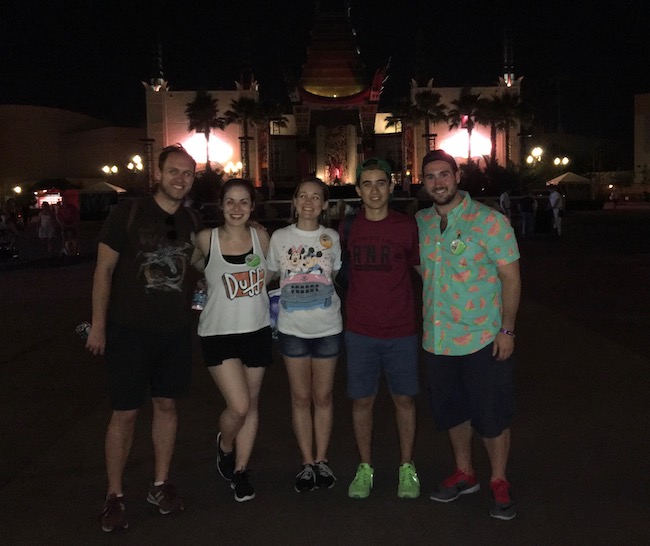 The end to a very magical day! Photo by Amy Berger

I find the people who don’t believe in the magic of WDW focus on one negative memory they experienced.

Their opinion is formulated by a long, hot ride queue, or a child on their parent’s shoulders blocking their parade view, or the expense.

But I think Walt Disney World is about believing in something bigger than yourself.

Even as adults, we followed the fun, became inspired by the Imagineers, and invested in conversations with Cast Members, which allowed us to meet the people behind the pixie dust.

If someone tells you otherwise about the magic, prove them wrong.

Want to make a magic memory of your own? Contact our friends over at Destinations to Travel and they’ll give you a totally stress-free Disney World planning experience! 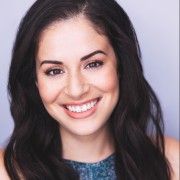 Amy Lynne Berger is a New York-based actor, writer, and comedian, with a Disney World-based soul. Favorite credits include performing/writing for Disney+, Disney Food Blog, Hulu, and the Upright Citizens Brigade. For more about Amy, you can check out her website or follow her on Instagram and Twitter!