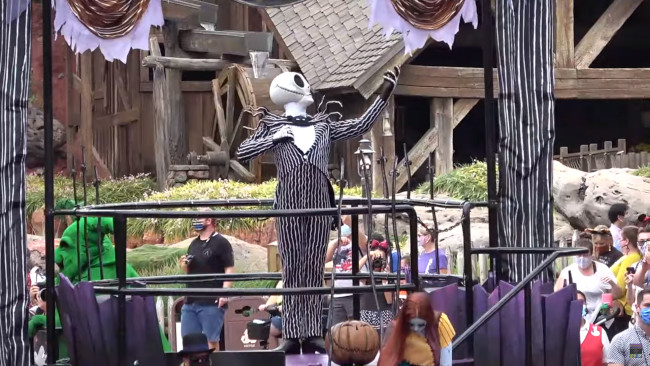 One of the best parts of being in Disney parks is hearing the start of a Disney parade.

I remember rushing to the taped lines along the parade route with my chosen Disney Treat growing up (tops on my list this season would be the Not So Poison Apple Cupcake at Pinocchio Village House) and waving to my favorite Disney characters as they passed.

They were always a reprieve from waiting in lines, and the interactivity and music made everything worthwhile.

This season, Disney has launched a variety of new Halloween-themed parades to entertain Disney fans of all ages. 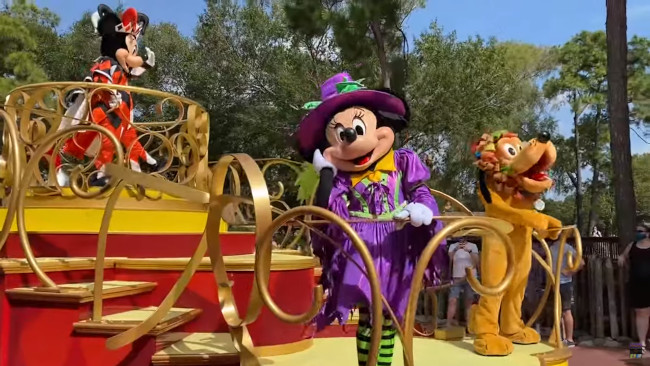 The gang’s all dressed up for the spooky occasion- even Pluto! Image courtesy of MouseSteps/JWL Media

Magic Kingdom in particular has even more surprises up its proverbial sleeves this Halloween season in the form of four new themed cavalcades!

These cavalcades are the newest addition to the revamped Halloween experience after the unfortunate cancellation of Mickey’s Not-So-Scary Halloween Party (some of us still haven’t recovered), and they are running until the end of October.

Take a look below to find out which Halloween Cavalcades parade through Magic Kingdom this month! If you are not able to see them in person, be sure to click on the links to watch them virtually!

As the name suggests, you can’t go wrong with highlighting the villains. With Gaston leading the way, this cavalcade has the most incorporated Disney characters in the lineup.

You’ll be glad to hear that Disney Villain mainstays like Maleficent, Jafar, Captain Hook, and the Evil Queen are showcased. Look closely and you will see that The Big Bad Wolf, a new character to the villain lexicon, is walking alongside the Queen of Hearts and Goob!

The Disney Villains “Good To Be Bad” Halloween Cavalcade runs five days a week from Thursday to Monday (No Tuesdays or Wednesdays).

In case you can’t get enough of The Nightmare Before Christmas and the Pumpkin King during Halloween, there is no shortage of awesomeness in this parade.

This showcase has Jack Skellington, Sally, and Oogie Boogie making a scene in their Halloween’s best.

While you are able to see Jack’s Nightmare Cavalcade five days a week, note that those five days are from Saturday to Wednesday (No Thursdays or Fridays).

Mickey’s “Boo To You” Cavalcade

You always need your fill of Mickey and the gang when you head to Magic Kingdom, and this cavalcade is the guarantee for the Halloween season.

Even better, surrounding them along the way are cast members from the Not-So-Scary parade in full costume!

You don’t want to miss this one!

This little treasure is the one that my daughters had to watch (and rewatch) simply because of its cuteness!

Pooh’s Halloween Trolley is another adventure that runs every day at different times. This adorable mini-parade has all of the feels.

The costumes that Winnie the Pooh, Tigger, Piglet, and Eeyore are wearing are absolutely priceless and are perfect complements to their characters.

Other Cavalcades at Magic Kingdom

Along with the previously explored gems, Magic Kingdom also has other showcases on the daily schedule. Don’t forget to look out for The Royal Princess Processional that runs each day and A Goofy Cavalcade, operating from Tuesday to Saturday.

Whether you are able to watch these Cavalcades in person or you simply need to watch them through the above links, you will always feel the magic of Disney in these experiences!  Happy Halloween, everyone!

Does watching these videos and reading about Walt Disney World leave you wanting more? Order our print edition today,  and have the magic delivered to your door every month!