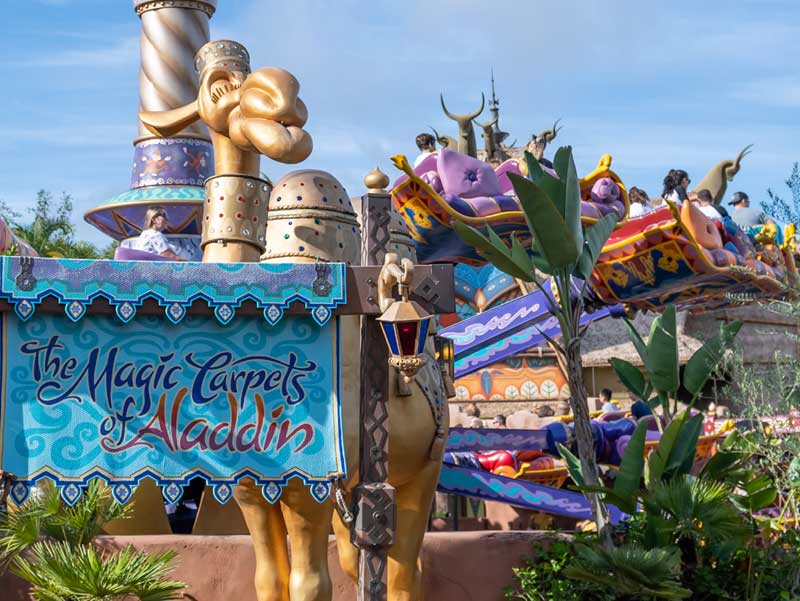 These colorful carpets are coveted by both the young and old. Get in touch with your own magic and take a spin on the Magic Carpets of Aladdin ride. Keep reading for some mystical facts about this gem of an attraction.

1. The Birth of Agrabah Bazaar

The Magic Carpets of Aladdin was the first Aladdin attraction to be created, along with the surrounding Agrabah Bazaar in the Arabian Village. The Bazaar allows guests to shop in the streets of Agrabah and feel what it would be like to live in the world of Aladdin.

Both opened in 2001 and share Adventureland with the Caribbean Plaza, home to the Pirates of the Caribbean. Since then there haven’t been any other Aladdin-themed attractions made in Disney Parks in the United States.

The Magic Carpets of Aladdin ride is made up of 16 magic carpets that are attached to a genie lamp. On the lamp, you will find the familiar faces of Aladdin characters on it. As you whiz round and round, look for Genie and Abu! 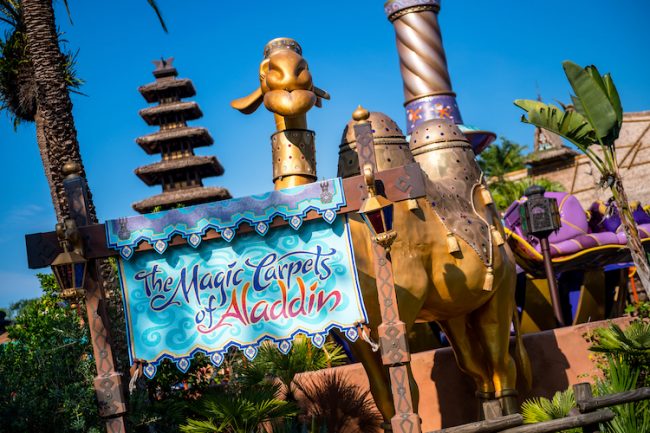 Fly the Magic Carpets of Aladdin. Photo by Cliff Wang

Just like people used to travel on the backs of camels, guests travel near and far to see the two infamous spitting gold camels of The Agrabah Bazaar.

These gold camels are special because they actually spit! That’s right—people want to be spit on by these camels. One camel is situated in front by the entrance of the Magic Carpets Ride. This camel spits on unsuspecting pedestrians. There is another right next to Magic Carpets that spits on anticipating riders.

A little Disney secret is that these camels are not controlled automatically or by a sensor —there’s an actual Disney Cast Member nearby that controls the water jets inside the camel’s mouth. What a job that would be!

But this isn’t the original gig for these camels … they have a history. They were originally part of Aladdin’s Royal Caravan parade at Disney’s MGM Studios (now Hollywood Studios). They participated in the parade from 1992 through 1995. After that, they were retired and later re-introduced in The Magic Carpets of Aladdin attraction. 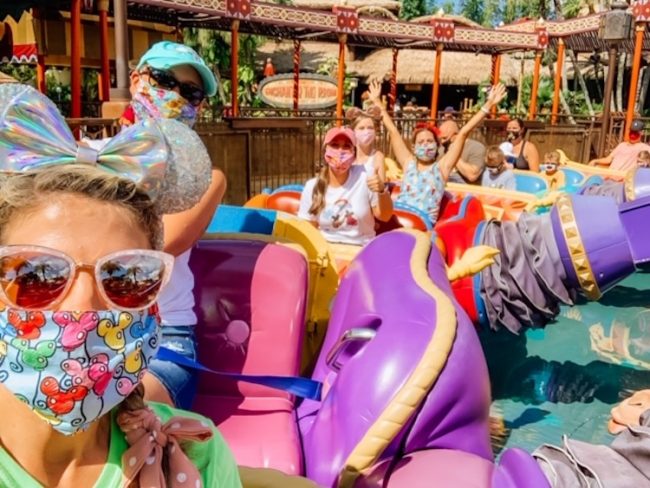 The most unique thing about The Magic Carpets of Aladdin ride is the interactive aspect. It makes the rider really feel like they are in complete control of their magic carpet.

The magic carpets have two rows of seats and each row has its own designated controls. Passengers sitting in the front row are equipped with a lever that will move the carpet up and down once the ride starts. Passengers in the back seat will be met with a scarab beetle-shaped button that when pressed, tilts the carpet forward or backward.

If you don’t want to get wet be sure to maneuver your carpet above the Camel spit-splash-zone. Fly your carpet high to avoid getting sprayed!

4. The Many Aliases of the Magic Carpets 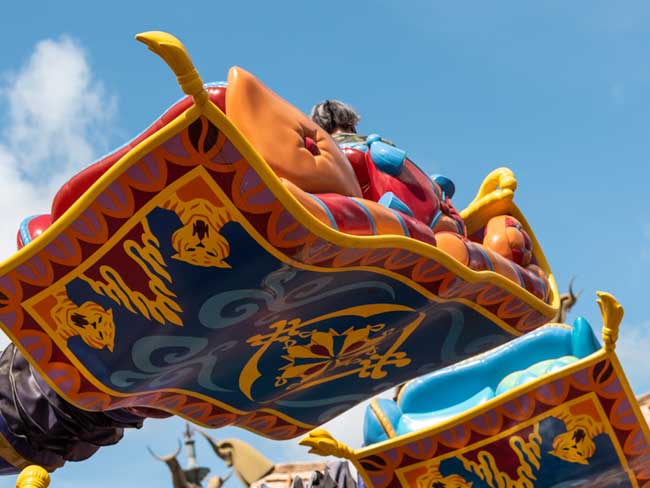 Show yourself the world as you pilot a carpet. Photo by Laurie Sapp

The Magic Carpets of Aladdin ride at the Magic Kingdom might have been the first, but it certainly isn’t the only one of its kind. There are similar magic carpet rides at both Disneyland Paris and at Tokyo Disney.

At Disneyland Paris, the ride is called “Flying Carpets Over Agrabah, or “Les Tapis Volant” which translates to “flying carpets” (surprise, surprise)! At Tokyo Disney, they switch it up and call the ride “Jasmine’s Flying Carpets”.

They have different names, but they are essentially the same ride. Although, there are some minute differences to note.

Try to ride all three and see which is your favorite! Which of these facts about the Magic Carpets of Aladdin stand out most to you? Let us know in the comments on our Facebook page.