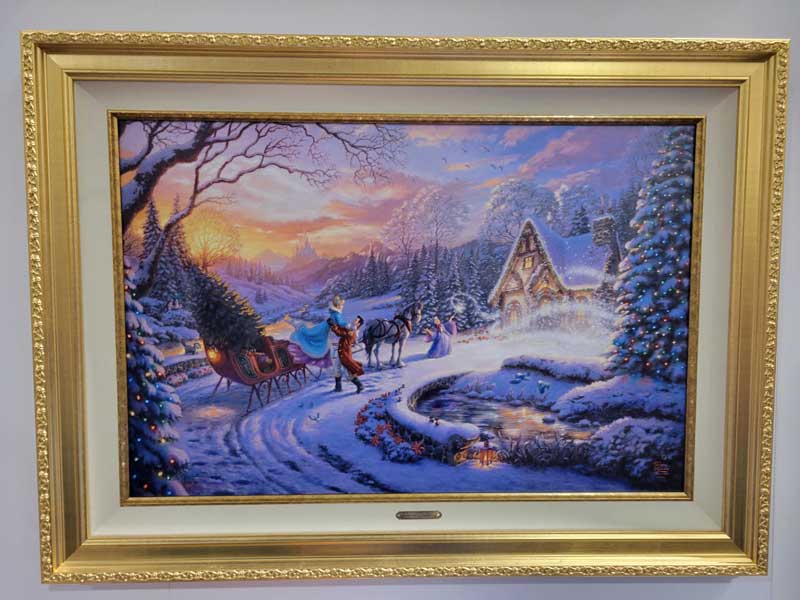 New from D23: Thomas Kinkade Disney works were released at the Expo on Friday. Here are the new pieces…

Prepare to be immersed in the magical world of Disney, beautifully painted in the style of a Disney legend. Disney buffs and art connoisseurs alike are gathering this weekend at the D23 convention in Anaheim, California to get a first look at all-new works by Thomas Kinkade Studios!

Con-goers have the special opportunity to get the backs of these never-before-seen works signed and illustrated with a unique character sketch—but if you can’t make it out to the convention, you still have the chance to grab these works for your home on thomaskinkade.com.

What to Know Before Buying a Thomas Kinkade Painting

As you probably already know, Thomas Kinkade Studios offers a wide range of paintings inspired by both classic and modern beloved stories. However, inexperienced buyers may be unfamiliar with how many options the studio truly offers.

The studio typically offers four sizes of each painting: 12″ x 18″, 18″ x 27″, 24″ x 36″, 28″ x 42″. Original paintings can be purchased unframed or within one of eighteen frames ranging in price from $180 – $300. For those seeking one of these captivating works but don’t want to break the bank, you can opt for a wrapped canvas reproduction or paper print! 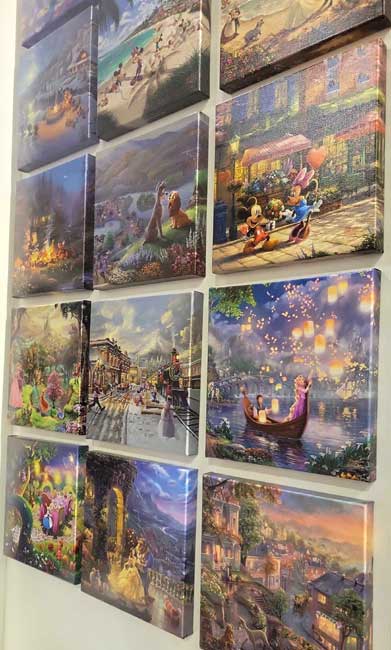 Kinkade began working with The Walt Disney Company in 2005, when he was first commissioned to create an artwork that captured the spirit of magical family memories for Disneyland’s 50th anniversary. The painting depicted families gathering around the Partners statue in front of Sleeping Beauty castle, ready to embark on a day of whimsy and magic.

Since laying eyes on that first collaboration between Disney and Kinkade, fans have coveted the inspired works that Thomas Kinkade created. After his passing in 2012, a small team of painters mastered the Kinkade technique, carrying on his legacy and teachings through his studio. The premiere of their latest works was this weekend at the D23 convention in Anaheim – but if you weren’t able to make it to the con, we’ve got you covered! 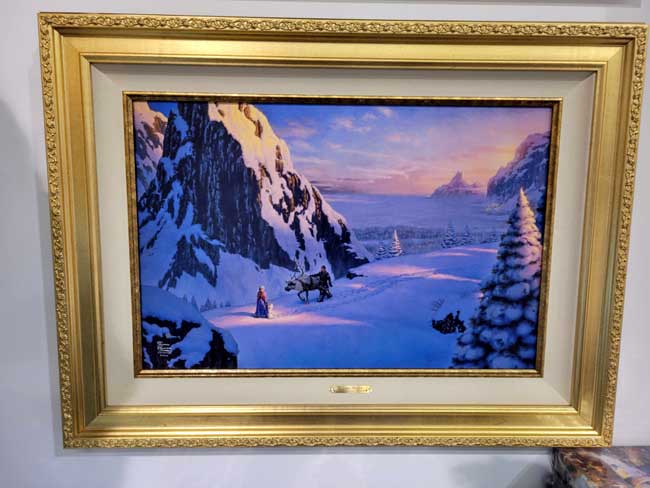 Fans have long awaited the arrival of a Kinkade painting inspired by Disney’s Frozen – and rightfully so, considering it’s been nearly a decade since its release (where does the time go?)! While I recover from feeling old, take a look above at this beautifully illustrated scene.

During twilight, Anna and Kristoff lead Olaf and Sven through the Norwegian tundra, searching for Elsa. Golden sunlight peeks through onto the purple-hued fallen snow as they look for the runaway queen. The artists behind this scene really captured the essence of the film, including Anna’s persevering love for her sister and determination to save her kingdom.

Take a look at your options at the Thomas Kinkade Studios website. 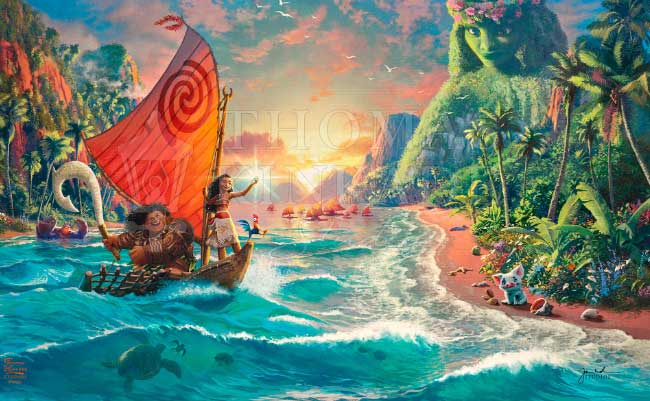 The sensations of freedom, independence, and unbridled hunger for purposeful adventure are feelings you just can’t bottle – but the artists behind this piece have come pretty darn close! This is the first Moana-inspired piece that the studio has ever created, and it’s certainly lived up to collectors’ expectations.

See the line where the sky meets the sea? That’s where Thomas Kinkade studio artists painted that beautiful burst of sunlight that shines through the entire piece, piercing Moana’s sails and the majestic Polynesian mountains that cradle the waters she surfs across. Pua and Te Fiti watch from the shore as Moana and Maui sail off toward their next adventure.

But the journey doesn’t end there – other offerings featuring this Moana-inspired artwork can be found here! 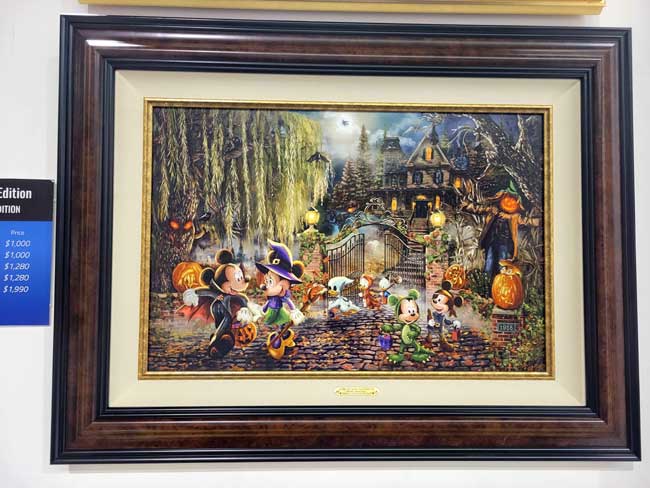 A picture-perfect night of tricks and treats. Photo by Tatjana Lazar

Thomas Kinkade Studios continues its list of “firsts” with this adorable Halloween scene. Believe it or not, this is the very first Halloween-themed painting they’ve ever released!

In this spooky piece, the iconic pair strolls down a cobblestone path in their Hallow’s Eve best. Mickey and Donald’s nephews trail behind them, seemingly leaving the steps of a haunted house where they’ve looted some candy. The sight of glowing jack-o-lanterns and rickety scarecrows compels the viewer to imagine the scent of fallen autumn leaves and pumpkin-spiced treats!

More treats await you here, where you’ll spot even more ways to take this piece home with you (no matter your budget)! 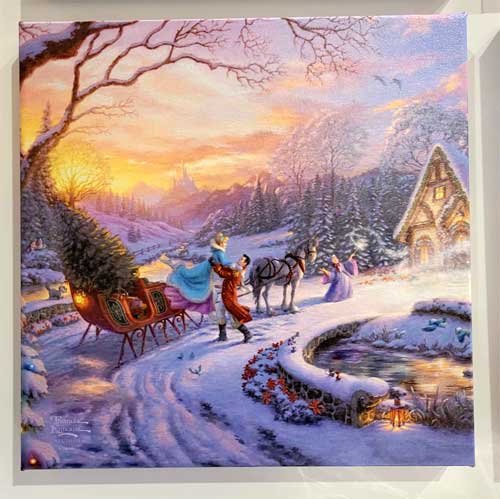 Thomas Kinkade Studios is celebrating Christmas early this year! This piece will be the first in their series which imagines beloved Disney princesses celebrating the holidays. How will Disney royals deck the halls or sing Christmas carols? Well, you’ll have to wait and see – this painting was only sneak-peeked at D23.

For collectors that want to add this festive work to their homes during the holidays, you’ll have to reserve your own via pre-order here. Pricing has yet to be released, but prospective buyers will be in the know on November 1st when the piece is released as Limited Edition Art and Gallery Wraps.

“On the Run” by Thomas Kinkade Studios 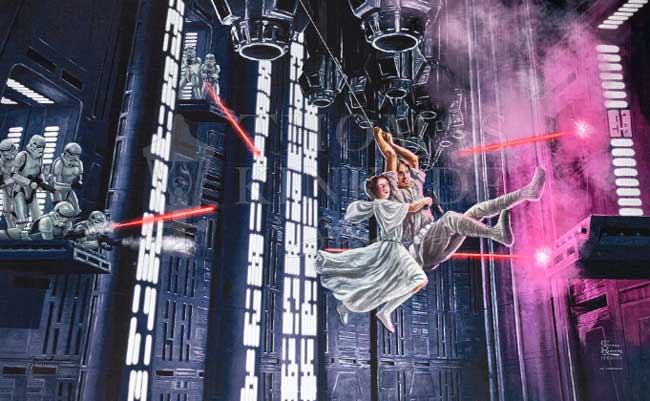 Princess Leia Organa is one of the original Disney girl bosses. Before Mulan, Merida, and Tiana, there was Leia. When her character first made its debut in 1977, she was a rare depiction of a fierce, brave, and kindhearted heroine.

Kinkade artists have depicted her bravery perfectly in a moment of swift action. In the painting, she swings away from stormtroopers on a spaceship helmed by the Galactic Empire, beams from blasters flying around her! Sure, Luke Skywalker is shown in the piece too – but we know who the real star is.

Check out all the ways you can order this piece (including via futuristic metal box art) here!

“The Mandalorian™ – A Force Within” by Thomas Kinkade Studios 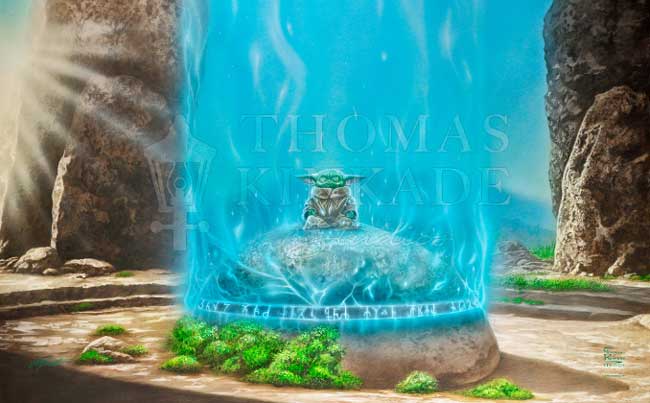 Allow Kinkade legacy artists to take you on a galactic journey far, far away when you gaze at this incredible Mandalorian-inspired painting. This piece is a welcome addition to their Mandalorian series, which is a must-buy for any Star Wars buff!

The artwork features Grogu (known by adoring fans as “Baby Yoda”) atop the Jedi seeing stone as he calls out to all Jedi in the galaxy. Large stone rock faces surround the area as a powerful blue field of power engulfs Grogu’s adorable little body. It’s incredible how something can be so cute and so majestic at the same time.

There’s a galaxy full of options for this piece – check out every option here! 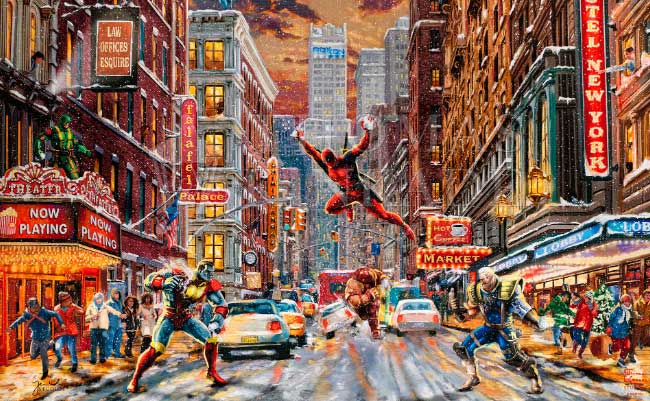 Now this is a combo I never thought we’d see! The raunchiest superhero in the Marvel universe has officially been portrayed by the whimsical talents over at the Thomas Kinkade Studios. Throw the holidays into the mix, and we’ve got the most unexpected D23 release yet. Yes, you heard that right – Deadpool is soaring across a New York City street, lights all aglow during the most wonderful time of the year!

Grab a chimichanga and a glass of eggnog, this is gonna be a wild ride! Pay close attention to the incredible details of this piece and you’ll notice a few of Deadpool’s enemies waiting to pounce on him as snow falls over the beautiful Big Apple.

So which masterpiece will find its way into your home? The only thing we’ve got to complain about when it comes to Thomas Kinkade Studios is that they make it so darn hard to choose!

If you’re at D23 this weekend, don’t miss out on your chance to get your hands on your very own piece. Check out all the magic that’s going on at the Thomas Kinkade booth this year: