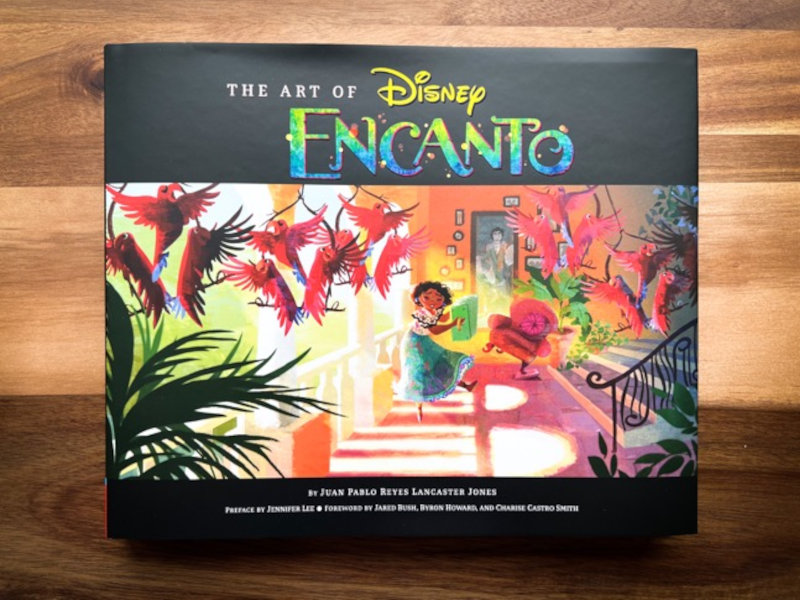 Check out The Art of Encanto to learn more about Encanto and its magical characters after you watch on Disney+.

For many of us, the recent holiday season meant a healthy dose of family time. While you might think of your family as magical, I’m not quite sure the best of them can truly measure up to the Madrigal family in Disney’s 60th animated movie, Encanto.

If you haven’t seen Encanto yet, it’s about a magical family where everyone has unique gifts. Everyone, that is, except for Mirabel.

When something threatens the magic and her home, it’s up to her to save the day. To tell you anything else would be spoiler-y.

Since Encanto just moved to Disney+, you can make some snacks and enjoy it right now. Go, do it now; this article will be here when you get back.

The Art of Encanto

As with any Disney or Pixar film release, it’s accompanied by an art book to help us take a deeper look into the film’s visual development.

The Art of Encanto, by Juan Pablo Reyes Lancaster Jones from Chronicle Books, takes us on a ride to learn more about Colombia and the way it inspired the movie, as well as the special Disney magic that made the movie a new classic. 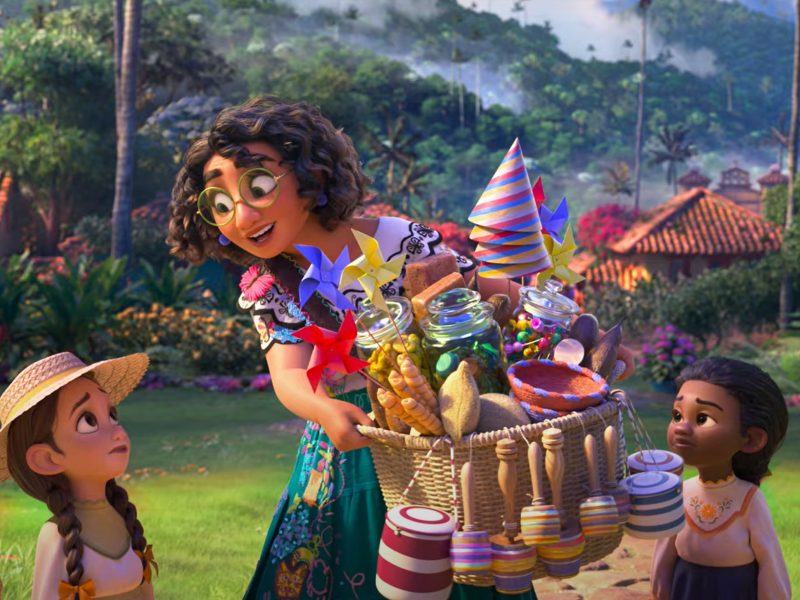 A scene from Encanto, which takes place in Colombia. Photo courtesy of Disney

Like many Disney or Pixar productions, the book opens with pictures and stories of the production team’s trip to visit the country the family Madrigal calls home, Colombia. Not only did the nation provide a backdrop, but it also informed a lot of story decisions, such as making the family matriarchal.

Not going to lie, I do have to say one sketch in the book made me sad that we missed out on an Abuelo in charge instead of Abuela. It’s a little square on page 17 featuring a small child with a mustache. Its caption reads, “By age four, he had grown a mustache by the sheer force of his will.”

Besides the pictures, the text of the book explains how Colombia is a giant melting pot, thanks to its borders that stretch from the Caribbean to the Pacific. I wish there had been a bit more about Colombia in the book, honestly, since it takes place in the country and not somewhere inspired by it. However, it gives a lot of good information so you can start your learning journey. 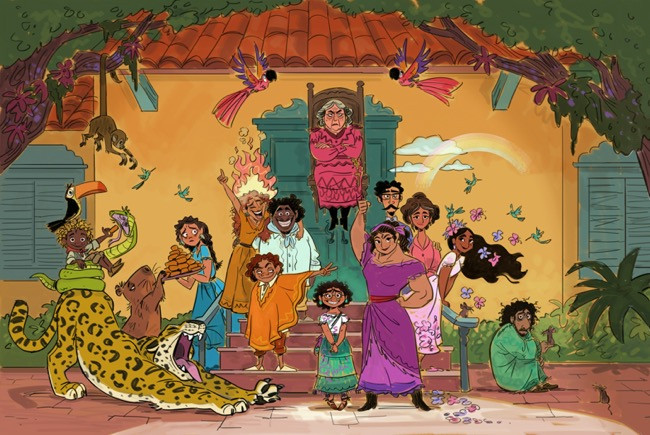 Preliminary artwork (by Bill Schwab) for La Familia Madrigal shows diversity was a consideration right from the start. Photo courtesy of Chronicle Books

While entertainment powerhouses like Disney can always do more for diversity, the notes from the production of Encanto make me optimistic. As noted in the preface by Executive Producer Jennifer Lee, Mirabel, the main character of Encanto, is the first Latina heroine for Disney Animation. She also is one of the first main characters I can remember who wears glasses. (Milo from Atlantis also comes to mind.)

To make sure they got as much right about her and the Latinx people in the movie as possible, the production team regularly worked with the Familia group, which was featured at the end of the credits scroll for the movie. It was composed of Latina and Latino employees at the studio who not only advised the film but also put on cultural celebrations to share with their coworkers.

While Colombia is a South American country, its residents come from many different backgrounds. The animators could have just made everyone look similar, but they made sure to include Afro-Colombian characters, like Tia Pepa’s husband Felix and their three children.

Animators consulted with the Disney Animation Studios’ Black Employees group to make sure Black characters were properly represented. This was especially important when it came to animating characters with natural hair, like Antonio and Dolores.

Are you intrigued by the art of Disney animation? Subscribe to the print edition of WDW Magazine to get our special Art and Animation issue in March 2022. 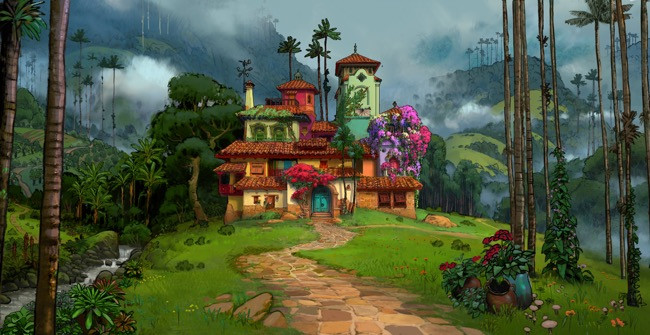 Preliminary artwork on the casita in Encanto by Mehrdad Isvandi. Photo courtesy of Chronicle Books

Encanto and its casita are not Disney’s first foray into magical houses (looking at you, Beast’s Castle!). However, this might be the first time where the house isn’t just magical; it is alive and a character in its own right. I will happily concede defeat if you can provide other examples.

I loved finding information about the casita’s design in The Art of Encanto, including its tile patterns and how its layout reflected both Colombia and its unique inhabitants. There’s also a series of drawings in the book that show the rules animators had for the house’s movement.

For example, the house’s components had to move like their materials—no bendy wood or soft tiles allowed.

Unlike the Beast’s castle, the furniture can’t move on its own. If you look closely, anytime something that’s not part of the house or built-in furniture moves, it’s actually being shifted by the tiles that cover the floor.

My only gripe with the house’s design is that Mirabel never had her own room; she was always stuck in the nursery since casita didn’t give her a gift or a room. I’m glad that sharing space with Antonio made them closer, but I’m sure he was a bit miffed by the noise from her working on her sewing machine.

Related: There’s an Encanto food booth at Festival of the Arts

When I reviewed the art book for Raya and the Last Dragon, one of the things I loved the most was seeing how the characters’ costumes helped reflect their inner selves. The same is true of Encanto.

In this art book, you can learn more about how each member of the family has art on their clothes to correspond to their gifts. This includes little animals in the embroidery of Antonio’s shirt to hourglasses on Bruno’s poncho.

Sorry, I know we’re not supposed to talk about Bruno.

Even the members of the Family Madrigal who arrived through marriage have fun clothes. For example, Mirabel’s father Augustin wears a flower in his lapel from his floral daughter Isabella. You never see it clearly in the movie, but he also has mismatched socks—one to represent Luisa and one for Mirabel. 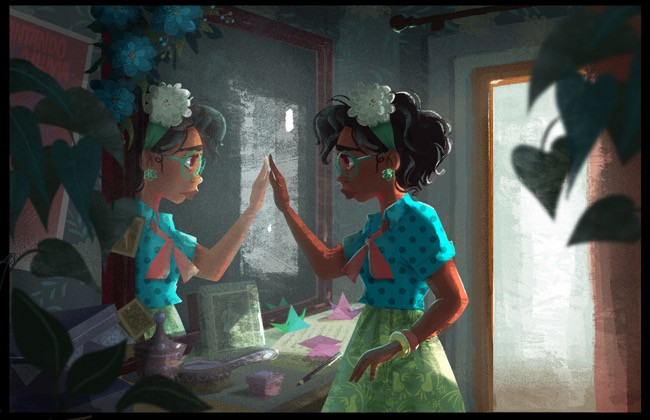 Early artwork for Mirabel and her clothes by Lorelay Bové. Photo courtesy of Chronicle Books

Of course, the best costume in the whole movie belongs to Mirabel. As you watch the film, you get the sense that she took the clothes given to her and customized them (she even plucks a stray thread from her skirt in the opening of the movie).

In The Art of Encanto book, you can get a better look at the way she honors her family with the embroidery on her clothes, like flowers for Isabella and dumbbells for Luisa.

Review: The Art of Encanto Gives Us Insight Into La Familia Madrigal and Disney Animation

If you’re ready to learn more about La Familia Madrigal and Encanto, The Art of Encanto from Chronicle Books is available now from your preferred bookstore. I highly recommend picking this one up if you are a fan of Encanto, animation, and Colombian history and tradition.