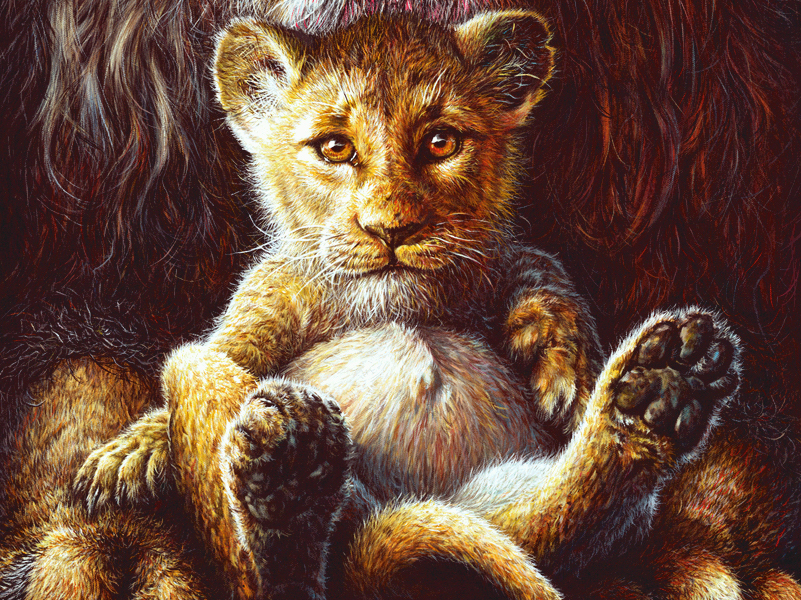 Have you ever wondered about the artists behind all of the amazing work at the EPCOT International Festival of the Arts?

There are so many talented individuals selling their craft and teaching guests about the arts. From Disney pieces, to Star Wars masterpieces, to Pixar items, there’s so much to choose from — and, boy, is it hard to decide on just one piece!

Well, one artist you definitely need to meet is Craig Skaggs. He’s an official fine artist for both Disney and Lucasfilm and has been mastering his talent for quite awhile now.

I was lucky enough to chat with Skaggs via email in February about his background as an artist, working with major companies like Disney and Lucasfilm, and much, much more. So, let’s get to know him better, because you definitely need to keep him on your radar.

A Little Bit About Craig 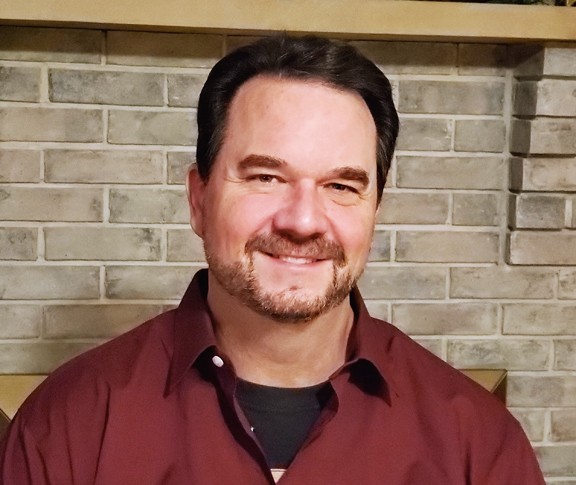 Craig Skaggs is a talented fine artist for Disney and Lucasfilm. Photo courtesy of Craig Skaggs

Skaggs’ art resume is quite impressive. Before even graduating from Florissant Valley College for Commercial Art and Design in St. Louis, Missouri, he worked for a small children’s book publisher as a junior in high school and even went full-time freelance around 1993.

He tested his skills in a range of jobs, including a small advertising agency and doing artwork for the Brown Shoe Company (now known as Caleres), where Skaggs mastered both the artwork and design for a line of Star Wars shoes.

If that isn’t enough, Skaggs even designed the jet shoes seen in Spy Kids 2, along with other work for book covers, independent comics, gaming magazines, and toy and product designs.

While he still does work as a medical illustrator and a convention artist, his passion lies with creating art for Disney and Lucasfilm.

Thanks to readers like you, we’re able to bring you the news without bombarding you with annoying ads. Please consider supporting us directly by subscribing to our print edition, and make sure  to sign up for our FREE newsletter so you never miss out on the latest at Disney World!

Working With Disney And Lucasfilm 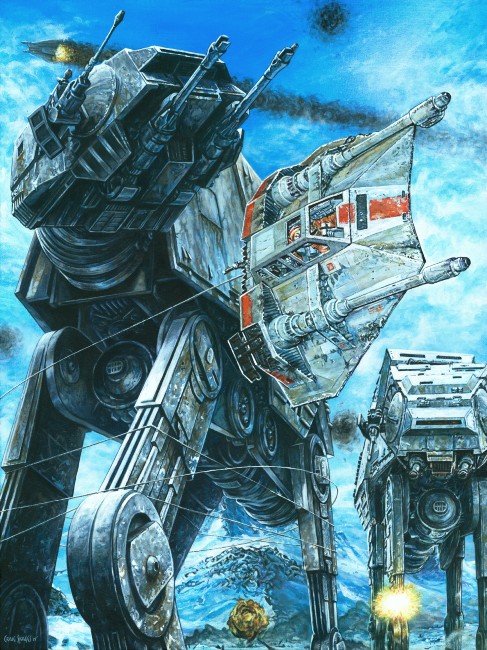 First things first, Skaggs revealed that not only did he get to visit Skywalker Ranch for a business trip, but that George Lucas owns one of his paintings. Whoa! Now that is major.

But, let’s talk about how Skaggs got started with Lucasfilm in 2018 and Disney in 2019.

“I met an official fine artist for Disney at a convention I was doing. I asked him how he got signed up with them, told him about my experience with Star Wars, and he told me about ACME Archives,” Skaggs explains.

“He said I should contact them because they were the largest publisher of Lucasfilm fine art. I contacted them, sent some samples, and they signed me right away.”

As for Disney, he says his “favorite” Disney artist Greg McCullough told him how to get in touch with Disney Galleries. After sending them some samples, Skaggs says they signed him, and he couldn’t be more thrilled. 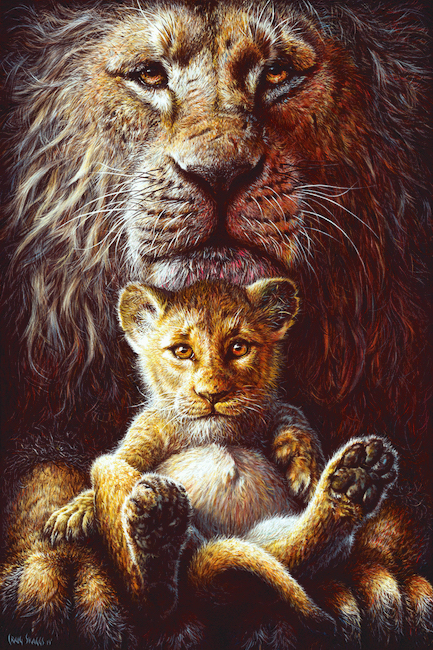 “Signing with Lucasfilm was exciting. Signing with Disney was even more exciting. Being signed with both is incredible!” he boasts. “What I want most is to give my very best to each. To make sure the fans know by looking at my work how passionate I am about both of these companies, the stories, and the characters.”

For Skaggs, he says signing with both companies came at the perfect time for not just his career, but where he is as an artist. “I’m now at the level of painting and artistic skill I always wanted to be,” he says, “Which means I can create some very memorable pieces.”

Advice For Other Artists 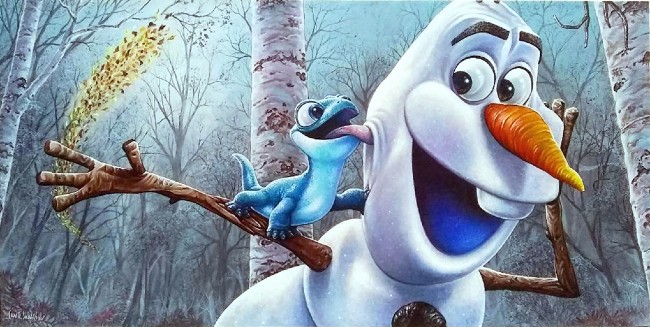 If you’re looking to sign with Disney, Lucsasfilm, or just get your foot into the art game, Skaggs has some advice.

“It’s not an easy game,” he admits. “I can’t begin to tell you how much it’s changed since 1993, and I heard the same thing from the older artists about how much it had changed going back another 30 years. If someone is really passionate about it though, I recommend spending as much time as possible honing the craft. Research as many artists as you can, and study how they worked.”

Skaggs says being an artist is much more than “just drawing or painting”. He recommends studying color theory, composition, perspective, light, shadow, and more.

“When you feel confident, start contacting as many companies as you can,” he says. Even though social media presents both good and bad challenges to the art business, Skaggs says to “take full advantage of it.”

“Another important piece of advice is that if you want this to be your job, make sure to treat it like a job,” he says. “It doesn’t matter if you’re having a good day, a bad day, or if you have no inspiration at all… work!”

He also adds, “You’ll also find some of the biggest surprises in your work come at times when you just don’t think you have anything left. Success is basically just not giving up.” 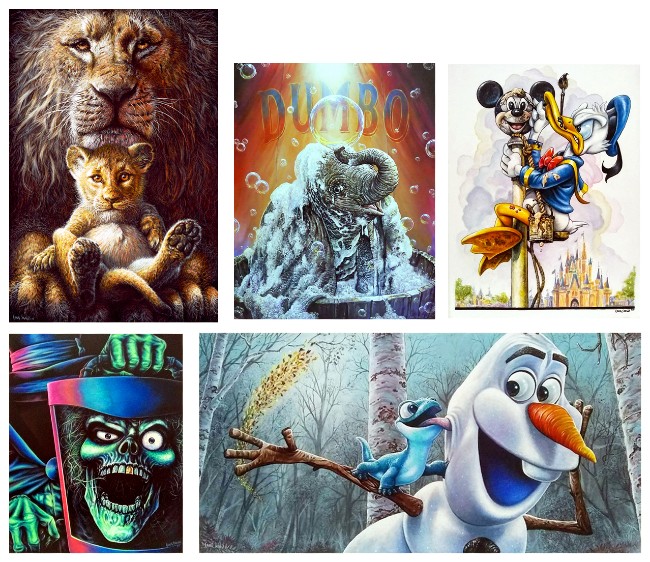 You can soon purchase these awesome Disney pieces. Photo courtesy of Craig Skaggs

If you’re interested in the upcoming release of new art from Skaggs, unfortunately, the pandemic impacted the release of some of his items at the parks, but there are set release dates for the following that are also subject to change:

Skaggs is based in Troy, Illinois, but you’ll be able to find prints of his Disney paintings inside the parks at various galleries and at the Art of Disney gallery in Disney Springs.

His Star Wars art can be purchased from the publisher ACME Archives or you can contact Skaggs directly for Star Wars and other personal pieces through his portfolio page on Facebook — Craig Skaggs Illustration.

Skaggs will even personally sign prints, do custom embellishments, and private commissions. Stay tuned for his own website too that should be live later in 2021!

There’s no denying Skaggs is a talented artist. Hopefully we’ll get to see some of his new items soon across Walt Disney World. Which one are you going to get first? Tell us over on our Facebook page, and be sure to subscribe to our Print edition of WDW Magazine!