5 Tips For Dealing with A Hurricane at Disney World 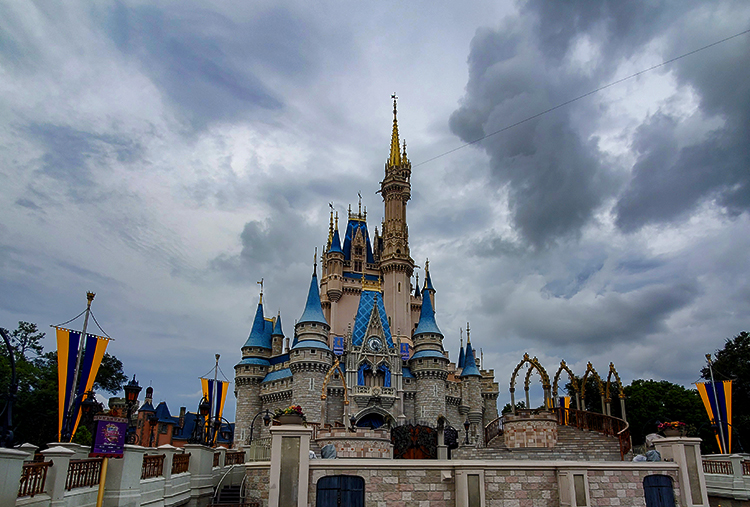 You’ve spent months⁠—maybe years⁠—planning this trip, and now you hear a hurricane is on the way.

Or maybe, a little Disney magic will save the day…

5 Tips for Dealing with a Hurricane at Disney World

“What are the odds I’ll run into a hurricane? Oh, not likely at all!” I thought to myself as I processed my final payment for my upcoming September trip to Walt Disney World.

It’s no secret that September is hurricane season in Florida. Yet Walt Disney World had only ever closed a handful of times in its history due to severe weather, so I was convinced I’d be safe.

Sure enough, on what was supposed to be the final day of my trip, all flights out of MCO were grounded and I was stranded in Walt Disney World.

It’s not the first time in history something like this has happened, and it won’t be the last. So, for those of you looking to book a trip to Walt Disney World during hurricane season, here’s my best tips for weathering the storm. This is how I rode out a hurricane at Disney World. 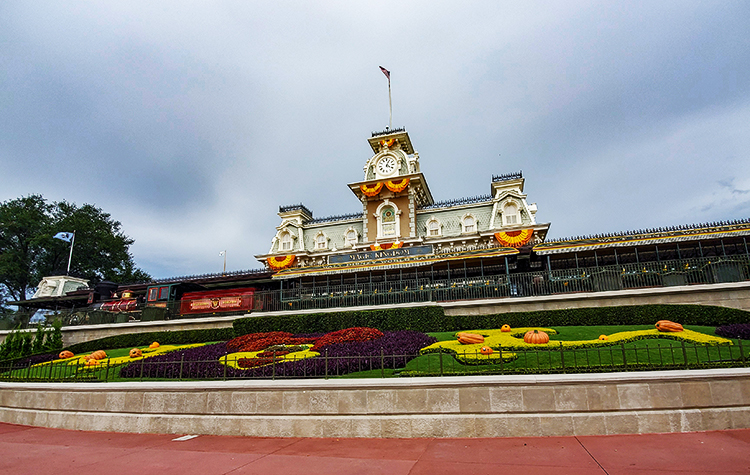 Don’t let grey clouds stop you from having a blast at Walt Disney World! Photo by Tatjana Lazar

I’m a worry wart. I’m pretty much always worried about one thing or another. But when it comes to being at Walt Disney World during a hurricane, I don’t sweat it even a little.

Disney takes every precaution imaginable to secure the safety of their guests. So if you do ever find yourself hunkering down at Walt Disney World to ride out a hurricane, just remember—it’s one of the safest places you could be!

As soon as I heard that MCO had closed, I knew I’d need to reserve at least one extra night—maybe two—at my resort. I also needed to decide if I wanted to stay at my current Disney resort, or move to a different one.

I had been staying at Disney’s Pop Century Resort during my trip. Now, with the threat of a hurricane looming over me, I decided I wanted to move to a Deluxe Resort instead of staying at Pop Century. 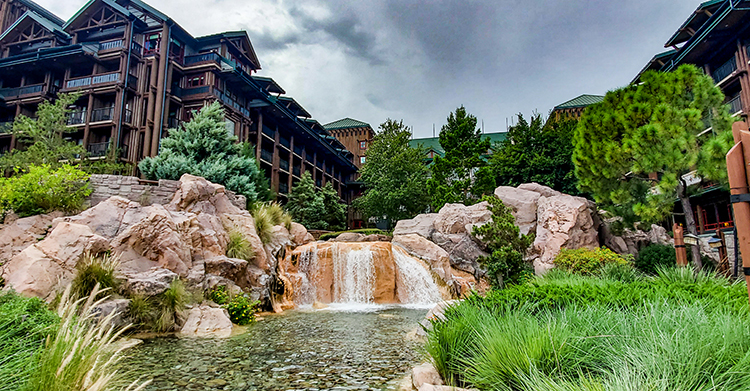 The skies above Wilderness Lodge turn dark as hurricane Dorian rolls in. Photo by Tatjana Lazar

The rooms at Disney Value Resorts are not directly connected to the main buildings. Instead, you have to walk outside to get to the lobby, food court, or other amenities.

Walking outside during a hurricane is obviously not advisable, so if I decided to stay at Pop Century, I would be trapped in my room, unable to venture outside for food or entertainment.

Disney Deluxe Resorts however, are generally one very large building that houses the lobby, food venues, some amenities and the guest rooms.

By moving to a Deluxe Resort, I’d be able to wander the hallways for a change of scene, grab food whenever, and hang out in the lobby where games and entertainment are sometimes offered during park closures.

I decided to move to Disney’s Wilderness Lodge. 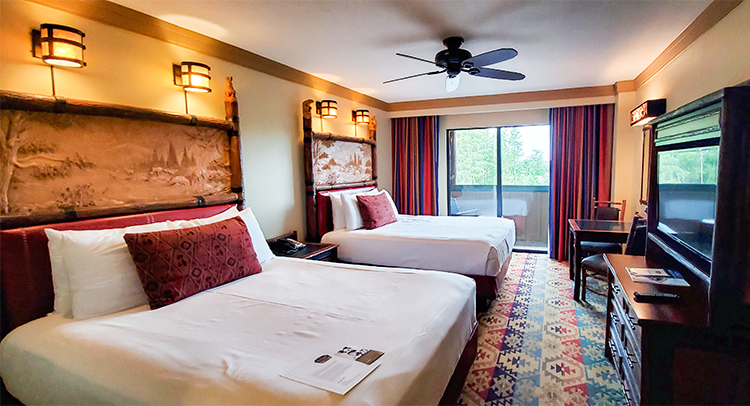 The studio rooms at Wilderness Lodge are a warm and cozy spot to wait out a passing storm. Photo by Tatjana Lazar

Moving from Pop Century to Wilderness Lodge is a pretty big increase in price, and Disney doesn’t cover the cost of extra nights due to hurricanes. Lucky for me, my awesome Destinations to Travel agent, Mike, was able to get me a “Dorian Discount,” something I would have never known was possible if I had booked it on my own. This is just one of the many reasons I always recommend booking with a trusted agency like Destinations to Travel.

It’s not a guarantee that Disney will offer discounted rooms during a hurricane, but it does happen!

Not only did Mike get me a discount, but he also checked in with me regularly to see if I needed anything, answered my questions, and reassured me that everything would be okay. None of these things were necessary, but it sure was nice knowing that he had my back if anything went wrong!

4 – Book Your Trip With Travel Insurance

If you don’t book your travel with credit cards, you always have the option to buy travel insurance separately. And while it is an added expense, the peace of mind it will bring you is worth every penny.

September is one of the lowest crowd months at Walt Disney World. Add to that the threat of an incoming hurricane, and you’ve got the formula for practically empty parks! 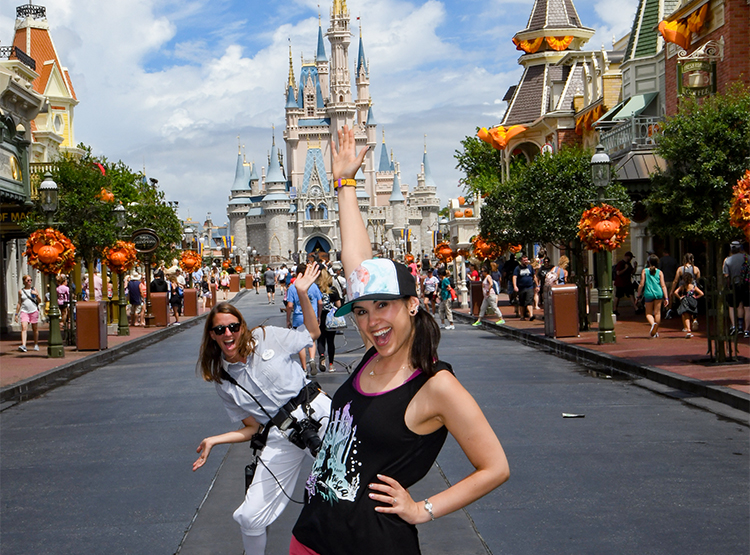 On the days before and after Dorian threatened to hit, I visited all the Walt Disney World theme parks and felt like I had a Fast Pass for every single ride.

The crowds were so low, I could have done cartwheels down Main Street U.S.A.—if I knew how to do cartwheels—and not hit anyone. I was able to walk onto any ride with minimal wait time, and even rode Flight of Passage in the standby queue twice! It was magical.

For this reason alone, September has become one of my top months for visiting Walt Disney World. I’m by no means hoping to encounter another hurricane. But hurricane season does scare a lot of folks away, and I’ll be taking advantage of that for years to come!

In the end, hurricane Dorian never actually hit Orlando. The parks did close early one day, but the only side effects from the hurricane I noticed were higher than normal winds and grey skies.

Hopefully that’s the extend of the bad weather you encounter on any trips you take to Walt Disney World during hurricane season. But if not, at least you’ll be prepared!

Take a trip to Walt Disney World every single month inside WDW Magazine! Subscribe today and don’t miss another issue!