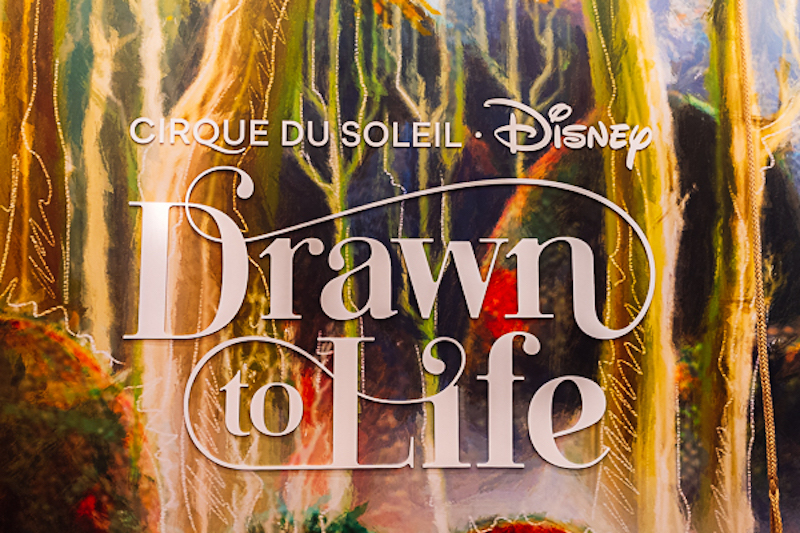 Drawn to Life is the newest Cirque du Soleil show and the best new live entertainment on Disney Property. We went on opening night and have put together everything you need to know about Drawn to Life before going to see it for yourselves.

Way back in March 2020, our communications director Tatjana, had the chance to see a preview of a few scenes from Drawn to Life by Cirque du Soleil and Disney while at Walt Disney World for another media event. When she came back, she told our whole team about it, and we all were pumped to see it as soon as possible.

Then the pandemic hit, and everything was put on hold. But I’m here to tell you that this brand new show at Disney Springs was well worth the wait.

Even after the significant delay in opening, Drawn to Life proves that the show must go on—and it does so with the signature style of Cirque du Soleil and the undeniable magic of Disney. 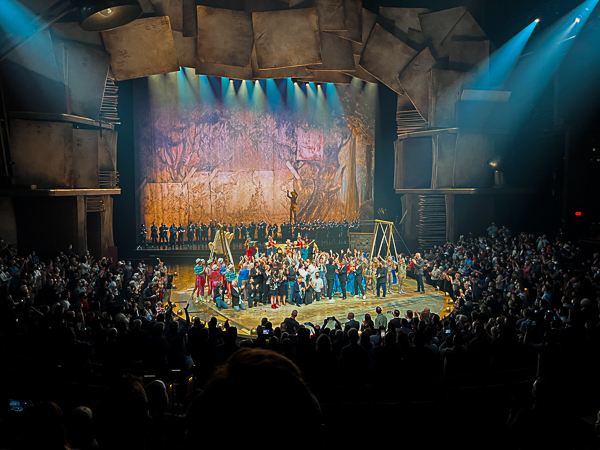 On opening night, the cast and crew gathered onstage for a well-deserved, extended standing ovation. Photo by Danny Shuster

The Opening Night of Drawn to Life

We were lucky to be invited to attend the very first public performance of Drawn to Life on November 18, 2021.

Before the show, we had the chance to speak with Eric Goldberg (Animation Director, Walt Disney Animation Studios) whose favorite part of the production was creating the animations for the lead character of Julie, which are used throughout the show to demonstrate her progress as an animator. His enthusiasm for the collaborative process between Disney and Cirque du Soleil made it clear what a work of passion this was to create. 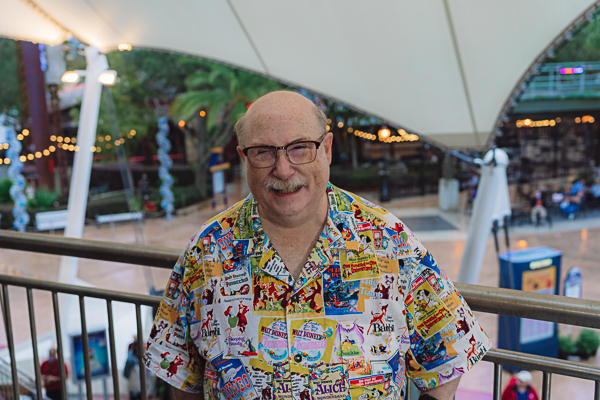 As big theater nerds ourselves, it was a delight to speak with Stephane Roy (Set Designer, Cirque du Soleil) about his inspiration for the set, which involves a never-before-seen seven-layer background based on the principal of the multiplane camera with original art interpreted in the style of Disney classics.

He told us about the pencil scene that occurs near the top of the show, which is very special to him, and it was honestly one of my favorites too. 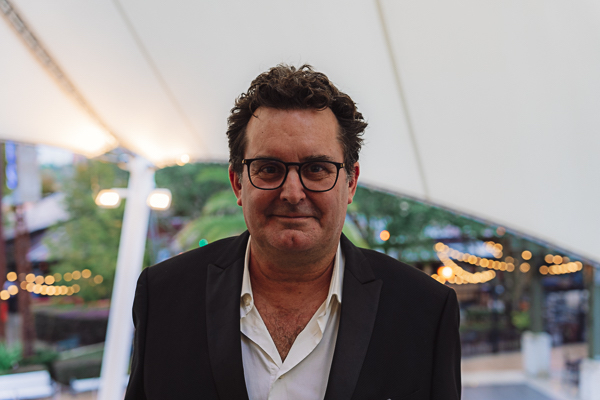 We’ll have more exclusive details from our conversations with Eric and Stephane in our March 2022 issue of WDW Magazine. Subscribe today to secure your copy!

Because it was opening night, we were treated to some pre-show bubbly, a commemorative pin and poster, and a very cool pre-show presentation by John Stamos, Jeff Vahle, and Daniel Lamarre. 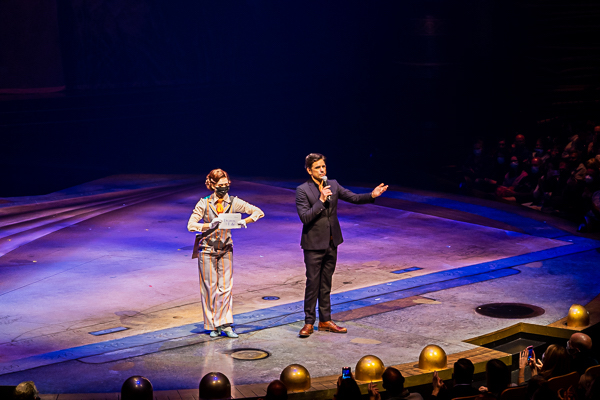 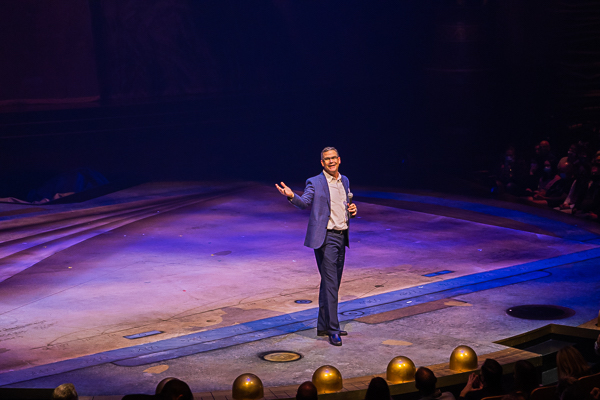 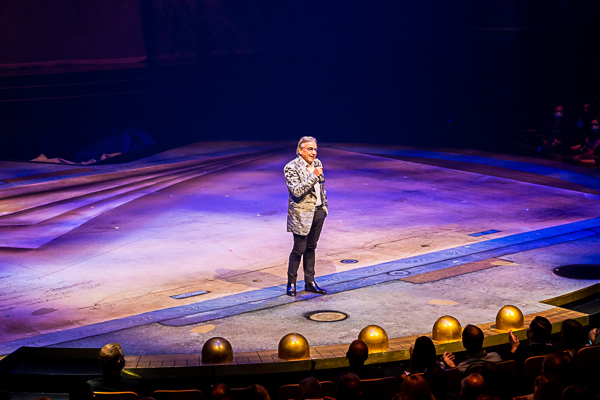 You could tell how much this show meant to each of them, and it set the stage for a memorable night.

You can catch more from the media event on our Instagram stories.

What to Expect from Drawn to Life

This 90-minute show features over 60 performers and blends storytelling scenes about a young girl named Julie and her journey to become an animator while learning all the principals of animation.

But you’ll also see fantastic projections, puppetry, and even live music (three things Disney does as well as anybody!). Of course, there is a lot of the character-driven clowning that Cirque is known for, primarily led by 4 lead clowns known as the Animators. 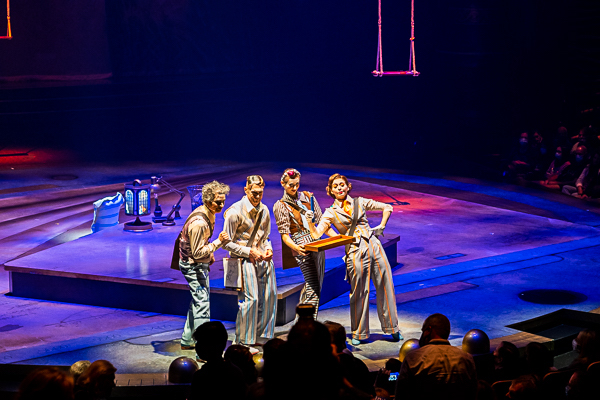 The Animators onstage during the pre-show. Photo by Danny Shuster

The costumes are vibrant, gorgeous, and so varied: blue fairies, pink and blue erasers, and a shiny green pencil, to name a few. They are the perfect contrast to the set, which is full of warm, rich earth tones—themed like a desk and paper with a brass lamp and pencil sharpener.

A rainbow of colors washes over the set from time to time, but everything pulls back to the simple idea of pen and paper between scenes.

This show captures the very heart of Disney animation. It tells a totally original story in a spectacular format, surprising the audience at every turn. Your favorite Disney characters and songs are all here, but with subtle nods or tongue-in-cheek hints.

The show captures the essence of those Disney stories that pull on your heartstrings but with a new interpretation all focused on animation itself. The scenes showcase the animation process from start to finish, and you’ll learn to see your faves in a new way. 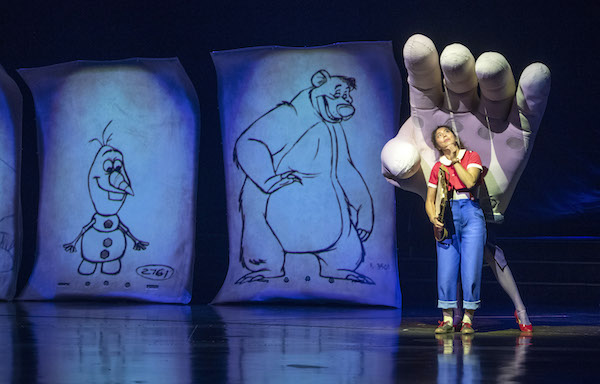 Julie is the main character of this instant classic. Photo courtesy of Disney

Should You See Drawn to Life?

In a word, YES! But given a few more words, let me tell you why (no spoilers!) …

If you have any appreciation for the history of Walt Disney Animation, the animation process itself, and the way that human and animal forms come to life on screen while seeming perfectly realistic in their movements, this show is for you. And if you’ve simply enjoyed Cirque du Soleil shows in the past, you’ll love this one.

And if you’ve never seen a Cirque du Soleil show, this is a great entry point, especially if you’re already a Disney fan! 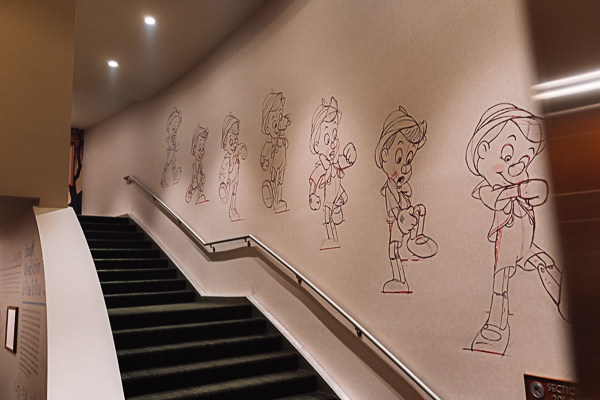 Even the lobby features animation details. Photo by Danny Shuster

On the other hand, if you have very small children who aren’t used to sitting still in a theatre for 90 minutes, this may not be the show for you—at least for a couple years until they are older! If your littles can sit through a Disney movie at the cinema, they’ll be fine here (if you’re worried about needing to leave mid-show, opt for an aisle seat). 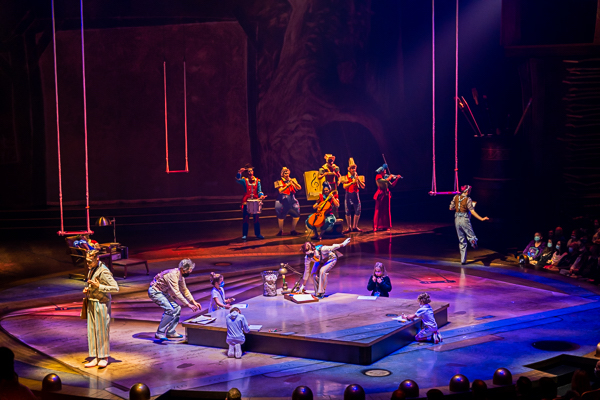 Performers and children onstage during the pre-show. Photo by Danny Shuster.

There is only one villain-centric scene, and it’s no more scary than something you’d see in Disney Enchantment (in fact, it’s got some humor!). And the costuming is more family-friendly than in Cirque’s Vegas shows.

The stunts are a little less extreme than some I’ve seen, but they are absolutely impressive, and, when mixed with the story and animation elements, the whole show will blow your socks off. Even the pre-show will keep kiddos entertained (and a few lucky ones might even get to participate onstage before the curtain goes up!).

For those with mobility concerns, there are accessible seating areas, and the seating in general has wide aisles, comfy chairs, and even cupholders for your lobby bar refreshments. 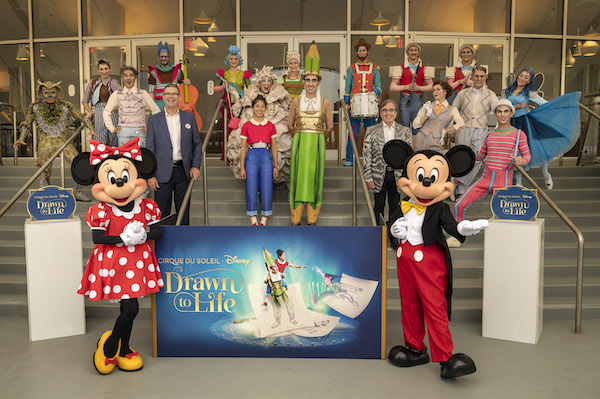 How to Get Tickets to Drawn to Life

If you want to check out this brand new show at Disney Springs on your next visit to WDW, tickets are available online or by calling (877) 924-7783.

Shows are typically performed 1-2 times per evening (5:30 PM and 8:30 PM showtimes for now, eventually changing to 5:30 and 8:00) Tuesday through Saturday. Being a live show, there are times when the Cirque tent “goes dark” for a week or two, so if this is a top vacation priority, check out the show schedule before you book your trip! 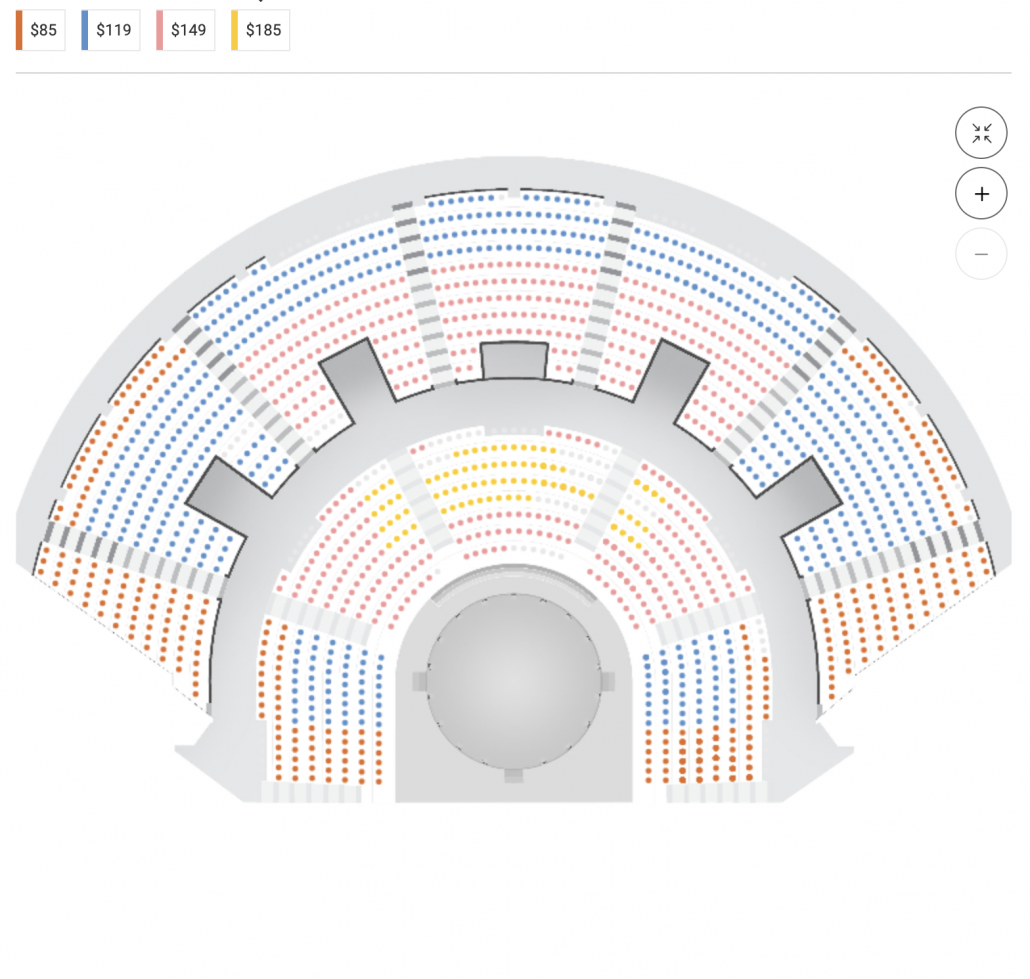 Buy your Drawn to Life tickets early. This is sure to be a sell-out! Photo courtesy of Cirque du Soleil

Tickets range from $85 to $185 per person (children under 2 are free), and you can see in the map above which seats correspond to those pricing tiers.

We sat on the balcony level in Section 205/Row P/Seat 2 and had a wonderful view, but truthfully I think the theater is built in such a way that there is no “bad” view.

But that’s something I love about any Cirque du Soleil show: Each time you see it, you’ll have a different vantage point to notice new details!

If you’re making a night of it at Disney Springs, there’s no shortage of great restaurants for a pre- or-post show meal, but House of Blues and CityWorks are the closest options and have some excellent food on their menus. 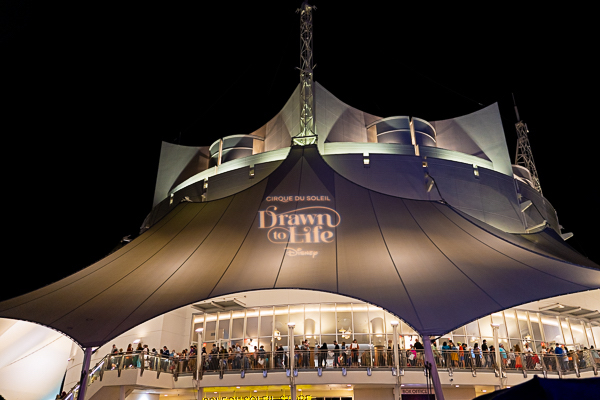 We’ll be providing a full review of the show in our upcoming March 2022 issue of WDW Magazine. Order your copy today!

Thanks to Disney for hosting us for the opening night of Drawn to Life Presented by Cirque du Soleil® & Disney! #DrawnToLife @CirqueduSoleil @DisneySprings