How to Find Spike the Bee: The Pollen-Nation Exploration Scavenger Hunt at EPCOT 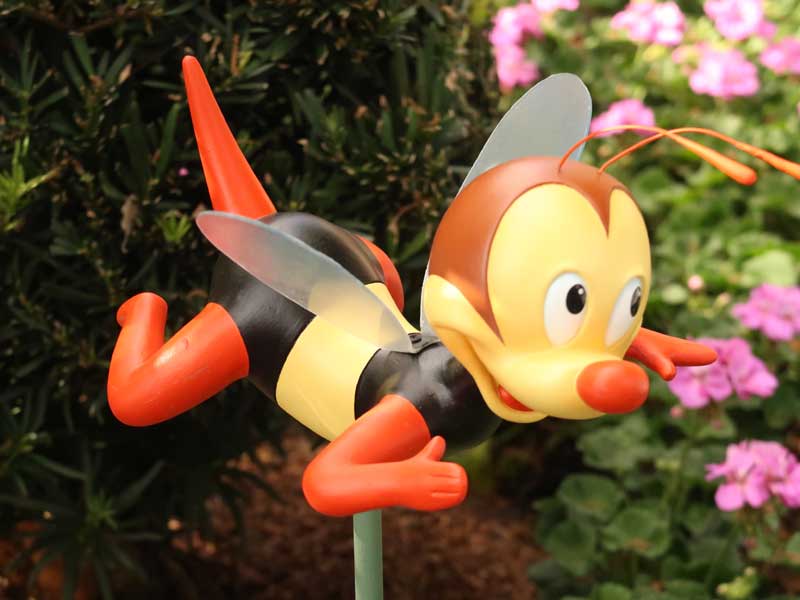 The 2022 Spike the Bee scavenger hunt has officially begun at this year’s EPCOT Flower & Garden Festival—and we’ve found Spike in every hiding spot. If you want to skip the hard work (before you get stung!) and just get your secret prize, read on to learn how to find Spike the Bee.

Tap here to go straight to the Spike the Bee scavenger locations around EPCOT.

Spike the Bee is one of mascots for EPCOT’s Flower & Garden Festival … but who is he? Spike debuted in many 1950s Disney cartoons. He famously tormented Pluto and Donald Duck in many early cartoons, but it wasn’t until the late 2010s that Spike found his way into the festival. Now he can even be found on a spork and sipper!

How to Play the Spike the Bee Scavenger Hunt

If your kids like hide and seek or simply finding new details around EPCOT, then this is the family-friendly Flower & Garden Festival activity for you! For this hunt, your family will search all over EPCOT for Spike the Bee among the flowers and plants. 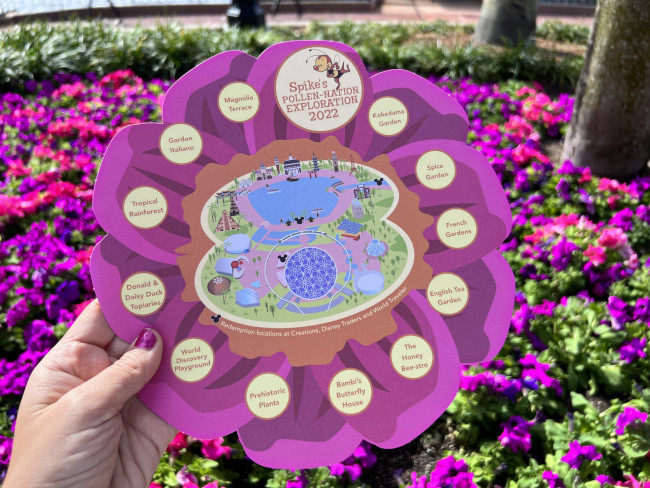 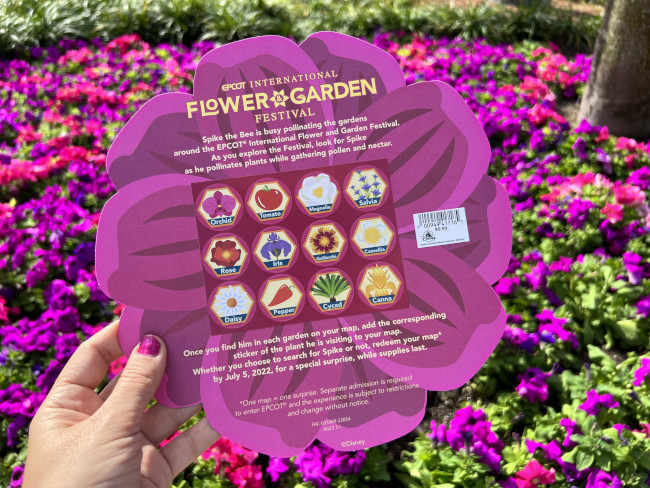 To play, you will need to purchase a scavenger hunt map and stickers for $9.99 (before discounts or tax). Maps are available for sale at Gateway Gifts, Creations, Port of Entry, Disney Traders, and some of the festival merchandise booths around the World Showcase.

A prize is included with each map purchase (before or after you complete the map).

You can use our guide to unofficially participate just for fun without the map. But you won’t be eligible for the prize! 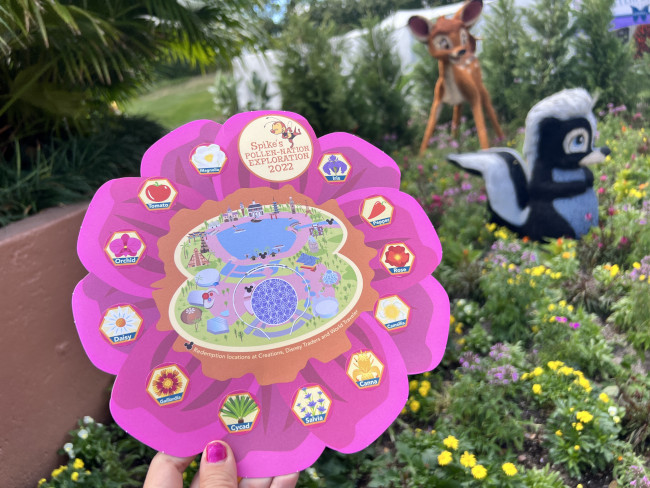 Ready to play the Spike the Bee scavenger hunt? Get our tips first! Photo by Julie de la Fe

Where to Find Spike the Bee

As a disclaimer, sometimes locations are changed. Even from Thursday to Saturday last week, one location of Spike had changed.

We started around Test Track this time around and worked our way through the map.

Spike the Bee in the Prehistoric Garden (World Celebration) 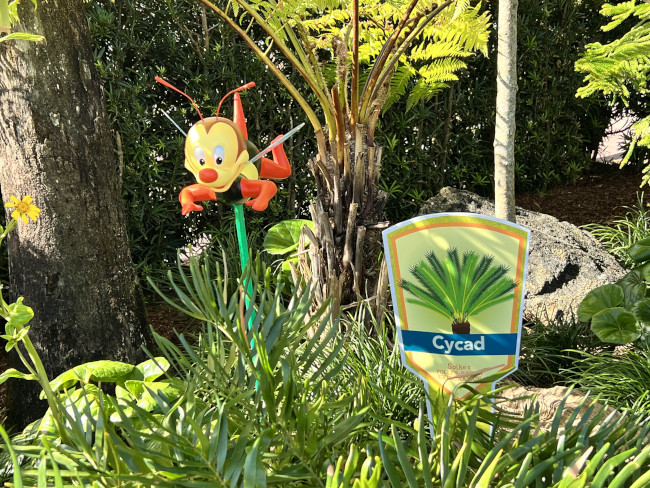 Where to Find Spike: Spike is hidden in some prehistoric plant between Club Cool and Test Track. He is accompanied by tiny plastic dinosaurs.

Plant: Cycad, an ancient plant that arrived before the dinosaurs (during the Permian period), approximately 280 million years ago.

Spike the Bee at the World Discovery Playground 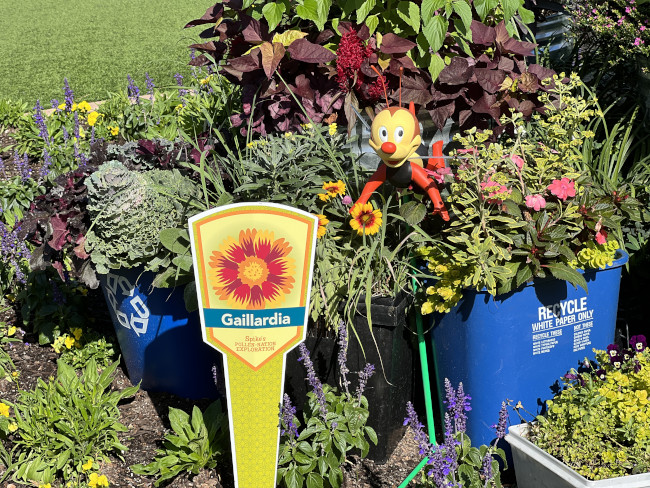 Where to Find Spike: Spike the Bee is visible front the walkway looking toward the playground and Creations Shop (close to Test Track)

Plant: Gaillardia, which you may know as the blanket flower; this is a low-maintenance perennial.

Spike among the Donald and Daisy topiaries. Photo by Julie de la Fe

Where to Find Spike: Find Spike among the main topiaries directly behind Spaceship Earth, close to the feet of Daisy Duck

Plant: Daisy, the name of your favorite female duck and also a pretty yellow flower (Bellis perennis of the Asteraceae family).

Spike the Bee in the Tropical Rainforest Garden (Mexico) 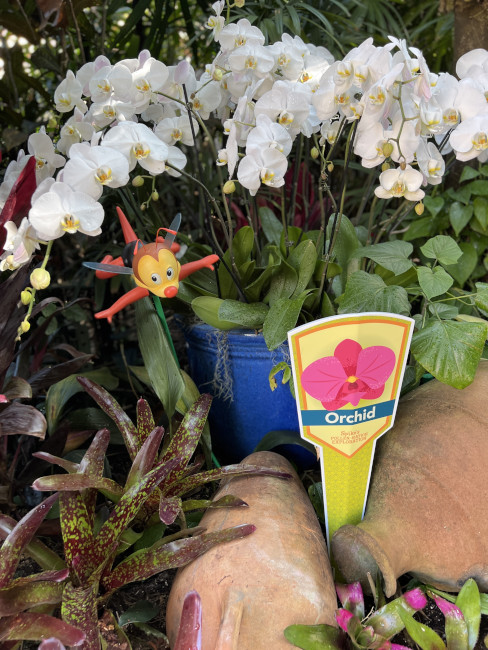 Where to Find Spike: The Tropical Rainforest Garden is found on the ramp leading up to the pyramid in the Mexico Pavilion.  Looking at the pyramid, the path is to your right. Once on the path, Spike will be on your left hand side.

Plant: Orchid, a plant commonly found in Mexico; Mexico has approximately 1,250 species of this plant.

Spike the Bee in the Garden Italiano (Italy) 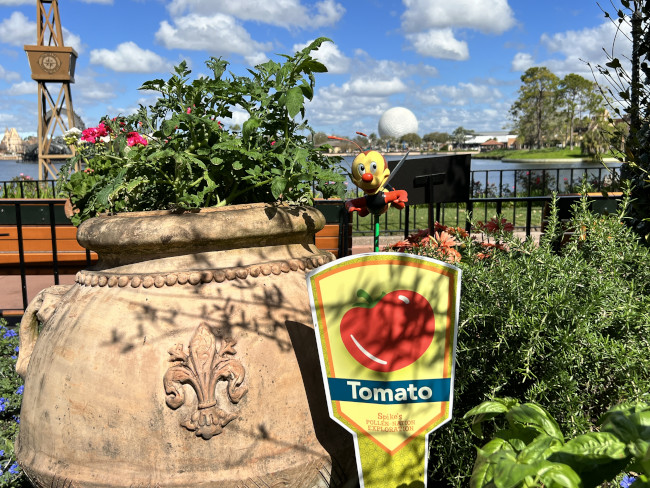 Where to Find Spike: Spike is in the garden waterside on the pathway between Germany and Italy.

Plant: Tomato, a food (fruit or vegetable?) that dominates Italian dishes—called a pomodoro in Italian. 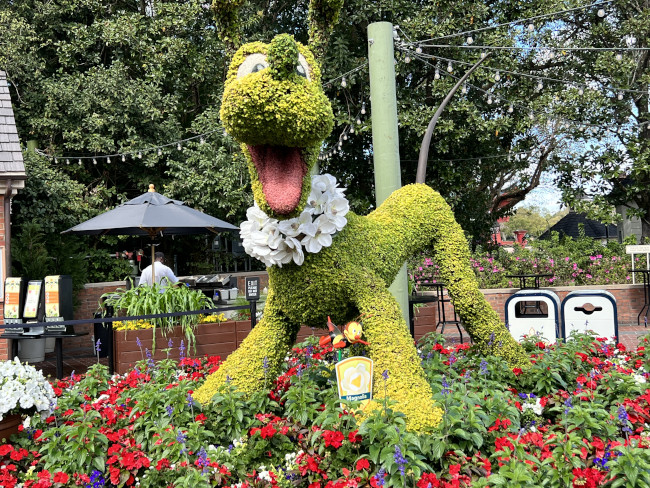 Where to Find Spike: Spike can be found at the feet of Pluto’s topiary right in front of Magnolia Terrace, the festival booth in the American Pavilion.

Spike the Bee in the Kokedama Garden (Japan) 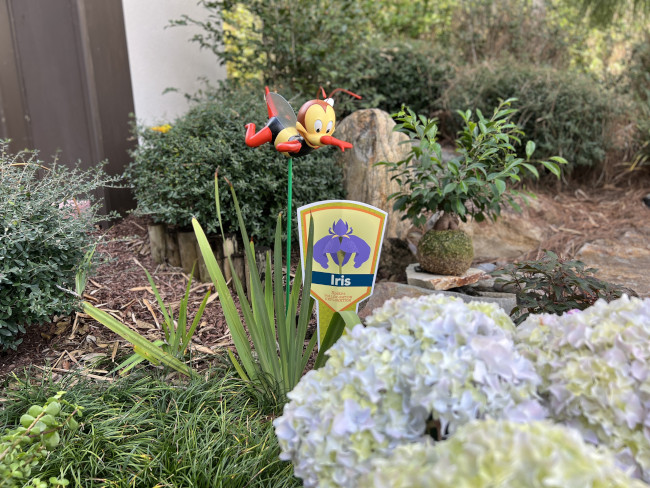 Where to Find Spike: This is one of Spike’s trickier locations. This garden is located in front of the Japan Pavilion’s main gift shop closest to the Morocco side. Find Spike near a trellis.

Plant: Iris, famous in Japanese culture because of its purifying properties.

Spike the Bee in the Spice Garden (Morocco) 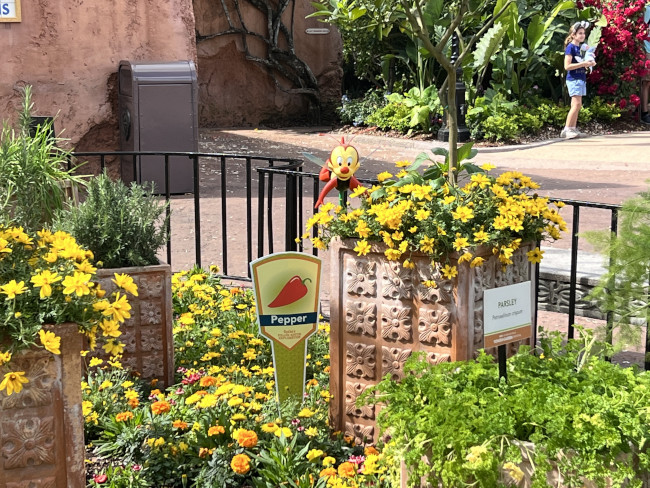 Where to Find Spike: Spot Spike the Bee directly in front of the restrooms at the Morocco Pavilion (between Morocco and France).

Plant: Pepper, one of the many spices for which Moroccan food is famous.

Spike the Bee in the French Gardens (France) 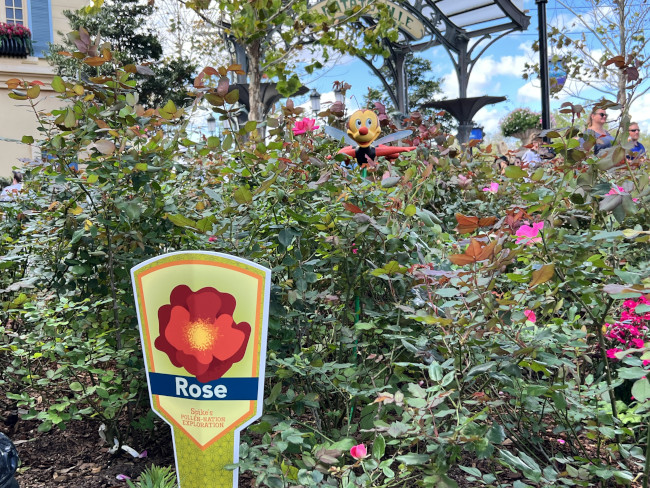 Where to Find Spike: Spike can be found here to the left of the Remy topiary right in front of the entrance to the new France expansion.

Plant: Rose, a nod to the romance of France and the rose in Beauty and the Beast, perhaps. 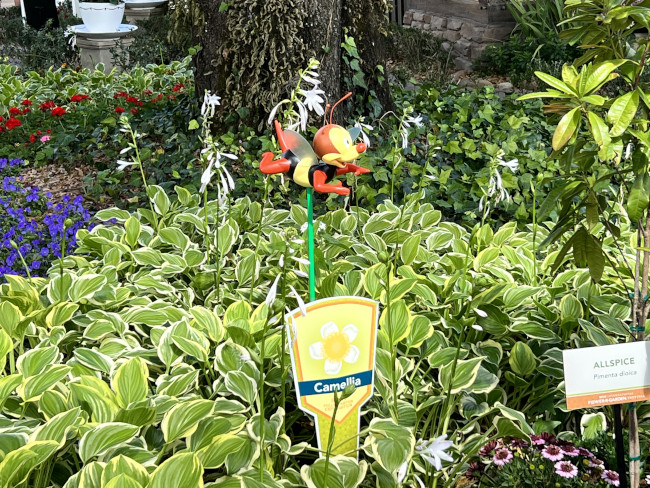 Where to Find Spike: Spike is hiding behind a teacup in the tea garden right across from where you can grab fish and chips in the UK Pavilion.

Plant: Camellia, an evergreen shrub that is used to make tea.

Spike the Bee at the The Honey Bee-stro 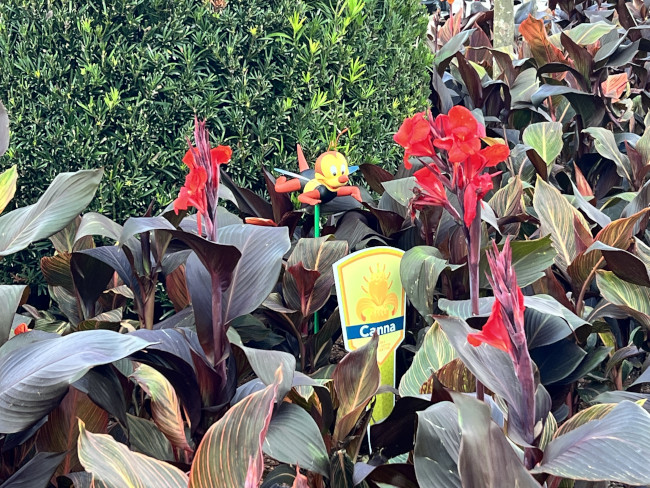 Where to Find Spike: Spike is located diagonally from where you would pick up plastic utensils for The Honey Bee-Stro booth.  He is between the booth and the restrooms and can be difficult to see if people are eating at all of the cafe tables.

Note: This is also where you can purchase your Spike the Bee sipper!

Plant: Canna, a gorgeous flower capable of self-pollination but that still depends pollinators, like bees. 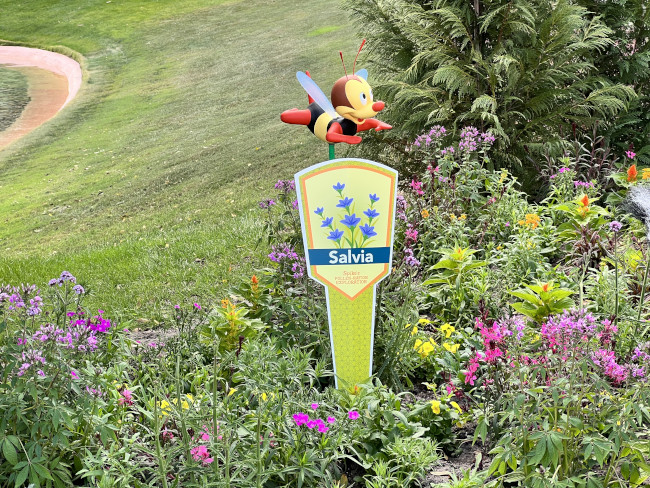 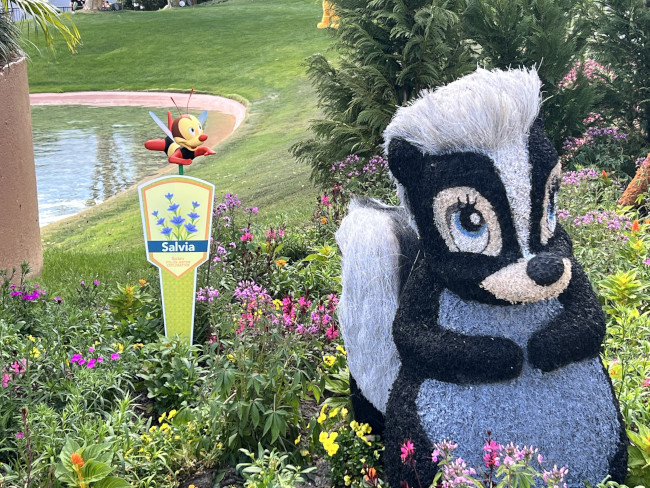 Where to Find Spike: Among the Bambi topiaries, between the butterfly house and Journey into Imagination, you’ll find Spike just behind Flower the skunk.

Plant: Salvia, a flower whose nectar attracts butterflies and hummingbirds. 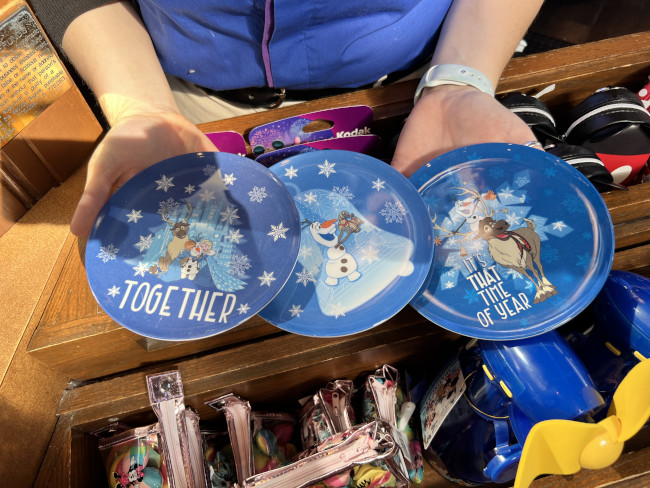 Temporarily, Disney is offering up these plates until the real prizes are in stock. Photo by Julie de la Fe

With your map, you are always guaranteed a prize, regardless of how many Spikes you find (everyone is a winner!).

This year’s Spike’s Pollen-nation Exploration prizes were not delivered yet, so Disney was offering Frozen plates from the recent Olaf Scavenger Hunt until new prizes come.  A Cast Member told me they should be here in a week or two.

The 2022 EPCOT Flower & Garden Festival runs until July 4, so you’ve got plenty of time to find Spike and claim your prize.