How to Find Our Favorite Hidden Mickeys at Disneyland Resort 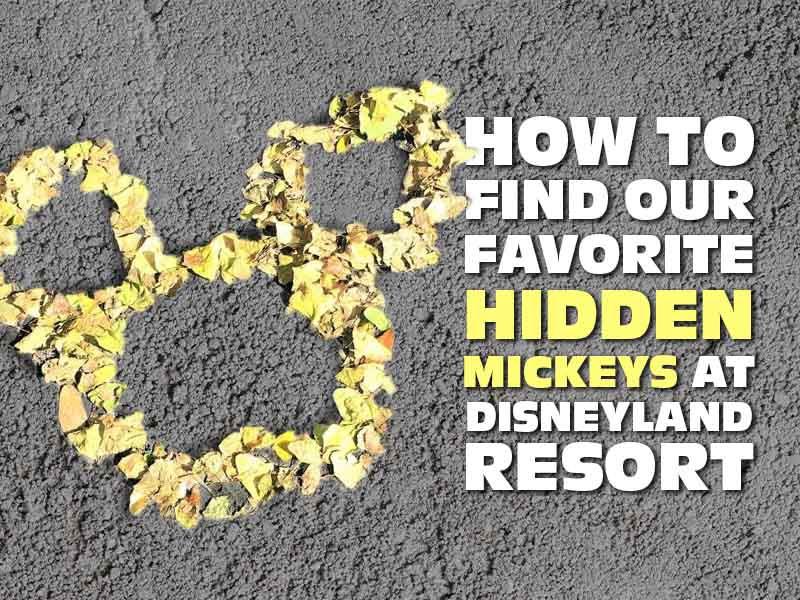 Ready to spot all the toughest hidden Mickeys at Disneyland Resort? We’ve rounded up some of our favorites below. See how many you can spot on your next trip!

If discovering Disney’s Easter eggs is something that excites you as it does me, I’d wager to say you’d also be a fan of searching for hidden Mickeys. Sprinkled around Disney Parks and Resorts, hidden Mickeys add a magical touch to your experience.

What Is a Hidden Mickey? 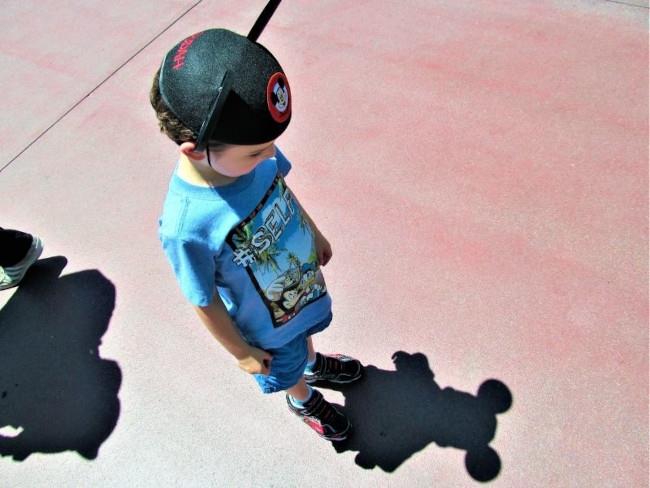 A pair of Mickey ears and some sunlight can make for on-demand hidden Mickeys. Photo by Christy Weinberg

So, what exactly constitutes a hidden Mickey? Simply put, a hidden Mickey is a grouping of three circles in the correct configuration to form the shape of Mickey’s head.

Before you go on your trek to finding these addictive gems, allow me to share some insights for your quest. Though they present themselves in many different forms, hidden Mickeys fall under one of two different categories.

The first types of Hidden Mickeys are those purposely placed within the park. Included are the ones designed by Imagineers, built into the architecture, placed within a ride, or created by Cast Members.

The second types of Hidden Mickeys are the ones that occur by happenstance. In other words, they fit the bill, even though they may not have been deliberately placed. There is no dedicated list to confirm whether a hidden Mickey is intentional or unintentional. As far as Disney is concerned, it’s simple: If a guest thinks it’s a hidden Mickey, then it is!

So now that you’re savvy with the basics of hidden Mickeys, let’s talk about my favorite hidden Mickeys at Disneyland Resort. Make sure to keep your eye out for them on your next trip to the parks! 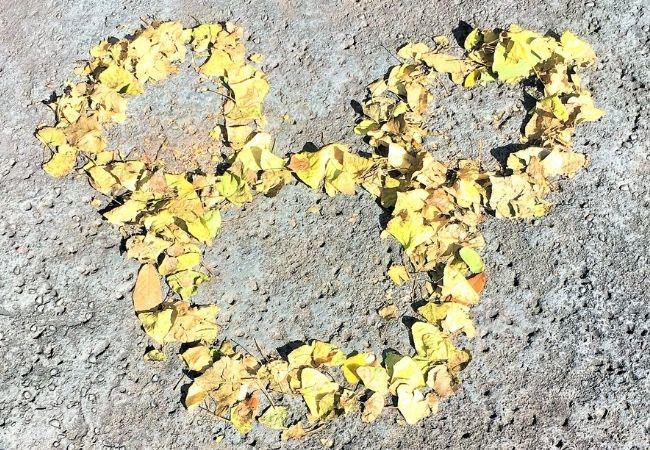 Some hidden Mickeys are temporary… so always keep an eye out. Photo by Christy Weinberg

On one occasion, as I walked through Disney California Adventure, I noticed something I’d never seen before. Lying on the far side of the path, unbeknownst to most passerbys, sat a pile of leaves forming the shape of Mickey’s head.

It was such an exciting find, and it was the only time in all my years as a passholder that I’ve even seen it occur. This hidden Mickey felt extra special as it was clearly left with loving intent by the Cast Member who placed it. What a magic moment!

Love magical Cast Member moments? Become a digital subscriber today to get access to our special Cast Member Magic edition of WDW Magazine, plus over 100 more issues. All for less than the cost of a Mickey Bar!

Over in the Grizzly Peak area, within Redwood Creek Challenge Trail, lies a hidden Mickey especially favored by little ones. Outside the spirit cave, a tiny stream contains some painted rocks, three of which combine to form a more abstract version of Mickey’s head upon first glance. 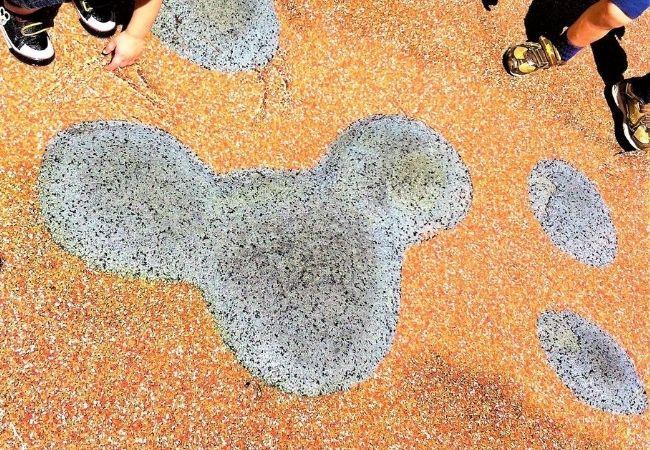 Watch your step for hidden Mickeys on the Redwood Creek Challenge Trail. Photo by Christy Weinberg

If you look closer, you’ll notice that there are three distinctly darker, circular shapes within the form. If there was any doubt before, this proves there is no room for interpretation, as it is indeed a skillfully disguised hidden Mickey.

Hidden Mickeys Outside the Parks at Disneyland Resort 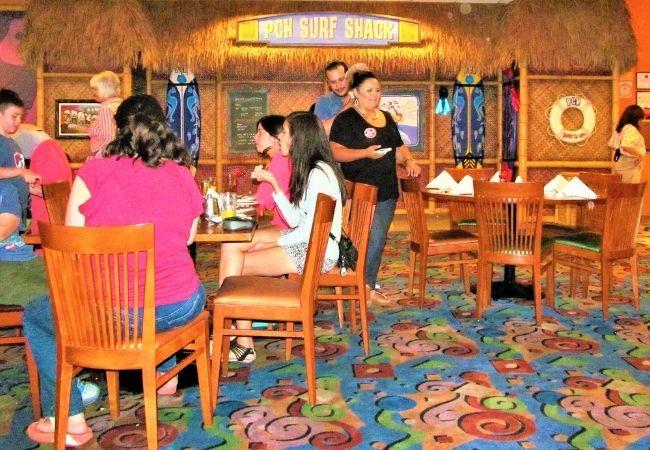 Those swirls on the floor at PCH Grill seem familiar. Photo by Christy Weinberg

Another unique place to find Hidden Mickeys is in the flooring. There are several different sites where you can see them designed into the carpet, but my favorite is at PCH Grill, inside Disney’s Paradise Pier Hotel.

Funky little swirls make up the famous mouse ears shape, and the configuration does not repeat itself in every pattern grouping. This confirms with even more certainty that it is indeed a true hidden Mickey.

Hidden Mickeys During the Holidays at Disneyland Resort 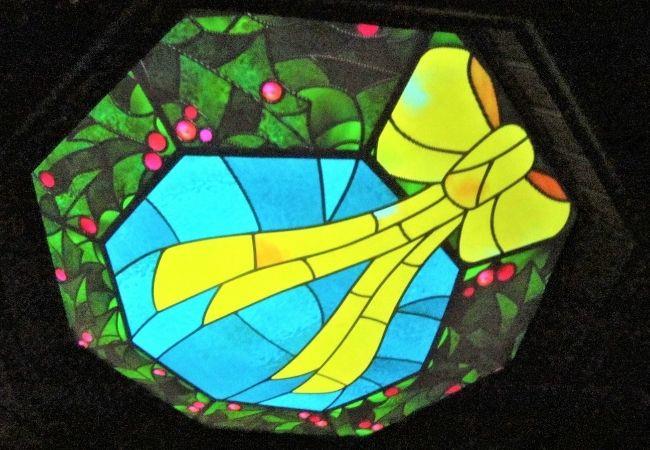 This Mickey is so well hidden that the editor almost threw it out! Photo by Christy Weinberg

Disneyland transforms into a festive, winter wonderland during the holiday season. Changes appear in its décor, as well as within the rides and attractions themselves.

Two of my favorite hidden Mickeys can only be seen during this magical time of year. Both are located within a holiday-overlaid ride. The first Hidden Mickey is definitely one of my top favorites, as it perfectly exemplifies everything a true hidden Mickey should be. Cleverly disguised, yet clearly visible, it’s a rewarding find.

Located within Haunted Mansion Holiday, the symbol is embedded in a wreath on the ceiling in the stretching room. While there are several berries on the wreath, there is only one cluster that definitively forms the classic Mickey shape. 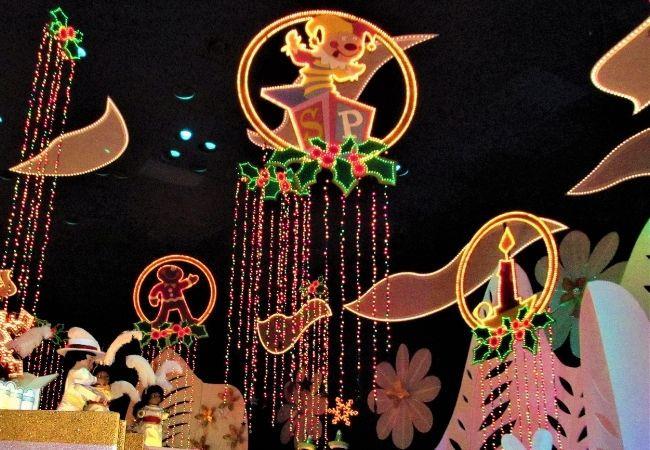 The holiday overlays at Disneyland are full of festive hidden Mickeys. Photo by Christy Weinberg

Over in Fantasyland, a similar Hidden Mickey can be found within “it’s a small world” Holiday, near the end of the ride. Once you arrive in the finale room, look for the places where the holly perfectly combines to form Mickey’s face and ears. 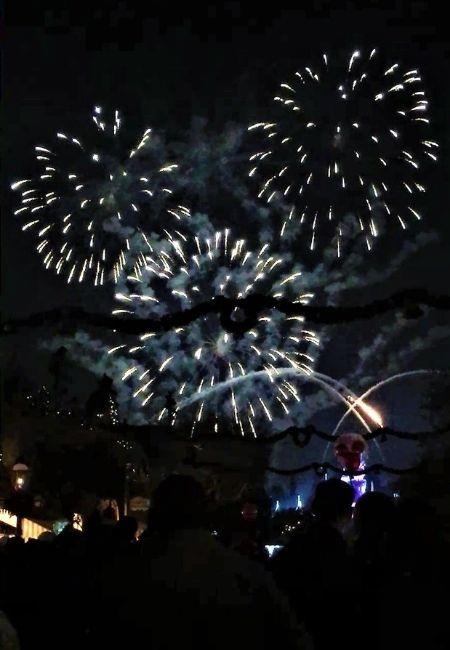 While this one isn’t all that ‘hidden’, it’s still easy to miss if you don’t look up! Photo by Christy Weinberg

The fireworks at Disneyland Resort have always been a cherished favorite among guests, and within this spectacular lies a tribute to the mouse that started it all. As you gaze up into the sky, you’ll notice the classic Mickey ears shape bursting forth throughout the show, eliciting oohs and ahhs amongst the audience! 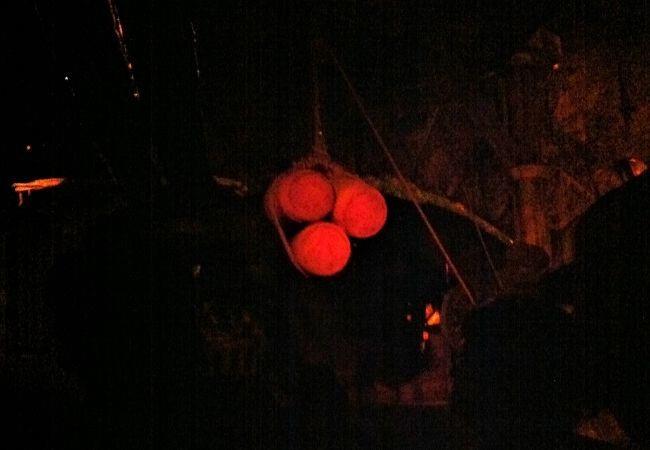 Those three barrels look awfully Mickey-shaped to me! Photo by Christy Weinberg

My personal, all-time favorite Hidden Mickey resides in the Pirates of the Caribbean attraction in Disneyland Park. Located near the end of the ride, before you reach Jack Sparrow and his ill-gotten gold, three barrels hanging from a rope make the perfect configuration of our favorite mouse.

Discovering hidden Mickeys at Disneyland Resort creates joy and excitement all around. It adds another layer to the magic we treasure so much as loyal Disney fans.

The Purpose Behind Hidden Mickeys

I’d venture to say the purpose of Hidden Mickeys lies in the excitement of the discovery, rather than the preciseness of the find. Being too focused on perfection removes the element of fun and diminishes creativity as part of the process.

So, if you’re at one of Disney’s parks, and you find your own hidden Mickey, no need to look any further for confirmation. You can rest assured—what you’re looking at is real.

REVIEW: We tried ALL the Skewers at Bengal Barbecue at Disneyland