How Did Scar Get His Scar in The Lion King? Scar’s Backstory Revealed 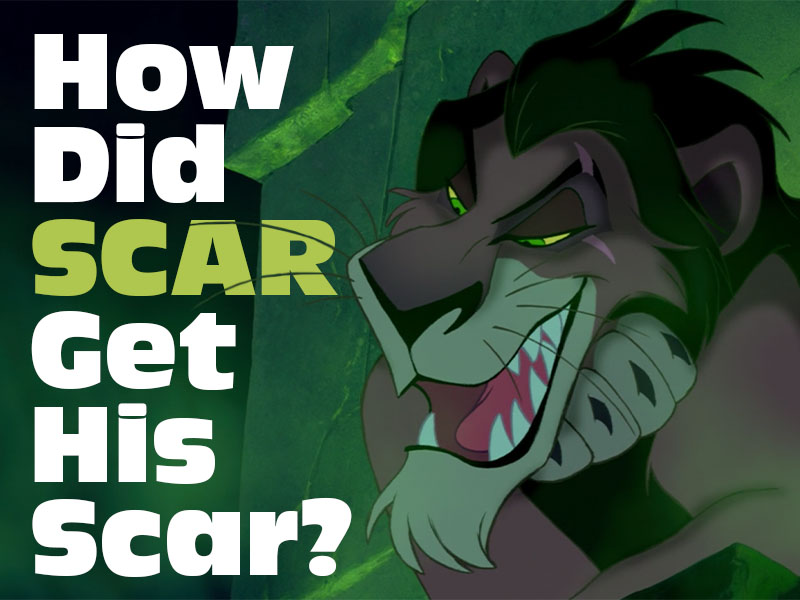 Ever asked yourself, “How did Scar get his Scar in The Lion King?” Dive deep with us into Scar’s backstory for the answer.

In the pantheon of Disney Villains, Scar ranks near the top. Scar shows that he’s willing to do whatever it takes to be king of the Pride Lands—even if it means killing his own family.

But like so many other classic Disney baddies, there’s more to Scar than his evil acts. (And they are downright evil.) He has a complex backstory that makes him every bit as fascinating as he is nefarious.

Let’s dive in and learn everything you’d want to know about Scar’s backstory—including how he earned his most distinguishing feature.

Scar is defined by his, well, scar … but how did he get it? Photo courtesy of Disney

Scar is the primary antagonist of the 1994 Disney smash hit The Lion King as well as the 2019 remake and the Broadway musical. He also appears in some form in various sequels and spin-offs.

He cements himself as one of the most dastardly villains in Disney history by murdering his own brother, Mufasa. His goal, above all else, is to rule the Pride Land with a cruel coolness. But was he always such a bad cub?

It’s important to note that Scar wasn’t always called Scar. He was born with a different name—but the name depends on which origin story you follow.

There are two canonically accepted backstories for Scar. One comes from A Tale of Two Brothers, the 1994 book penned by Alex Simmons. The other comes from The Lion Guard, which consists of a 1-hour movie and a show that ran on Disney Junior from 2016–2019 (more on this later).

Scar’s Backstory from A Tale of Two Brothers

Scar is born to Ahadi and Uru and given the name Taka. Before you go saying that it’s a pretty name, keep in mind that it’s a word most commonly used in Swahili to indicate trash or garbage.

So, naturally, Taka would have a bit of a chip on his shoulder. That chip only grows larger when he finds out that his brother, Mufasa, has been chosen to rule the Pride Lands.

This sets Taka off on a course the leads him to become friends with hyenas Shenzi, Banzai, and Ed. They convince Taka to set his brother up to look like a failure so he can surpass him in line for the throne—a decision that has severe consequences for the lion who would become Scar. 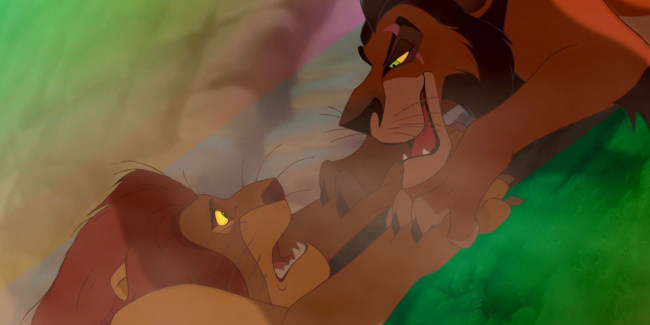 Was Scar always this bad? Photo courtesy of Disney

Scar’s Backstory from The Lion Guard

Scar is born into somewhat kinder circumstances according to his origin story from The Lion Guard. He shares the name Askari with his ancestor, a noble lion who once led the Lion Guard.

In this story, the second-born child of the king is not treated as waste. Instead, Askari has a major responsibility: Lead the Lion Guard and defend the Pride Lands and the Circle of Life.

To do this, he’s given a great power: the Roar of the Elders. With this ability, his roar is accompanied by the roars of the Great Lions of the Past.

But unlike Spider-Man, Askari can’t manage this great power and responsibility. He’s tempted by another lion to want Mufasa’s place as rightful king, and that desire leads him into a fateful trap.

How Did Scar Get His Scar in The Lion King?

As both stories diverge on so many points, so too do they disagree on how Scar got the scar across his eye.

In A Tale of Two Brothers, the three hyenas convince Taka to bait Mufasa into a fight with Boma, a powerful Cape buffalo lording over a waterhole. When those efforts fail, Boma and his herd turn their attention toward Taka.

Taka is attacked by a buffalo, which slashes him across the eye. He’s ultimately rescued by King Ahadi after Mufasa’s attempt to save his brother falls short, but the damage—literally and figuratively—has been done.

In The Lion Guard, the strange lion lures Askari into a trap where he is attacked by a cobra. The snake bites Askari on the eye, leaving the scar that would become his namesake.

But the cobra leaves more than that. The venom from the bite infects Scar, making him crueler and more bitter. This leads him down the path of wanting to use the Roar of the Elders to overthrow his brother. 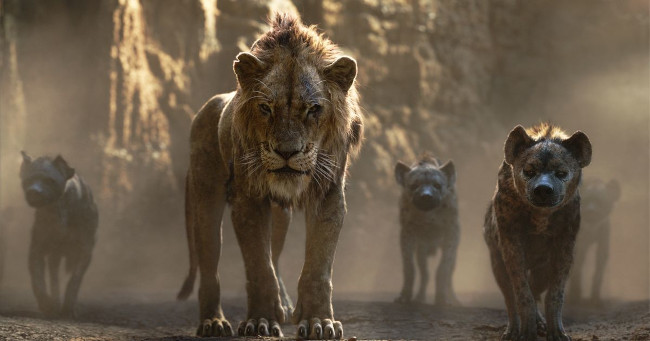 Scar’s backstory changes yet again in the live-action (CGI) remake from 2019. Photo courtesy of Disney

In 2019’s CGI/live-action remake of The Lion King, his backstory differs again. It’s implied through context that Scar’s scar comes from a fight with Mufasa.

About The Lion Guard

Scar’s origin is revealed in the 2015 Disney Channel movie The Lion Guard: Return of the Roar. The two-part premiere episode of Lion Guard’s third season, “Battle for the Pride Lands,” grows the backstory.

Scar, poisoned by the cobra and becoming more evil, tries to convince the Lion Guard to help him overthrow Mufasa. When they refuse, he uses the power to destroy the Lion Guard.

The Great Lions of the Past strip Scar of the roar. This leaves him powerless, angry, and hungry for revenge.

This leads into the events of The Lion King, and the show picks up in its aftermath with Simba and Nala preparing their son, Kion, for his future as the leader of the Pride Lands.

Though Scar is dead, his is an evil that doesn’t truly die. During the show’s second season, the villain is revived in a volcano and manifests in the form of a fiery spirit.

Scar forms the Army of Scar, which sets out to reclaim the Pride Lands from Simba. His army is met by the reformed Lion Guard, headed up by Kion, the possessor of the Roar of the Elders.

In “Battle for the Pride Lands,” Scar has the cobra Ushari attack Kion, leaving him with a scar of his own. But Kion forgives Scar before using the Roar of the Elders to destroy him once and for all.

Before he disappears, Scar tries to sew discord one last time, telling Kion that the power he defeated him with is in fact a curse.

Kion seeks the healing of the Tree of Life to purge himself of the venom that corrupted this great uncle. This becomes the main thrust of the remaining episodes.

What Happens to Scar at The End of The Lion King? 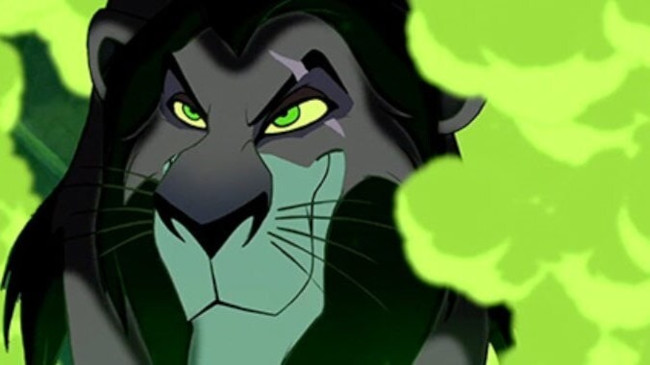 Scar meets a fate as cruel as him. Photo courtesy of Disney

While there are different interpretations of how Scar came to be what he is, there’s one fate for him at the end of The Lion King.

Scar kills his brother, Mufasa, and convinces Simba that his death is his fault so that he’ll flee. Scar then takes control of the Pride Lands as the unrightful king.

After Scar and the hyenas spend years draining the land, Simba returns to his former home with his friends Nala, Timon, and Pumbaa to confront his uncle. Scar admits his crime to Simba, and the fight for the throne commences.

In the final battle atop Pride Rock, Scar attempts to blame his misdeeds on Shenzi, Banzai, and Ed. When Simba defeats him, he’s cornered by the minions he just betrayed. And they’re hungry. Very hungry.

Yes, Scar is killed and eaten by hyenas. A fittingly nasty end for a nasty lion, don’t you think?

Who Plays Scar in The Lion King?

The actor most people associate with the role of Scar is Jeremy Irons. The legendary actor voices the villain in the 1994 animated feature.

Though he ultimately took the role, Irons was skeptical until he saw test animation for the film. Before Irons, Disney considered a pair of other famous faces (and voices) who frequently play baddies: Malcom McDowell and Tim Curry.

Irons lends Scar a Shakespearian eloquence and villainy that solidifies him as one of the most memorable in Disney history. Critics loved it too—Janet Maislin calls Irons “delectably wicked” and “one of film’s chief delights.” Gene Siskel even argues that Scar is the best character in the film.

The inspiration for the character comes from Hamlet’s King Claudius, which is fitting given Irons’ classical training at the Bristol Old Vic Theatre School.

Funny enough, Irons has performed Shakespeare on the stage many times over the years. He’s never done Hamlet, however. Perhaps Scar is the closest we’ll get.

Irons also draws some inspiration from a notable performance in his career. His delivery of the line “You have no idea” mirrors that of the same line in 1990’s Reversal of Fortune.

In that film, Irons again plays a villain—this time, a lawyer accused of attempting to murder his wife. For that performance, he won the 1990 Academy Award for Best Actor.

Almost makes you think that Jeremy Irons is really, really good at this whole acting thing.

Have Any Actors Other Than Jeremy Irons Played Scar?

Irons famously did 10–15 takes for every line in The Lion King. However, there are a few lines he didn’t deliver in the film. Jim Cummings sang the last few lines of “Be Prepared.”

Why? Because Irons’ voice gave out after bellowing “You won’t get a sniff without me.” That and all those takes probably didn’t help.

This wasn’t the last time Cummings or another actor would attempt to fill Irons’ huge shoes (or paws, as it were).

Scar also appears in the video game Kingdom Hearts II and the now-closed interactive attraction Sorcerers of the Magic Kingdom. James Horan provides the voice in both.

James Avery plays the diabolical lion in Animated StoryBook: The Lion King, the 1994 PC retelling of the movie. You may recognize Avery as Uncle Phil from The Fresh Prince of Bel-Air. He’s also known for voicing another villain: He played Shredder in the original Teenage Mutant Ninja Turtles animated series.

Who Plays Scar in The Lion Guard?

David Oyelowo is the voice of Scar in The Lion Guard. Oyelowo is perhaps best known for portraying a polar opposite character in the 2014 film Selma, playing Martin Luther King Jr.

For 2019’s The Lion King, Disney tapped another classically trained British actor for the role: Chiwetel Ejiofor. Like Irons, Ejifor has appeared in several Shakespeare plays (but never Hamlet) as well as in films like Doctor Strange and Maleficent: Mistress of Evil.

Who Plays Scar on Broadway?

And, of course, there’s the hit Broadway musical adaptation of The Lion King. Since 1997, several talented thespians have played Scar. That includes John Vickery, who originated the role.

Other actors who have played Scar on the stage include Patrick R. Brown, Rob Edwards, Patrick Page, Larry Yando, and Mark Campbell. It’s safe to say that Scar contains multitudes.

Without a doubt, Scar is one of the most recognizable characters, let alone villains, in Disney’s long history. And though we know his fate (and his second fate), it’s a safe bet that we haven’t seen the last of him yet.

Who is your favorite Disney Villain? Visit the WDW Magazine Facebook page and tell us which nefarious ne’er-do-weller you cherish (or loathe) most.