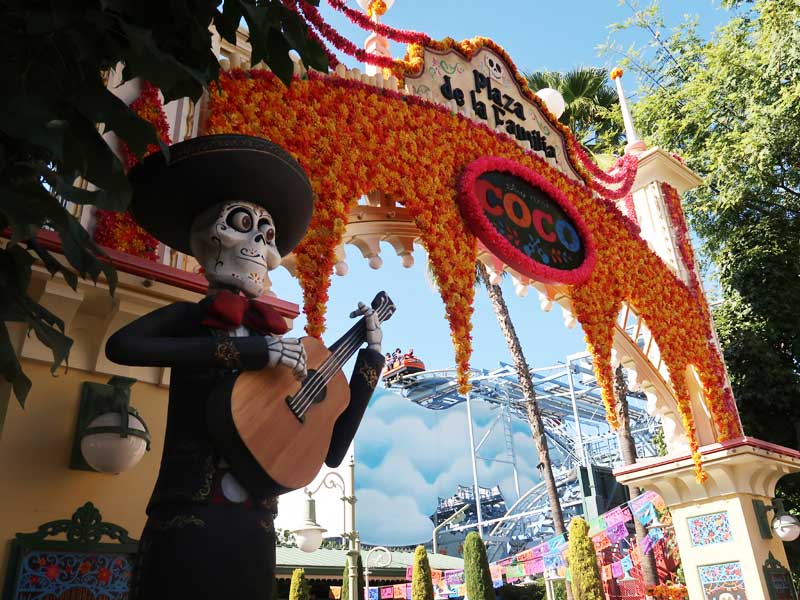 Bring the familia! Hispanic and Latin American Heritage Month at Disneyland is here…

September 15 to October 15 is Hispanic and Latin American Heritage Month, which means it’s time to commemorate the history, current contributions, and culture of people from Mexico, Central & South America, and the Caribbean.

We urge you to look and see if there are ways to celebrate in your community. If you’re heading to Disneyland, you can participate in the festivities in the Downtown Disney district and at Disney California Adventure Park’s Pixar Pier. 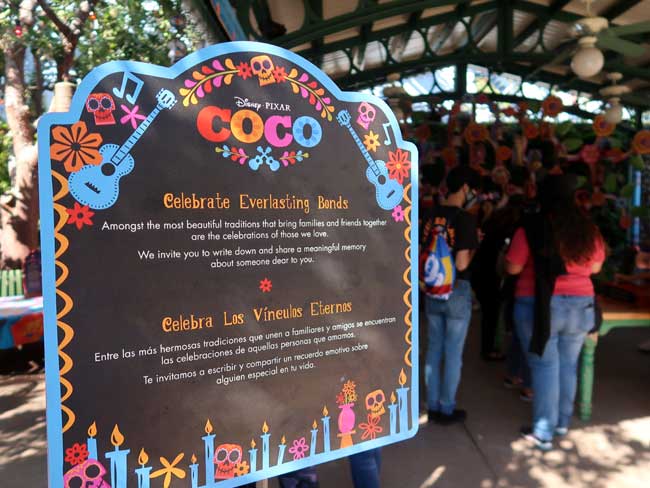 When you’re inside the Disney California Adventure Park, head towards Pixar Pier for an immersive Hispanic and Latin American Heritage Month experience. The Paradise Gardens area has been turned into the Plaza de la Familia. It’s full of decor for the upcoming Día de los Muertos. 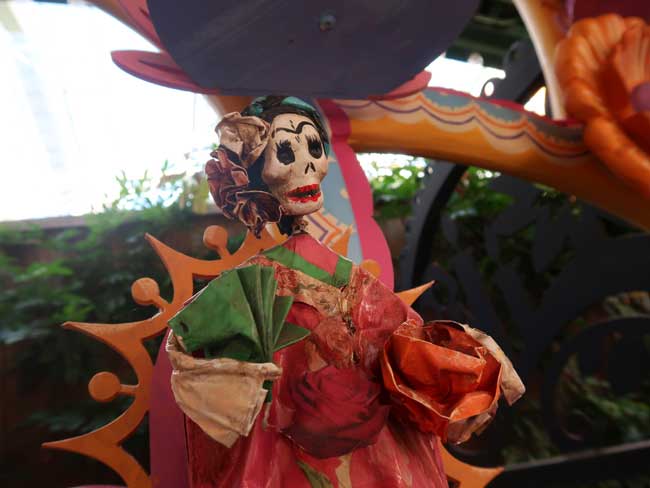 Handmade decor goes beyond the veil. Photo by Rain Blanken

This is the place to meet Miguel, the star of Coco, and take the best photos for your Instagram. We know that’s where the pictures are going, we don’t judge. 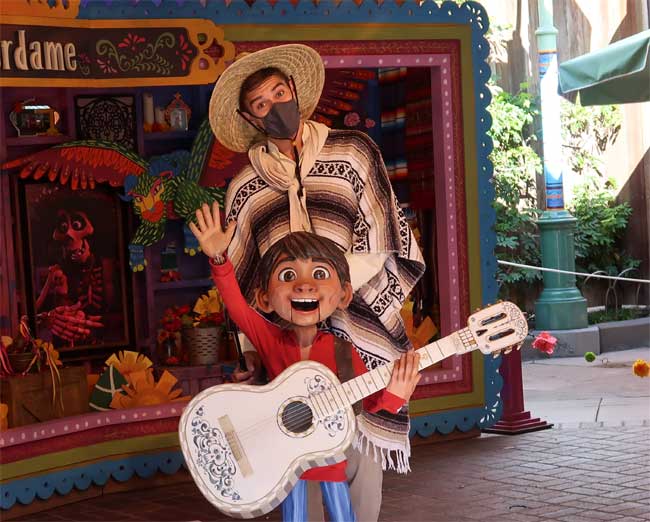 The plaza is also home to “A Musical Celebration of Coco.” If you’re like me, be ready to get choked up at the show because Disneyland prominently features “Remember Me” in event promotion.

You probably remember that Coco features a large ofrenda to honor the members of Miguel’s family. In a combination of art and honor, Disneyland created a Mexican Árbol de la Vida, or Tree of Life, near its Paradise Garden Grill. 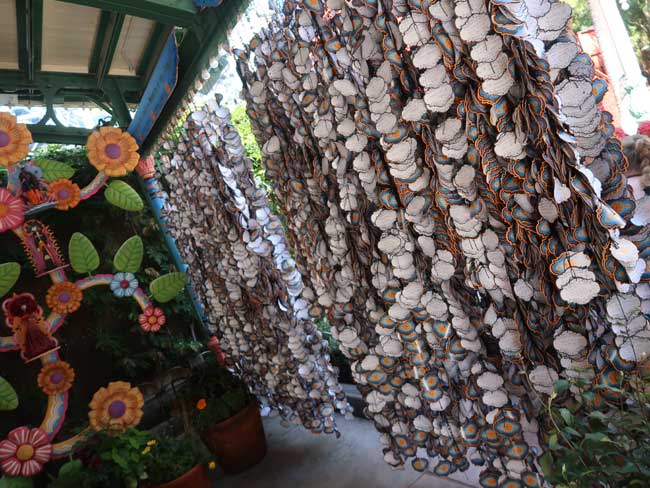 Visit the ofrenda to leave a message for those who left us behind. Photo by Rain Blanken

Not only can you admire the art that makes up the tree, but you can also leave messages to those you have loved and lost in your own life. 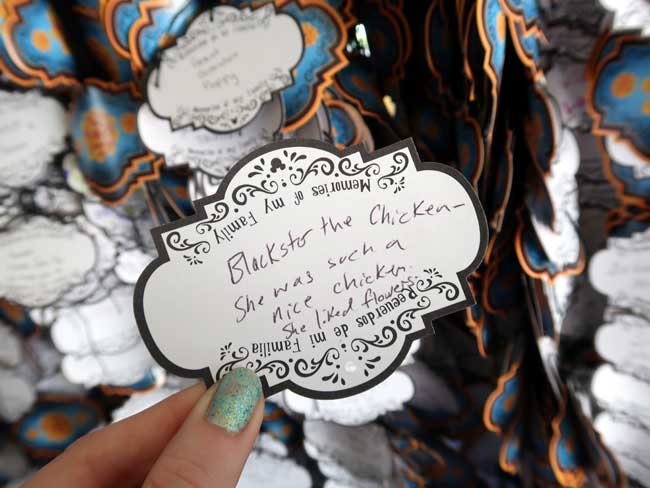 While you’re in Paradise Gardens with the Árbol de la Vida, keep a look out for craft tables. You and your kids can make masks of the spirit guides, or alebrije, of Coco, Dante and Pepita, that you can take home to remember your experience. 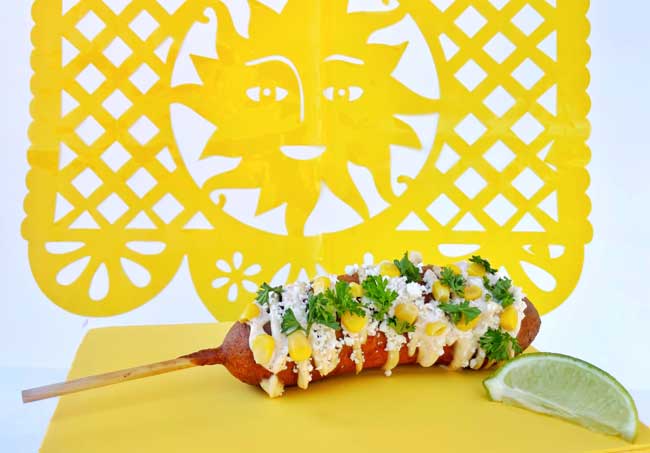 They made corndogs even better?!? Image via Disney Parks Blog

Let’s be honest — one of the best ways to learn about a culture is through its food. If you agree with us, there are plenty of ways to celebrate Hispanic and Latin American Heritage Month with food at Disneyland.

When you and your family are in the Plaza de la Familia, Paradise Garden Grill’s seasonal menu is full of Mexican food options for you to savor, like elote and tamales. The restaurant’s bandstand will also host Mariachi concerts at select times.

If you love a Disneyland churro but want to try a new flavor, Goofy’s Churro Cart has a horchata churro through November 6. You can also head to Boardwalk Pizza and Pasta for horchata cheesecake and carnitas pizza.

These are just the tip of the iceberg. You can take a look at the Disney Foodie Guide for a complete list of goodies (like mole wings that sound divine) and where to find them. If you’re visiting Walt Disney World, there’s also a list of Hispanic and Latin American Heritage Month food available at its properties. 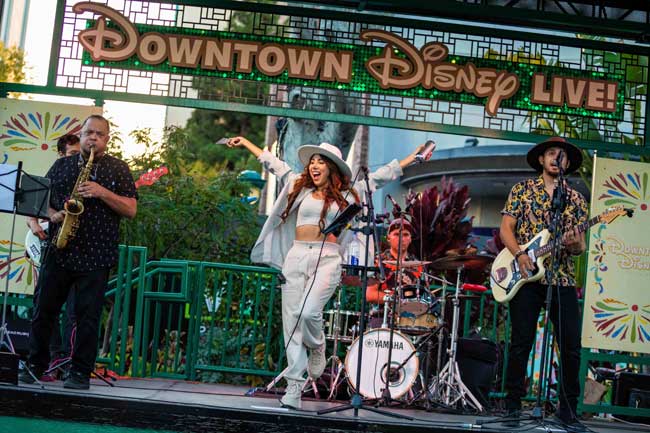 One of the best parts about the Hispanic and Latin American Heritage Month celebration at Disneyland is that a lot of it is in the Downtown Disney district, which you can access without the price of a park ticket.

This makes it easier to participate and allows the local community to join in if they wish.

If you’re ready to dance in the evenings, there will be live Hispanic and Latin American music on the Downtown Disney LIVE! Stage. The official Disneyland blog says that groups gracing the stage include the Tina Aldana Band, Julian Torres y Mariachi Cenzontle, El Sabor Bueno, and Estilo Tumbao Band.

The GCH Craftsman Bar at Disney’s Grand Californian Hotel & Spa will also host music on weekend afternoons from the Dylan Carbone Duo and El Sabor Bueno if you’re staying there or dining. 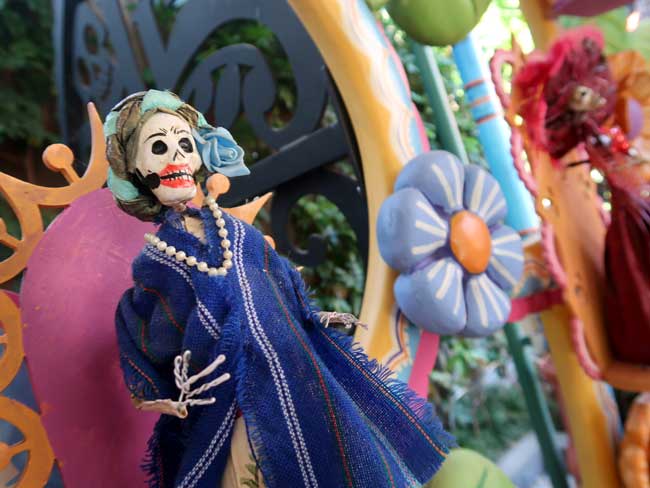 There are many things to do at Disneyland to celebrate the visual art that comes from Hispanic and Latin American cultures and creators.

Encanto’s home of Colombia is represented in Downtown Disney with silletas, a type of floral display. In the Disney version on view, flowers surround 27 flags. They are for the 27 countries from which Latin American and Hispanic people derive their heritage. I’m sure that Isabela Madrigal is a huge fan of these displays and their different floral varieties.

As we mentioned, you can visit a Coco-inspired Árbol de la Vida inside the park itself, but you can still appreciate art from the film in Downtown Disney. Artist Asia Ellington has created a mural wall in the area that celebrates the Plaza de la Familia and all of your favorite characters from Coco.

When you’re ready to flex your creative muscles, crafts will be set up in front of the Downtown Disney LIVE! stage through October 16 from noon to 6 p.m. The projects revolve around learning about monarch butterflies, toucans, and scarlet macaws.

We know this article is long, but there is so much to do at Disneyland to celebrate Hispanic and Latin American Heritage Month! If you’re looking to break free from pumpkin spice lattes and learn more about a different culture (or celebrate your own), consider one of these activities.