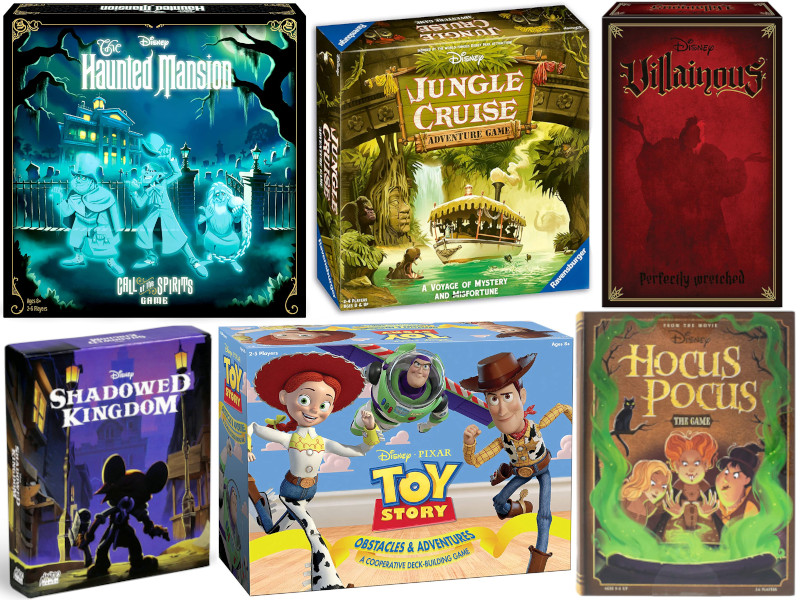 Looking for the best Disney themed board games to gift to your friends and family this holiday season? Here are our picks.

Board games provide hours of memorable, unplugged interactions and brain-teasing dilemmas around the dinner table during a night at home together.

In the past year, multiple Disney-themed board games have arrived on store shelves, ranging from simple matching games for families to challenging cooperative missions for adults.

Here are six new products that could make great gifts this year!

To help keep our site free of table-flippingly annoying ads, we have included affiliate links in this post. Thanks for helping us keep our blog ad-free! If you’d like to support us directly, consider subscribing to our print edition

1. THE HAUNTED MANSION: CALL OF THE SPIRITS GAME 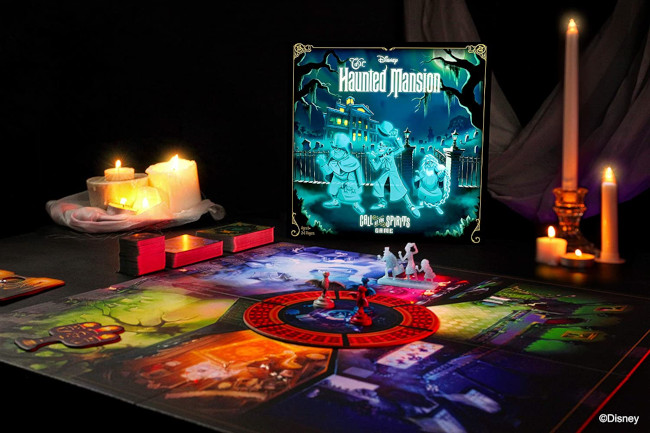 The first of two games released this year based on Disney Parks attractions, The Haunted Mansion: Call of the Spirits Game invites you to step through the ghoulish gates of the beloved manor.

As a visitor, you’ll wander through the mansion to collect certain ghost cards, which will earn you points to win the game.

You’ll start in the endless hallway, a rotating rotunda in the middle of the board, and access six adjacent areas throughout the building to search for the cards you need. 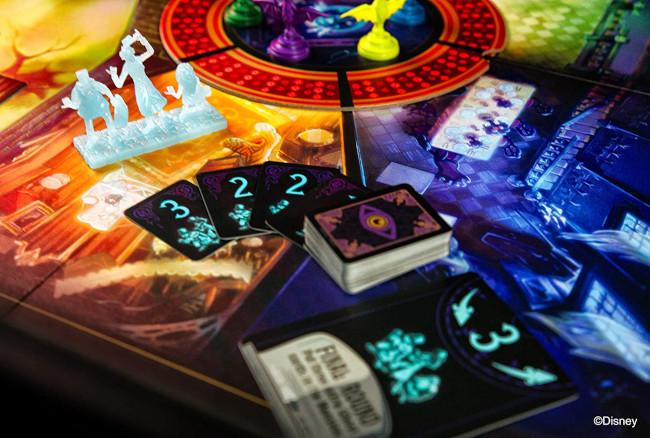 If you want a spooky game to play during October that’s family-friendly, this is a great choice.

The atmospheric artwork has a charming hand-drawn animation quality to it, depicting locations and ghosts you’ll recognize from the ride.

The Haunted Mansion: Call of the Spirits Game involves some light strategizing and decision-making but is fairly simple overall, so this is a good one to play as a family if you have children of differing ages. 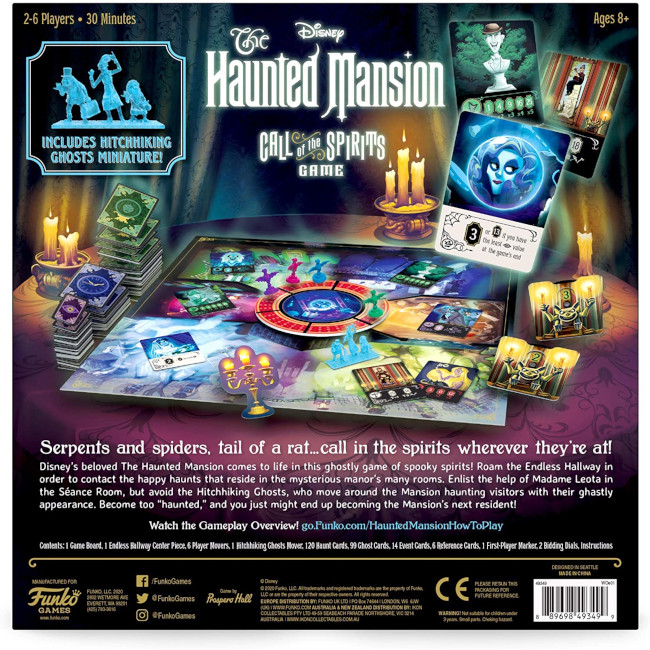 It can accommodate up to six people and works best with at least four players.

Funko Disney The Haunted Mansion – Call of The Spirits Board Game 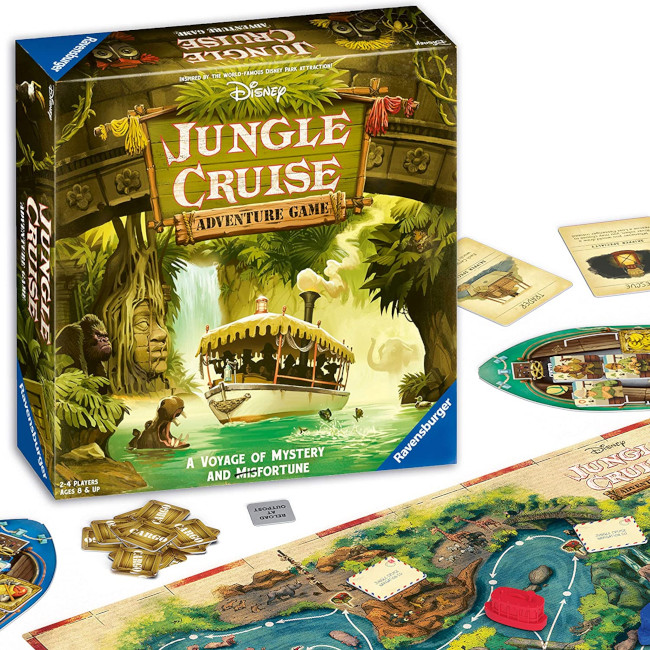 The other ride-inspired game released this year, Disney Jungle Cruise Adventure Game makes you the skipper of your very own vessel as travel on a voyage through the perilous jungle to Jungle Navigation Company Headquarters.

Roll the dice and pilot your boat across the map, following the winding river to locations where you can collect cargo and passengers.

Draw navigation cards equal to your movement and try to avoid disaster as you roll to overcome these obstacles. Whoever has the highest score when reaching Headquarters wins the game! 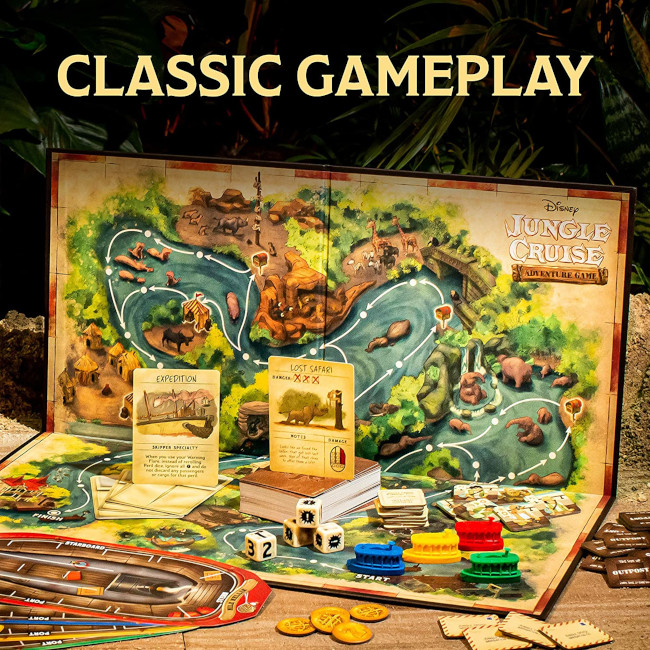 If you’re a fan of traditional roll-and-move games you played as a child and have a young one who would like the Jungle Cruise ride, consider Disney Jungle Cruise Adventure Game.

It’s a simple, linear game that requires a lot of luck to win, but that may be up your alley. 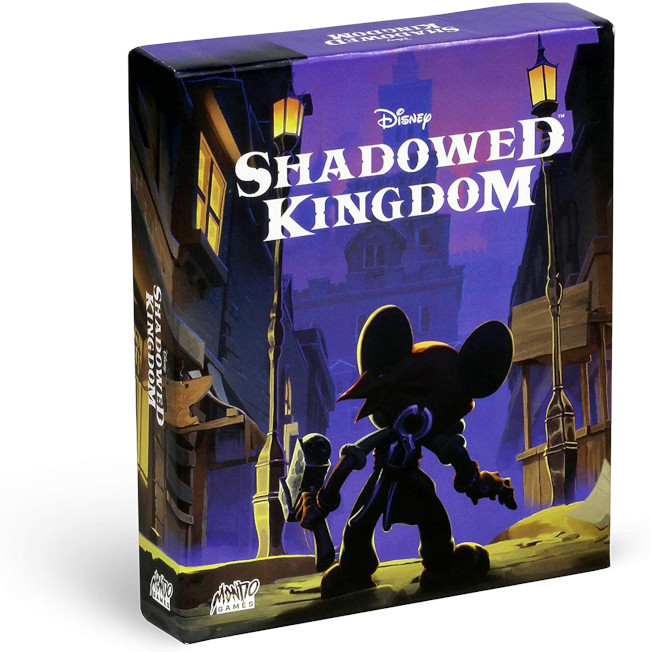 Prefer a cooperative game that requires you to work together to win? Disney Shadowed Kingdom needs you and a second player to team up to save The Kingdom from the invading Shadow.

Choose to play as one of the six beloved Walt Disney characters—such as Mickey Mouse or Daisy Duck—each with a unique special ability.

You’ll take turns placing cards face-down on a communal grid in hopes of gradually dispelling bad cards and activating good cards by sliding around their positions. 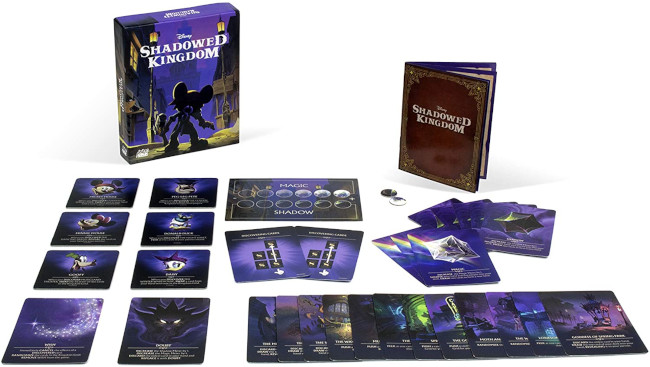 Sounds easy, right? The challenge is that you can’t speak about the cards you play, and you have to remember which cards are where without peeking!

Disney Shadowed Kingdom is a fairly simple memory game with some extra rules added on, so this is probably most suitable for an elementary-age child to play with a parent, since it also requires reading and recalling information. 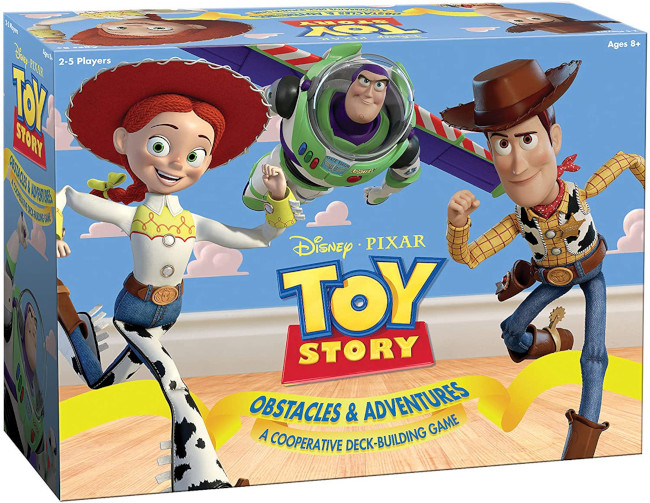 If you want a cooperative game that’s more challenging and immersive, pick up Toy Story: Obstacles and Adventures, which was released last year.

It’s a game that adults and teenagers will enjoy playing together, especially if you grew up watching the Toy Story movies.

Each player will select their favorite character to play as and must work cooperatively to win the game, strategizing to decide which cards to play when to successfully complete the mission. 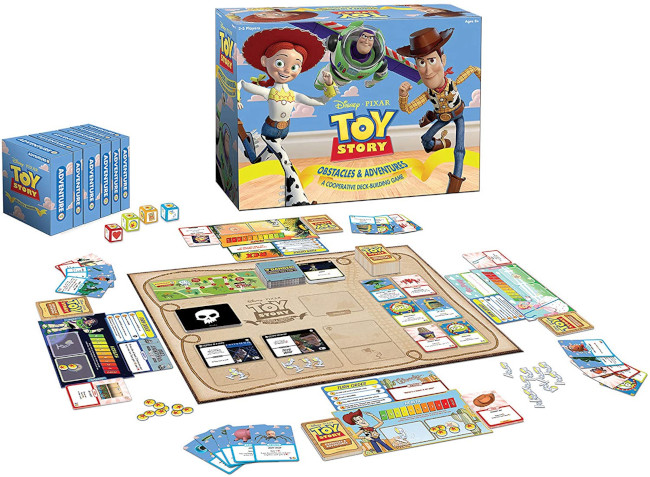 You have to keep your health meter from plummeting while playing cards to overcome hazards and expand your abilities, gradually adding more cards to your personal deck.

The game doesn’t end when you achieve victory, though — you’ve only made it through the beginner’s portion.

Toy Story: Obstacles and Adventures is a six-chapter campaign that begins with the plot of the first film. 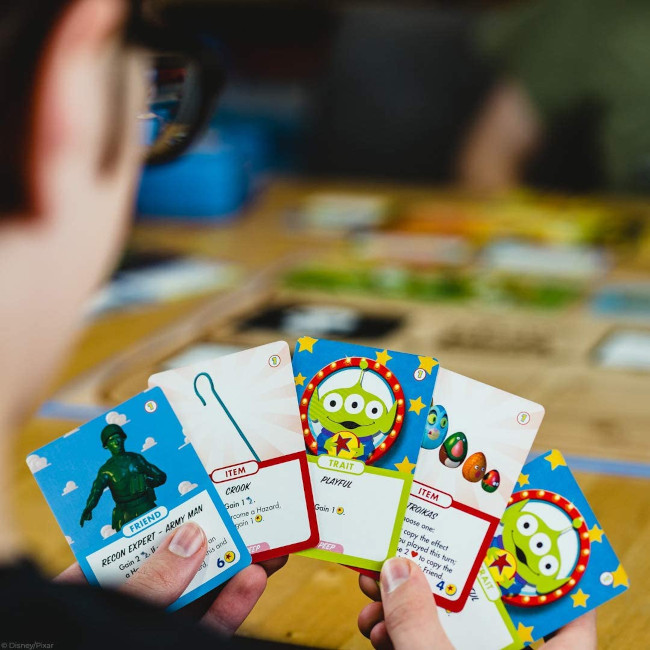 Once you successfully work as a team to overcome the starting-level challenge presented to you, you’ll open the next sealed box, which unlocks more characters, abilities, and hazards.

Although Toy Story: Obstacles and Adventures bears a higher price tag than other games on this list, it definitely earns its cost, offering many hours of increasingly difficult and nail-biting gameplay, steadily progressing in complexity. 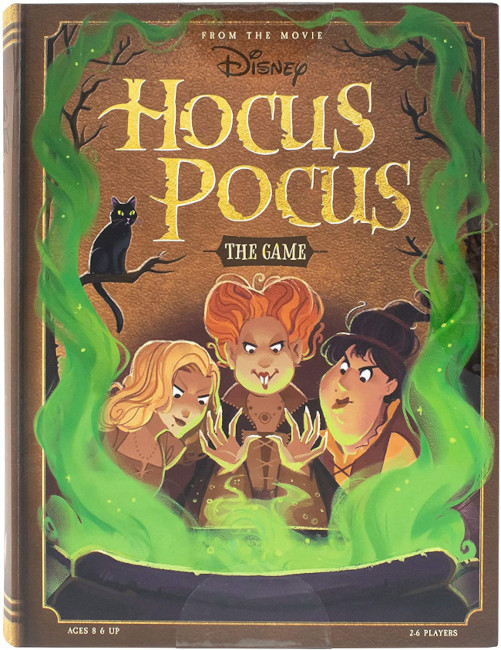 Another spooky game for your Halloween festivities, Hocus Pocus: The Game is based on the 1993 cult classic film starring your favorite three witches.

It’s up to you and 1-5 other players to unite and foil the Sanderson sisters’ plans three times before the sun rises.

To do so, you’ll work as a team to collectively playsets of cards with certain matching symbols or colors. 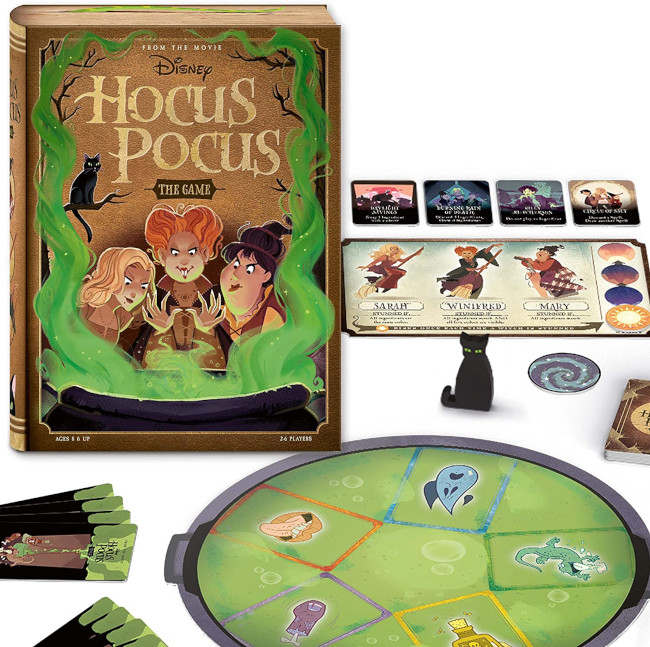 That will be harder to coordinate than you think since you can only ask certain questions and receive limited information on what cards your teammates possess.

Although the rules for Hocus Pocus: The Game are fairly simple, achieving victory is quite challenging, so don’t expect to win every time you play.

You’re all relying on each other without being able to discuss strategy, so be prepared to exercise patience when things don’t work out!

Ravensburger Disney Hocus Pocus: The Game for Ages 8 an Up – A Cooperative Game of Magic and Mayhem 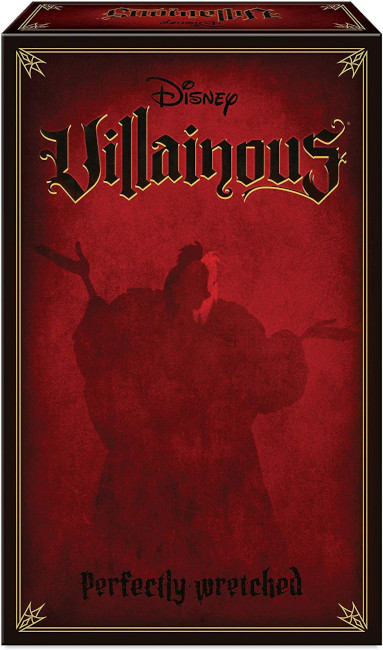 If you love board games and classic Disney movies, you’ve surely played Disney Villainous by now. And if you haven’t, you’re missing out!

Possibly the most acclaimed Disney-themed board game ever released, Disney Villainous is made for adults who like complex challenges that require many strategic decisions.

This year, publisher Ravensburger released its third expansion to the base set. Disney Villainous: Perfectly Wretched allows you to play as Cruella de Vil, Mother Gothel, or Pete.

The nice thing about all Disney Villainous expansions is that each one is playable on its own with 2-3 players, but it can also be combined with the base game to mix and match characters. 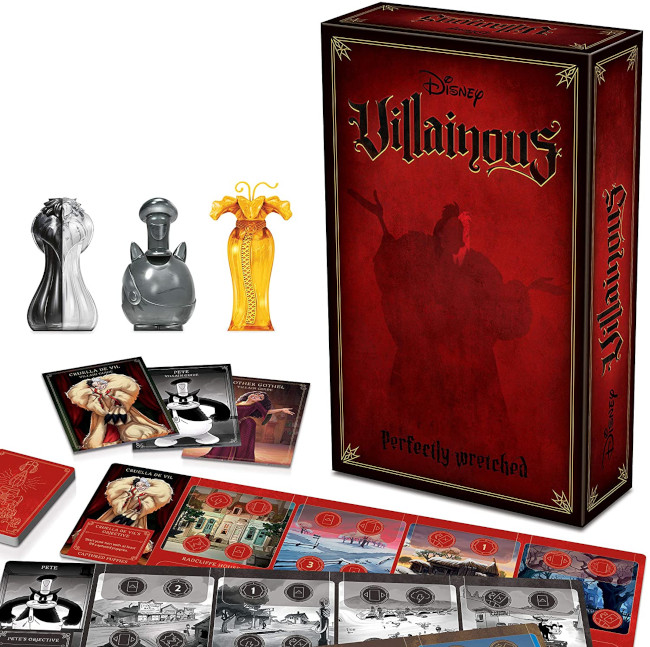 So, if you purchase all four Disney Villainous boxes, you’ll have 15 baddies to choose from!

Each player has their own individual board that corresponds to their chosen villain, providing unique locations and abilities based on from that character’s movie.

On your turn, you’ll move to a different place and perform the associated action, gradually moving closer to your own unique victory goal.

Hopefully you’ll be able to reach your win conditions faster than your opponents do!

Although Disney Villainous is a competitive game, you’re mostly focusing on your own board and specific situation, rather than reacting to other players’ actions.

So, if you’re not confrontational and prefer a game that doesn’t involve direct conflict, you’ll appreciate the autonomy that Disney Villainous offers.

Disney Board Games are Perfect Gifts 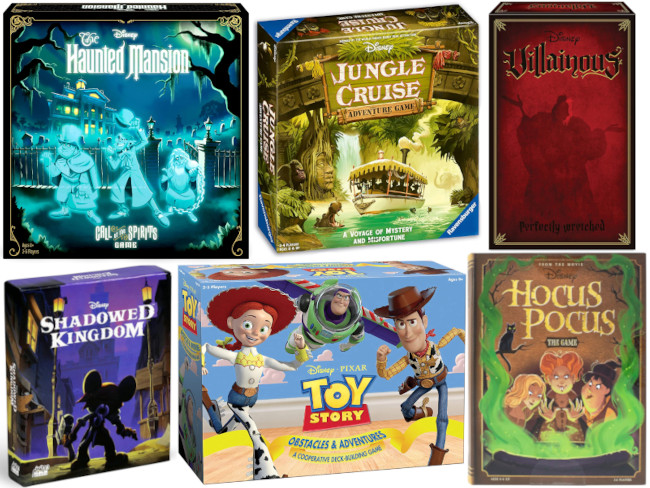 I love playing board games with my friends and family, and I’m excited that so many new Disney-themed titles have been released recently. Hopefully one of these titles is a good fit for your family and makes it onto your holiday gift list.

If you end up purchasing and playing any of these, let us know what you think of it!

Looking for more ways to Disnify YOUR holidays? Consider signing up for our newsletter, so you never miss a beat, and head over to our Facebook page to tell us about what Disney Board Games YOU’RE planning on playing this holiday season!