Galaxy’s Edge Food: The 7 Best Things I Ate (And Drank!) On Batuu 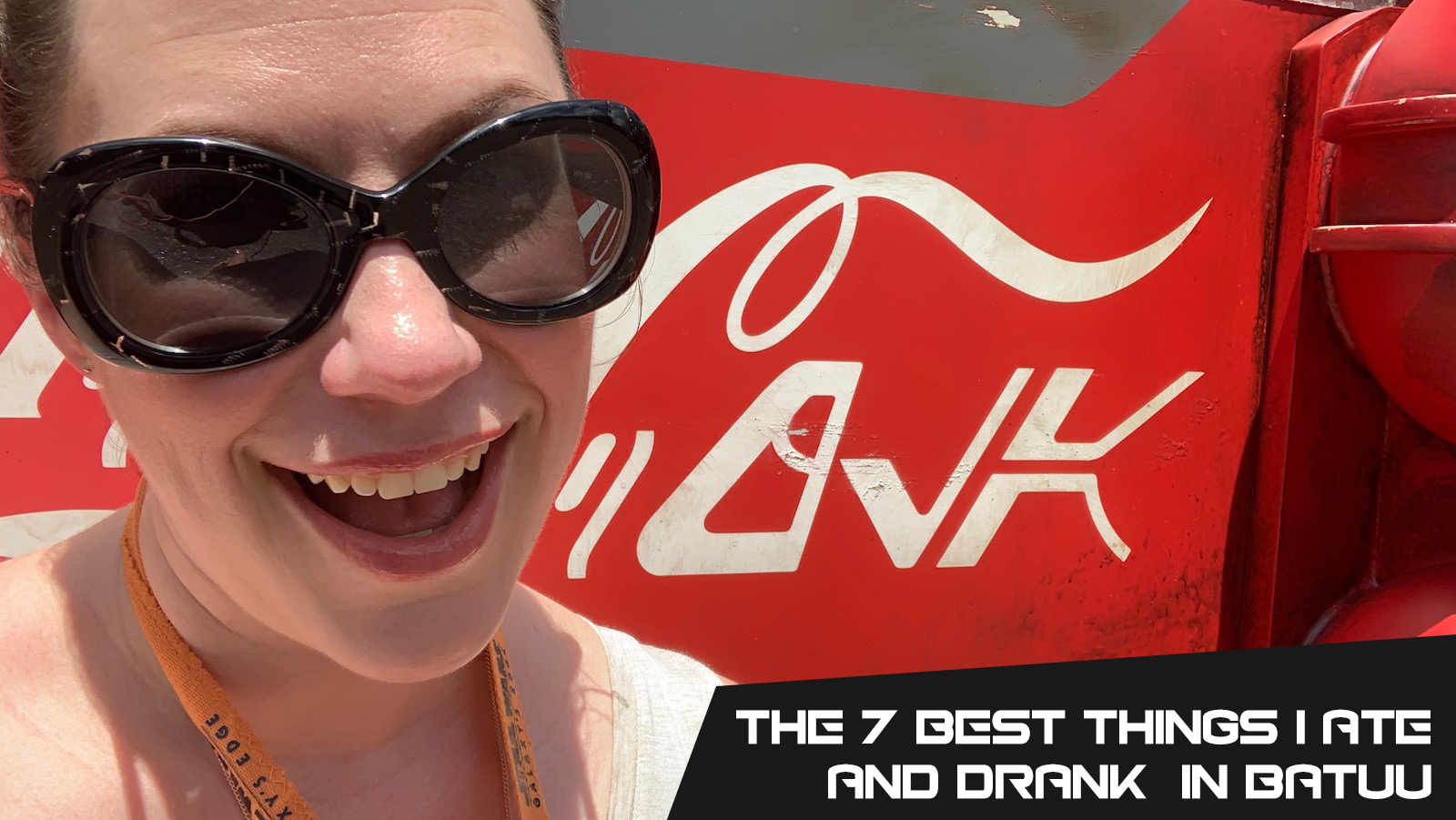 Bright Suns! I’m known as one of the more adventurous foodies on the WDW Magazine team, so I decided to take on the very serious responsibility of taste-testing my way through the menus of Batuu on my recent trip to Star Wars: Galaxy’s Edge at Disney’s Hollywood Studios.

While I didn’t try EVERYTHING on each menu (I’m only one person, and I only had two days*), I did manage to hit every dining location and sampled more than my fair share of their headlining dishes. So, what were the 7 best things I ate (And drank) on Batuu? Read on, travelers… 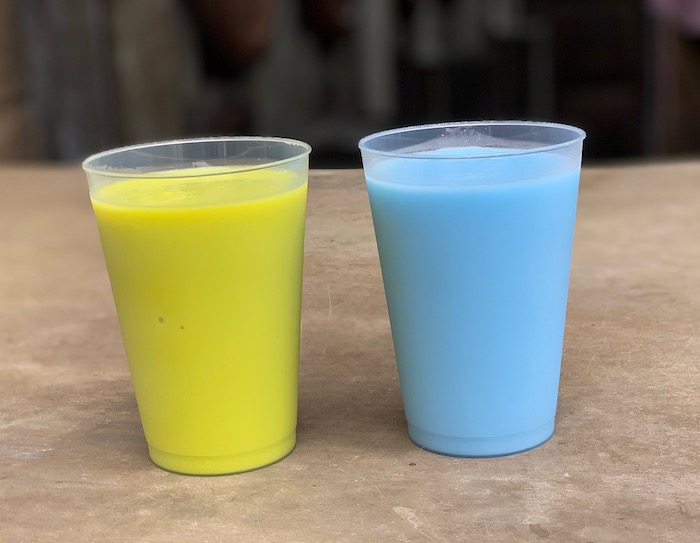 Mild Stand, $7.99 for Green or Blue Milk (available as a DDP Snack Credit)

When you go to Batuu, you simply HAVE to try the Green thala-siren and Blue bantha milk available at the Milk Stand. These are a love-it-or-hate-it product. Frozen rice and coconut milks are blended together and flavored with dragon fruit, pineapple, lime, and watermelon (Blue) or mandarin orange, passion fruit, grapefruit, and orange blossom (green). I liked the green a lot, the blue, not so much.

Note: for $14 you can get the Blue and Green milk as coolers, with rum and tequila, respectively. 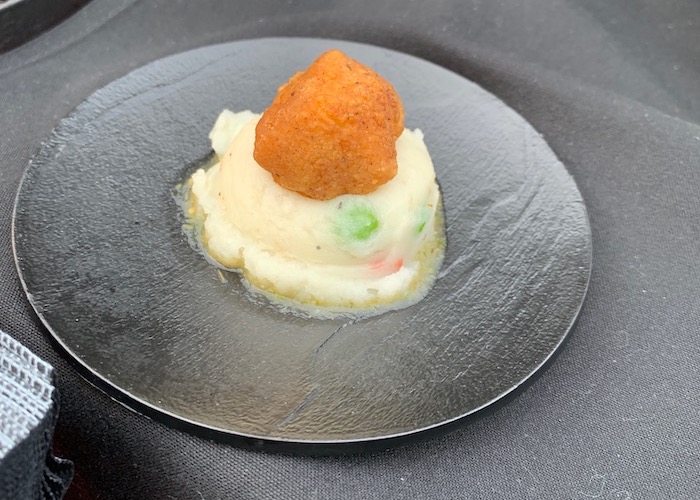 This was an item that I had a tiny few-bit size portion of at a media party. Because of that, my photo above isn’t the actual plating (but pretty close, just in miniature!), I didn’t get a lot of bites in order to form my opinion, and it was served from a warming tray outside in the humid air, as opposed to fresh off the line in an air-conditioned mess hall. But, it was still a winner for me!

The chicken was real meat and in a light breading strongly flavored with black pepper, the mashed potatoes were creamy with pops of veggies throughout which was nice (and looked great!), and the herb gravy was… interesting. Further research is needed to figure out if I really liked it or not.  I’m not the biggest mashed potatoes fan, but I am the queen of mac and cheese so I am looking forward to trying out the kids’ version of this, featuring chicken, mac and cheese, and a seasonal vegetable. 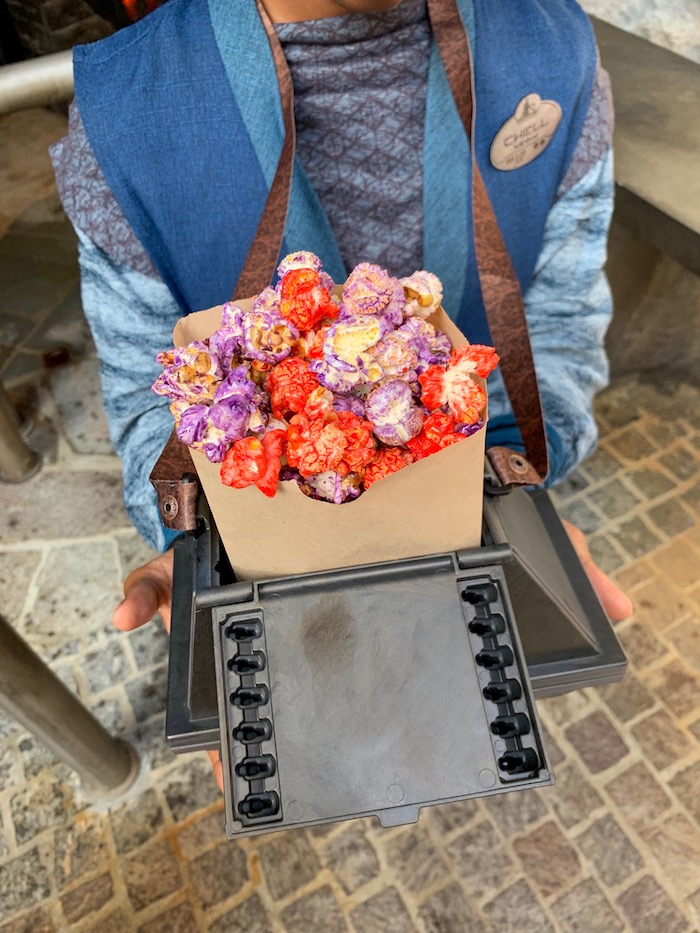 As the only true “snack” in Batuu, there is a lot riding on this candied popcorn mix. I’ll admit, it looks awesome, but I was sure the sweet-spicy flavor combo would fall short of my galactic expectations. I’m a big enough person to admit when I’m wrong, and I was. This stuff is addictive!

The blue/purple kernels are sweet – blueberry lemon pound cake flavor. Tasting it on its own, it might just seem fruity, but once you know that’s the flavor profile, it’s easy to pick out those sweet, buttery, tangy notes. The red kernel is (slightly) spicy – sweet chili-lime flavor. But since it’s candied, the “sweet” really comes through with just a hint of the chili. I’m convinced that the lemon and lime in each color are the key to tying the whole mix together. I loved it, and actually got a second bag!

I do wish they sold the flavors separately for picky eaters, and I’d caution ordering this on super hot, humid days when the candied popcorn just kind of melts together, like the second half of my first bag did. 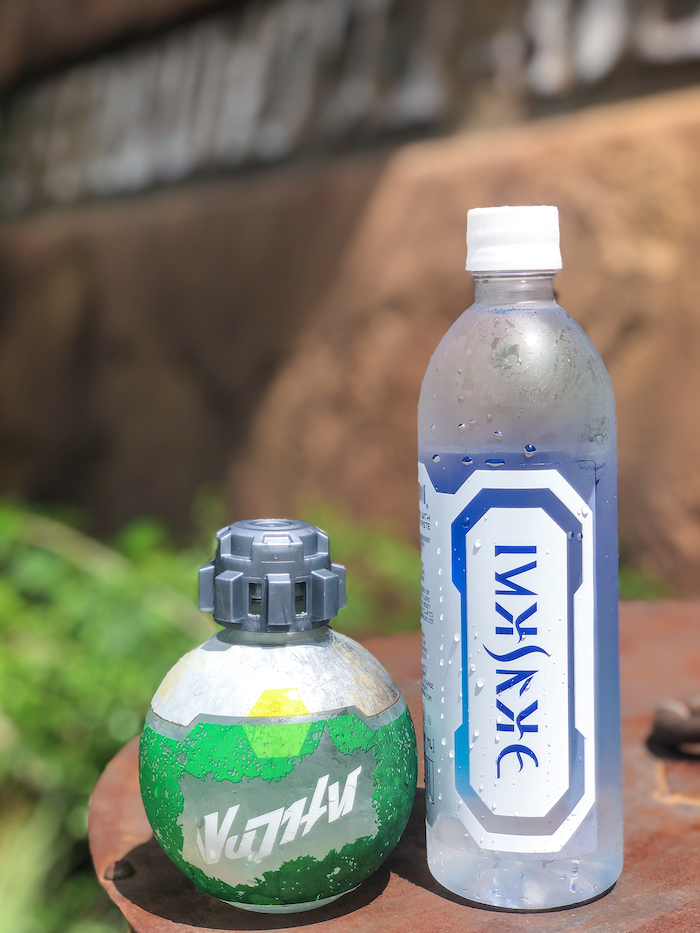 The Orb sodas come in Sprite, Diet Coke, and classic Coca-Cola and the water is Dasani. These little beauties didn’t make the list because of their standard contents, but rather, their unique presentation. On Batuu, you won’t find labels for Earth brands like Coke – even fountain beverage fountains have had their traditional labels replaced with special Aurebesh (Star Wars written language) labels.

But these bottled beverages are on the list because they are quintessential to the Batuu experience! Taking selfies with your orb, collecting all the varieties, and carrying around a prop that makes you feel more a part of the land is a really fun way to cool off and stay hydrated (or sugared up). They’re so popular you can only purchase 3 per order.

Pro tip: buy one of the water bottles, and refill it at the bottle refill stations throughout your stay on Batuu to be thrifty! 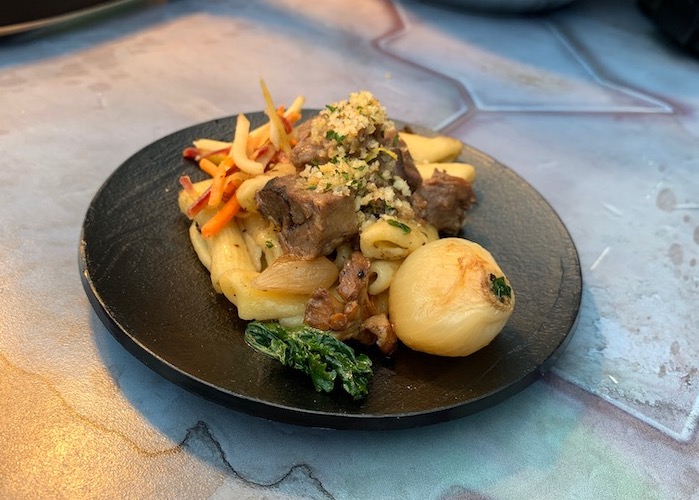 This is another item which I sampled at a media preview and only got a small portion of. I don’t think I’d want a big bowl of this hearty dish in the summer, but in the cooler months, it’s downright cozy. The tender pot roast is likely the big selling point of this dish for most, but for me, the accompanying sides were the standout: Cavatelli pasta tossed with wilted kale, some carrot slaw, braised onions, and a crunchy herb gremolata (breadcrumb) topper.

I want to sample the full portion of the dish as it’s meant to be, but I could really see this becoming my go-to meal in Black Spire Outpost. 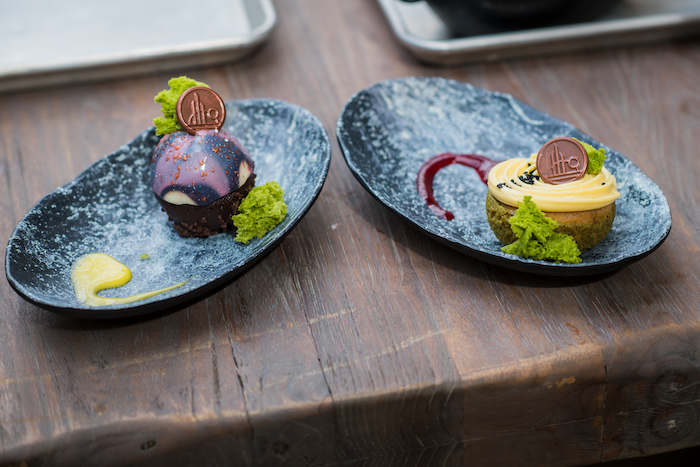 I like desserts as much as the next person, but in general, I’m a savory fan, not a sweet tooth. But both of these desserts blew me away! In fact, these two items were the BEST thing I ate on Batuu.

The Batuu Bon was a layer of dense, moist chocolate cake, topped with a dome of white chocolate mousse filled with coffee custard. It was ooey, gooey, and craveable. The presentation was outstanding with some gold glitter dust, a Black Spire Outpost chocolate medallion, a little white chocolate sauce, and little bits of green sponge cake. Of the two, this one was my top pick, and I’m not a chocolate lover!

The Oi Oi Puff was a fluffy creme puff filled with a creamy raspberry filling and topped with a passionfruit mousse (in my opinion, it was a bit stiff to be called a mouse, but it was tasty, so who cares?). Again, a medallion and sponge cake added to the plating, along with raspberry coulis. Delish! 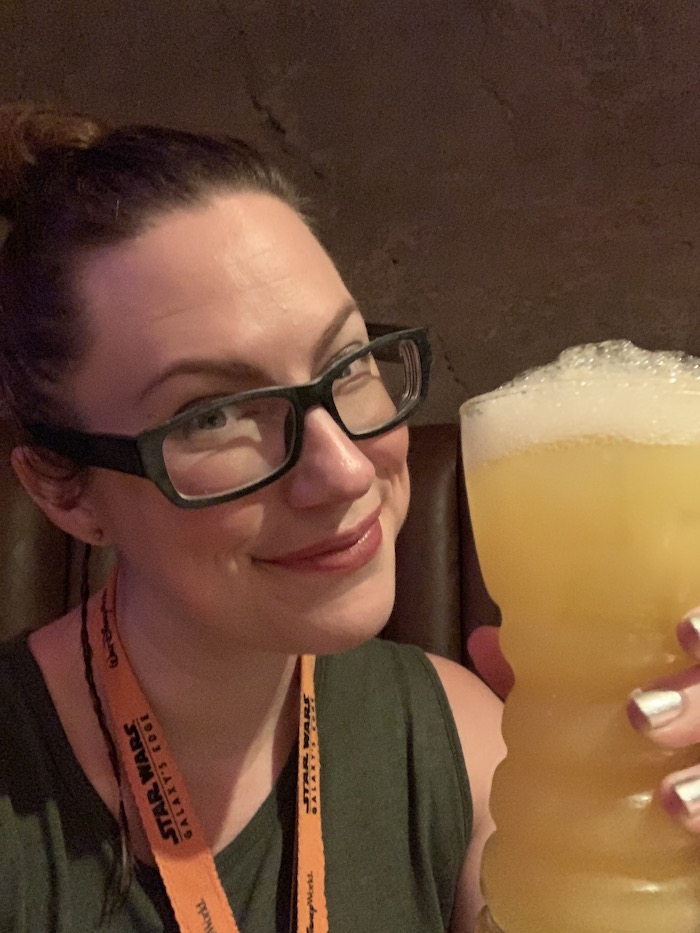 A happy customer with her Fuzzy Tauntaun. Photo by Stephanie Shuster

No visit to Batuu is complete without a stop to see DJ R3X spinning tunes at Oga’s Cantina! On my visit, I indulged in a Fuzzy Tauntaun – a super peachy (yum!) cocktail that was not overly sweet, and was topped with buzz button tingling foam. Fun and delicious! I’m looking forward to trying a few other of their concoctions, with and without alcohol.

On this trip, I didn’t get to sample the Rising Moons Overnight Oats (and their counterpart, Tuggs Overnight Oats), Dagobah Slug Slinger, Black Spire Brew, Ronto Morning Wrap, Nuna Turkey Jerky, or any of the non-alcoholic specialty juices and iced teas at Docking Bay 7 and Ronto Roasters. Good thing my next excursion to Batuu is only 6 weeks away!

Stay tuned for our November 2019 issue, for more on the meals, snacks, and beverages of Batuu!

Thank you so much to Disney for inviting us to the Star Wars: Galaxy’s Edge Media Preview!

*I was invited to attend a 2-day media preview for Star Wars: Galaxy’s Edge. All of the food I ate on Batuu, including the items listed in this article was provided to me free of charge (except the Fuzzy Tauntaun, which I paid for). However, the opinions expressed in my review are honest and my own.