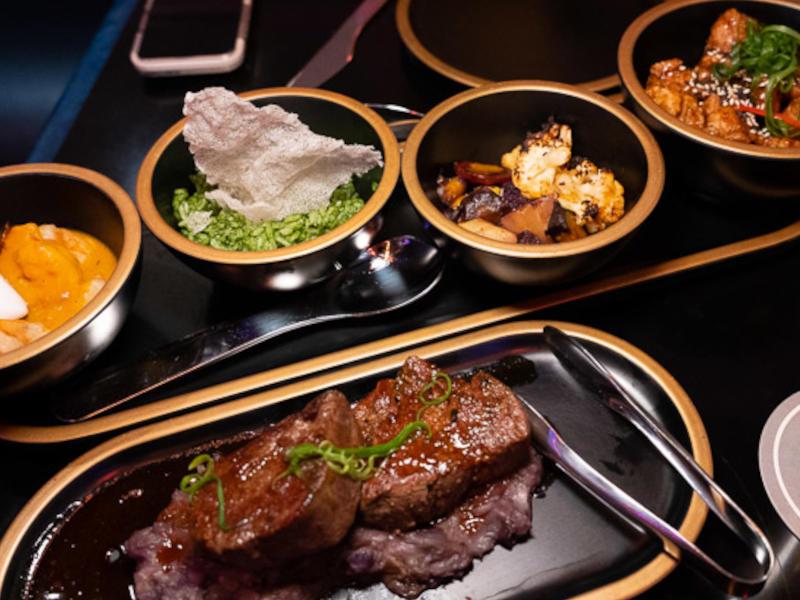 Galactic Starcruiser Dinner includes delicious Tip Yip, sweet mousse, and even the chance to save a Wookie.

By dinner time on night one of your Galactic Starcruiser voyage, you will already be deeply immersed in the action aboard the Halcyon. You’ve had a chance to explore the ship, start interacting with different characters, and begun to receive missions and communications on your datapad.

Your peaceful space cruise has already taken an unsettling turn as the ship is now playing host to Lt. Croy and a collection of First Order troopers.

Galactic Starcruiser Dinner and a Show 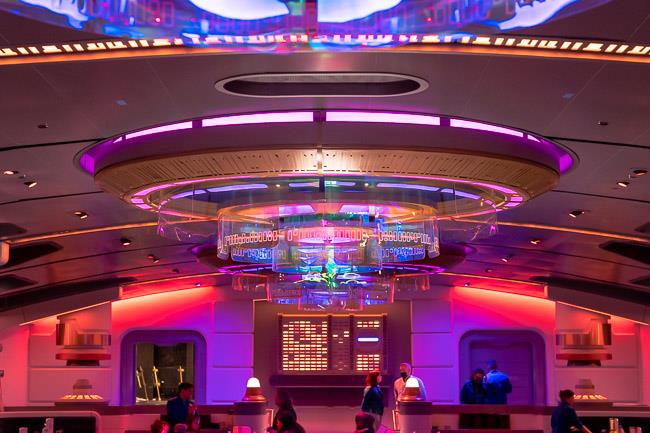 The story aboard Starcruiser never stops. Dinner is so much more than just your evening meal; it is an important junction in the story and will continue to shape your personal adventure aboard the ship.

As you make your way into the Crown of Corellia dining room you’ll notice that the setup has changed slightly from the serve-yourself buffet format found at breakfast and lunch. Guests are assigned to an early or late seating and will have a designated table and service staff. This will feel very familiar to you if you’ve ever dined aboard a traditional cruise ship.

Your Dance Moves Could Help a Wookie 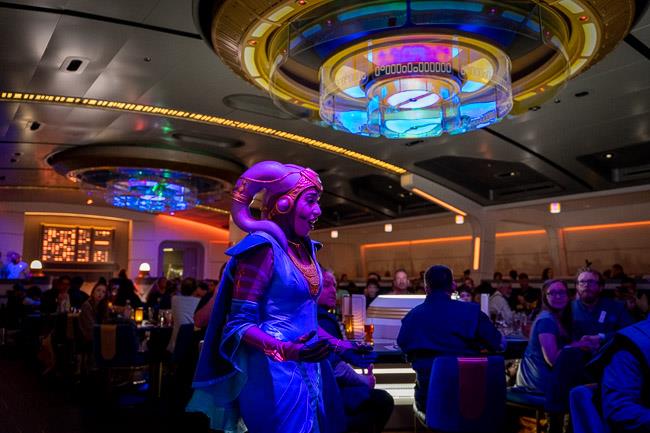 Dinner on night one is billed as an evening with Gaya, the Twi’lek superstar musician aboard the Halcyon providing onboard entertainment. Gaya is much more than just the evening’s entertainment though.

She’s a pivotal character in the unfolding story aboard the Halcyon and may even feature in your story missions depending on what course your personal adventure takes.

I can’t say enough about how thrilling Gaya’s performance is. There’s a reason she is the Rockstar Queen. Her songs run the gamut from upbeat rock anthems, soulful ballads, and certified dance floor hits. 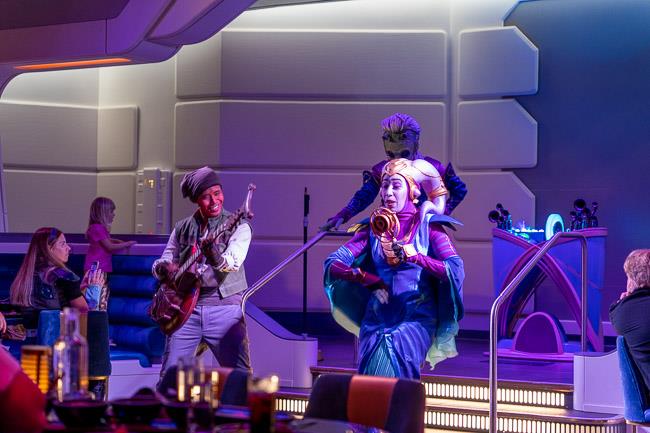 Why Disney isn’t selling a Gaya CD in the Chandrila Collection shop or streaming these songs online is beyond me, but this performance (and Gaya’s larger role in the story) were some of my personal highlights from our voyage.

The story never stops on Starcruiser, even during your dinner there are events happening in real-time that affect the unfolding plot. If you look around the room you’ll see Raithe Kole (Gaya’s Manager) conducting secret meetings and having hushed conversations.

You’ll see Sandro Alimander (a fellow passenger and Gaya superfan) mustering up the courage to make his move and capture a once-in-a-lifetime chance. 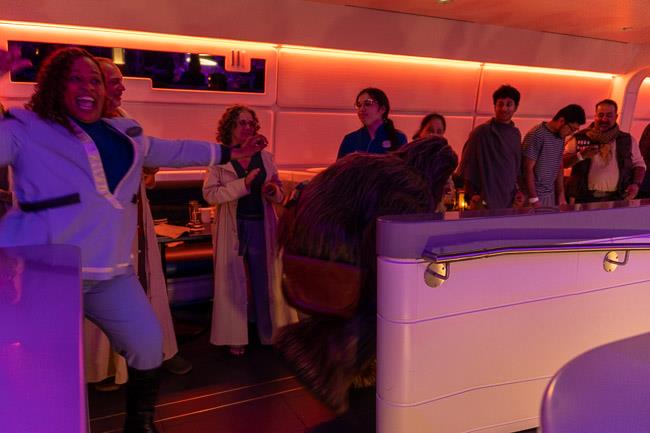 Your dance moves could help a Wookie! Photo by Danny Shuster

If you’re really observant you’ll see that Gaya and the Halcyon crew have encouraged everyone in the dining room to get to their feet and dance as a clever distraction so that Lt. Croy and his stormtroopers don’t notice a certain Wookie sneaking through the dining room. 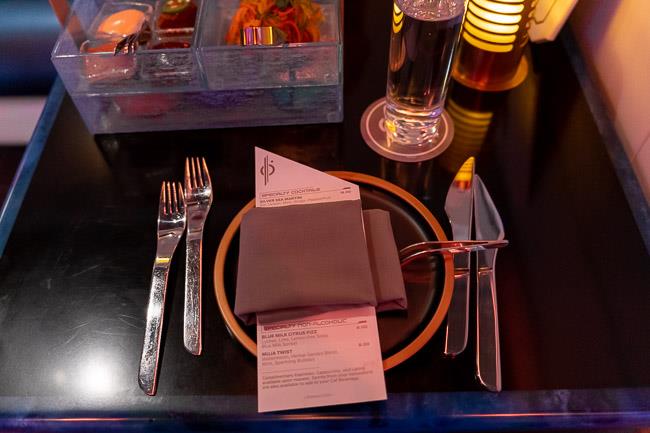 Your meal arrives family style and the portions will be adjusted to match the size of your dining party. As always, if there’s something you enjoyed or you’re in the mood for seconds, just ask your server and they’ll be happy to bring you more of anything on the menu.

🍸 For an additional fee you can order a signature cocktail from the menu at the Sublight Lounge to enjoy with your meal or for no additional charge you can enjoy the usual assortment of coffee, tea, juice and fountain drinks plus blue and green milk during dinner.

👶 There is a separate “younglings” menu if you have a really picky eater. You’ll find standard kids fare like chicken tenders, plain cheese pizza, pasta, and veggies. I’d give the regular dinner menu a try first though, the fun presentation and approachable flavors plus the alien nature of the Star Wars theming might be just the trick to get your picky eater to try something new. 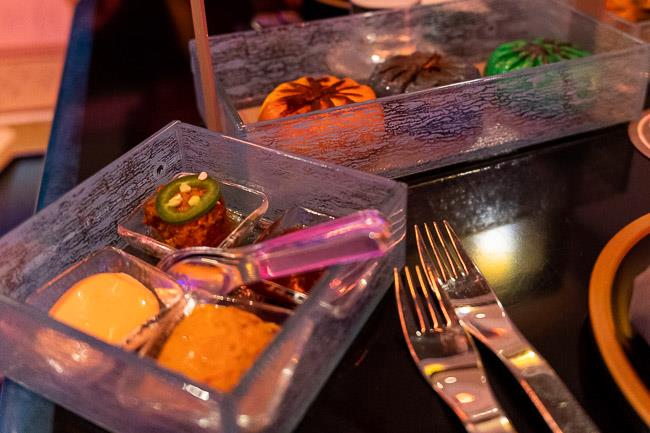 I adore the bento-style presentation of the appetizers. We had the chance to speak with Brian Piasecki (Culinary Director, Disney Parks), who noted that everything from the cutlery to the plates was planned and considered along with the food itself to bring a narrative element to the dining experiences aboard the Halcyon.

Your bento arrives in two layers, the three spiral dumplings on the bottom with the veggie “noodle” salad and interplanetary dipping sauces balanced above. It really is an experience to watch this tower arrive and get unpacked at your table. 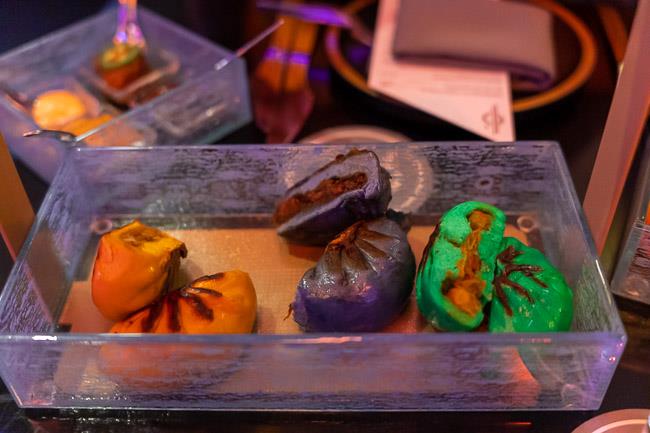 The multicolored dumplings are steamed first and then pan-seared which gives a great mix of fluffy bun plus crispy edges. 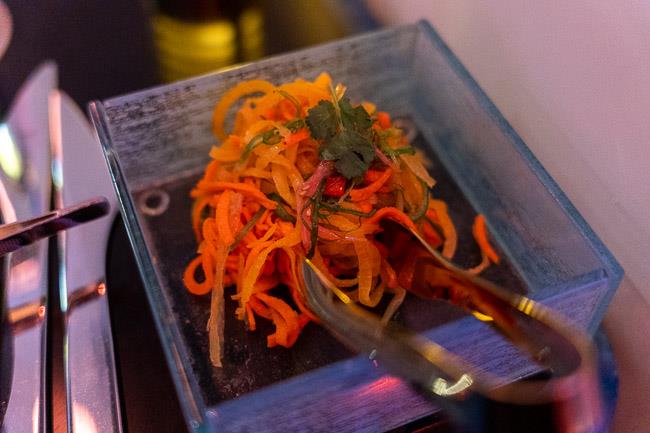 The noodle salad does not actually have any noodles, instead it’s a mixture of spiralized vegetables (yellow beet, daikon, onion, and carrot) tossed in a white miso vinaigrette. This salad is served cold and the vegetables tasted fresh and crunchy. 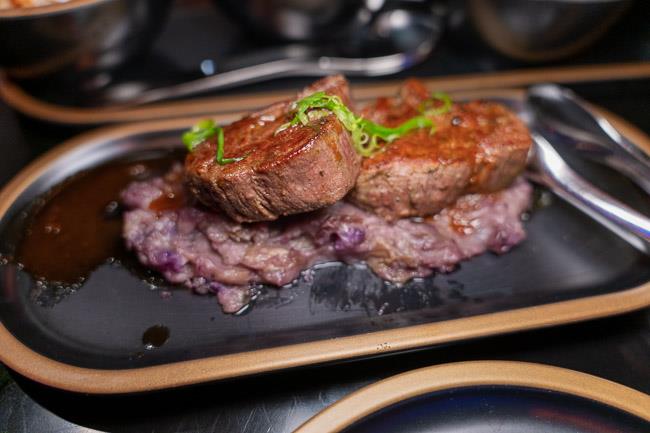 The Chandrila Chef’s Selections has more than enough variety to satisfy everyone’s taste. The Bantha Beef Tenderloin (Tamarind-glazed with crushed Moon-rock potatoes) is presented as the main entree with the other dishes serving as your sides. 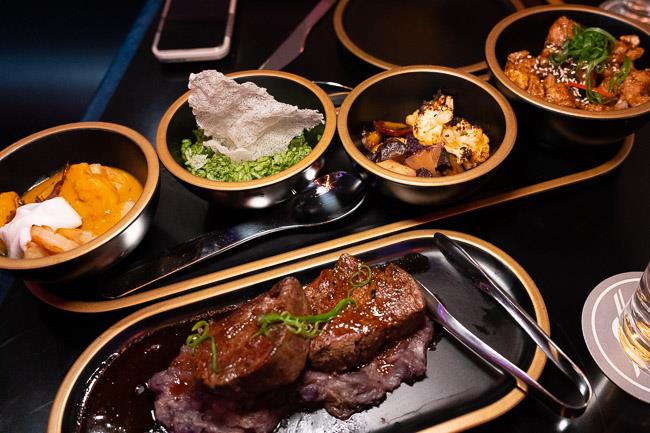 From left to right you have:

While the Bantha was good, I preferred the short rib served on night two, the side dishes were much more interesting to me. There was nothing wrong with the beef, it was well cooked and appropriately seasoned, it just felt a little plain.

Overall the food onboard the Halcyon is excellent and has a lot of bold and adventurous flavors. This dish just didn’t spark any excitement for me—it really is just meat and (purple) potatoes which is exactly what some guests want, but felt a little terrestrial to me.

A Trilogy of Side Dishes At Your Galactic Starcruiser Dinner 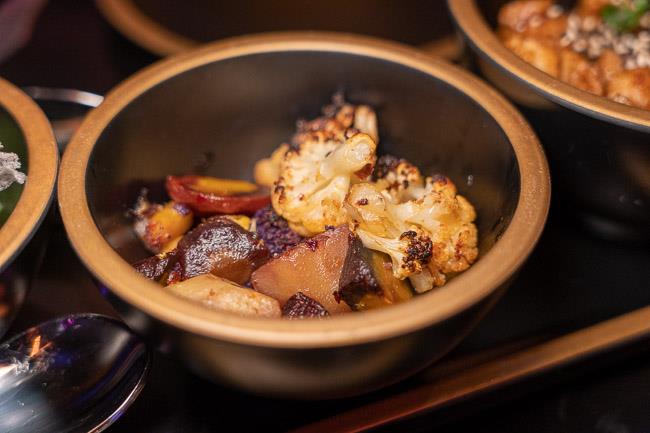 The rice and vegetables were both good, well seasoned, and nicely cooked. The harissa spice adds some complex flavor and just a touch of heat to the vegetables and the puffed rice crisp makes for a nice presentation. 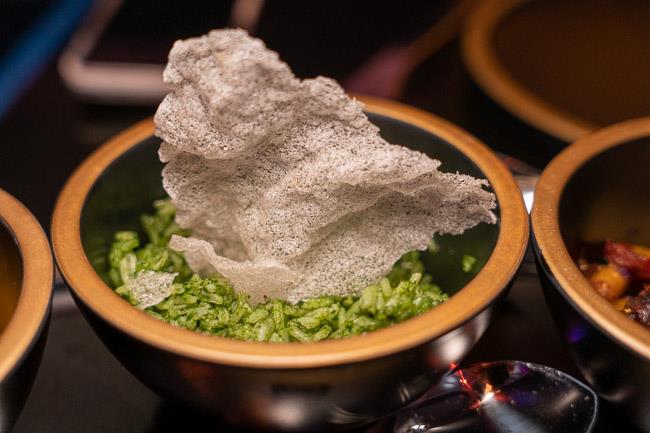 What stood out to me most were the big flavors of both the shrimp and the chicken. 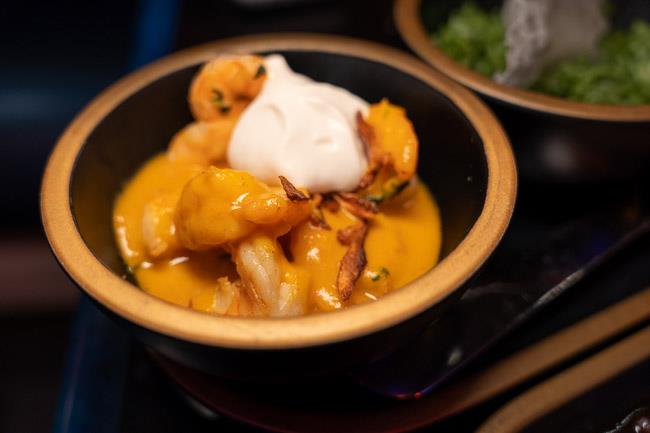 The stewed shrimp have a vibrant, and silky-smooth sauce. The lemon grass is a great aromatic flavor to pair with the seafood and the touch of sweetness from the coconut-lime foam is a great accent to the rich, umami flavor of the lobster cream. I found this dish to be layered and complex and very satisfying. 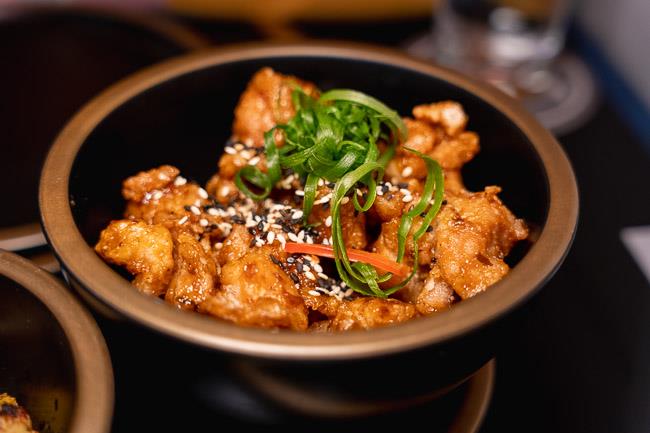 The Tip Yip was my favorite dish of night one. It’s a blend of familiar flavors, the crispy fried chicken, the sweet bourbon glaze, and a strong nutty, sesame taste. It is not the same as the Tip Yip found inside the spiral dumplings but both of them reminded me of good Chinese take-out. 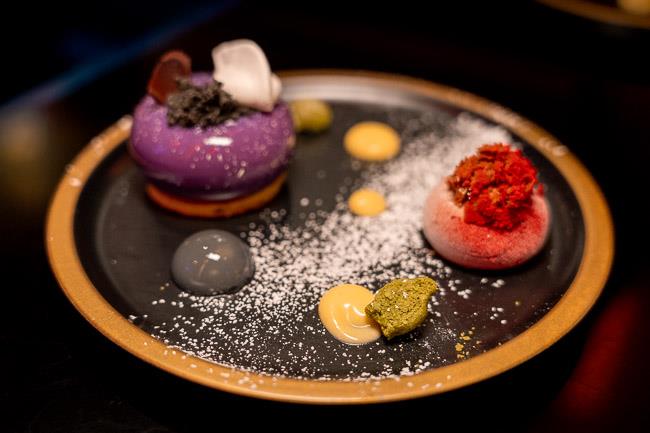 The night one dessert is a real looker. Make sure you take a moment and appreciate the beautiful plating. I think it looks like a galactic portrait; the powdered sugar is like a belt of stars, and the desserts and garnishes are like little planets and moons.

Those moons and planets are actually:

It’s clear to me that the culinary team had a great time bringing these creative visions to life and this plate is loaded with curb appeal.

Not Just a Cute Dessert

As for the flavors, they are also pretty strong. If you’ve read my lunch review you’ll know that mousses and whips seem to be the default when it comes to space-themed desserts. 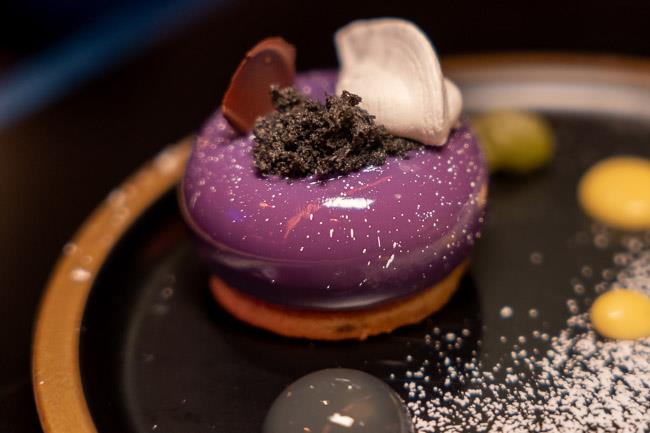 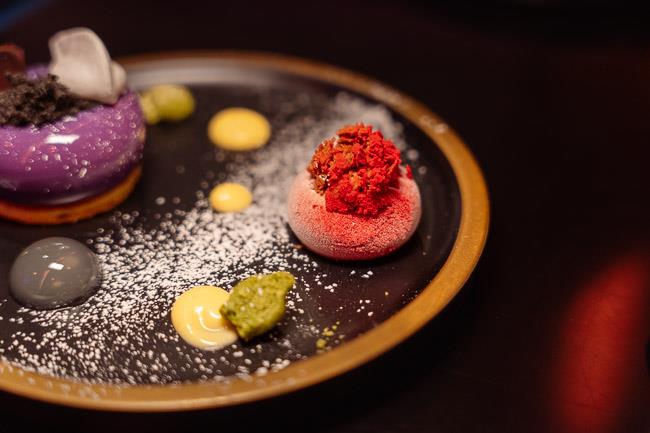 The caramel whip is much more my style, it’s salted caramel ice cream and delicious. I’m glad that even in space, some things don’t change.

The cardellia jelly is that semi-translucent blob on the plate and is a refreshing yuzu (a Japanese citrus) flavor, I only got a small taste as my dining partner ate hers and mine declaring it to be the highlight of the plate.

If all of that wasn’t enough, the meal finishes with one last sweet touch. A final plate with some luxurious chocolate truffles and a dusting of shimmering luster powder. 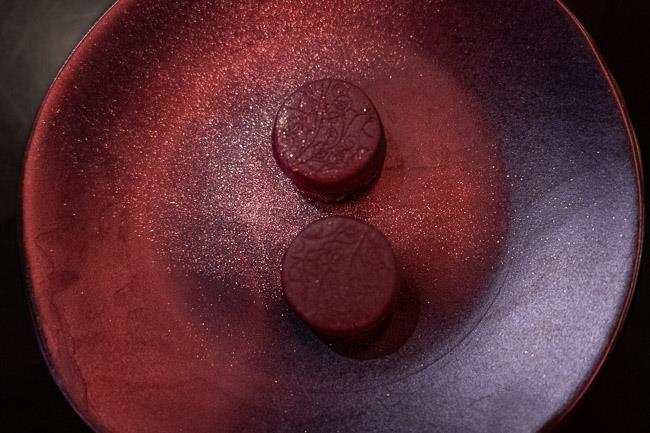 As is the case with so much of the Starcruiser experience, the photos just don’t do it justice. These chocolates twinkled like little stars under the lights of the dining room and made for a picture-perfect finale to our meal.