Free Things to Do at Disney World: How to Spend a Day Without Spending a Dime 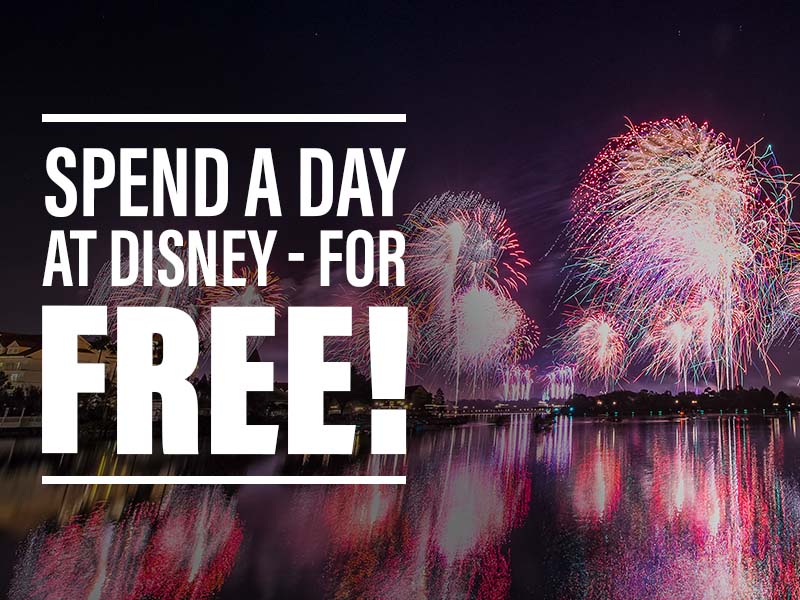 As prices soar and Genie+ adds some potential additional expenses, you might be wondering if there are any free things to do at Disney World. The answer? Surprisingly, quite a few!

Now, before you get to excited, settle down—this isn’t an article about how to sneak into Walt Disney World. If you don’t have an Annual Pass, you’ll still have to pay to visit one of the theme parks or go through weird contortions (make friends with a Cast Member or Club 33 member and get them to let you use one of their passes, use points from your credit card to pay for your ticket, etc.)

But—take it from a former Cast Member—it’s totally possible to enjoy the Walt Disney World Resort without spending a dime on property. Plus, it’s fun.

We’re not going to break any rules, but if you do Disney this way, it’ll feel like you’re getting away with something. No crime in that, right? 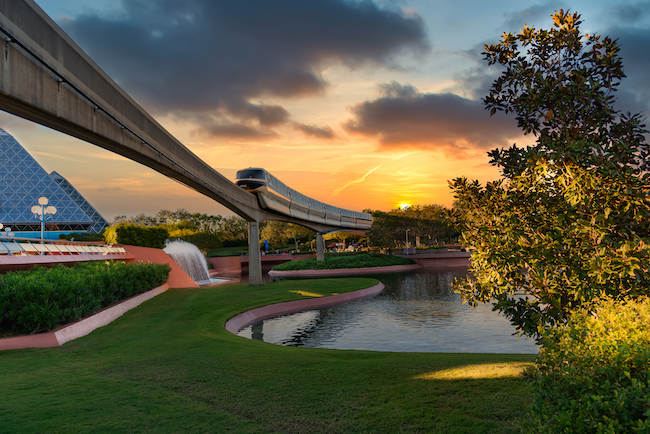 Riding the monorail is one of the most classic free things to do at Disney World. Photo by Mike Billick

The best things at Disney aren’t things, but experiences. In this article, I’ll take you through my ideal free day at Disney World, but contrary to popular thought, there are enough free things to do at Disney World that you can’t hit ‘em all in one day. Tap here to skip to the full list.

Here’s your free Disney day, from start to finish.

Please note: This post includes some affiliate links, but we only include links to products we wholeheartedly endorse. If you want to support WDW Magazine more directly, consider starting a digital subscription. It’s less than the cost of a Mickey Bar for monthly access to all our subscriber-exclusive content.

Prepare for a Free Day at Disney

There are plenty of free things to do at Disney World, but you’ve got to have a game plan so you don’t accidentally end up spending.

First, grab two coolers—one big and one backpack-style—and get packing.

The large cooler stays in your car (we use this Coleman plug-in cooler). Pack your meals, snacks, drinks (yes, you can pack a cocktail), and two Yeti-type tumblers packed with ice. (I know you can buy a one-day ticket with what two actual Yeti tumblers cost, but you can find similar ones that only cost, say, as much as a WonderWorks ticket).

For the smaller cooler, choose something you won’t mind hauling around all day, like an insulated backpack that also holds your phone, car keys, and whatever else you need. Make sure it meets Disney guidelines: no larger than 24” x 15”.

It’s Florida, so don’t forget your water bottle—and one or two gallon jugs to leave in the car.

Fun fact: My first annual pass cost $99, and parking cost something like $6. I can’t bear to pay for parking at Walt Disney World, so my top advice for anyone traveling to Walt Disney World is to park at Disney Springs for free. 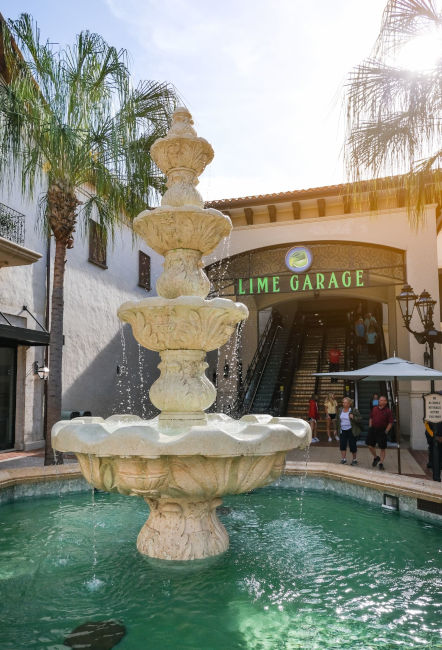 Parking in a garage at Disney Springs is totally free. Photo by Judd Helms

Park in the garage so your extra water doesn’t get hot.

Find a table or bench in one of the common areas. Don’t use the tables, for example, attached to a restaurant; yes, the seating outside Jock Lindsey’s Hangar Bar is comfy, but you probably shouldn’t unpack a picnic there.

Here, enjoy either a late breakfast or early lunch packed from home, then head over to the Coca-Cola Store to pose with the Coca-Cola polar bear (kids love this—but good luck dragging them by all the sugary merch!) 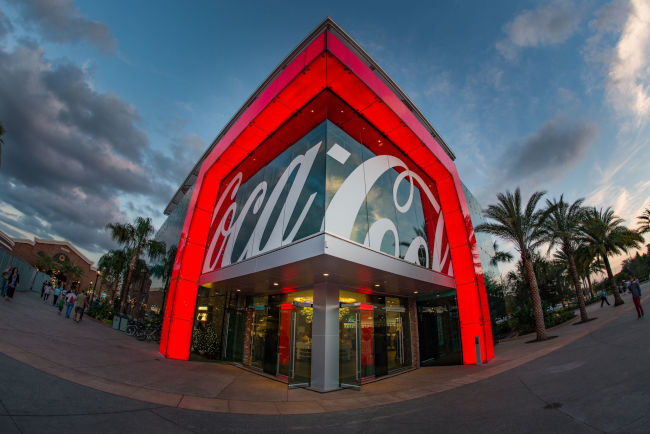 Snap some pics at the Coca-Cola Store. Photo by Cliff Wang

Fun Fact: If you are looking for a free thing to do inside a Disney World park, consider Club Cool at EPCOT. You can sample eight different Coca-Cola beverages from around the world without paying a cent.

You can also take a free fitness class at Disney Springs on Wellness Wednesdays and Fitness Fridays.

Tour the World in the Afternoon

With breakfast or lunch under your belt, pop back over to the car and pack a snack and refill your water bottle. Then, hop on a bus to the Transportation and Ticket Center (TTC). Here’s what you can do there. 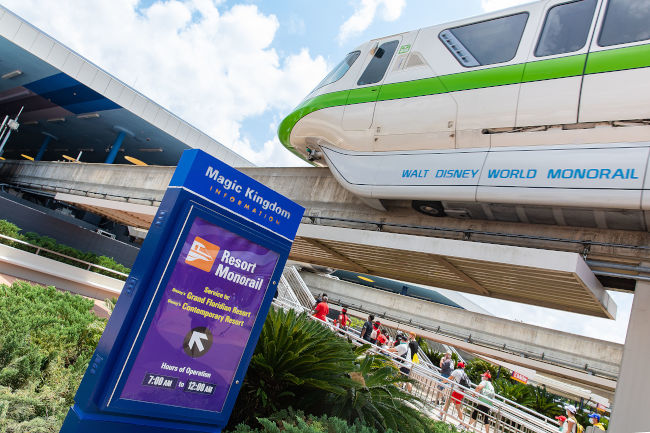 The TTC. Photo by Brett Svenson

Take the resort monorail and stop at the Polynesian. As a broke teenager, my friends and I would pool our gas money, climb into my friend Chad’s big ol’ Buick, and spend hours riding the monorail. Don’t knock it until you’ve tried it: Disney’s monorail, FriendShips, and other free conveyances are fun.

So is touring the hotels: Walking through the Polynesian is almost as good as walking through a theme park. Disney’s theming game is strong here. 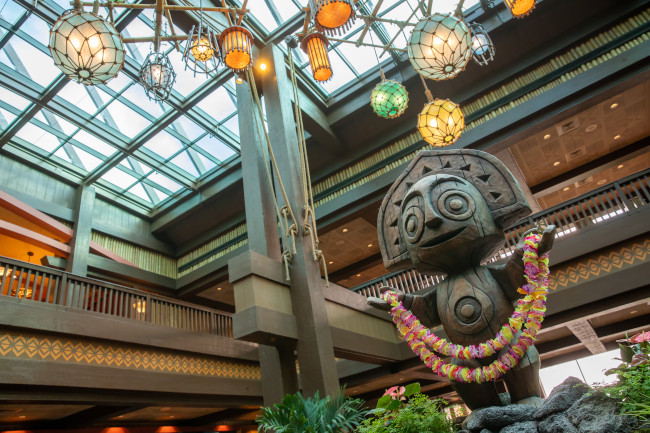 We could spend all day exploring the Poly. Photo by Brett Svenson

Walk along the beach and pretend you’re staying at one of the villas literally over the water, or simply sit in the lobby in a bamboo-bedazzled chair and relax.

Walk from the Poly to Disney’s Grand Floridian Resort & Spa. Wander through the grounds and immerse yourself in a Florida of yesteryear.

The Florida-themed maps and art on the walls near Cítricos make for a fun detour on your walk toward Magic Kingdom. But keep walking—after winding through the Grand Floridian, the pathway crosses two bridges on the Seven Seas Lagoon.

Pro Tip: As you cross the second one, look to your left and you’ll see the parade floats for the Electric Water Pageant lined up and waiting for nightfall.

At Magic Kingdom, you have a choice: Walk to Disney’s Contemporary Resort, hop on a ferry back to the TTC, or get on the monorail to the TTC (either directly or via the resort monorail).

At the TTC, get on a monorail and head over to EPCOT, where the monorail gives you a tour of former Future World before letting you off right by the main gate. I’ve also seen wildlife on the monorail trip, including white-tailed deer and hawks, so keep your eyes peeled on the monorail ride and you might catch a real-life relative of Iago or the Aristocats!

Once you’re at EPCOT, hop on a bus to Disney’s Yacht and Beach Club Resorts, and walk out to the beach for a snack and a drink. If you brought a cocktail, enjoy your pre-dinner drink and cheese and crackers by the water. 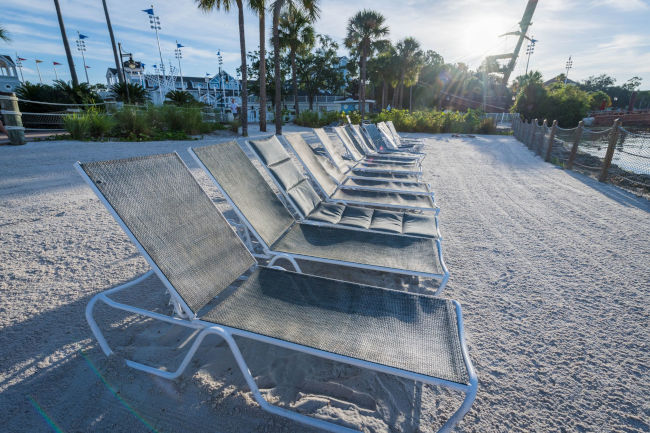 Relax on the beach if the weather is nice. Photo by Laurie Sapp

Unlike the resort hotel pools, anyone can use the beaches, so stretch out on a Disney beach and enjoy your afternoon wine and cheese (or Coke and cheese, or martini—the only limit is what you packed that morning!).

When you’re done, it’s only a few steps to Disney’s Skyliner. You do want an aerial tour of the Walt Disney World Resort, don’t you? Tour the property from the air; the Skyliner takes you to Disney’s Riviera Resort, Caribbean Beach Resort (also a great place for some beachy R&R), Pop Century, and Art of Animation Resort.

Get off the Skyliner at the Art of Animation and walk through a larger-than-life setting from The Lion King. Here, you can also take advantage of free animation classes throughout the day. 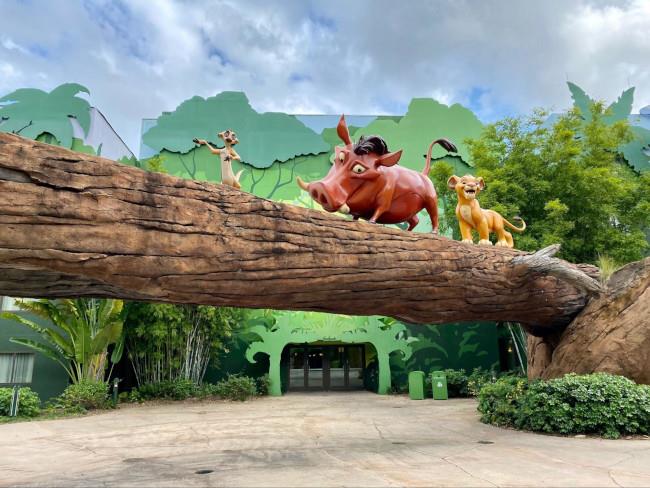 Encounter your favorite animated characters at Art of Animation. Photo by David Lee

Fun Fact: There are also free animation classes inside Animal Kingdom. Don’t miss the Animation Experience at Conservation Station during your next visit. Read all about it in our March 2022 Art & Animation issue when you become a digital subscriber.

Wherever you end up, leave time to get back to your car at Disney Springs and get your dinner and dessert out of your car. The evening awaits, and choices abound!

Want more tips on how to save at Disney World? Subscribe to WDW Magazine by the end of this month to make our April 2022 Save or Splurge issue your very first. Half of the issue is dedicated to all the free and affordable things at Disney, but then we’ll dive into the most luxurious things Disney has to offer. It’s a can’t-miss issue!

Relax in the Evening the Way You Want

Want to listen to live music? The stage across from the World of Disney at Disney Springs offers live music every evening around 6 PM (check the schedule to confirm, of course).

If you’d rather view Harmonious, a bench on the BoardWalk is a great spot. Plus, you can go dancing for free at Atlantic Dance Hall after. 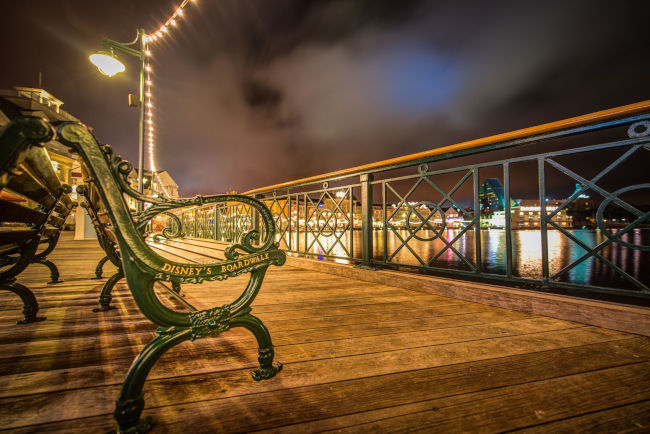 Grab a bench to watch Harmonious from the BoardWalk. Photo by Cliff Wang

Dying to see the Electrical Water Pageant? Head over to Fort Wilderness and grab a spot by the water.

Want to watch a Disney classic? Literally every Walt Disney World Resort has nighttime showings called Movies Under the Stars. Take a look at the recreation calendar and pick your flick (bonus points if you popped popcorn at home and thought to pack it!)

By the time the evening’s fun ends, you’ll be more than ready to pack it up and call it day. But remember: This day was only one slice of the Walt Disney World layer cake; you can come back as often as you want for free and spend the days playing tourist at the different resort hotels, or riding different boats between resorts, or finding a new place to have an impromptu picnic at sunset.

Free Things to Do at Disney World: Extensive List

Above, I’ve taken you through an ideal day at Disney where you spend absolutely nothing. But there’s so much free stuff to do at Disney that you can’t possibly do it all in a day. Here’s an extensive list of free things to do at Disney World:

Disney Skyliner Map: How to Get to EPCOT, Hollywood Studios, & Skyliner Resorts