Finding Nemo: The Big Blue… And Beyond! Now Open at Disney’s Animal Kingdom 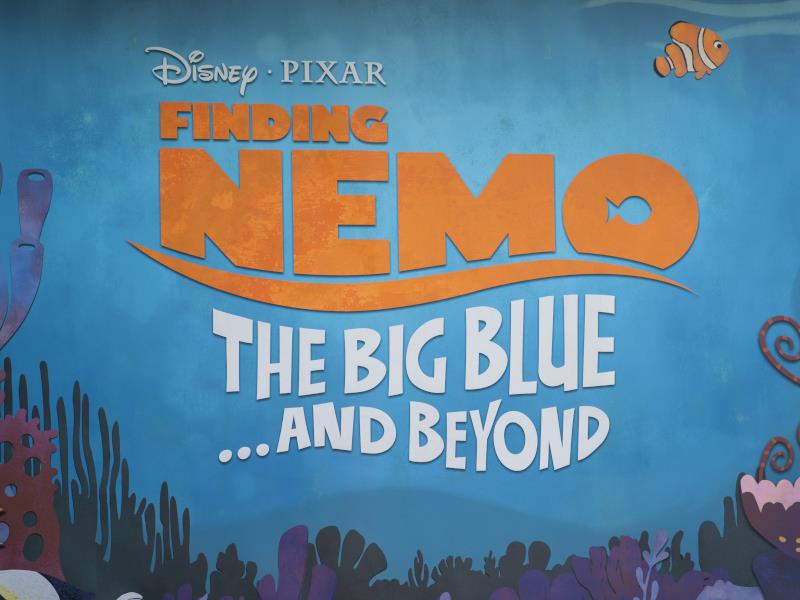 Finding Nemo The Big Blue… and Beyond! is now officially open at Disney’s Animal Kingdom, with a new, reimagined storytelling of the classic Finding Nemo storyline.

Disney Parks invited WDW Magazine to the soft opening of the show ahead of its grand reopening on June 13. Read on to learn about what has changed, what’s the same, and some hidden surprises!

The New Storytellers of Finding Nemo: The Big Blue… And Beyond!

The show now opens with brand-new narrators that take us on a look-back-style journey about the tale of Finding Nemo. We recognize the new narrators as Gill (moorish idol), the lead storyteller, who is joined by Peach (starfish), Bloat (pufferfish), and Deb (black and white damselfish). These are the fish in the tank in the dentist’s office in Finding Nemo.

The story of Nemo, and Marlin’s journey to rescue Nemo, is still the same but the storyteller and perspective have changed. 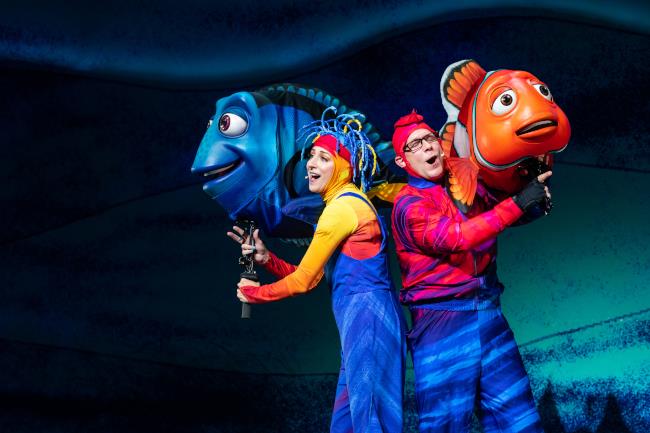 We start out in the opening scene with an immediate look at the new LED screen, its mesmerizing color and animation adding vigor and brightness to the underwater set.

This is, by far, the best addition to the show (more on that later). The show opens with a scene in the Marine Life Institute, with messages about ocean life conservation and reduction of plastic wastes.

Then, there is an abrupt switch as the narrators retell the story of Nemo. 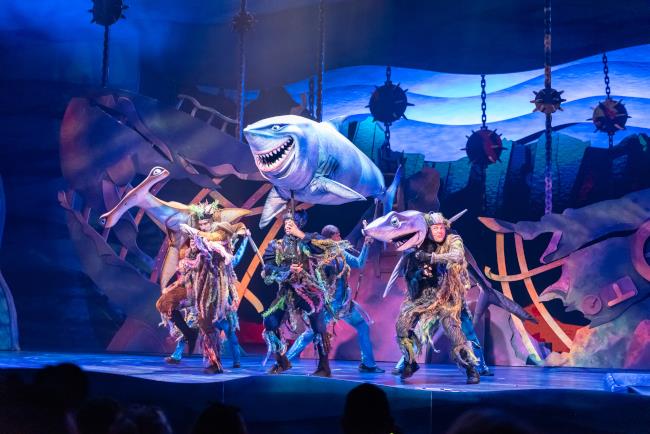 The overall story is the same, just narrated. The costuming is the same. What is different is the length of the show. The show’s runtime has been reduced from 40 minutes to about 25 minutes, cutting out superfluous dialogue and featuring shortened versions of a few of the songs.

Overall, this is a positive change and a much more tolerable show length for younger guests. 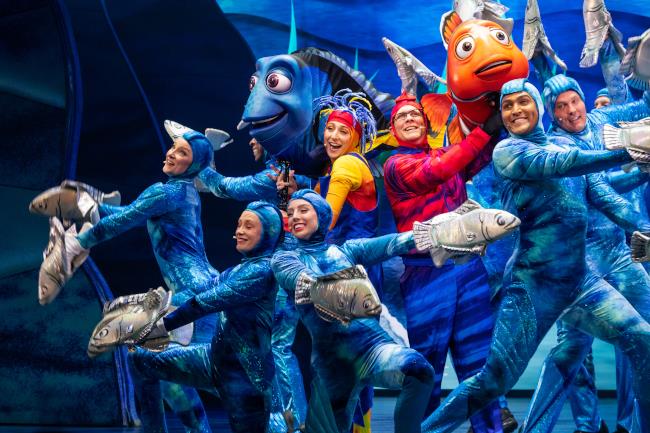 As mentioned above, the songs from the original Finding Nemo: The Musical are all still in the new Big Blue and Beyond version, though some songs are shorter in length.

The abbreviated songs did not detract from the show itself, and I still found myself singing “In the Big Blue World” as I exited the theater.

The new LED screen does enhance the show visually, but it also harbors a few hidden details that we learned from one of the animators that designed the background scenes: A Hidden Mickey!

To Spot the Hidden Mickey: Pay extra attention in the Big Blue Scene to try and spot a tan/greenish piece of brain coral.

Also, during cast bows at the end of the show, you may be able to spot an animated hermit crab that walks out centerstage (but still on the screen). If you look carefully, you can see that the hermit crab bows along with the cast!

These details are the things that make a Disney production extra special, are they not?

How To Watch Finding Nemo: The Big Blue… And Beyond! 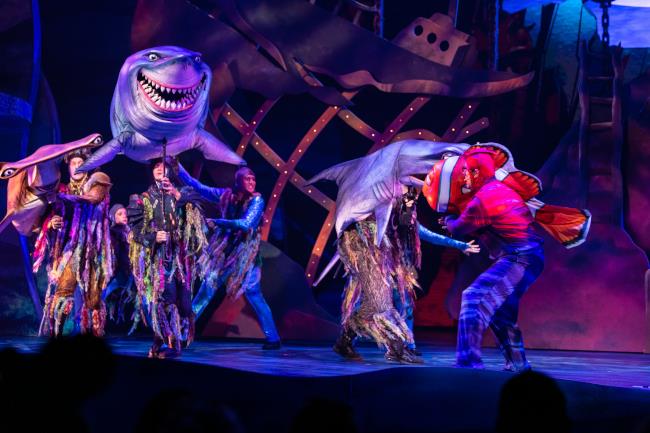 Here are some details that will make your viewing of Finding Nemo… Big Blue and Beyond! more enjoyable:

If you want to have first dibs on seating choice, book that Lightning Lane experience and sit all the way up in the front, and close to the stage. The characters do walk down that thin aisle in front. They are not in the house aisles anymore, save for a quick run-through by Nemo and Dory, so if you want to get up close, this is the best spot to view the show. 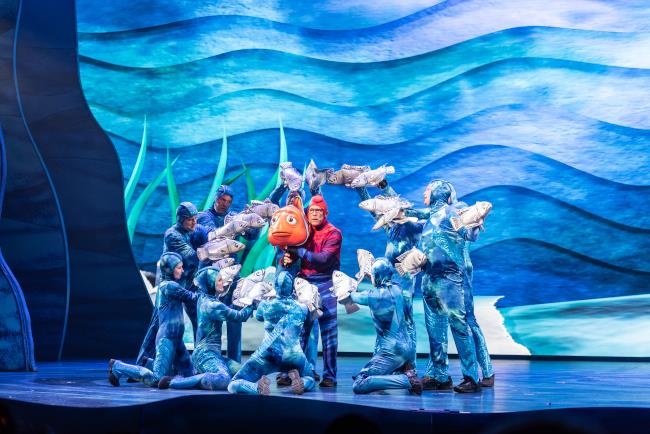 And not just for the seats! The show is every hour, on the half-hour (that can change so be sure to check your My Disney Experience App for up-to-date times), but if you get there early you can hear the Marine Life Institute ocean facts that play every few minutes (and enjoy the air conditioning while doing so).

There were also some fun facts included about turtles, sharks, and other sea creatures that were very interesting!

The show times for Finding Nemo: The Big Blue… And Beyond! are:

But some days there are later show times. Notice there is no 1:30 PM show.

Go see it, especially if the show wasn’t your favorite before. It’s much more concise after the changes, and keeping the best part of the show (the songs) while making it all shorter makes it a much more enjoyable experience!

Go support them, because we get to have Broadway-caliber talent in Disney Parks—and it’s all included in the price of your admission!

What our Reporters Thought of the Show:

Sara Dennis: “I loved it. I loved hearing all of our favorite music again. All of our favorite songs – they didn’t cut anything, which I was a little worried about, so that was amazing. I think the shorter length is going to be really good for families here at Animal Kingdom.”

Maria Salerno: “I liked that they retained all of the songs, it felt like a ‘greatest hits’ version to me. All of the music, with none of the filler. The ancillary scenes that didn’t contribute to the main plot were removed and I think that made the whole show flow better and move nicely.” 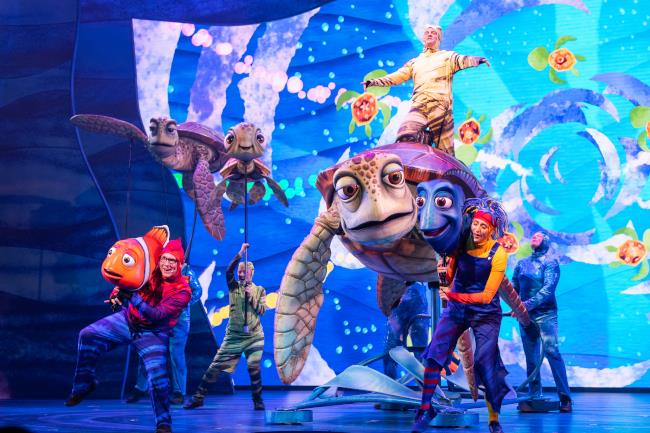 We are so incredibly happy that this guest favorite has returned to the parks, and if you just cannot wait to see the show, you can hype yourself up by listening to the soundtrack on Spotify.

This show is an absolute must-do on your day at Disney’s Animal Kingdom!

Ilana Robinson is a published writer, photographer, seamstress, and former attorney, who practiced law in the Greater NYC area for 10 years before relocating to Orlando with her family. She is a WDW Annual Passholder and dreams of visiting every single Disney Park worldwide. Follow along on her Disney adventures on Instagram and TikTok.

Ilana Robinson is a published writer, photographer, seamstress, and former attorney, who practiced law in the Greater NYC area for 10 years before relocating to Orlando with her family. She is a WDW Annual Passholder and dreams of visiting every single Disney Park worldwide. Follow along on her Disney adventures on Instagram and TikTok.