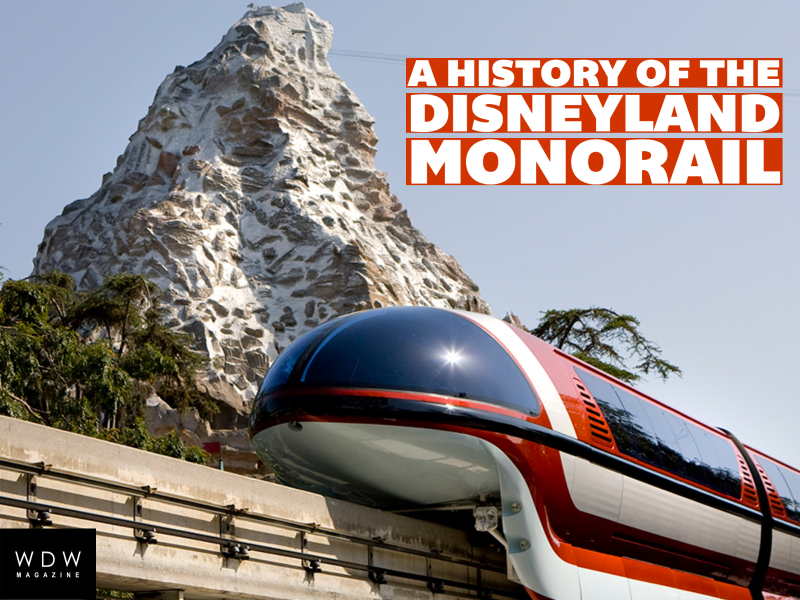 Learn the fascinating history of the Disneyland Monorail, a revolutionary transportation system even today. 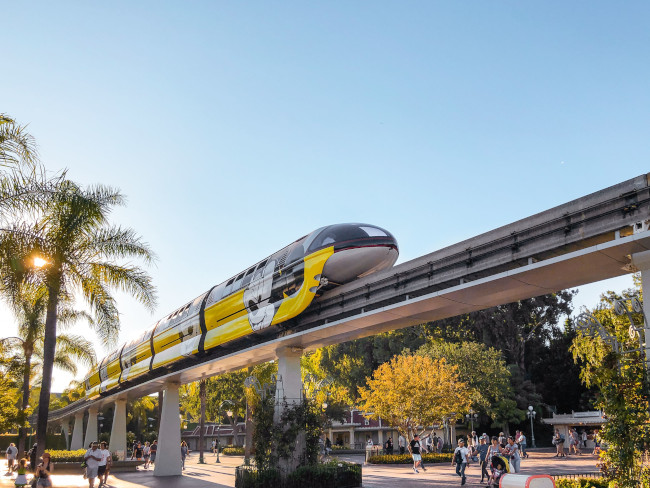 Don’t have time for the full history of the Disneyland Monorail? We’ve got you covered with some fast facts about the highway in the sky:

Love Disney history? Order our 2022 Disney World wall calendar, 16 months of beautiful photography and Disney Legend history. We’ve sold out the last two years, so get your order in before it’s too late!

An Introduction To The Disneyland Monorail 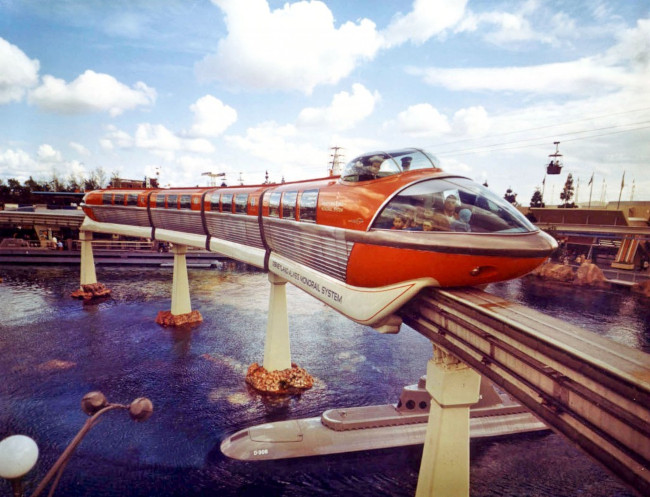 Nothing exemplifies the creativity and ingenuity of Disney better than the Disneyland Monorail. A crowning achievement of the resort, the monorail and Disneyland go hand in hand.

The Disneyland Monorail is a transportation system that takes guests for a ride along a single rail throughout Disneyland. The beloved icon provides a classic experience that you simply cannot miss when visiting the park.

Often referred to as a highway in the sky, the monorail towers above the park at 41 feet high and travels at a speed of 30 miles per hour.

The Disneyland Monorail made history by being the first operating monorail system in the United States.

Its debut was so monumental, the guest speaker at its opening ceremony was none other than Vice President Richard Nixon. Nixon joined Walt in giving a speech, as well as cutting a ribbon, to commence its first day of service. 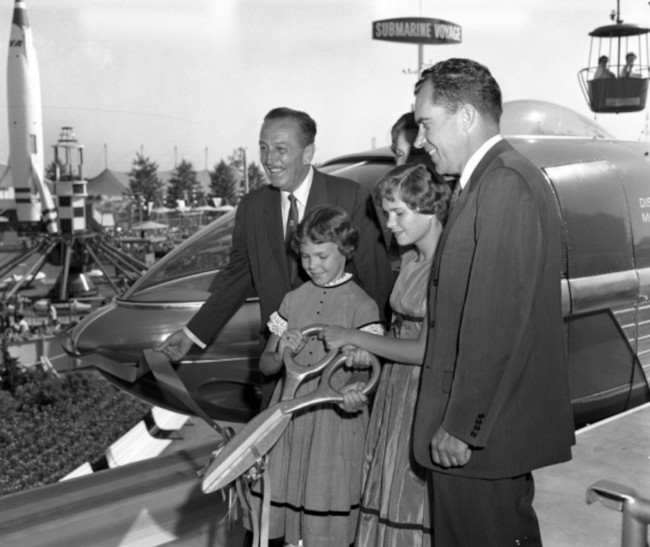 Walt Disney and the Nixon family cut the ribbon to the Disneyland-Alweg Monorail. Photo courtesy of Disney Parks Blog

Walt Disney’s Discovery of the Monorail 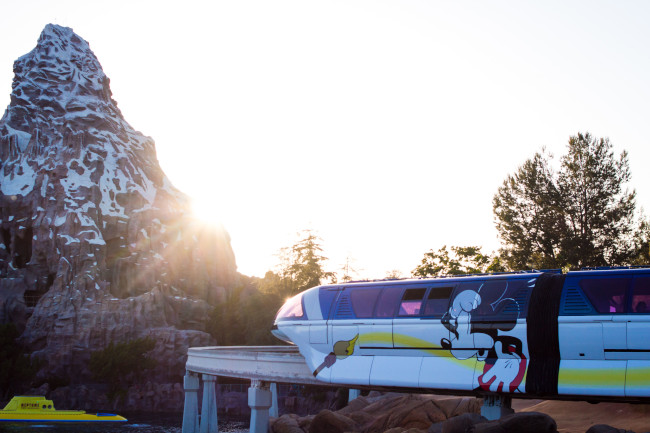 Walt Disney first discovered the monorail on a family trip to Germany. As he was driving through the countryside in Cologne, a unique train passed overhead.

It was a moment of serendipity as, unbeknownst to him, he was traveling on a road that ran through the grounds of an innovative business. Alweg Research Corporation would end up being responsible for giving Walt design plans to build his own monorail.

Walt’s mind had already been brewing over the years, as he constantly tried to discover new ways of moving guests around the park. When he saw the monorail, it was as if a lightbulb went off in his head.

After talking with Alweg about his ideas to collaborate, the project began in 1958. The building process originally started in Los Angeles, but later moved to Disney’s Burbank studios, in an attempt to speed up the process.

The Disneyland Monorail has undergone many changes over the years. Here’s a little history about its evolution. 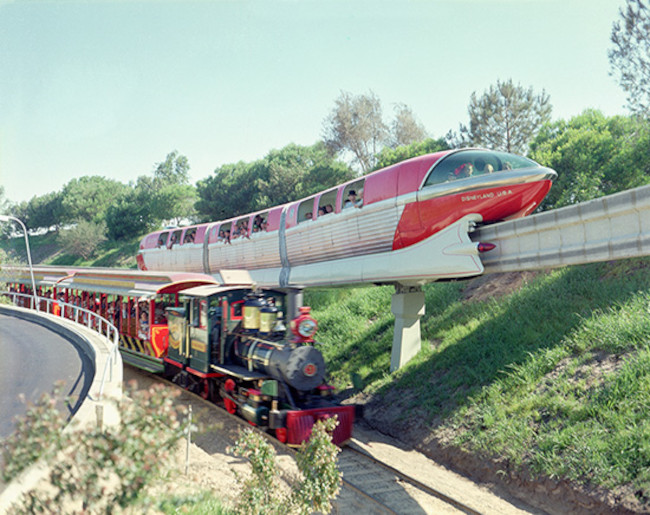 On June 14, 1959, the first Alweg version of the monorail opened. Known as the Mark I, it was initially created as a sightseeing attraction and was located in Tomorrowland.

The Mark I consisted of two different trains, one red and one blue, each complete with three of their own cars. In 1961, the monorail’s track was lengthened, and a second platform was added at the Disneyland Hotel. 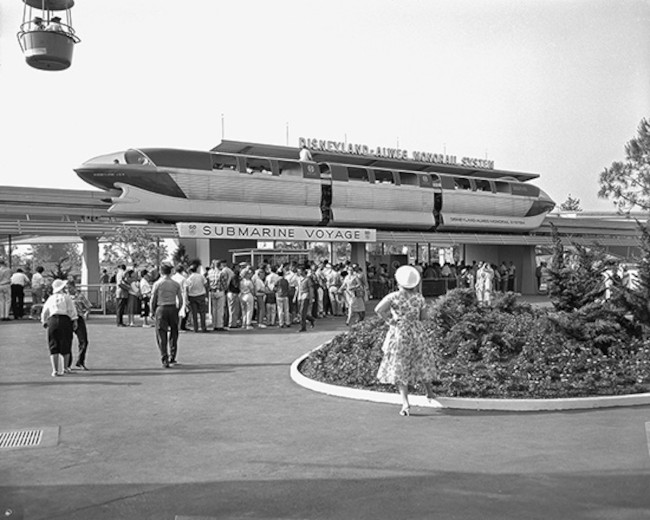 This made room for the induction of the Mark II monorail, which boasted four cars and a new yellow train. It also marked the monorail’s identity as a legitimate transportation system, being that there were now two stations to travel to and fro. 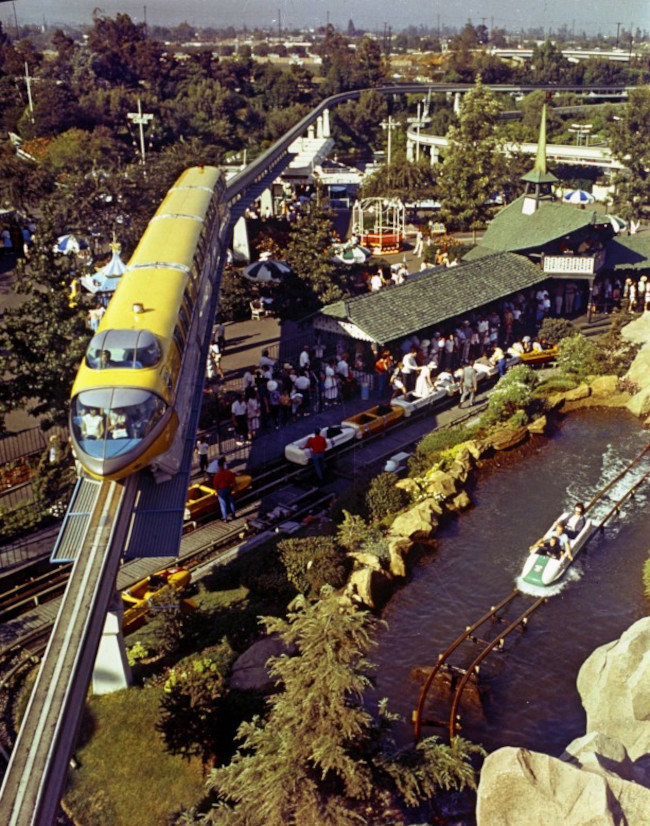 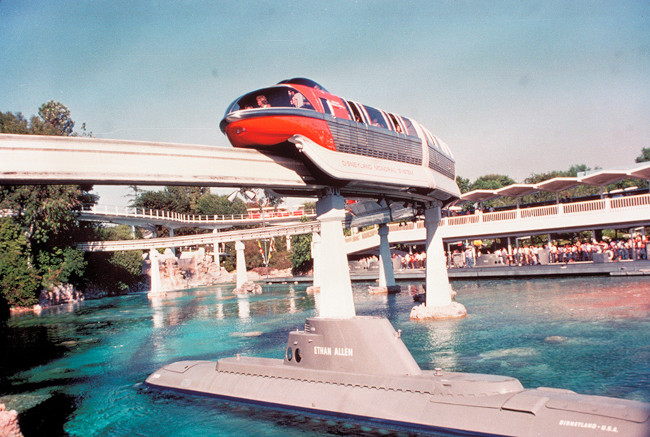 In 1968, the Disneyland Monorail was completely redesigned by Walt Disney Imagineering/WED Enterprises. Both the Tomorrowland and Disneyland Hotel platforms were expanded to accommodate the Mark III monorail, complete with an additional new green colored train.

In 1985, Disneyland started replacing the Mark III trains, due to wear and tear, rebuilding them into the more streamlined Mark V monorail. Orange and purple trains were added alongside the original red and blue color scheme. 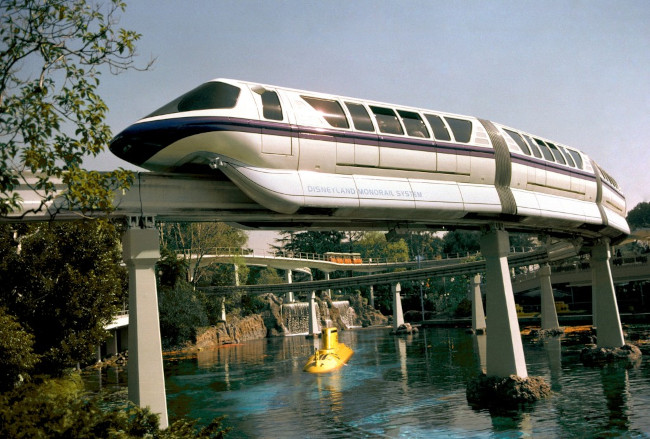 Fun Fact: The reason the Disneyland Monorail skipped numbers, never being referred to as the Mark IV or Mark VI, is because those names were already given to Walt Disney World Resort’s Monorail System.

In 1999, when Disney’s California Adventure began construction, the monorail experienced lengthy closures. During this time, Disney removed the Disneyland Hotel station and added a new station at Downtown Disney.

Although the Downtown Disney station opened in 2000, the monorail didn’t resume full capacity until 2001, due to construction. Its route now included a trip through Disney’s Grand Californian Hotel & Spa, as well as exciting views of the new park! 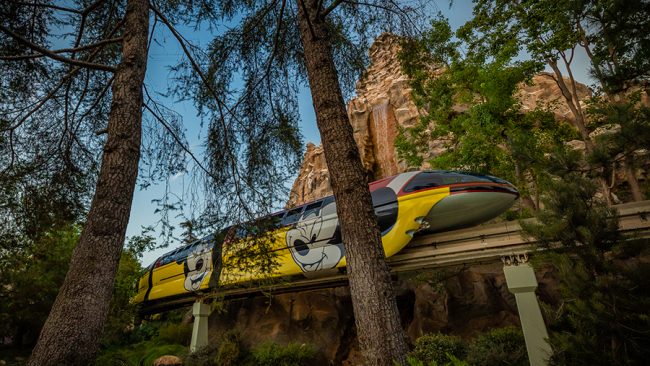 The Mark VII Monorail first debuted its newly refurbished, three-train fleet in 2008, with red premiering first, followed by blue. The trains arrived one by one upon their completion, with orange arriving last, completing the trio in 2009.

In 2012, Imagineers added a cheerful Cars-themed design to the monorail, in conjunction with the grand opening of Cars Land in DCA. Each train received a creative name as well as a unique narrative, indicative of the Cars universe. 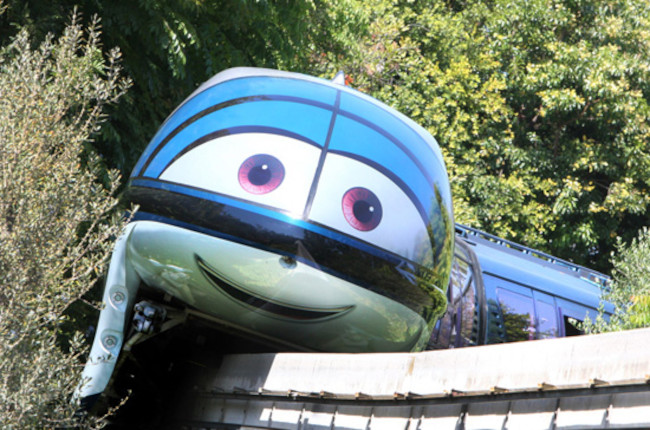 In 2013, the monorail resumed its standard look and narration and has remained the same until the present day. It currently has a retro-futuristic style, combining its classic 1959 history with the modern technology of today.

Fun Fact: Did you know that tucked away behind “it’s a small world” is what’s known as the “Monorail Shop”? The shop not only provides housing for the monorails, but it’s also the spot where routine maintenance is done on the trains, every single night! 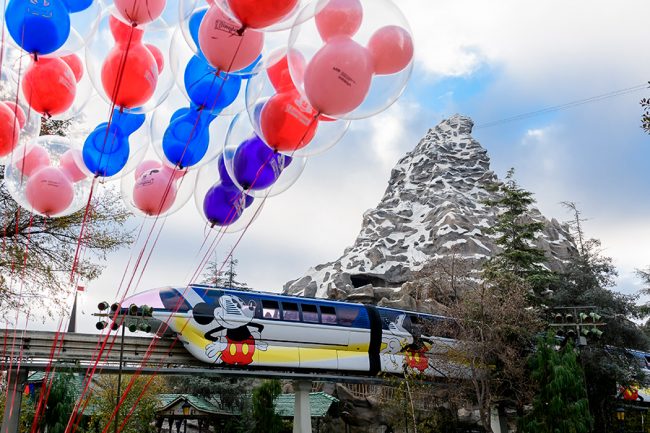 Today, two Disneyland Monorail stations remain, one in Tomorrowland and one in Downtown Disney. When the train departs, the horn sounds off twice, alerting guests of the scenic trip ahead.

The Disneyland Monorail travels a total of 2.5 miles and is 13 minutes long, round-trip. It glides over Fantasyland and Tomorrowland in Disneyland Park, as well as Grizzly Peak and Hollywood Land in California Adventure.

Not only are you treated to beautiful, aerial views of the parks on this trip, but you also get a sneak peak into some lesser-known areas. At certain parts in the ride, the monorail travels through behind the scenes, Cast Member-only locations, which are always fun to spot!

Fun Fact: The Disneyland Monorail remained closed long after Disneyland reopened after its COVID-19 closure. It finally reopened on Oct. 15, 2021.

Disneyland Monorail: A History of Magic 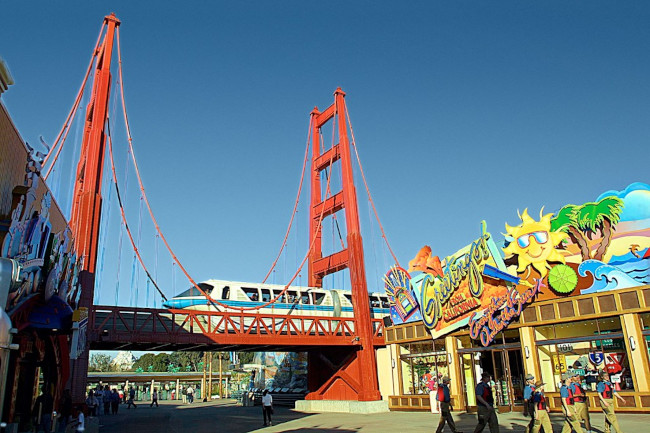 Disneyland just wouldn’t be complete without this classic landmark. A perfect illustration of a vision becoming reality, it continues to symbolize the magic of imagination and the belief that dreams really can come true.

Taking a trip on the Disneyland Monorail is like traveling in a time machine to Disney’s past. Although not technically referred to as a ride, it provides a thrill unlike any other attraction inside the parks.

BIG NEWS: The Disneyland Monorail Has Reopened at Last

3 Engine-Revving Facts About Autopia at Disneyland