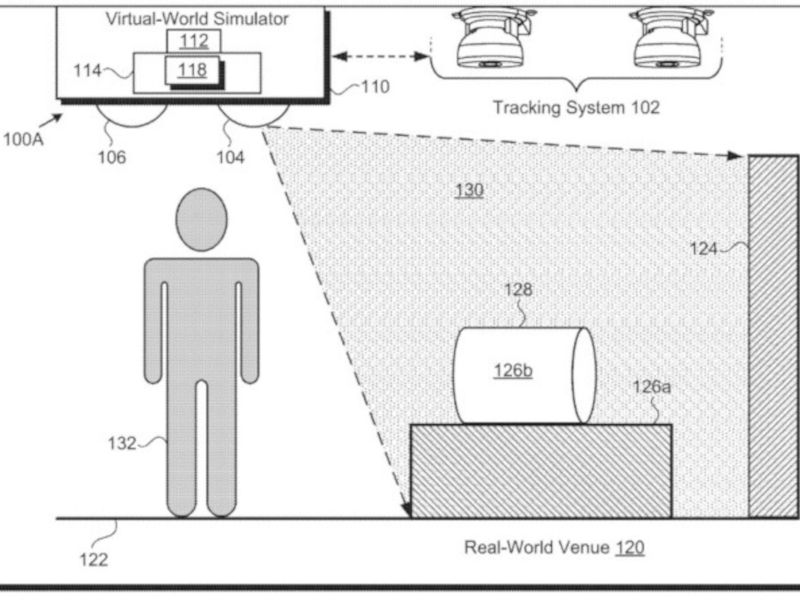 The future of magic at Walt Disney World and Disney Parks around the world is looking mighty bright. Last month, Disney was granted a patent for a “Virtual World Simulator,” which promises a 3D augmented reality experience free of headsets.

On Dec. 28, the US Patent and Trademark Office granted Disney Enterprises the patent for technology that can “track a moving perspective …  of a user in the real-world.” This would allow you to interact with a 3D environment in a manner similar to what you’d experience wearing a virtual reality headset.

Wearable VR peripherals is fine for, say, gaming at home. (On a related note, here’s looking forward to seeing what kind of games Disney cooks up for the PlayStation VR2.) But at a Disney Park, it wouldn’t be practical to hand out headsets to droves of guests.

That’s where the Virtual World Simulator comes in. Instead, you could simply step into a space and marvel as the magic unfolds.

How Would the Disney Virtual World Simulator Work? 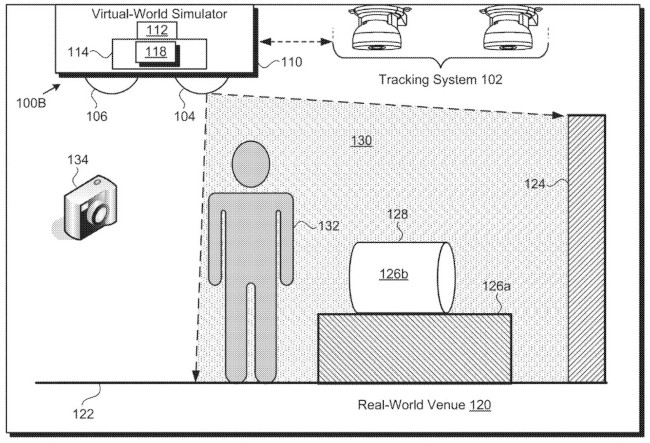 A mockup of how the Virtual World Simulator might work. Photo courtesy of the U.S. Patent and Trademark Office

Got a passion for dense technical language? You can get the lowdown from the application Disney filed with the USPTO. The detailed description clocks in at just shy of 6,000 words, so put on a fresh pot of coffee first.

Doesn’t sound like your bag? Well, here’s the short and simple: The Virtual World Simulator uses multiple projectors to create 3D images in a physical space. This doesn’t sound all that different from how Disney projects images onto water as part of World of Color or along Main Street, U.S.A., during Disney Enchantment.

The difference is that the Virtual World Simulator would use a tracking system. This would allow the system to alter the 3D projections based on your viewing perspective, creating greater immersion. It could find you via your smartphone, possibly using the My Disney Experience app, or your MagicBand.

Disney’s patent application lays out some ideas for how this would be done, including using cameras and optical sensors. Another option would be to use real-time mapping to figure track the space and your position relative to it. This would be called simultaneous localization and mapping, or SLAM, which immediately gets me thinking of that Onyx banger.

When Might Disney Make the Virtual World Simulator a Reality

If there’s one thing to know about patents, it’s that they don’t guarantee action. While Disney would no doubt love to make the Virtual World Simulator a reality, it might be a long time before you see anything like it at WDW.

Like cooking a delicious stew, you want to get the seasoning just right with a game-changing technology like this. So if Disney does move ahead with turning its patent into a product, expect a long period of trialing and testing and tinkering (oh my).

But there’s no guarantee that it’ll get that far. A spokesperson for Disney told the Los Angeles Times that “there are no current plans to introduce this technology into an upcoming experience.” Which isn’t to say there won’t be plans down the line.

And why wouldn’t there be? Discussing new augmented PhotoPass lenses back in October, Disney Marketing and Communications Coordinator Emily Southard writes for Disney Parks Blog that the goal is establishing a “theme park metaverse.”

“Every day, we are exploring new ways for technology to help us bridge the physical and digital worlds … to further immerse our guests in experiences they cannot find anywhere else,” said Southard.

The Virtual World Simulator sounds very much like a step in that direction, delivering awe and wonder as only Disney can. We’ll all keep a keen eye toward the future, because we can only imagine what else Disney’s got in store.

Have you tried your hand (or head) at virtual reality? Visit the WDW Magazine Facebook page and tell us what you thought of it and if it lives up to the hype.