Disney Skyliner: 6 Things You Should Know 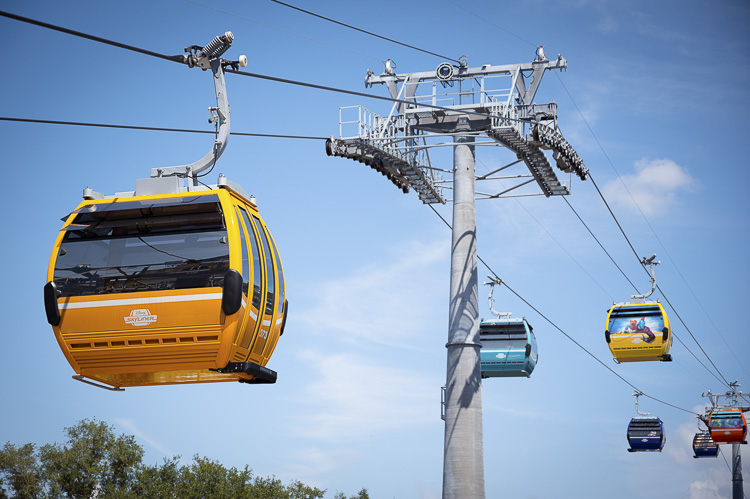 The Disney Skyliner is first took flight on September 29, 2019, ushering in a new era of Walt Disney World guest transportation. On Friday, we were invited by Disney to attend the official dedication ceremony and preview the Skyliner before it opens to guests. 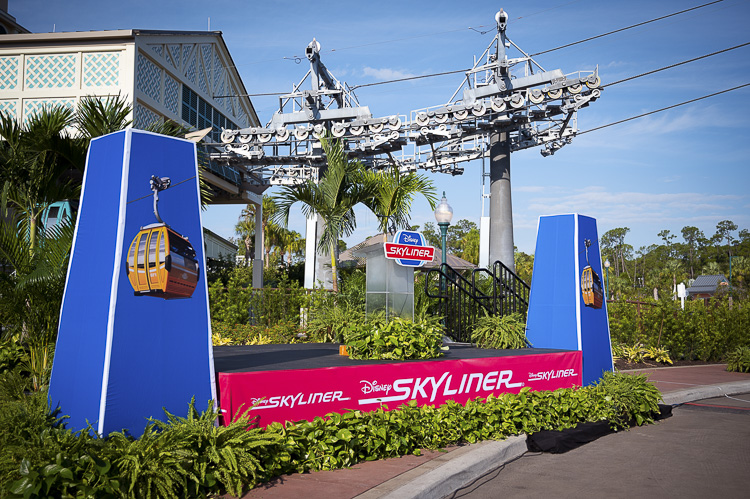 We were invited to attend a special dedication ceremony ahead of the Skyliner’s opening day. Photo by Courtney Reynolds

What is the Disney Skyliner?

The Disney Skyliner is an overhead gondola transportation system that allows guests to travel quickly between select Walt Disney World parks and resorts. On the outside, the gondola cabins are vibrant and colorful—some of which are even decorated with popular Disney characters. On the inside, they’re spacious and comfortable and can carry up to ten passengers. 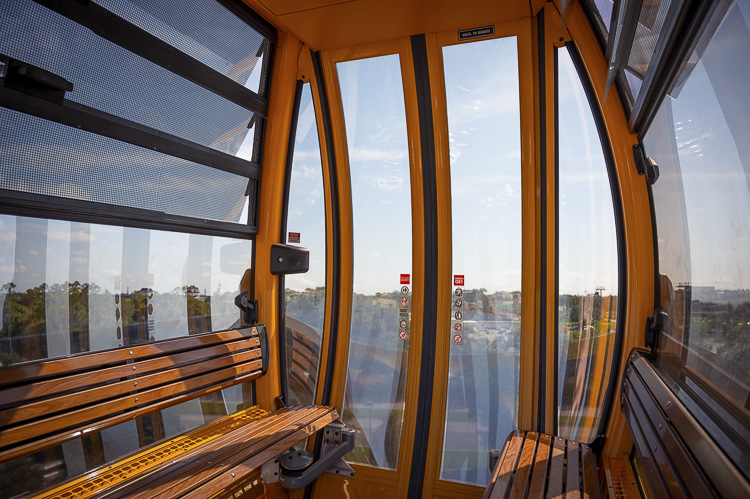 The cabin interior can fit up to ten guests. Photo by Courtney Reynolds 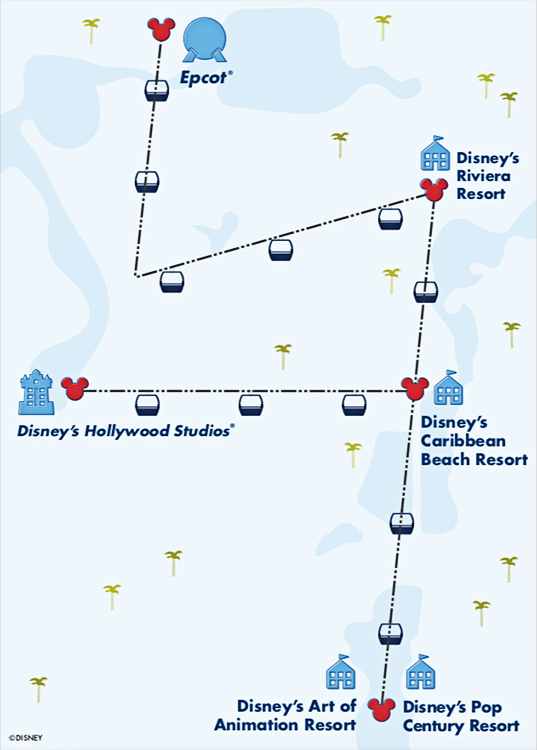 Travel times for any Disney transportation can vary due to crowd level, weather, and other unpredictable circumstances. The same goes for the Skyliner. We’ve put together a list of travel times for you, but please keep in mind that these are estimates based on ideal circumstances.

It’s always better to allow for extra time when using a high volume transportation system just in case. These estimates don’t take into account the time it takes to disembark and change lines at Disney’s Caribbean Beach Resort.

From Disney’s Caribbean Beach Resort to:

From Disney’s Riviera Resort to:

From park to park:

Guests will not be allowed to disembark at Disney’s Riviera Resort until the resort opens in December. Until then, guests will remain in the cabin and continue to the next station.

No exact hours of operation for the Skyliner have been announced, but it is believed that flights will begin roughly 30 minutes prior to park open and end an hour after park close. Weather permitting, of course. 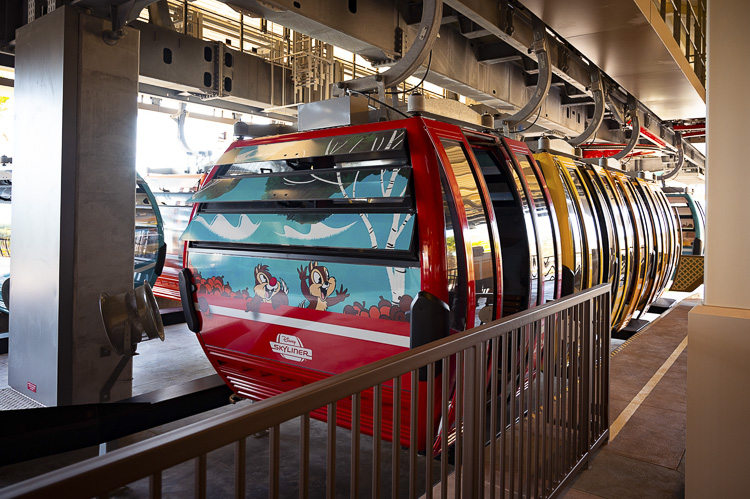 The Skyliner cabins are continuously moving during the loading process. Photo by Courtney Reynolds

While in the air, the gondolas can reach a whopping 11mph. They slow down to a crawl when entering the station, but do not stop for loading or unloading. Once the doors open, you will be directed to step into the cabin while it’s slowly moving down the platform. It sounds scary, but it’s not much different than loading onto a Doom Buggy or the People Mover.

Guests who need assistance—including those with wheelchairs or ECV’s—can request to use the stationary boarding area. Gondolas in this area come to a complete stop to allow for a little extra boarding time. Once everyone is loaded, the gondola moves seamlessly back onto the line.

When you reach your destination, the gondola will automatically bring you the stationary loading area at the next station so you can disembark. 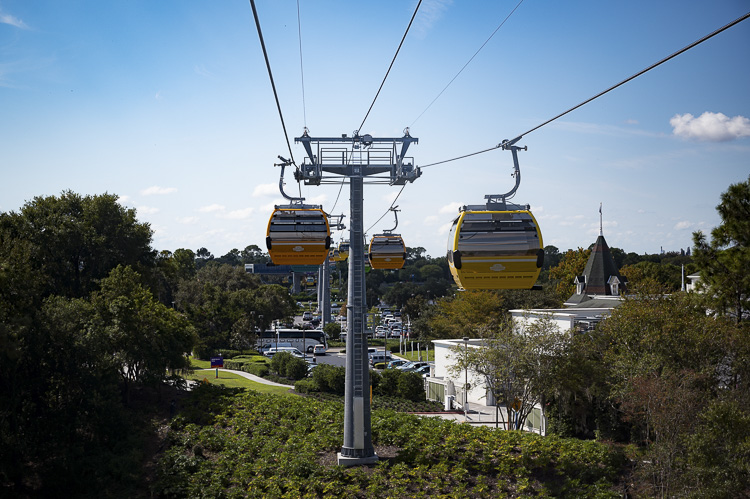 The Disney Skyliner made headlines when it was revealed that the cabins wouldn’t have an air conditioning system inside. If you think about it, it’s not very practical to install an A/C unit inside every single cabin and I completely understand why Disney chose not to. On the other hand, Florida is hot. And being 60ft closer to the sun inside a floating box sounds even hotter.

I’m here to tell you that the lack of A/C is not as bad as it sounds. Each gondola has a cross-ventilation system near the top of the cabin that allows for maximum airflow during flight. During my ride, I was quite comfortable. The breeze coming in was similar to driving with the windows down.

The only time this will be problematic is when the gondola system stops mid-flight. This didn’t happen to me during any of my flights on Friday, but I heard it happened a few times during Cast Member previews. We’ll see how this plays out as the Skyliner begins to operate daily. 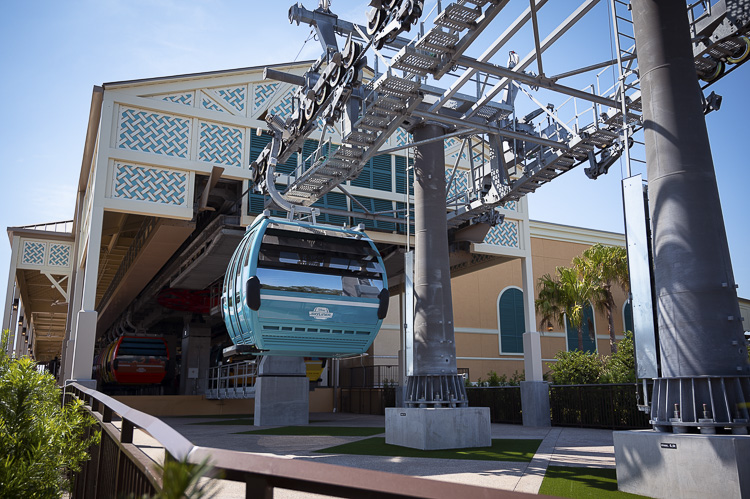 Disney’s Caribbean Beach Resort is the main hub for the Disney Skyliner. Photo by Courtney Reynolds

Have a Nice Flight

At this point, you’re probably wondering, what’s it like up there? If you asked me my level of interest in the Skyliner when it was announced two years ago, I would have told you I couldn’t care less. I didn’t see the need for it and was confused about why everyone was so excited about it.

I soon realized that my disinterest was actually a result of fear. I’m not afraid of heights or anything, but, for some reason, the thought of riding the Skyliner was not a pleasant one for me. Seeing the gondolas whiz over my head at the dedication ceremony did not help, even with Mickey Mouse dancing on stage.

I stalled as much as I could until it was time for me to ride. I sat down in the very center of the bench—alone—going through every single horrible scenario in my mind. As the doors closed, the Cast Member said, “Have a nice flight!” and off I went. 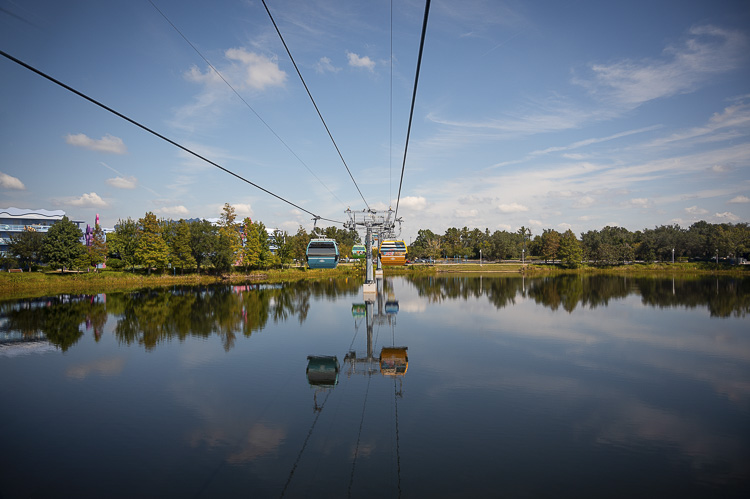 The Disney Skyliner offers breathtaking views from above. Photo by Courtney Reynolds

As with all forms of flying, the takeoff and landing were the worst parts. And by “worst parts” I really mean that it was just a little bumpy. That’s it. Overall the ride was very smooth, with just a little turbulence whenever you would glide by the giant Skyliner poles.

I was surprised at how much I actually enjoyed the experience.

I ended up riding it three more times after that. I wasn’t a believer at first, but now I look forward to using the Skyliner any chance I get. 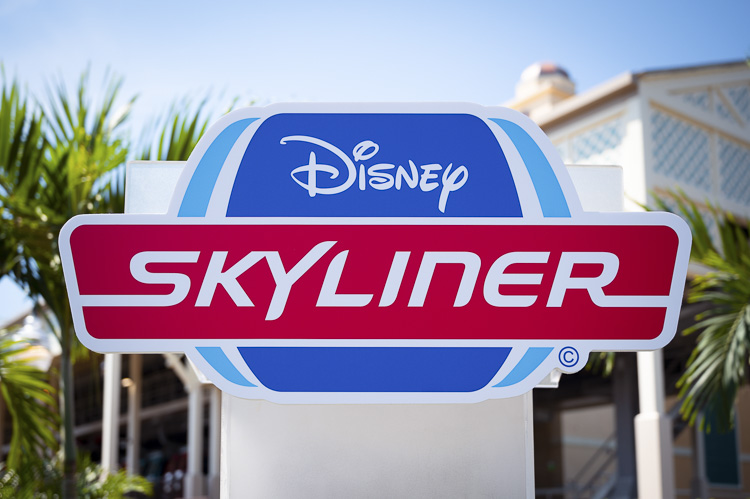 Once again we’d like to thank Disney for giving us the opportunity to preview the new Disney Skyliner. Make sure you’re following us on Facebook and Instagram so you don’t miss out on live coverage of these media events.