Disney Skyliner Map: How to Get to EPCOT, Hollywood Studios, & Skyliner Resorts 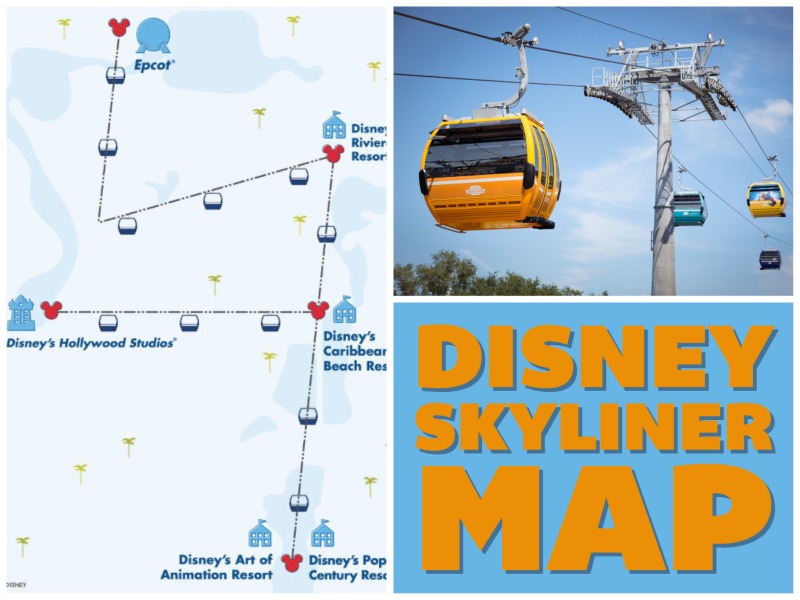 Use this Disney Skyliner map when resort hopping or traveling to EPCOT or Hollywood Studios.

On Sept. 29, 2019, the Disney Skyliner officially began to operate at Walt Disney World Resort, giving guests a new way to resort hop and get to EPCOT and Hollywood Studios.

If you’re used to using the Disney World bus transportation or hopping on the monorail, be sure to consult a map of the Skyliner before your next trip. Once you see how convenient it makes travel to EPCOT and Disney’s Hollywood Studios, you might want to consider leaving your normal resort on the Seven Seas Lagoon and instead looking at a Value resort like Pop Century or Art of Animation. 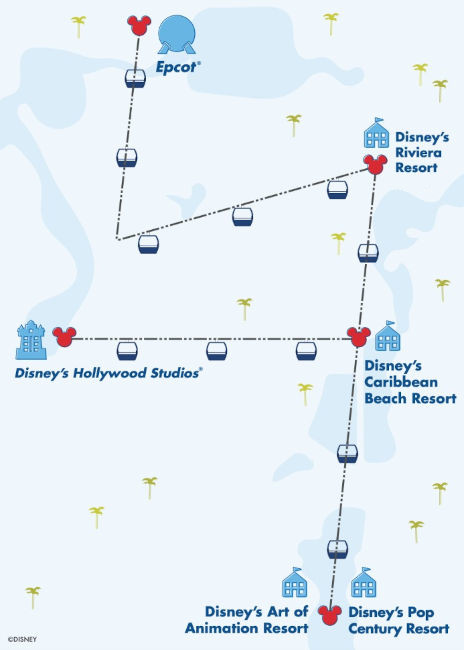 As you can see, the Skyliner has three ends to it: one at Hourglass Lake between Art of Animation and Pop Century, one at Hollywood Studios, and one at EPCOT. There are stops along the way at Caribbean Beach Resort and the Riviera.

Here’s another look at the Skyliner route with a custom-made Disney Skyliner map. If you ever want to map out your own trips, you can access Disney Park maps via My Disney Experience or directly on the website. 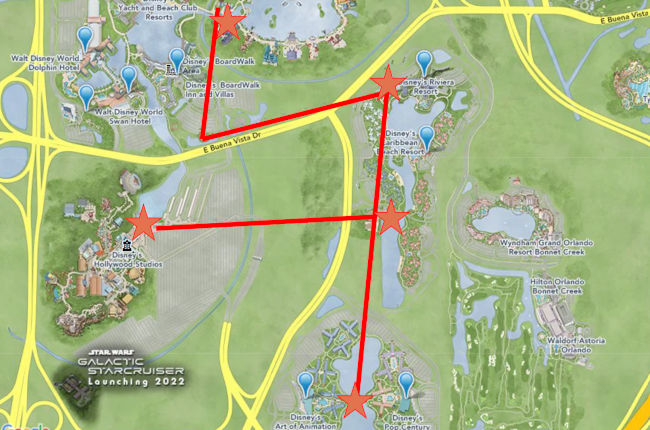 There are five Skyliner Stations on Walt Disney World Property:

Between Art of Animation and Pop Century

When you look at your Disney Skyliner map, you can see that this station (the farthest from the parks) sits in between the two resorts. A bridge connects the two resorts (Art of Animation was once meant to be an extension of Pop Century, hence the easy connection), and the Skyliner Station sits smack dab in the middle of the bridge, on Hourglass Lake.

Depending where at each resort you’re staying, plan on a 5- to 10-minute walk to the station. Be ready to speed-walk (and early) if you are rope dropping. 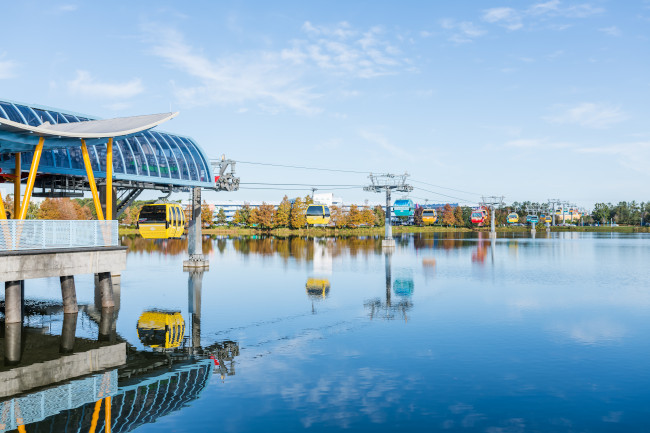 A view of the Hourglass Lake Skyliner stop between Art of Animation and Pop Century. Photo by Laurie Sapp 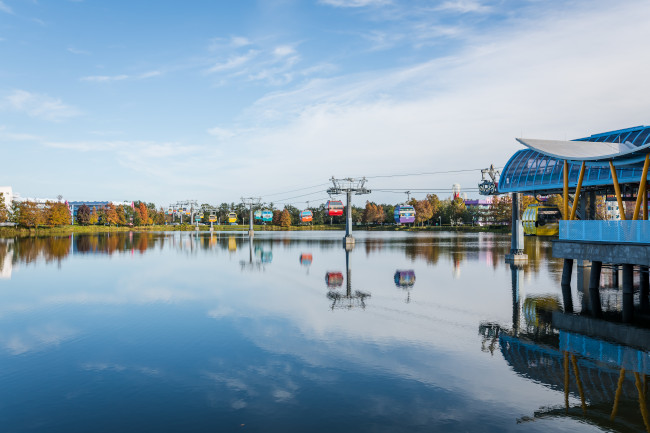 Cross the bridge from your resort to find this Skyliner Station. Photo by Laurie Sapp 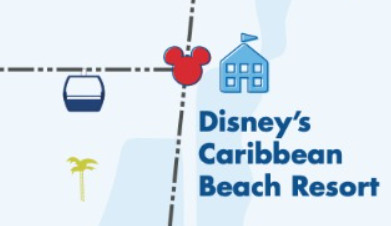 The Disney Skyliner Station at the Caribbean Beach Resort is located just across the lake from the Trinidad section of the resort. (If you’ve ever stayed in a Pirate Room, this is the same section.) 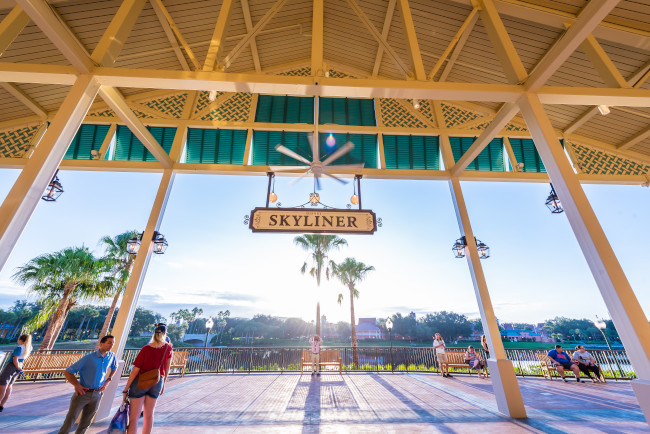 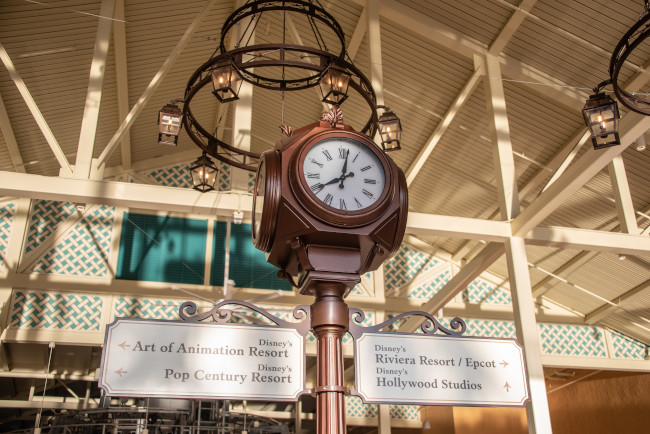 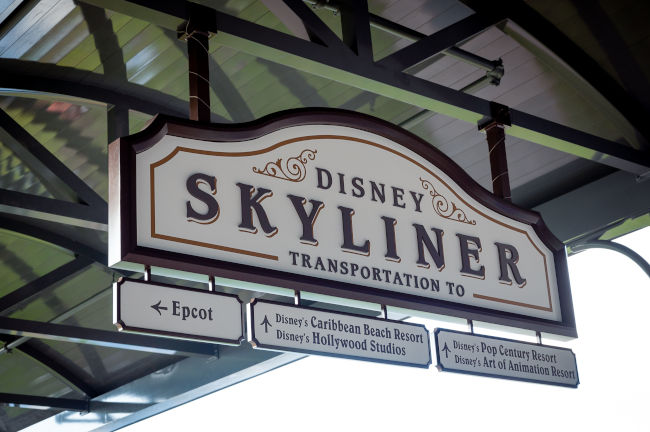 Signage at the Riviera Skyliner Station. Photo by Courtney Reynolds 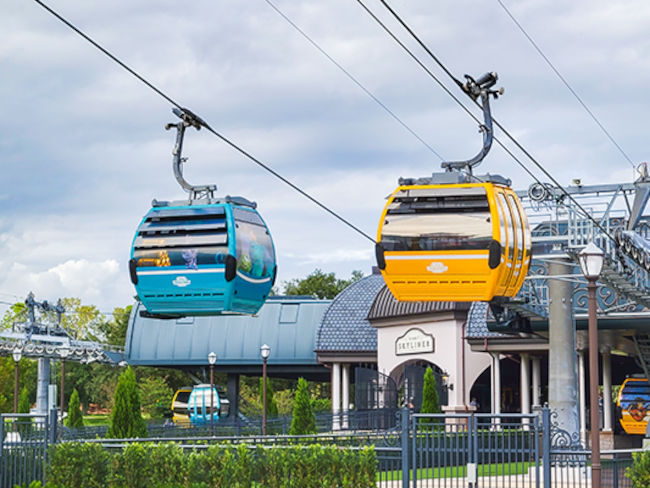 At the Caribbean Beach Resort station, you’ll need to change over to a separate line of the Skyliner to get to Holly wood Studios. This will drop you at the front gate of DHS. 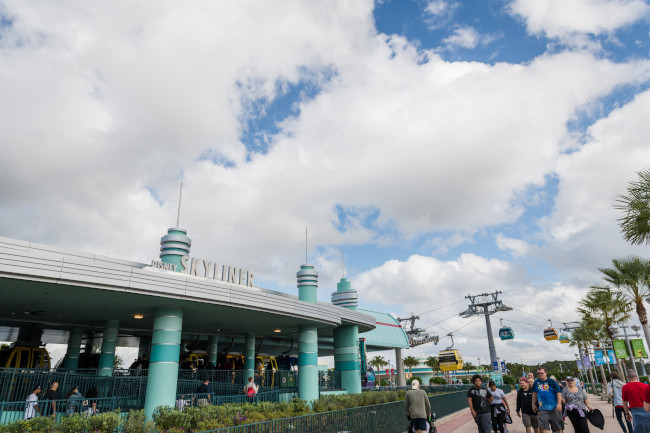 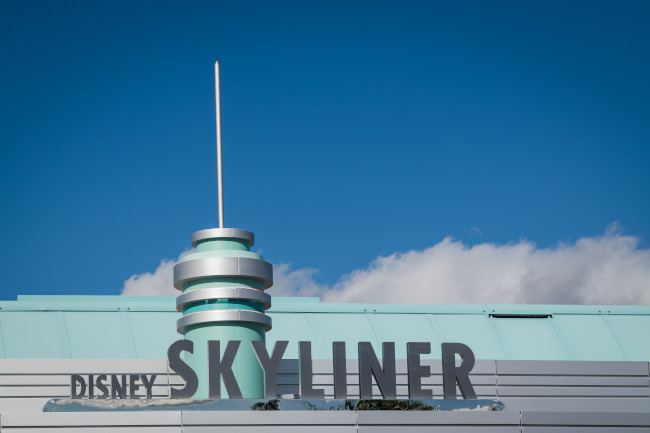 The sign at the Hollywood Studios Skyliner Station. Photo by Laurie Sapp

Unlike the Skyliner to Hollywood Studios, which puts you at the front entrance, the Skyliner to EPCOT takes you to the International Gateway entrance. If you’re visiting EPCOT primarily to explore World Showcase, to enjoy festival offerings, or to rope-drop Remy’s Ratatouille Adventure, this is the ideal starting point anyhow. 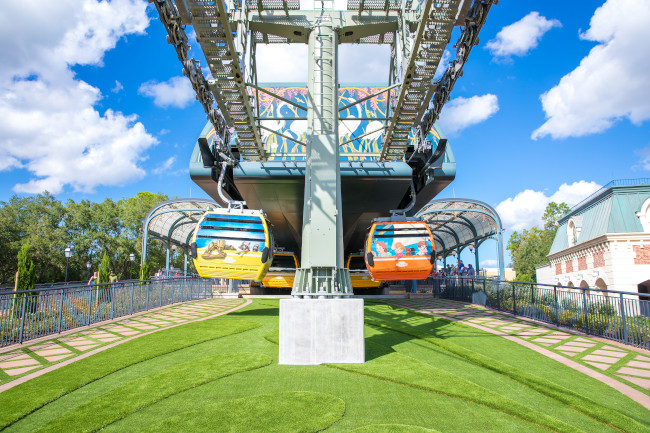 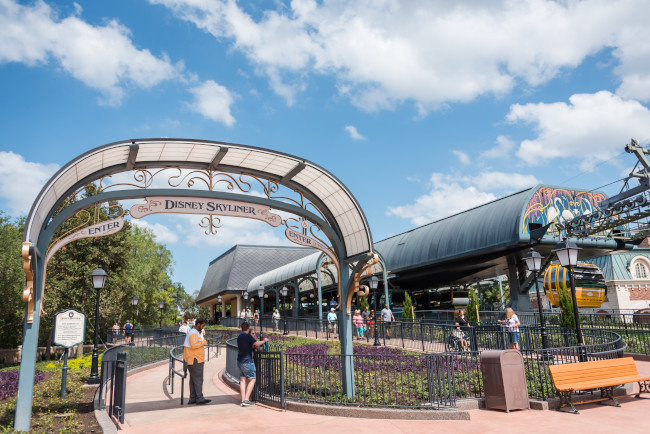 The line forms here to ride back to your hotel after Harmonious … and it gets loooong. Photo by Laurie Sapp

A Note on the Turn Station 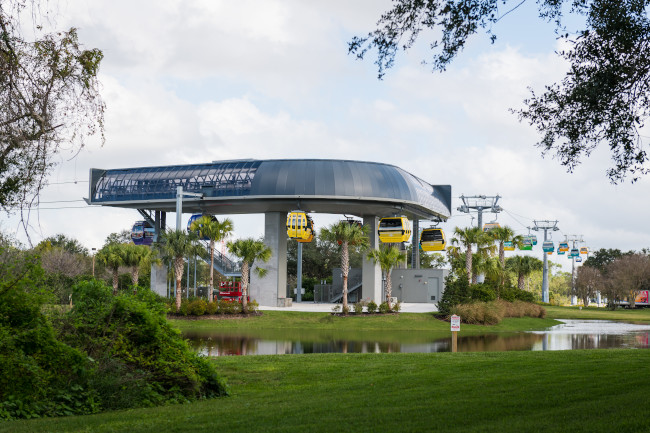 Your Skyliner gondola will slow down to turn here. Photo by Laurie Sapp

Be prepared for the Skyliner gondola to slow down during your journey between the Riviera and EPCOT. There’s a turn station here; you don’t get off or on, but to redirect to the resort or EPCOT, respectively, the gondola will need to slow down to make the turn.

However, because of the EPCOT station, you can easily take the Skyliner to Hollywood Studios when staying at an EPCOT area hotel:

Note, however, that there is a walking path from these EPCOT hotels to Hollywood Studios. It’s roughly a 10-minute walk. If you want to avoid the Skyliner lines, get in some extra Disney steps, and arrive as early as you’d like for a Hollywood Studios rope drop, it may make more sense to walk.

So how long does it take to get from A to B on the Skyliner? We’ve broken it down based on resort. Note that these estimates do not include time spent in line or the time it takes to change lines at Caribbean Beach Resort.

From Disney’s Art of Animation Resort and Disney’s Pop Century Resort to:

From Disney’s Caribbean Beach Resort to:

From Disney’s Riviera Resort to:

From park to park: 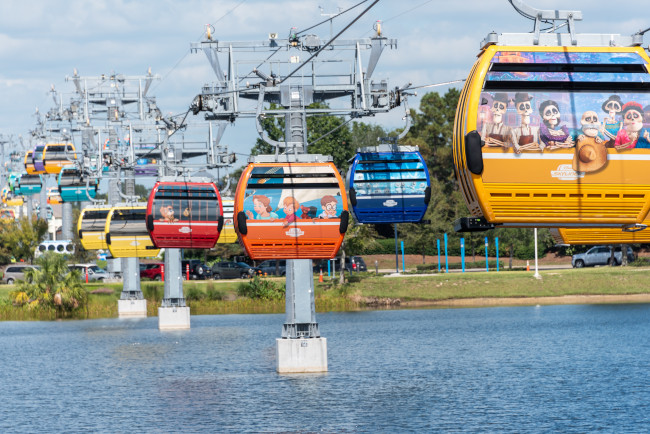 Here are some fast facts about Disney’s Skyliner:

Planning to use the Skyliner at Walt Disney World? Check out our tips before you take flight:

If you intend to rope drop EPCOT or Hollywood Studios, you’ll want to get in line early. Many other guests at your resort will have had the same idea. How early to line up for the Skyliner depends on the time of year and which resort you’re at. 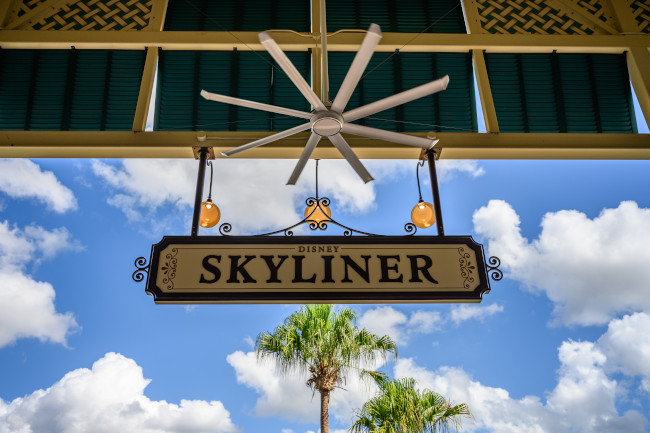 If you’re at Pop Century or Art of Animation and going to EPCOT, you’ll want to be on one of the first gondolas to have a chance at a true rope drop since guests staying at Caribbean Beach and the Riviera have fewer stops and a shorter distance to go.

Keep in mind, if you are going to Hollywood Studios and traveling from Pop Century, Art of Animation, Riviera, or and EPCOT resort, you’ll have to change tracks at the Caribbean Beach Skyliner Station. That means you’ll have to wait in a second line.

Check the Schedule for Rope Drop

Make sure you know what time the Skyliner will start operating on the day you hope to rope drop Hollywood Studios or EPCOT. If it will not be running early enough, consider alternate transportation, like a bus, walking, or rideshare. 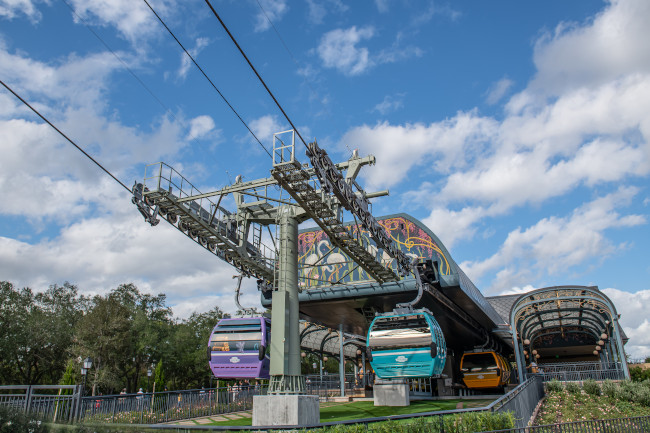 Often, Disney transportation will start earlier than advertised, but never count on this.

Pay Attention to Your Stops

Traveling to Hollywood Studios? Don’t get too lost in the view outside your window because you’ll need to be ready to hop off at Caribbean Beach Resort. Likewise, if you’re traveling after a long day at EPCOT, don’t fall asleep and miss your stop!

Skip If You Have a Fear of Heights 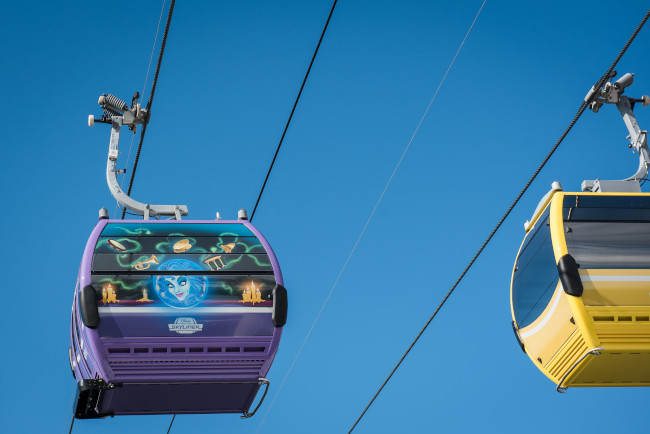 The Skyliner flies up to 60 feet off the ground. Photo by Laurie Sapp

Don’t do so well with heights? The Skyliner uses hanging gondolas 60 feet up. If you have a fear of heights—or if you’re claustrophobic—the Skyliner might not be for you. But if you can handle Tower of Terror and Splash Mountain, you’ll probably be fine. 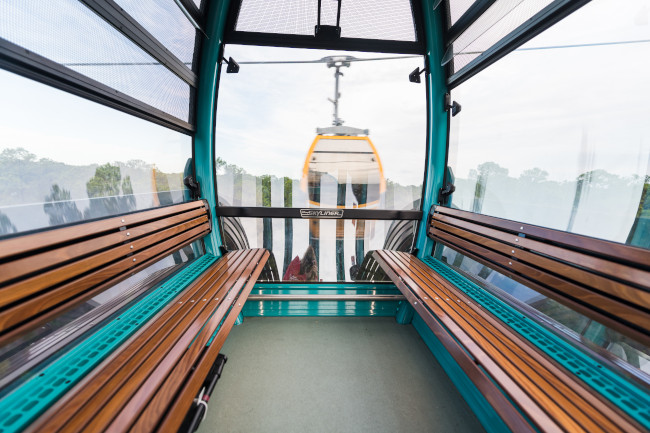 The interior is spacious for some, but if you don’t like the thought of being locked in a box 60 feet up, consider alternate transportation. Photo by Laurie Sapp

The Skyliner is famously not air conditioned. Seems crazy for a transportation system that bakes in the Florida sun. However, they were designed to give guests a constant breeze as they move.

The problem? Sometimes, the Skyliner will stop moving. If you need constant AC, consider an alternative transportation system—but if that’s the case, a trip to Orlando may not be right for you …

Don’t Freak Out When the Skyliner Stops

Some guests with varying levels of mobility, or even parents with strollers, might require that the Skyliner is stopped to board. Because the Skyliner is comparable to the Omnimover system, the whole course will stop when this happens. Don’t panic; the system is designed to do this!

The Disney Skyliner is more than a transportation system. It’s a free ride in and of itself. If you have an afternoon and no park reservations, hop on board for a fun tour of the resort. You can also hop off at various hotels to try out new restaurants. 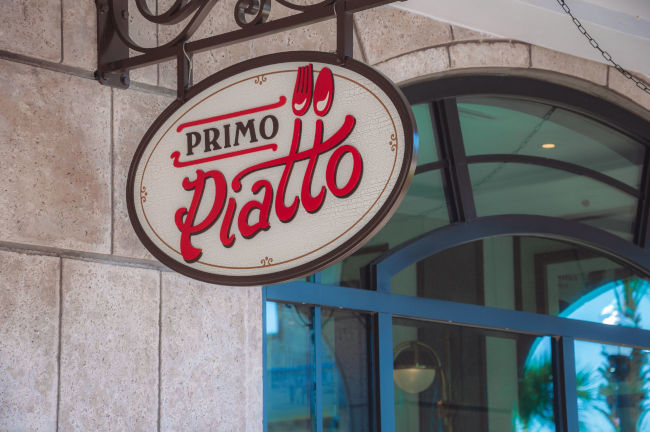 Take the Skyliner to the Riviera to try Primo Piatto. Photo by Danny Shuster

Tip: The Riviera has a Quick-Service restaurant called Primo Piatto that has one of the best breakfasts on property.