Disney Return of the Headless Horseman Board Game Review: Spooky Fun for Families 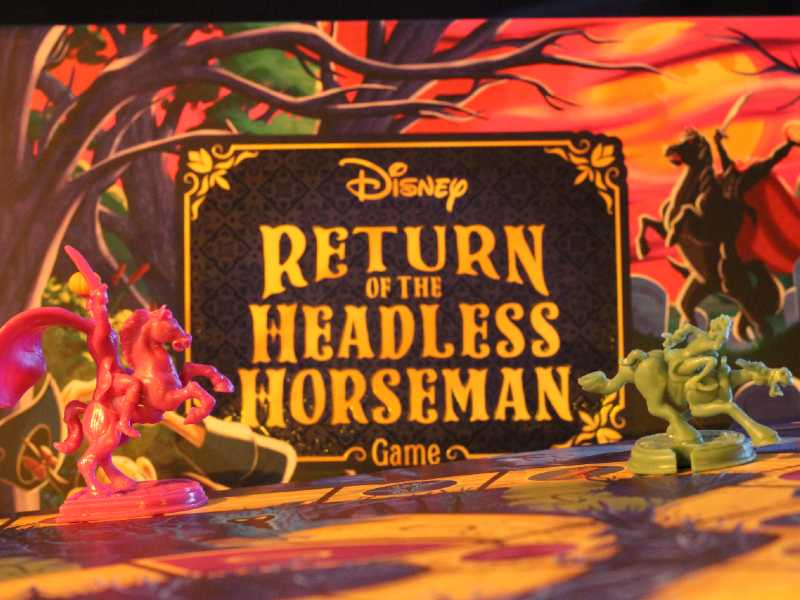 Settle in for our Return of the Headless Horseman board game review; will it be your perfect Halloween game?

October is nearly here once again … and I’m excited to celebrate the spookiest time of year! There’s nothing I enjoy doing more to celebrate Halloween — apart from watching a scary movie, of course — than gathering with friends around a table, dimming the lights, and playing a horrifyingly fun board game.

Once your children are old enough to enjoy being spooked, I have a board game to recommend: Disney Return of the Headless Horseman Game. It’s based on Walt Disney’s 1949 animated adaptation of Washington Irving’s gothic story, The Legend of Sleepy Hollow. 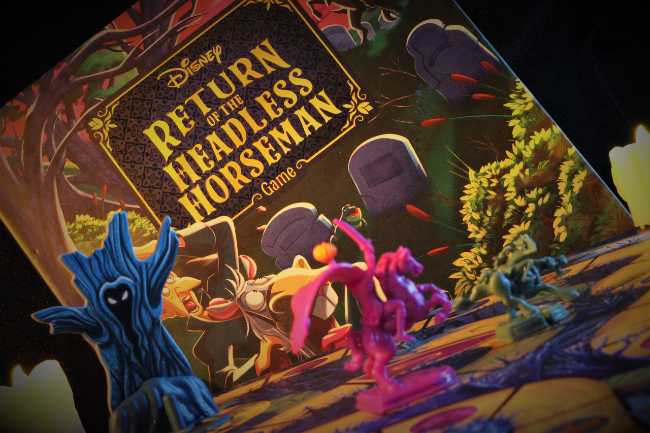 Funko Games’ latest release is aimed at families with children ages 6 or older. This kid-friendly caper invites 2 to 4 people to reenact the thrilling events depicted in The Adventures of Ichabod and Mr. Toad.

It’s up to your team to guide the superstitious schoolmaster Ichabod Crane in his scared sprint through the woods so he can outrun the headless ghost that haunts him!

I received a copy of Disney Return of the Headless Horseman Game from Funko, and I immediately got chills — of excitement! I was eager to open the box and find out if this game would be added to my yearly Halloween roster… or disappear the next morning without a trace.

Intrigued? Read this Headless Horseman board game review to see if this will be your perfect family game this spooky season!

How to Escape the Headless Horseman

Set the spooky scene by unfolding the board that depicts Ichabod’s would-be path to safety. His figurine begins at the Van Tassel Farm, while the menacing Headless Horseman figure lies in wait a few paces back — lurking in the shadows, ready to give chase. 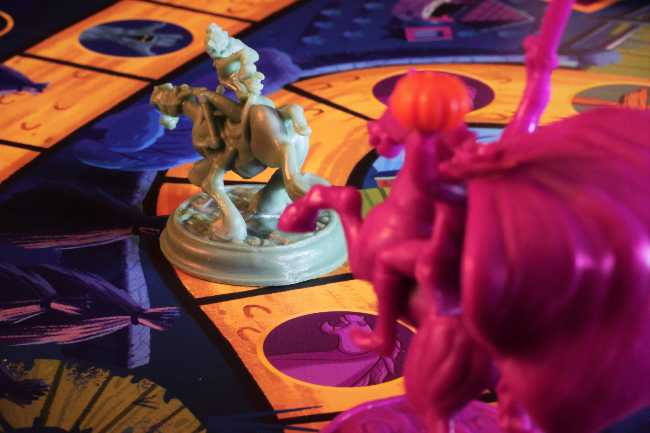 That’s the extent of the setup. Now it’s time for you and your teammates to bring Ichabod to shelter as quickly as possible!

How does the terrified Ichabod ride his horse along the winding path through Sleepy Hollow’s frightening forest? This is a cooperative endeavor, so everyone must work together — but silently!

All players select a card from their hand without communicating with the rest of the group. When everyone simultaneously reveals their cards, you must hope that at least two of them match. Any cards that do will determine the number of spaces that Ichabod rides his horse Gunpowder forward along the route. Depending on where he lands, he may discover a shortcut through the woods or get an extra burst of speed forward.

However, you must beware of scare spaces that compel you to flip over terrifying tiles. If the four-part image of a flaming jack-o-lantern is assembled, it’s the end of the road for poor Ichabod! 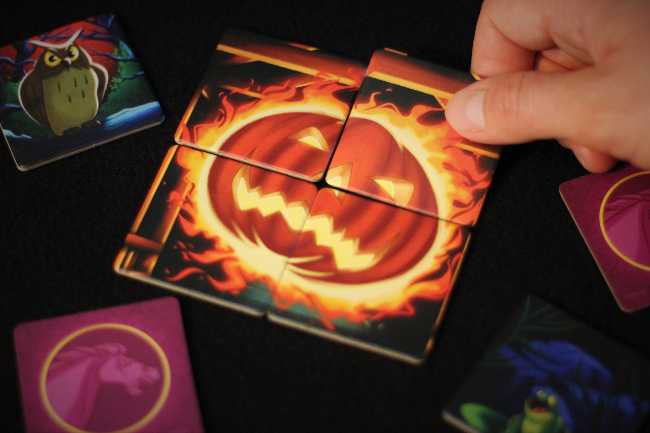 Don’t forget that this is a perilous pursuit… the Headless Horseman must proceed, too! Count up the number of horseman icons shown on the cards everyone revealed earlier and move the frightening figure that many spaces forward. If the cloaked rider ever catches Ichabod, you’ll flip over another fright tile.

Lucky enough to reach the end of the trail before revealing the rider’s fully formed pumpkin head? Then Mr. Crane has dashes for cover inside the covered bridge at the edge of the woods. Congratulations on guiding Ichabod home; you’ve won the game and can celebrate. Just remember… don’t look behind you!

Is This Game Too Scary for Young Kids?

Considering the simplicity of Disney Return of the Headless Horseman Game, it’s squarely targeted at young children who can play with their parents. But is the scary subject matter too intense for this demographic? 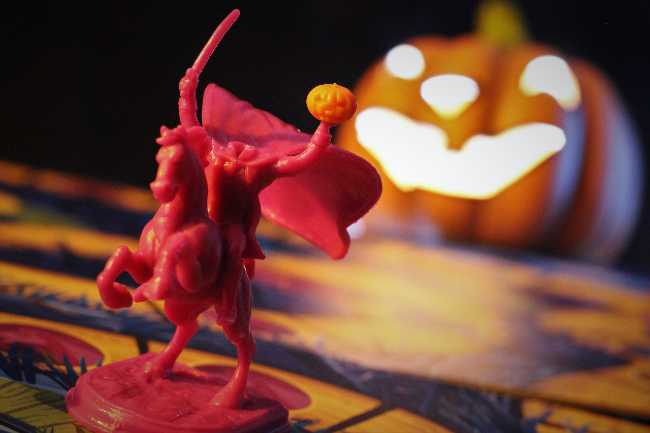 Obviously, each child’s tolerance for terror is different — as is what they find scary — but I think Funko Games does a good job of capturing the excitement of a thrilling pursuit while minimizing the visceral dread.

In fact, it’s probably less intense than the cartoon it’s based on! The images of the Headless Horseman on the cards and board are cartoonish in depiction, exaggerated in style without being gruesome. You don’t have the ghost’s menacing laugh, the frantic music, or the spooky setting here ratcheting up the terror as you do in the film.

Plus, Ichabod’s fate isn’t certain this time; you have the chance to save him from a mysterious demise! 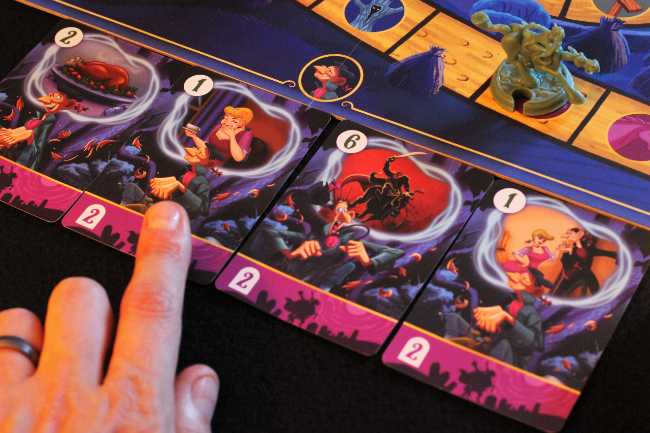 In many ways, Disney Return of the Headless Horseman Game reminds me of another hair-raising release from Funko Games: Disney The Haunted Mansion Game. Both incorporate ghastly concepts and a spooky setting without evoking the actual horror of those elements.

Ultimately, it’s up to you to decide if this is something you should purchase for your child, but I’ll say that I would’ve been thrilled to receive this game in my trick-or-treating haul as a kid.

Headless Horseman Board Game Review: Is This a Treat… or a Trick?

Now to answer the second question you’re wondering: Is Disney Return of the Headless Horseman Game actually a fun game to play?

I didn’t have high hopes upon reading the instructions. The game appeared quite basic with its very simple rules, antiquated linear movement track, and (seemingly) obvious approach to an easy victory. To my shock, I underestimated it and actually had fun. 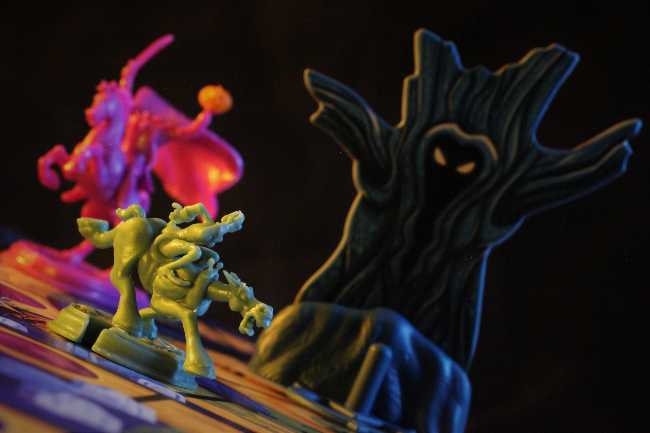 Here’s my honest opinion: Disney Return of the Headless Horseman Game is a better game than it sounds on paper. Its design evokes the constant fluctuations between elation and dread that an exciting chase does — especially the one depicted in Disney’s animated tale.

Every turn brings a moment of trepidation as everyone flips over their cards and sees the results. When there’s a match, there’s elation as Ichabod moves further ahead. When there isn’t a match — or the match is bad for Ichabod — the tension ratchets up higher as the spectral pursuer nears.

Also, there’s constant uncertainty about if and when you could lose. Every time you flip over a tile, you may elude danger or wind up even closer to your doom. 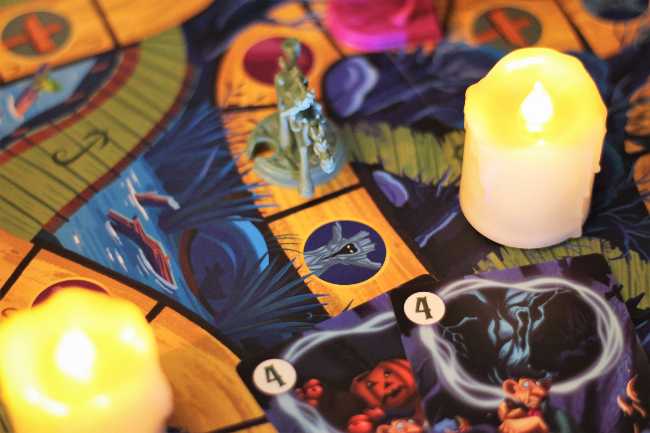 This game checks many boxes that make it a good choice for families:

What I like most about Disney Return of the Headless Horseman Game is that it’s a great transitionary experience for children who are ready to graduate from kids’ games but aren’t ready for grown-up ones yet. The rules are simple and easy to learn, but it urges players to think carefully about their actions.

It requires more strategy than simply picking the highest-numbered card in your hand and flipping it over. You must assess the path ahead and determine which spaces are safe for Ichabod to land on. Do you have a card that matches one of those numbers? What do you play if you don’t? Which card is someone else most likely to also possess (based on what’s already been used)?

Gauging risk and reward, assessing probability, prioritizing options — all without talking to anyone else at the table. 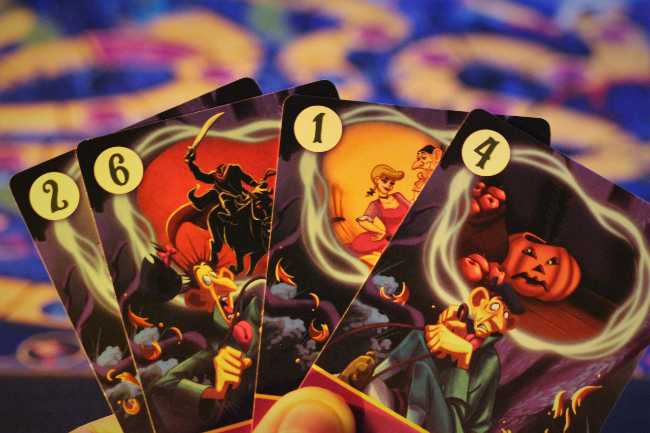 I played it with a bunch of different families, and each instance was enjoyable. Most of the time, we won — though there were some close calls that had us holding our breath. And it was rewarding to see children beam with pride when they picked a good card that helped the team.

If the theme of this game is acceptable for your little ones, I think Disney Return of the Headless Horseman Game is worth buying for your Halloween fun. It’s gripping fun to play as a family as you work together to outrace your pursuer.

Our writer received a complimentary product from the publisher for review. All opinions are honest, and advice has been given with the interest of the reader in mind. Thanks for tuning in to our unbiased reviews!