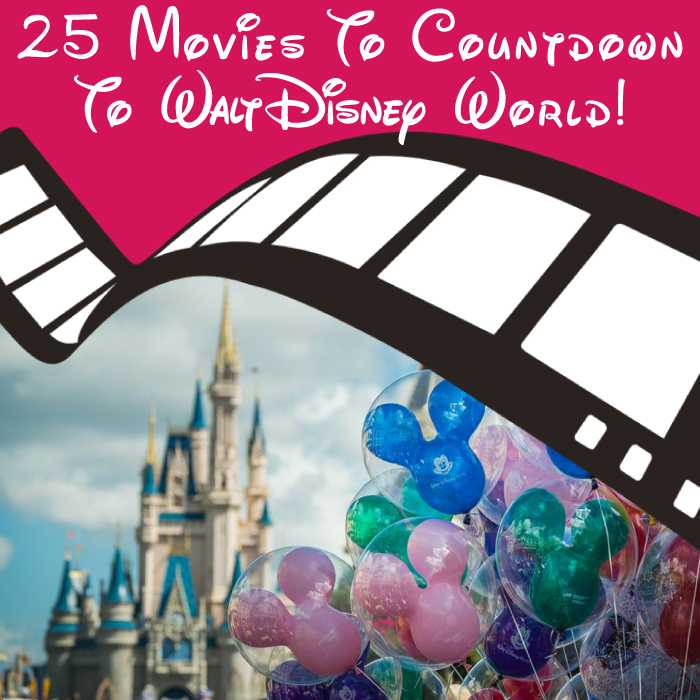 If you’re planning on going to WDW soon, and are looking for a unique countdown, try this movie challenge!  Whether your family needs to get caught up on the classics or you want to rediscover old favorites, here’s a list of the top movies to watch as you countdown to Disney! There are 25 films on this list, which should be just perfect to get you from that 180 day/Advanced Dining Reservations mark to your departure date if you have a family movie night once a week! Honorable Mentions (check these out if you have the time!)

You’ll find character greetings, shows, parade floats, musical elements, or decor that is influenced by these films and TV shows too – even if they didn’t make the cut to be on our top 25 “must watch” list: The Princess and the Frog, Tangled, Brave, Indiana Jones, Tarzan, Pocahontas, Pinocchio, Fantasia, Sleeping Beauty, Hercules, Mulan, The Three Caballeros, Big Hero 6, Inside Out Elena of Avalor, Sophia the First, Doc McStuffins, and Jake and the Neverland Pirates.

When PANDORA: World of Avatar opens at Disney’s Animal Kingdom, Avatar (and possibly its future sequels) will become required watching!

Head on over to our Facebook page and let us know how your movie countdown is coming along!