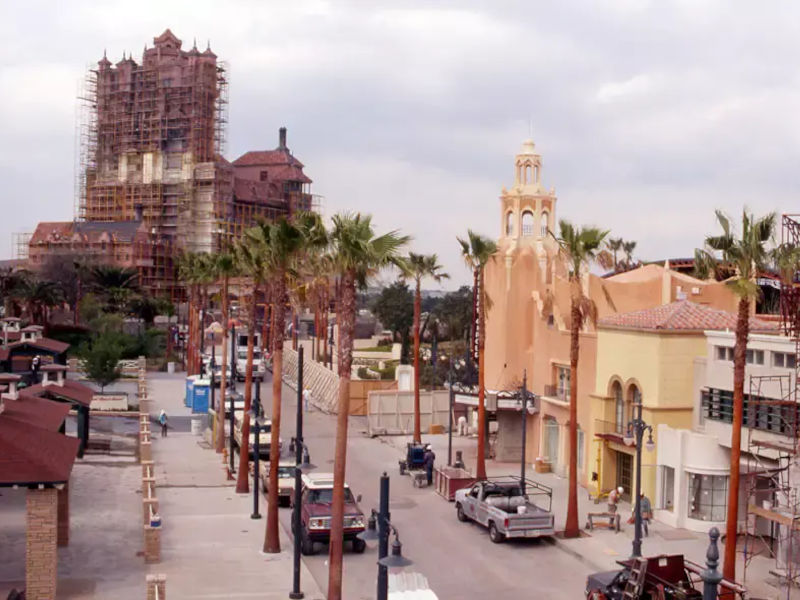 Legal contracts aren’t normally the most thrilling fodder for a story, but the history of Disney-MGM Studios and how it came to be is packed with contract drama and plenty of controversy.

On this date back in 1985, Disney and MGM/UA signed a 20-year contract giving Disney the rights to use the MGM logo and library of films for the upcoming Disney-MGM Studios park. One person who wasn’t thrilled about the deal? MGM owner Kirk Kerkorian. Below, we’ll explore this historic (and controversial) deal and why the park is now called Disney’s Hollywood Studios.

It should come as no surprise that a company founded on films and animation would eventually come to have a movie-centric theme park, but the way Disney-MGM Studios actually came to be may surprise you.

The original idea came from Michael Eisner, who became CEO of the Walt Disney Company in 1984 following a career with TV networks. Prior to making the move to Disney, Eisner was CEO of Paramount Pictures, and his past experience has included roles with networks like ABC, CBS, and NBC. Earfful Tower at Disney-MGM Studios ahead of the debut of Fantasmic! Photo courtesy of Disney

As such, getting Disney theme parks more involved in the world of TV and movies was top of mind for Eisner. The original concept for what would eventually become Disney-MGM Studios was to include a movie-themed pavilion as an expansion of EPCOT.

When Imagineers continued to develop plans for the pavilion, Eisner realized that they had enough concepts to fill an entire theme park of its own, leading him to announce the development of the third theme park at Walt Disney World the following year in 1985.

Creating Disney-MGM Studios came with a few hiccups along the way. First, the park’s design process and eventual construction was rushed and adjusted to open on a smaller footprint with fewer attractions than originally anticipated to keep up with the competition. (Universal was building their movie theme park at the same time.)


Then there was the issue of rights and contracts. With the park’s theme paying homage to the Golden Age of Hollywood, Disney sought to be sure that all kinds of classic films and iconic movie moments would be represented in the park, not just those from within the Disney catalog. As a result, Disney made an agreement with MGM Studios to allow Disney to use logos and films in the creation of the park. The Disney team was thrilled that MGM department heads agreed to a deal that only had the theme park company paying a small usage fee—and that gave Disney a great deal of control over how various IPs would be represented in the park.

But then MGM owner Kirk Kerkorian was not so thrilled. Kerkorian had not been made aware of the transaction until everything was signed and it was too late to make any contractual changes.

Kerkorian’s view of the project then led to disagreements within the relationship between MGM and Disney—a relationship that was already off to a rocky start—eventually leading to MGM filing a lawsuit against Disney.

In the suit, MGM claimed that Disney could not use their company’s name for movie and TV productions at the park, which led to Disney filing a complaint based on the MGM Grand Adventure Park, which was already being developed in Las Vegas.

There is also irony in MGM taking issue with Disney using the studios in the parks to create films as this was a major draw for guests visiting in the early days of the park. Back then, guests would hear about films being made while on the Studio Backlot Tour. And after this attraction, they could experience the Great Movie Ride to see how the magic of moviemaking became such an iconic part of pop culture firsthand. The Wizard of Oz scene from the Great Movie Ride. Photo courtesy of Disney

Of course, many of the major issues that would have caused disruptions that guests in the park might notice were ironed out behind the scenes, but it is no surprise that the name of the park would eventually drop any references to MGM.

Disney-MGM Studios had undergone massive transformations on its way to becoming Disney’s Hollywood Studios, and when the time came for the park’s name change, many fans wondered why.

In early promotions for Disney-MGM Studios, Michael Eisner himself mentioned that Disney had rights to MGM properties perpetually, but according to the terms of the contract this was not the case.

While there are multiple reasons for the name change, and for the reimagining of the park into the experience we see today, the most simple is that the partnership was based on a 20-year contract that expired in 2005.

As the end of the contract drew closer, Disney was granted an extra couple of years to use the name and logos while changes for the park were still in development. By the end of 2007, many areas of the park that mentioned MGM had their signage updated, and the park was rebranded “Disney’s Hollywood Studios” in 2008. Of course, Disney shared an official update on the park’s renaming, with then president of Walt Disney World Meg Crofton saying, “The new name reflects how the park has grown from representing the Golden Age of movies to a celebration of the new entertainment that today’s Hollywood has to offer—in music, television, movies and theater.”

The park has changed a lot over the years, especially recently with the opening of immersive areas like Toy Story Land and Star Wars: Galaxy’s Edge that place guests within the world of these movies rather than as onlookers seeing them in creation.

Where Guests would once see Residential Street on a backlot tour, or stroll the Streets of America during real film productions, they can now be fully immersed into the worlds of iconic movies for themselves.

Looking for a bit of the “original” Disney-MGM Studios? While it was not quite ready for opening day, the Indiana Jones Epic Stunt Spectacular is the only remaining attraction from 1989 when the park opened that guests can experience today.