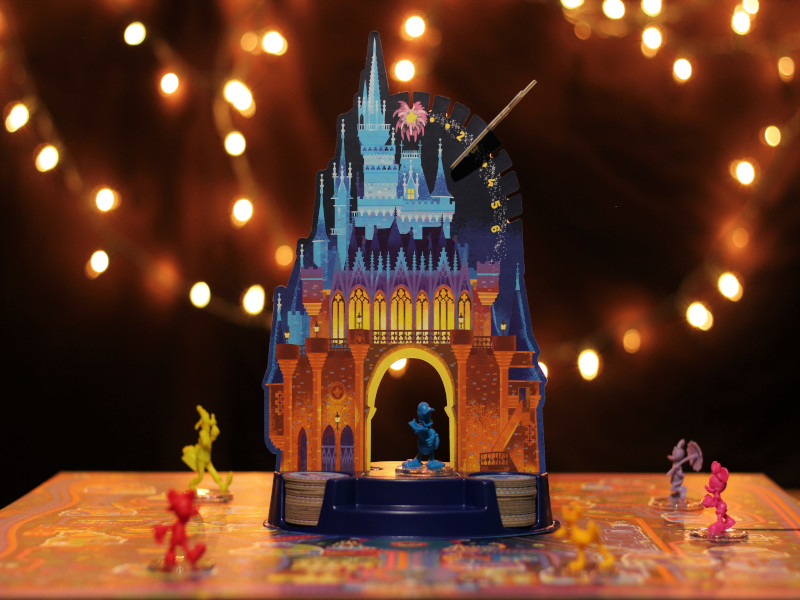 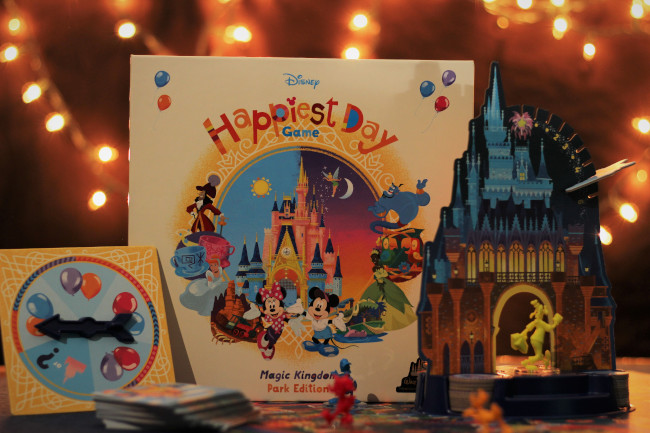 Do you love visiting the Magic Kingdom? Wish you could return there more often? Here’s an easy way you can come back to your favorite park attractions whenever you want: a board game!

Disney Happiest Day Game is a new release from Funko Games, a publisher of many Walt Disney World-themed titles in recent years. This latest game invites you to gather with your family around the dinner table and visit your favorite places in the Magic Kingdom.

I received a copy of Disney Happiest Day Game from Funko Games and shared it with some of my friends and their children. It’s designed for 2-6 players who are at least five years old. Here are my thoughts on the board game and if you should buy a copy for your family.

Begin your escapades in the Magic Kingdom by placing the board daytime side up (yes, the board is two-sided!). You’ll notice that the map of the park is divided into five districts, and dozens of recognizable things are scattered throughout — everything from Storybook Circus to the Hitchhiking Ghosts.

Your goal is to earn the most points by visiting attractions and finding characters around the Magic Kingdom. 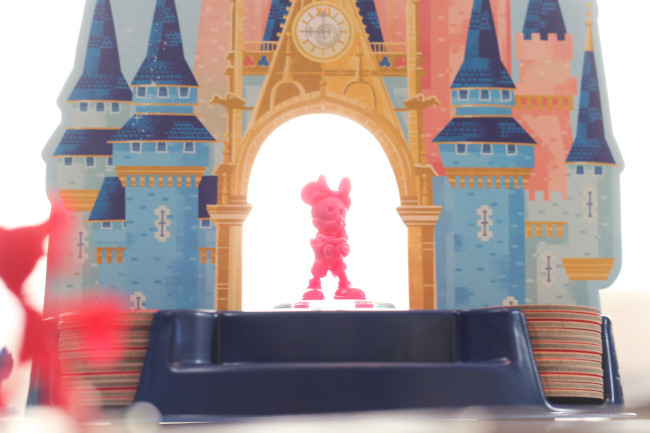 Everyone starts at Cinderella’s Castle, so choose your favorite character — Mickey, Minnie, Daisy, Donald, Pluto, or Goofy — and place their figurine under the immense archway at the center of the board.  Then, receive your starting hand of cards that display your target places to go.

On your turn, flick the spinner and collect the colored balloon tokens shown. You’ll then spend these balloons — and any you’ve kept from prior turns — to move around the park. Each colored balloon allows you to travel along a single track segment of the matching color.

Once you reach the location matching a card you possess, you’ll add it to your points pile to count at the end of the game. 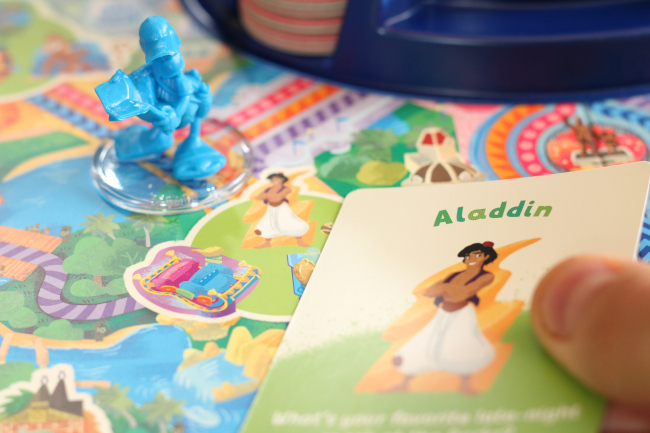 Aladdin is one of the locations and cards you’ll find in the game. Photo by Aaron Widmar

If you use the train to move along the outside of the board or are at Cinderella’s Castle, Tinkerbell climbs one notch higher on the building’s tallest spire. Here’s the twist: When Tinkerbell reaches the top, the game doesn’t end; it becomes nighttime. It’s time to flip the board over!

In addition to the colors changing, all the pathways change at nighttime, so you’ll have to rethink your routes. Good luck!

Once Tinkerbell scales the castle again, the game ends and everyone counts up their points. Who among you is the happiest person that visited most of their favorite places in the park? 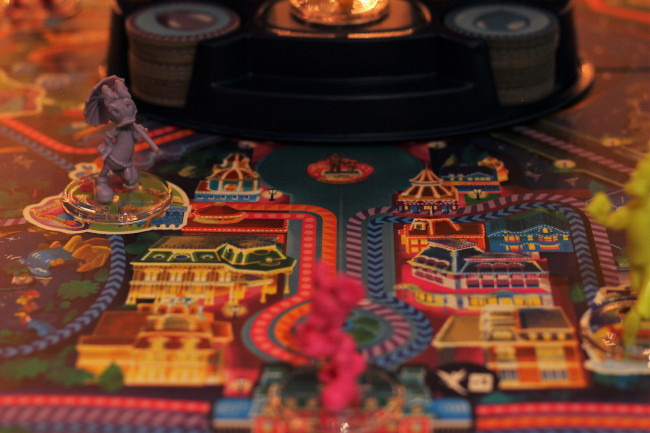 The game board is colorful and bustling. Photo by Aaron Widmar

My personal thoughts on the game

What I love most about the Happiest Day Game is that it incorporates so many attractions and characters from the Magic Kingdom. The artwork is charming, and I love the depictions of characters, structures, and scenery at the park.

The board is even laid out like the park’s actual map, showing Fantasyland (pink), Tomorrowland (blue), Frontierland (orange), Liberty Square (blue), and Adventureland (green) — with Cinderella’s Castle towering above in the center. 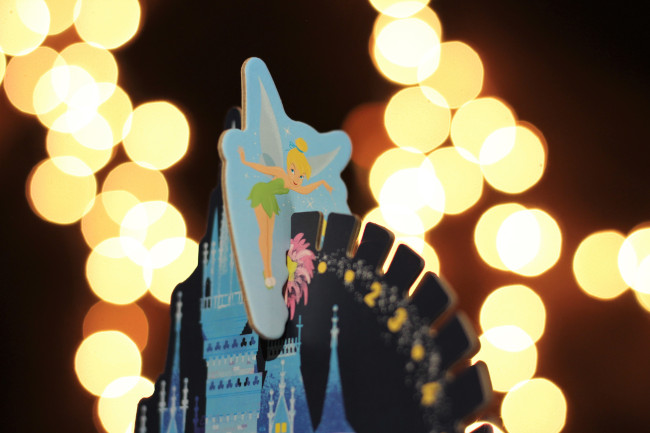 The game changes in a big way when Tinkerbell reaches the top. Photo by Aaron Widmar

A unique element of Disney Happiest Day is the discussion questions on each of the target destination cards. At times, players will have to answer questions like:

These questions aim to spark conversation and shared reminiscence among the group, which is not something most children’s games do. They’re clearly written for families who have visited the park in person enough to recall these experiences. 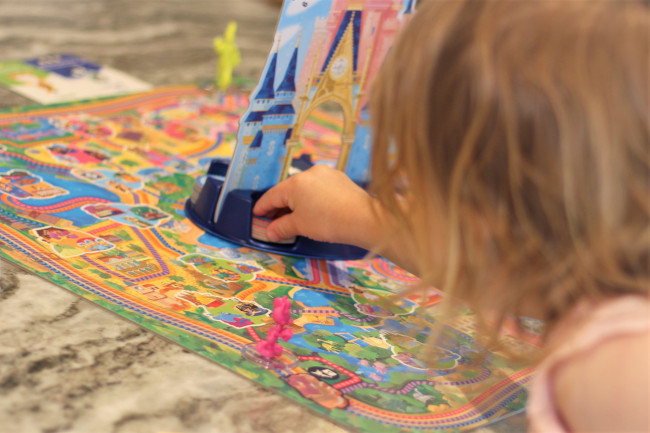 Here’s another caveat with this game: We found it to be a bit too complex for the minimum recommended age.

Each turn consists of multiple stages that can make it feel complicated for younger minds. You’ll need to walk your child through step by step instead of letting them play their turn independently.

So don’t assume that just because the box says “Ages 5+,” the game will be suited to every five-year-old. It could be more appropriate for your seven- or eight-year-old who are more skilled at higher-level thinking to answer questions involving geographic recollection and preference assessment from memory. 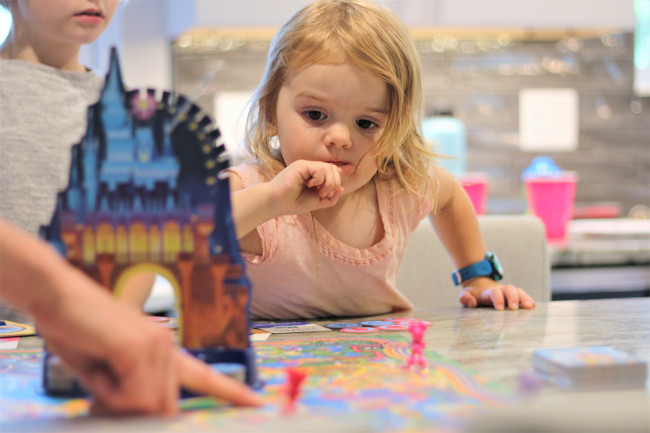 This is a fun, challenging game for kids 5 and up. Photo by Aaron Widmar

On the flip side, Disney Happiest Day Game does introduce some important board game mechanisms like hand management and route planning. These are widespread elements of many grown-up games, so this can provide a stepping stone for introducing your child to more advanced games down the road.

Who would enjoy the Happiest Day Game?

Unlike other Disney Park-themed Funko Games that are made for wide appeal, this is one I’d recommend only to families who are familiar with the Magic Kingdom directly and who physically visit the park with their children often.

Disney Happiest Day Game promises a charming time for families who visit the Magic Kingdom together frequently, like annual pass holders or recurring seasonal visitors. This product could be a nice memento of your times at the park — more so than a board game that you’d break out often for the experience of actually playing it. 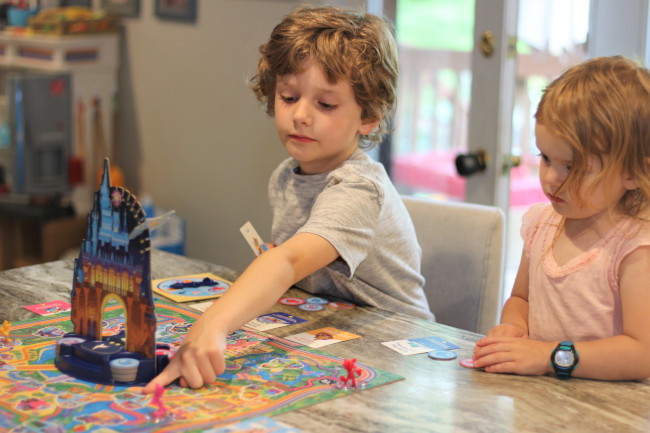 Disney Happiest Day Game is as close as you can get to WDW from your living room. Photo by Aaron Widmar

I’d recommend other Funko board games over this if you’re looking for one suitable for five-year-olds, like Hidden Mickeys or It’s a Small World!, which share many similarities with Disney Happiest Day Game.

Still, Disney Happiest Day Game may be the perfect game for your particular crew of park frequenters. If you visit the Magic Kingdom often, this may be a great buy for you — especially since it’s celebrating Walt Disney World’s 50th anniversary.