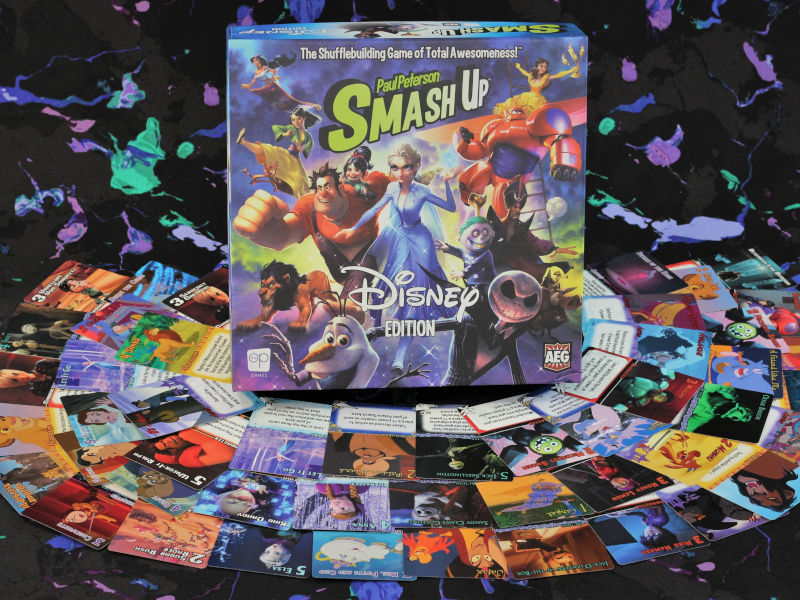 It’s exhilarating to see your favorite superheroes or video game characters gather together—especially if they partake in an epic brawl. How can you not geek out at those moments? Everyone loves a good crossover!

Disney fans especially enjoy these magical meetings. Many people love the Oh My Disney scenes in Ralph Breaks the Internet, and you can’t forget about the Disney Mirrorverse mobile game—but there are far more instances than that. Believe me, I used to avidly watch House of Mouse!

Want to stage your own epic Disney team-up? Here’s an easy way: Buy a copy of Smash Up: Disney Edition.

Board game publishers AEG and The Op have teamed up to create a new licensed release of Smash Up that features eight beloved animated Disney movies: Aladdin, Beauty and the Beast, Big Hero 6, Frozen, The Lion King, Mulan, The Nightmare Before Christmas, and Wreck-It Ralph.

I received a copy of Smash Up: Disney Edition and couldn’t wait to stage a truly tremendous tabletop tussle with my favorite childhood characters. Before I share my thoughts on this new Disney-themed version of Paul Peterson’s Smash Up, let me summarize how it plays in case you’re not familiar with this geek-tastic card game. 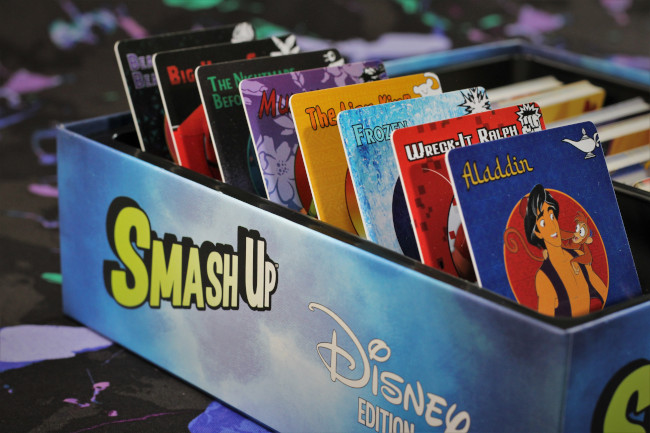 Eight sets of Disney movie characters appear in this version of Smash Up. Photo by Aaron Widmar

How to Play Smash Up: Disney Edition

The toughest decision you need to make in Smash Up: Disney Edition occurs before you even begin playing: Which two factions are you going to choose for your team-up?

You can select two of these eight Disney squads to form your team—or combine one Disney faction with any other Smash Up faction. Considering there are nearly 100 factions in the Smash Up universe, you won’t run out of possible combinations!

Whichever duo you choose as your pairing, you’ll take both corresponding card decks and shuffle them together to create your own dedicated pile.

Once every player has mashed their factions together and formed their decks, it’s time to see which terrific team-up will be triumphant. 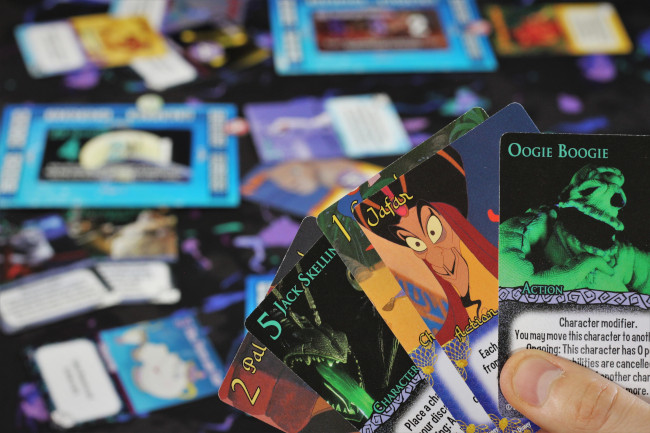 This sample faction includes characters from Aladdin and The Nightmare Before Christmas. Photo by Aaron Widmar

On your turn, play two cards from your hand: an action card and a character card (or two of the same type). Action cards provide a powerful single-use or ongoing benefit, while character cards deploy to bases like the Enchanted Castle.

Your goal is to be the first player to earn 15 victory points. How do you gain VPs? By controlling bases at crucial times.

The more characters you have on a location—and the more powerful they are—the more points you can earn. Once enough characters gather at a location, it will cross a threshold. Count up each team’s strength and award points to the top players.

Thus, every round involves deploying your characters to these battlegrounds, utilizing their abilities and special actions to maximize your presence while diminishing your opponents’. 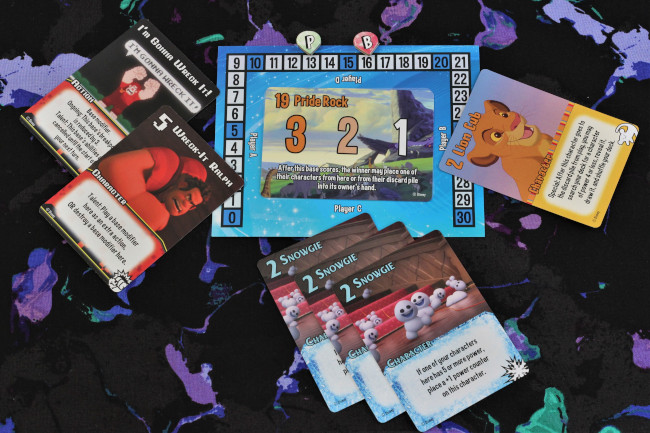 Pride Rock serves as a battleground. Disney fans will find several other familiar places embedded within this card game. Photo by Aaron Widmar

If you’ve already been intrigued by the mere concept of Smash Up: Disney Edition, I won’t have to explain this card game’s appeal. It’s basically a big fan-fiction brawl.

Each faction has a different specialty that makes their approach to winning a bit different—and these have clever thematic roots. For example, The Lion King characters become stronger when other characters (like Mufasa) get discarded. Aladdin’s Magic Carpet moves characters to different locations. It’s a blast to maximize the interplay between faction styles to achieve a massive accomplishment and a windfall of points.

And, the narrative context that these characters carry results in some very memorable events. In one playthrough, I had Jack Skellington wear Yokai’s mask to control a swarm of microbots and take control of the Sultan’s Palace. Just picture how awesome that scenario would look! 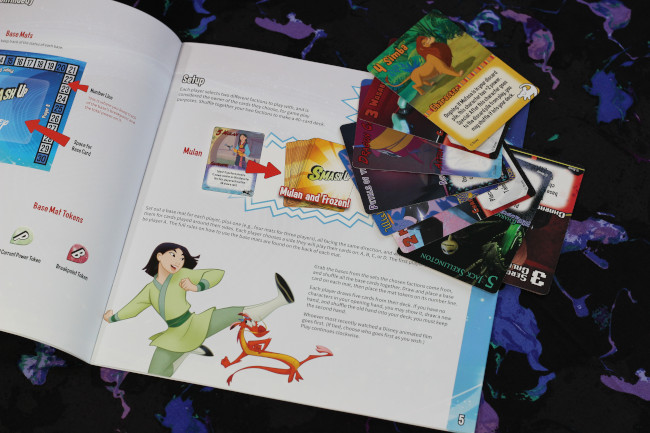 Smash Up: Disney Edition is a big fan-fiction brawl. Photo by Aaron Widmar

The predominance of factions from 1990s Disney movies shows that this was made for adults like me who grew up during that period. It would have been nice to have a film from the Golden Age included, though, such as Fantasia or Snow White and the Seven Dwarfs. Maybe those will come in a future expansion?

I also would have liked to see original artwork on the cards instead of still frames from the films, but I understand how much work that takes. Nevertheless, seeing characters like Olaf and Cogsworth depicted in fight stances (as they are on the box cover) would’ve enhanced the immersion. 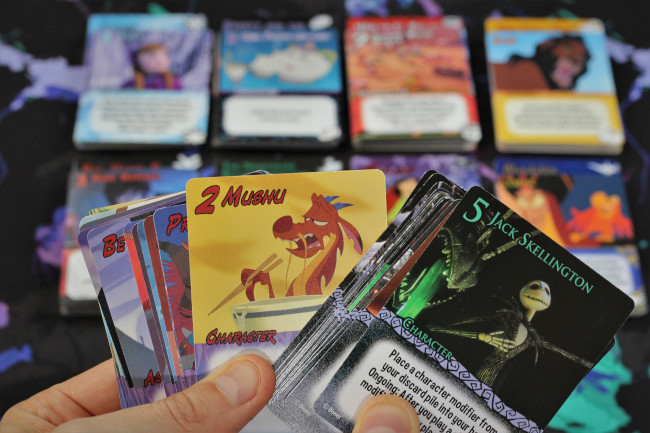 Is this a winning hand? Photo by Aaron Widmar

For You Smash Up Familiars Out There …

What if you’re already a big fan of Smash Up? Then buying this new Disney-themed set should be a no-brainer!

The fun of being a Smash Up devotee is filling your Big Geeky Box with all the newest factions—and these eight Disney additions shouldn’t be passed up.

The ongoing replayability comes from integrating factions from different sets, and these Disney teams provide even more pairing possibilities. You can make analogous combinations like Frozen and mythical horses; or, go nuts with a wacky pairing like Mulan and zombies. And don’t forget to make other Disney crossovers with factions from Smash Up: Marvel.

This release adds something new to the game: location mats to keep ongoing count of each base’s current power total and breakpoint. It’s a useful addition for Smash Up regulars. But, solid cubes and thicker mats made of heavier cardboard would’ve been worthwhile since these components are easy to bump out of place. 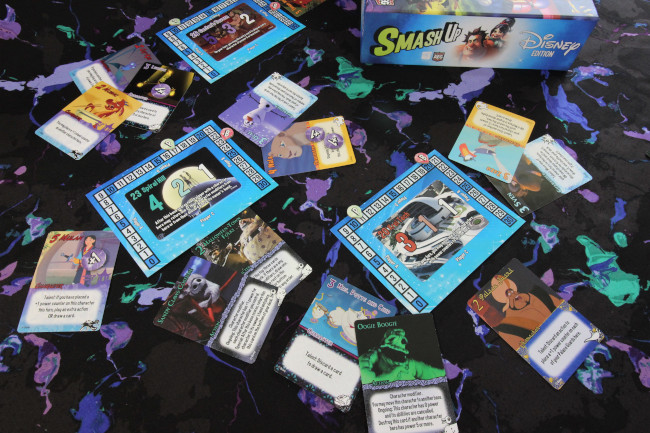 Location mats are a nice addition. Photo by Aaron Widmar

Smash Up: Disney Edition Review: Let’s Get Ready to Rumble!

The Op takes familiar games that people love—like Monopoly and Clue—and gives them a Disney-themed treatment. So, it’s exciting that this publisher has produced a Disney release made for adults—especially ones in the gaming community.

If you’ve been curious about Smash-Up, this is a good entry point into the series. Smash Up: Disney Edition shares all the same rules and keywords as the other releases, so it can teach you the concepts and feel to see if it’s your kind of game. 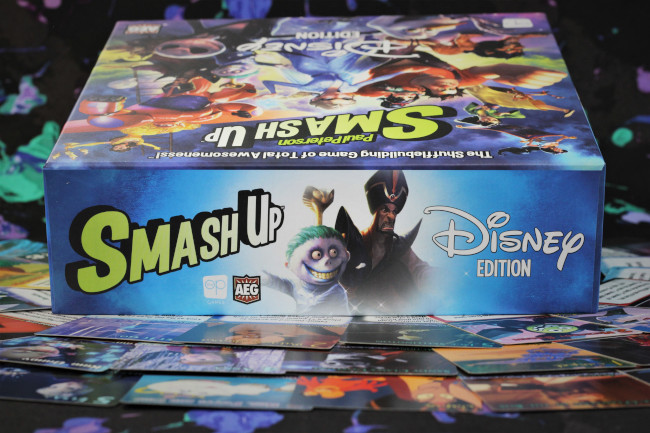 Smash Up: Disney Edition is a great choice for Disney fans and gamers alike. Photo by Aaron Widmar

As an enthusiastic board gamer and Disney devotee, I was overall pleased with Smash Up: Disney Edition. It utilized each of the included movies well and smoothly integrates with the distinctive Smash Up play style. While I would have liked to have higher quality in the artwork and component production, I am happy to add these eight new factions to my roster and create more zany team-ups in the future.