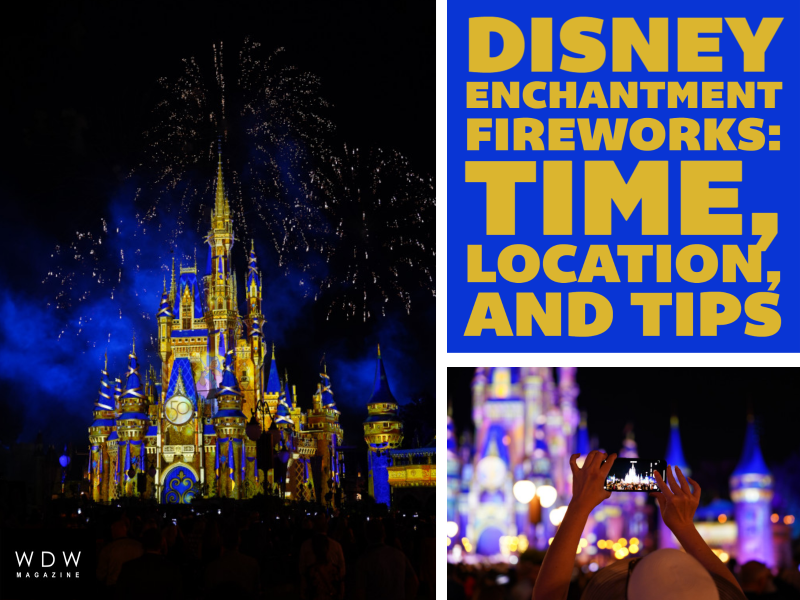 Get info on the new Disney Enchantment fireworks time and location, plus tips for a successful viewing experience of Magic Kingdom’s latest nighttime fireworks spectacular.

Disney Enchantment is the newest fireworks show at Magic Kingdom, which debuted on October 1, 2021, in honor of Walt Disney World’s 50th anniversary. With big shoes to fill following its much-loved predecessors, Wishes and Happily Ever After, the Disney Enchantment fireworks show uses the most stunning projection technology to be seen at Magic Kingdom, lighting effects all the way up Main Street, U.S.A., a fabulous soundtrack, and a lot of fireworks to give guests that perfect “kiss goodnight.”

Of the three new shows to debut this month, I was most curious to see KiteTails and Harmonious, simply because they promised to be so unique. But this update to the classic “fireworks above the castle” show that Disney is known for really took my breath away.

I was lucky to see a special media preview of Disney Enchantment before it’s official launch (thanks, Disney!) during a rededication ceremony that featured Bob Chapek, Bob Iger, and even a special performance by Christina Aguilera. But two nights later I was back to see it on my own, and loved it just as much from a viewing spot tucked away in Tomorrowland.

This show is that good: You don’t have to watch it from the hub grass with the crowds; it’s powerful enough to watch throughout the Magic Kingdom or even from neighboring hotels on the Seven Seas Lagoon! 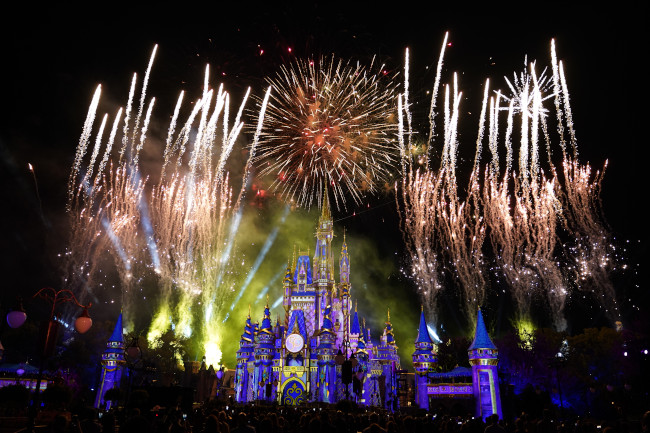 Want more of an inside scoop on everything Disney World 50th? Our January 2022 issue will celebrate the 50th anniversary at Walt Disney World, plus our 100th issue as a magazine! Subscribe by the end of the year to make sure you get your copy of this sure-to-sell-out issue. Just $8/month! 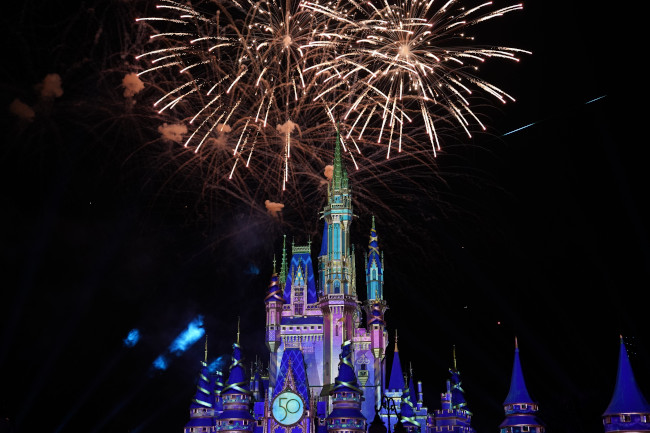 Everything you need to know about Disney Enchantment at Magic Kingdom, the TL;DR version:

What Movies and Characters Are in Disney Enchantment? 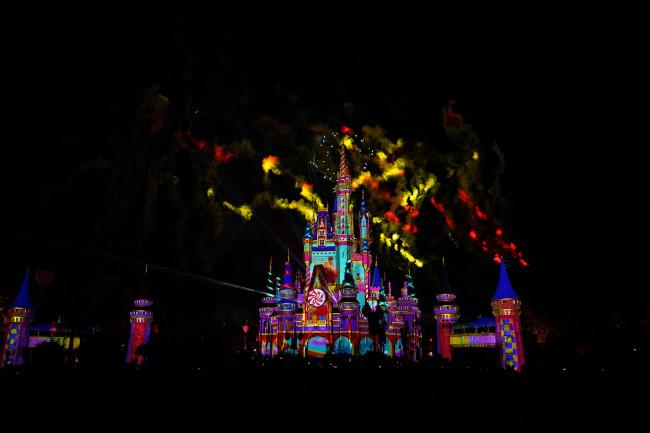 Great question, and I’m glad you asked, but it might be easier to list the films and characters not in Disney Enchantment!

Music in Disney Enchantment includes an incredible original song called “You Are the Magic” that will have you humming along for the rest of your trip, plus these hits: 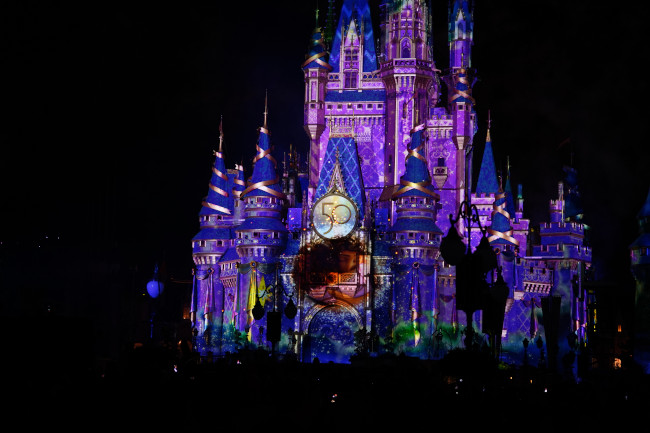 You’ll also spot characters and scenes from dozens of Disney and Pixar films, including: 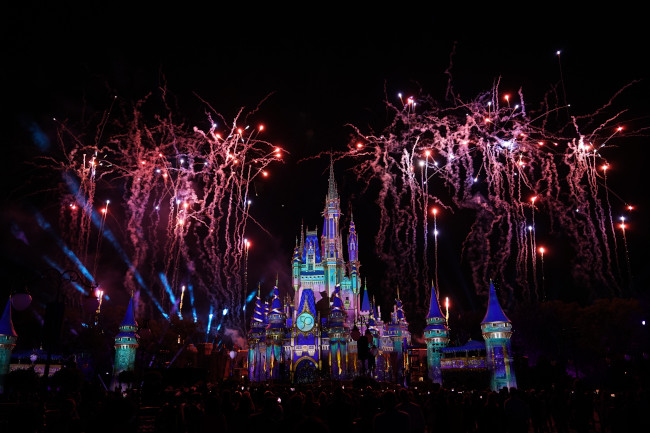 Get our complete review (and all the stunning photos) of Disney Enchantment by subscribing to our monthly print magazine by Dec. 31. January 2022 marks our 100th issue, so we’re celebrating all things Disney World 50th and WDW Mag 100th, including an in-depth look at Disney Enchantment from managing editor Timothy Moore. Subscribe today so you don’t miss it!

So you know when and where to watch the Disney Enchantment fireworks, but how can you make it the most worthwhile experience?

1. Choose the Right Time to Arrive

As of publication, Disney Enchantment is currently offered at 9 PM each day, every day, regardless of day of week. For the most up-to-date Disney Enchantment firework time info, check My Disney Experience the morning of your visit to Magic Kingdom.

But, like most shows at WDW, you can decide how early you want to arrive—and your choice comes with pros and cons in either case.

If you want to scoop up a premium viewing spot, you’ll want to either book yourself a special dining package that includes reserved viewing areas or arrive at least an hour early to stake your claim. That means you’ll get the view you want, but you’ll lose valuable park time (you could always do what I do and combining waiting for the show with a late-night snack!).

Or, you can arrive moments before showtime and “take what you can get.” That means your sight lines won’t be great, but since the show is in the sky that’s not big deal for some. Beware, if the viewing areas in front of the castle and on Main Street, U.S.A. fill up, an announcement will play encouraging you to watch the show from elsewhere—so if that front-of-castle view is important, do plan to arrive early.

Need help planning a dining package? A Disney Travel Agent is your best to getting the plans you want. You can get a FREE quote here. 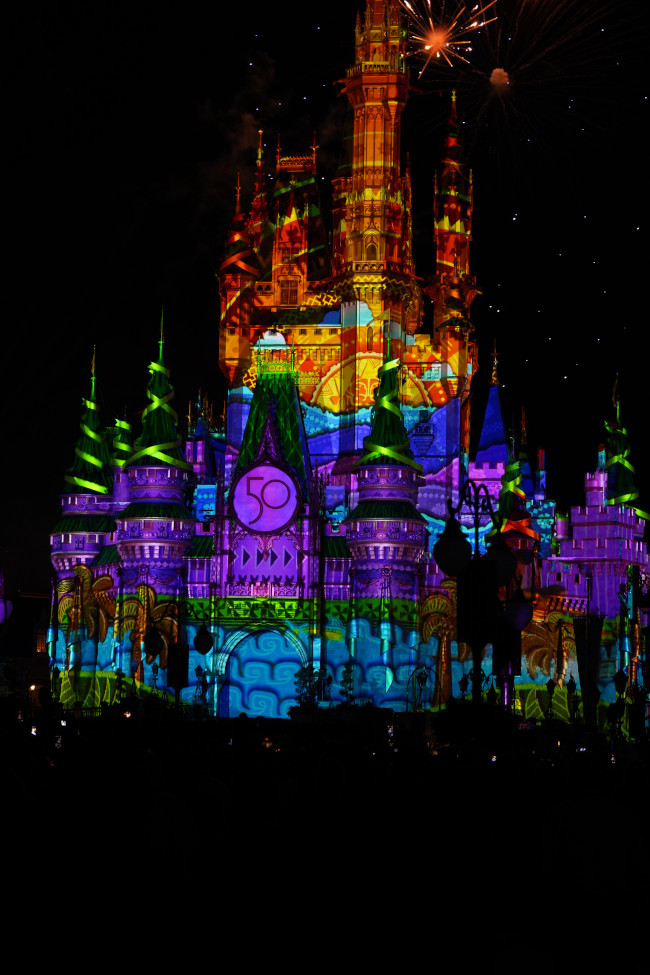 Let’s talk about those viewing locations some more: 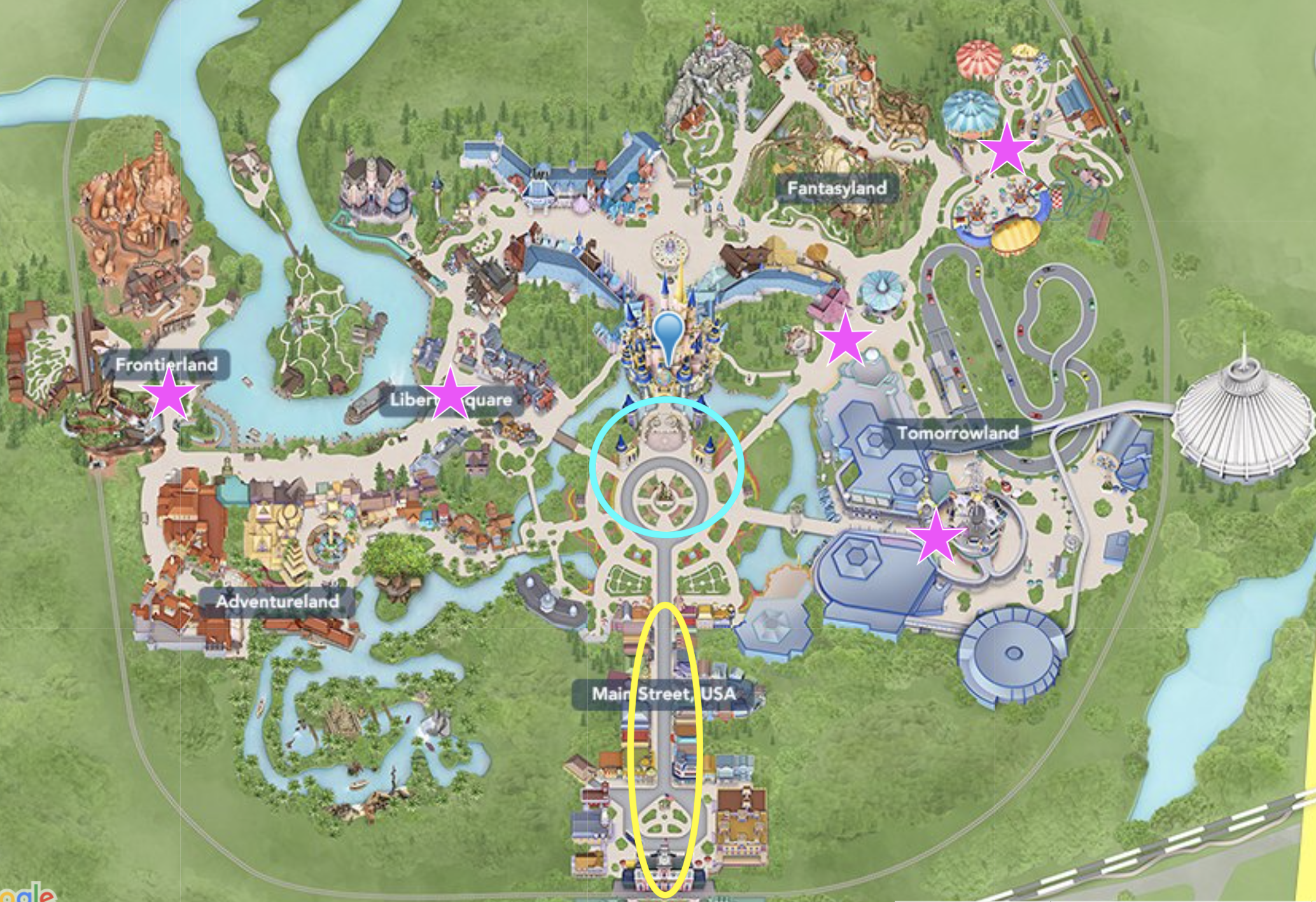 But those aren’t the only great areas to watch the show from inside the Magic Kingdom. I’ve marked five areas with pink stars on the map. These spots provide clear views of the castle top and thus the firework bursts.

You’ll be able to enjoy the park up until showtime, then stop and look at the sky for the show with no wait. And if if the Magic Kingdom is open past showtime, you’ll be first in line for the rides after it’s over! I watched the show from Tomorrowland one night, had a great view, a seat (if you can believe it!), and was first in line to walk on Buzz Lightyear Space Ranger Spin after the show. What a magical way to end the night!

If you’re claustrophobic, trying to practice social distancing, or are worried about getting stuck in a crowd with little ones who are afraid of fireworks, watching from these alternate spots is a great solution. 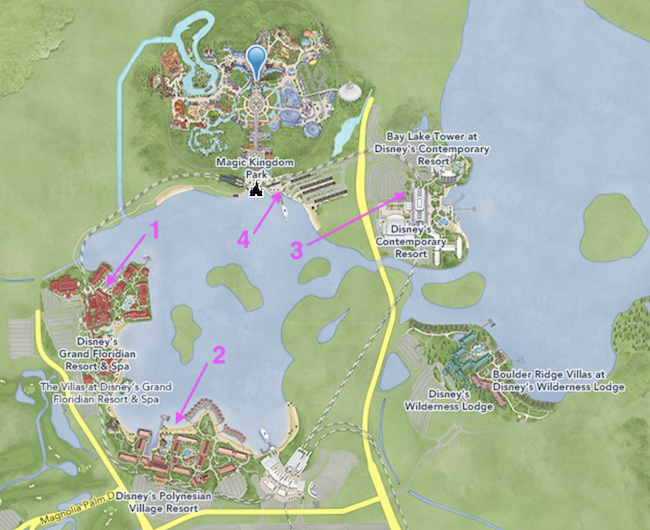 You can even take it one step further, particularly if you or your kids love the look of fireworks but not the booming sounds: Watch from one of the resorts around the Seven Seas Lagoon or even from the ferry and bus loading area outside Magic Kingdom. In the map above, I’ve pinpointed the best spots from which to watch the Disney Enchantment fireworks outside the park.

If you’re not into fireworks, there’s no reason you have to see the show. You can spend the showtime getting on a few rides, shopping in the Emporium with lighter crowds, or even getting a head start on the journey back to your hotel so you have a great sleep and a nice early start in the morning, wherever your journey may take you.

But if you ask me, don’t skip this show! See it at least once—there is nothing more special than watching those fireworks above the castle to give you those Disney nostalgia goosebumps!