Cooking From Disney Movies: Anyone Can Cook This Ratatouille Recipe 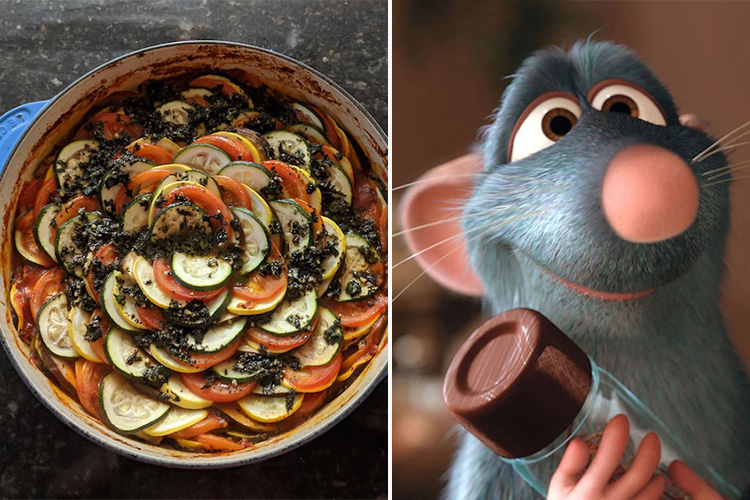 Recently, I’ve seen several posts where people re-create food from their favorite Disney films. I decided to jump on the bandwagon and start making Disney movie food myself! Today, I’m showing you how to make ratatouille from… well… Ratatouille!

We all know movie food always looks amazing, so getting to eat it in real life is a dream come true!

The beautiful swirls and colors in ratatouille really stand out and make your tummy rumble when you’re watching Disney Pixar’s movie about a little rat chef named Remy. 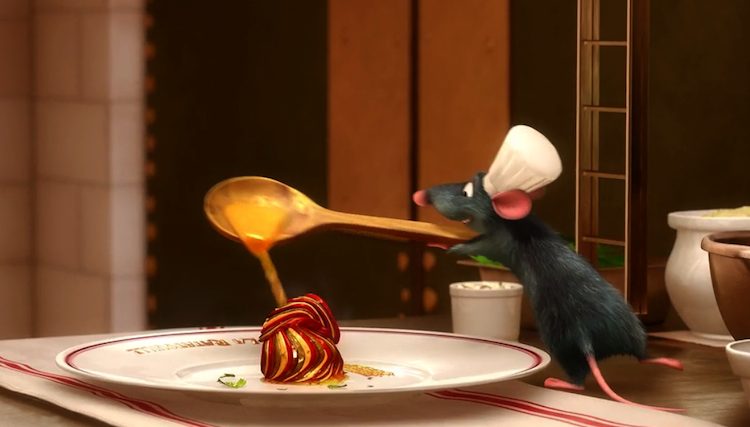 Remy plates up his ratatouille. Image Courtesy of Disney

Really, this entire movie makes me hungry. You’d think the rats might do something to squelch the appetite, but we all know we’d let Remy cook us dinner.

How To Make Ratatouille

I’ve got a huge list of food in Disney movies I could re-create, but ratatouille really called to me. Something about the complexity of the design and the beauty of the dish made me decide to make this dish number one! 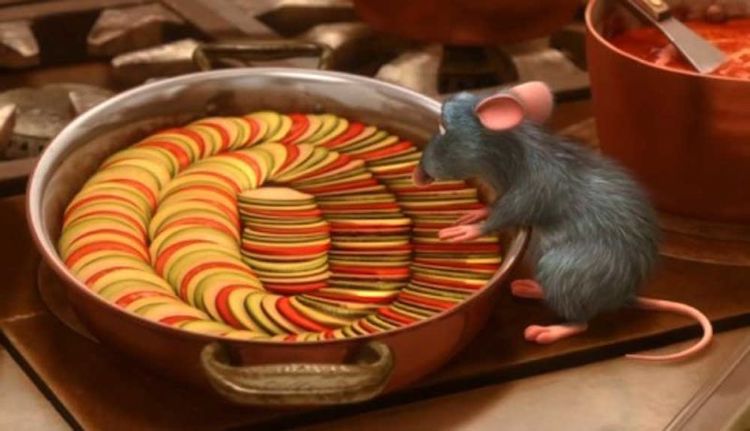 Though the recipe has some somewhat complicated steps (just the assembly), and can be quite time-consuming with all the chopping and cutting, it’s actually a really simple recipe.

If you’re a bit faster and more practiced at cutting up a million veggies, then this will be a breeze!

The recipe I used is from Tasty. You can go read the step-by-step instructions there, but read on for some extra tips and a review of the final result! 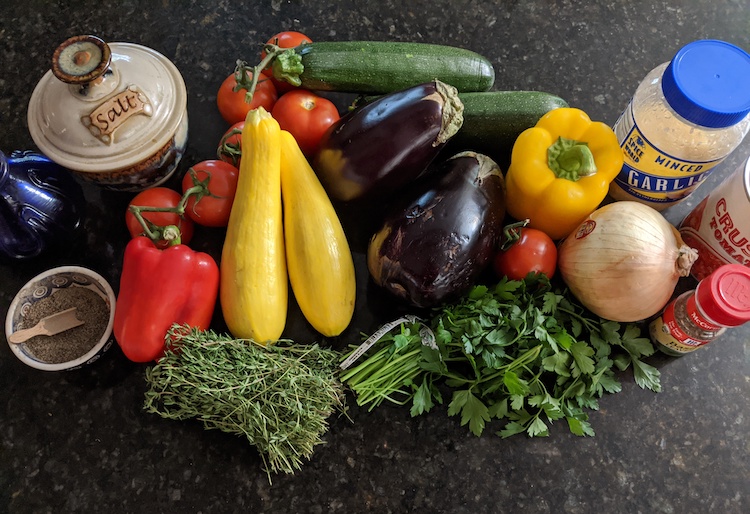 It’s quite a colorful spread! Photo by Leah Sikes

For this recipe, you’ll make have the main veggies, create a sauce, and mix up some herb seasoning. Oh, and you 100% need a large (at least 12″), oven-safe pan.

I got exactly this, but I will tell you I had SO many veggies leftover. If your veggies are on the bigger side, start by chopping up half, and then chop up more only if you need it.

Also, I would recommend trying to find Japanese eggplants, if you can. The size will work a lot better with this dish. However, I used one regular eggplant in mine—I’ll show you how that worked out later.

I struggled to find fresh basil available near me, so I ended up using dried. While I’d highly recommend using fresh if you can, it’s okay if you can’t find it. If you used dried, you can use a little less than the recipe calls for.

All of the above ingredients are repeats from the sauce, just in different quantities.

This step took me the longest! The veggies need to be chopped fairly thin for the presentation, and it’s a little difficult to get that thin precision at a fast speed. 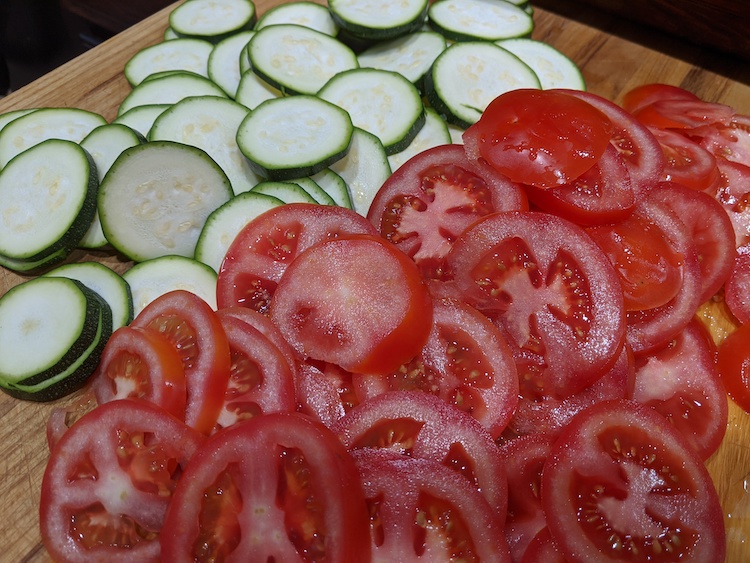 You’ll have huge piles of veggies when you’re done! Photo by Leah Sikes

I didn’t get mine super thin, but I did my best. I messed up a few of them by not getting full rounds, but I was still able to use them.

As I mentioned previously about the eggplant, the rounds ended up way, way bigger than the other veggies.

To remedy this, I just cut my rounds into fourths. I don’t think you can even tell in the final presentation.

You’ll also dice your peppers and onions after you’re done with the eggplant, squash, zucchini, and tomatoes. This goes much faster! 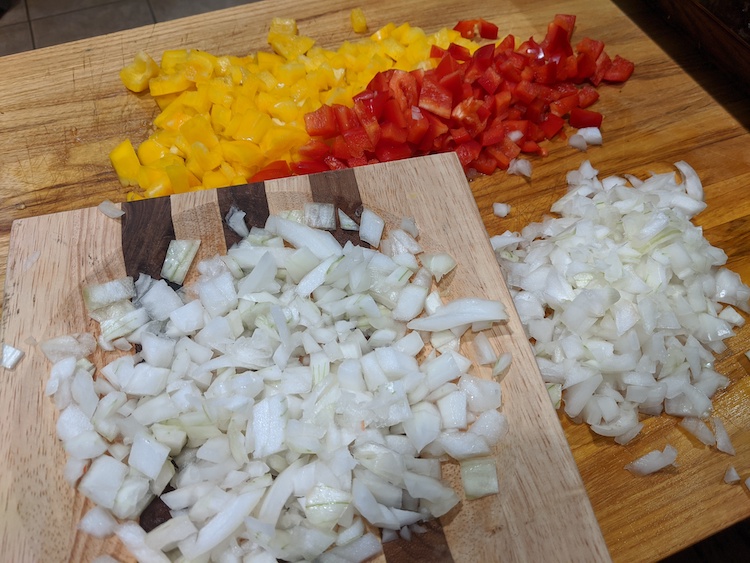 The diced peppers and onions. Photo by Leah Sikes

The next couple steps are really straight-forward.

For the sauce, you’ll sauté the peppers and onions in oil, and then add the crushed tomatoes. 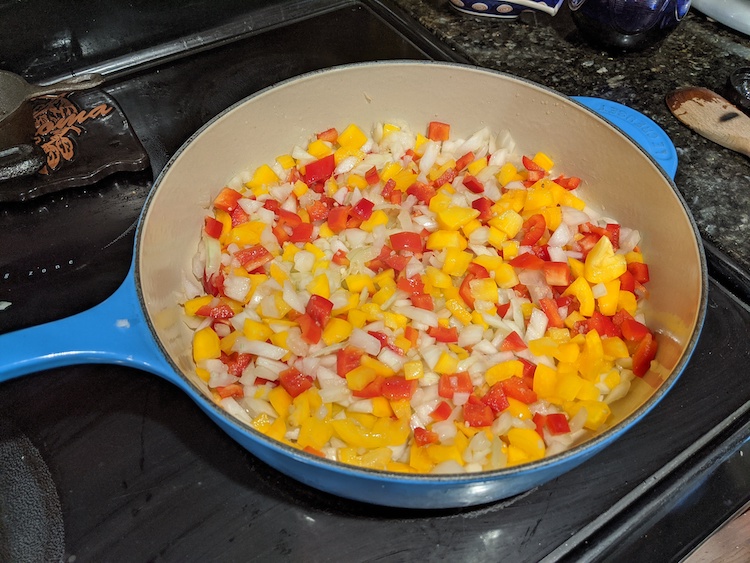 Sauté your onions and bell peppers in oil. Photo by Leah Sikes

I thought I had way too much pepper and onion, but I think the amount ended up just fine once everything reduced. I’m not used to preparing such large meals!

My onion was MASSIVE, so I actually used a little over half of it.

Oh, and your tummy should start rumbling about here. The sauce smells truly amazing!

Mix Up The Herb Seasoning 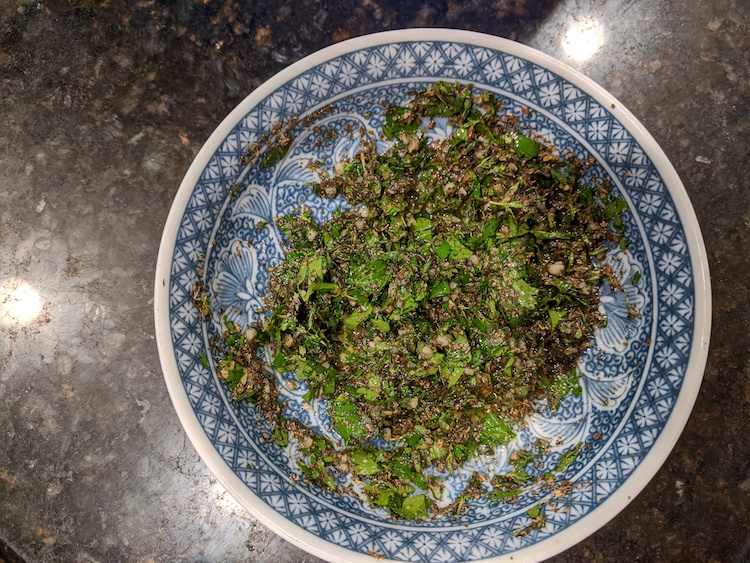 Mix together the herb seasoning!

If you’re using any dried herbs, like I mentioned before, you can use a little less than the recipe calls for. I highly recommend trying your best to get as many fresh as you can, though!

By now, your sauce should be totally ready. The next step is arranging the veggies on top. 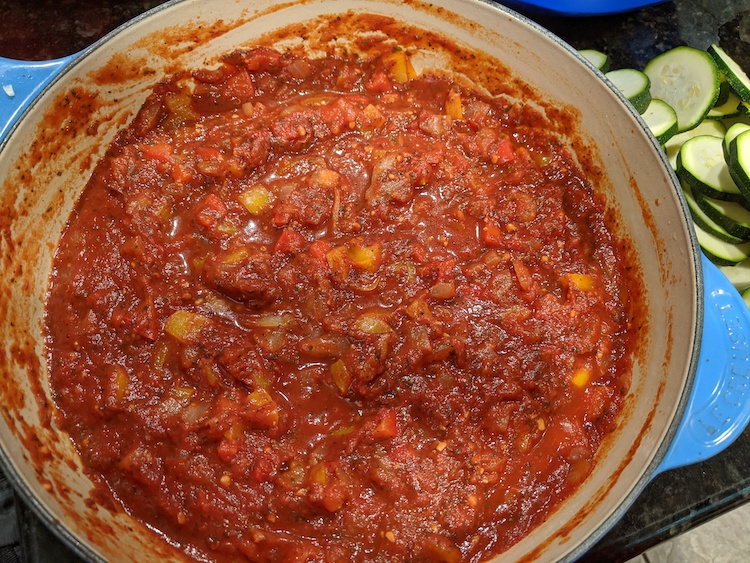 Completed sauce! It looks so tasty. Photo by Leah Sikes

Putting all the veggies in the swirl pattern was kind of frustrating for me.

Basically, you should just make a pattern. Mine was zucchini, tomato, squash, eggplant. Then, you lay it down flat in the pan, on top of the sauce. 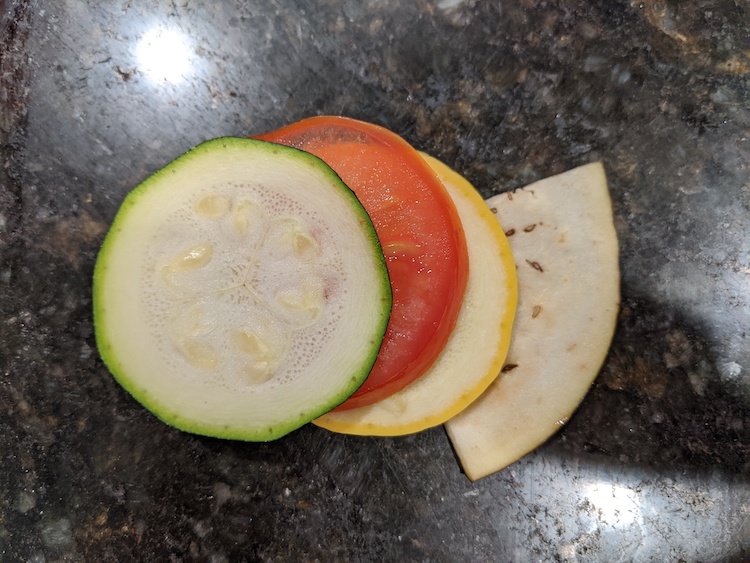 I think it would take me making this a couple more times to really get the beautiful swirl you get in the movie and the Tasty recipe. I did my best, and while I’m not totally sure where I went wrong, I think it turned out pretty in the end anyway.

If you want to, you could try to practice your swirl on a plate before putting it in the sauce. Once your veggies are in, it would be a mess to take them out and start over. 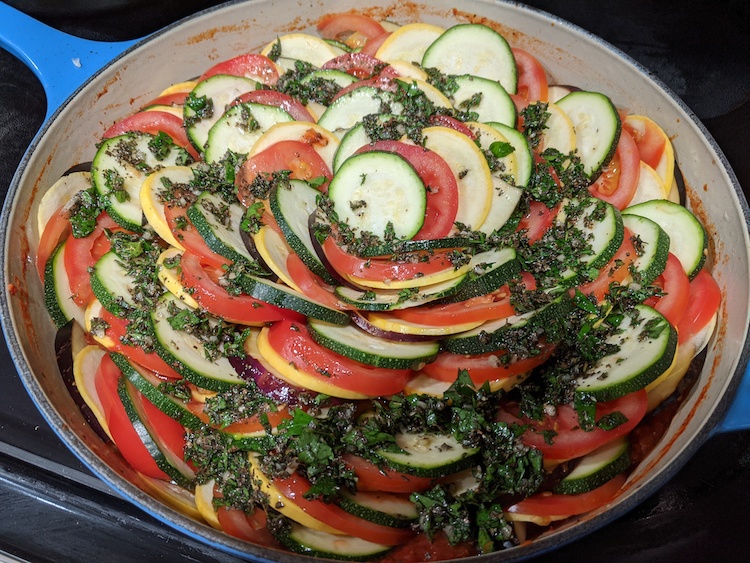 Here it is, before it is cooked, with the herb seasoning. Photo by Leah Sikes

Once your veggies are packed tightly in your pan (I seriously shoved as many veggies in there as I possibly could), cover the top with your herb seasoning.

The next step is easy, and requires hardly any work from you. 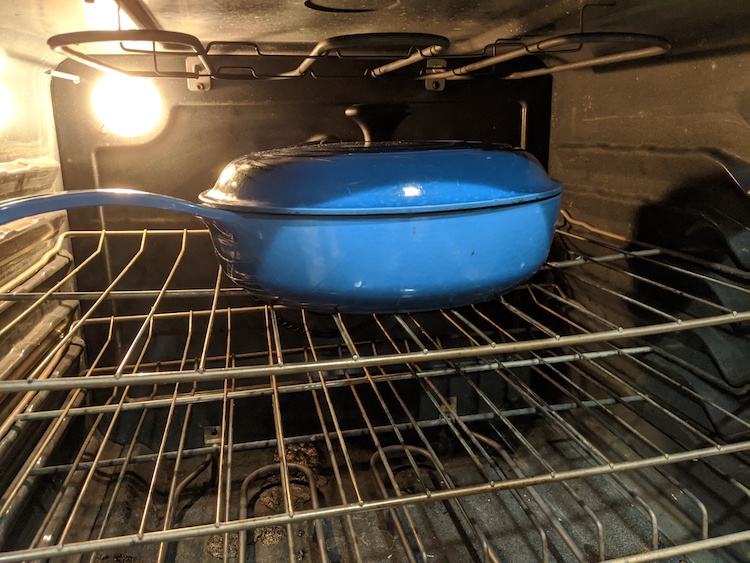 Place the entire pan into the oven, covered. Photo by Leah Sikes

The whole pan goes in the oven, covered (my pan had a lid, so I used that). 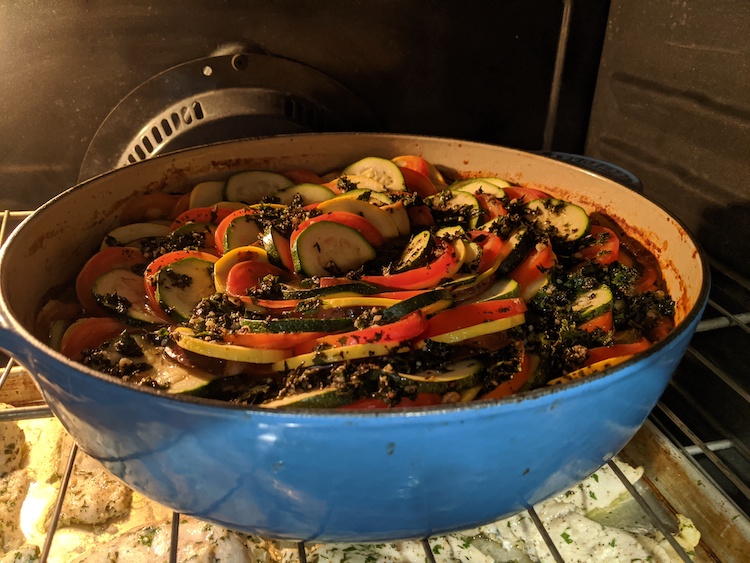 Uncover it for the last 20 minutes! Photo by Leah Sikes

40 minutes later, remove the covering, and let it bake for another 20 minutes uncovered. 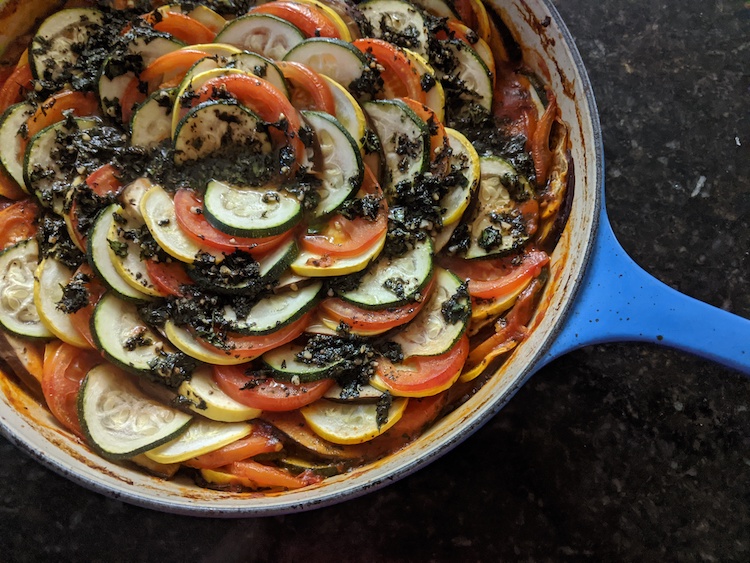 It just looks so rustic and beautiful! Photo by Leah Sikes

I’ll be honest, I wasn’t sure what to expect from ratatouille at all. But man, it was so, so good!

Squash and zucchini aren’t my favorite veggies, and I’d never even had eggplant before, so I was concerned about those flavors.

But because everything was sliced so thin, well-seasoned, and paired with a really delicious sauce, the things I don’t love about squash (primarily texture) didn’t come through at all! 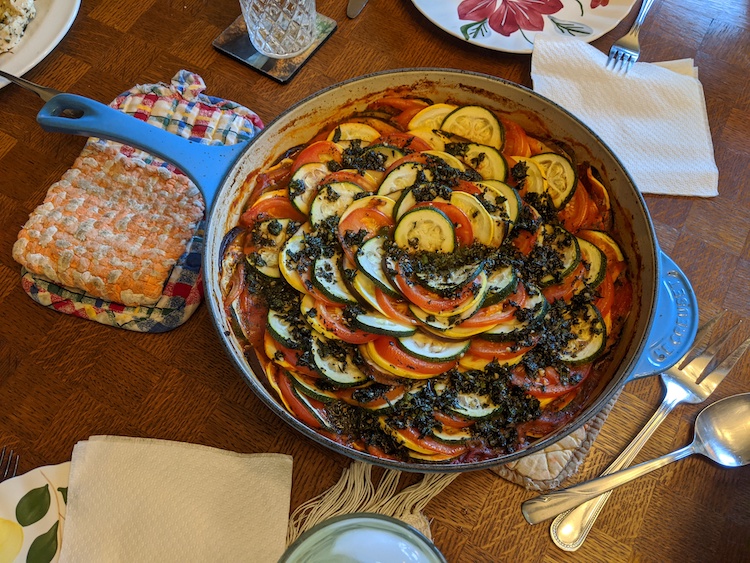 Ratatouille, all ready to eat on the table! Photo by Leah Sikes

I made this for my family of 8, and almost every last bit was eaten. It was totally a hit, and everyone thought it was really good.

Because it’s just a veggie dish, I decided to pair it with baked chicken and rice pilaf. This was a great choice for my family. 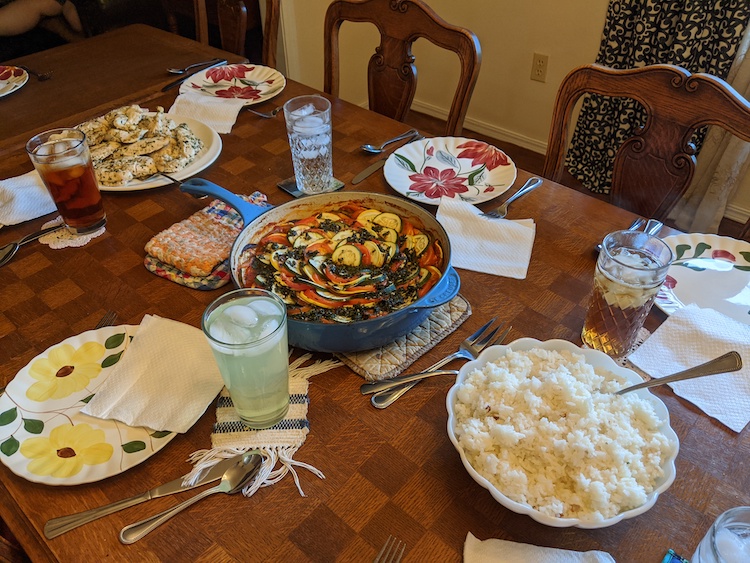 I paired it with chicken and rice. Photo by Leah Sikes

The recipe says it serves 8, but if this is all I’d served to 8 adults, it wouldn’t have been enough. Plus, the chicken and rice paired really well with the ratatouille!

While I won’t be adding this recipe to my regular meal rotation, I would definitely make it again sometime for a more special occasion or when I have some extra time to prepare. 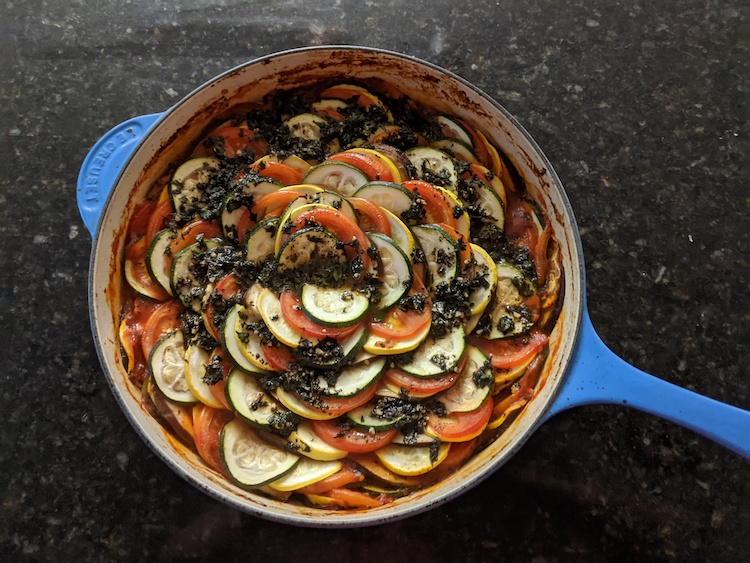 Just one more photo of the final product! Photo by Leah Sikes

Let me know what other Disney movie foods you’d like to see, and maybe I’ll make it next on the blog!

Keep up with our blog for even more Disney recipes and DIYs! Subscribe to our newsletter today.