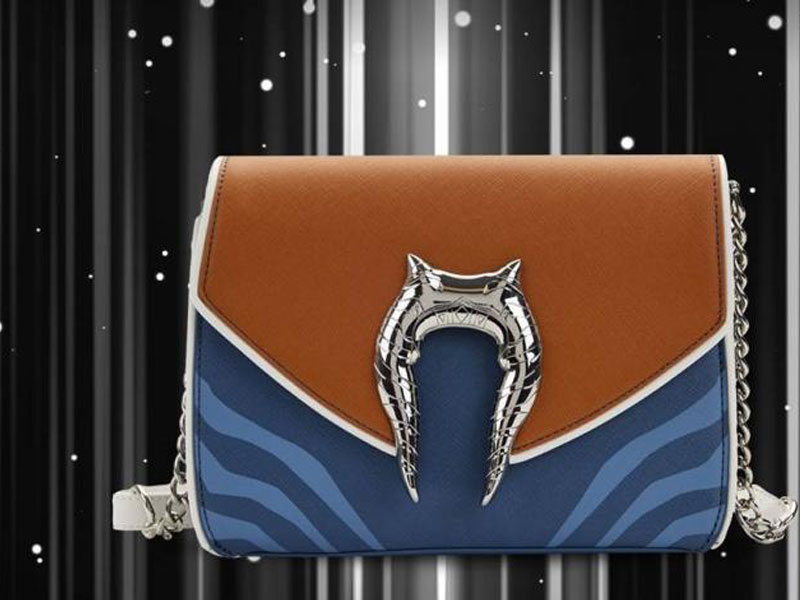 San Diego Comic Con always offers up fans the best new exclusive merch and fun features. This year, Loungefly has dropped several brand-new items that will be available at the Funkoville interactive exhibit at the 2022 SDCC at the end of July.

One of the most exciting drops this year is the Ahsoka Tano bag. This cross-body bag is one of the chicest Loungefly bags that fans have seen so far! The exclusive Ahsoka Loungefly bag will be available at the 2022 San Diego Comic Con. Photo courtesy of Lougefly

The bag features silver hardware on the front in the shape of Ahsoka’s headdress. The bag’s main pocket opens with a front flap and includes brown and blue details designed to resemble the character.

This stylish accessory is made from vegan leather and the strap is part chain, part leather to comfortably rest on your shoulder.

Where to Get It

This Ashsoka Loungefly bag will be a San Diego Comic Con exclusive… for now, at least.

Be sure to stop by the incredible Funkoville interactive exhibit at the con to snag this one-of-a-kind Ahsoka Loungefly bag. San Diego Comic Con runs from July 21-24, 2022.

An Army of Ahsoka Bags

Loungefly makes an array of incredible Ahsoka-themed bags, and fans are eager to see them following Ahsoka’s appearance in The Mandalorian on Disney+. One is the BoxLunch Exclusive mini backpack.

The Clone Wars Ahsoka Tano Figural Mini Backpack is packed with beautiful detail right down to a lightsaber charm on the zipper! The bag depicts a colorful Funkopop-style portrait of Ahsoka, it includes 3D elements of her headtails and tunic on the bag and includes a patterned interior lining.

Ashoka’s headtail stripes are prominently featured on the Convertible Mini Backpack. This handheld bag converts into a mini backpack with straps.

This bag has a metal Star Wars emblem attached to the front, along with laser print patterns, and the classic white, blue, and brown Ahsoka colors. The main compartment is accessible through a magnetic flap.

The Mandalorian Ahsoka & Grogu Mini Backpack is one of a kind. It has a beautiful illustration of Ashoka and Baby Yoda (AKA Grogu) on the front of the bag. Ahsoka is the hero of the Clone Wars and a Togruta female who knew how to use the Force.

She is a former Jedi trained by Anakin Skywalker who helped create a network of rebel troops in order to oppose to Galactic Empire. In other words, she is a true hero!

It will be packed with all sorts of fun surprises, but be sure to stop by Funkoville at Booth #5341, Booth #5137, and Booth#5145 to see the exclusive Ahsoka Loungefly bag, as well as other Loungefly releases.

Sold Out! These Cinderella Loungefly Bags are Instantly Hard-to-Find

Halloween Loungefly Bags Made For Mischief