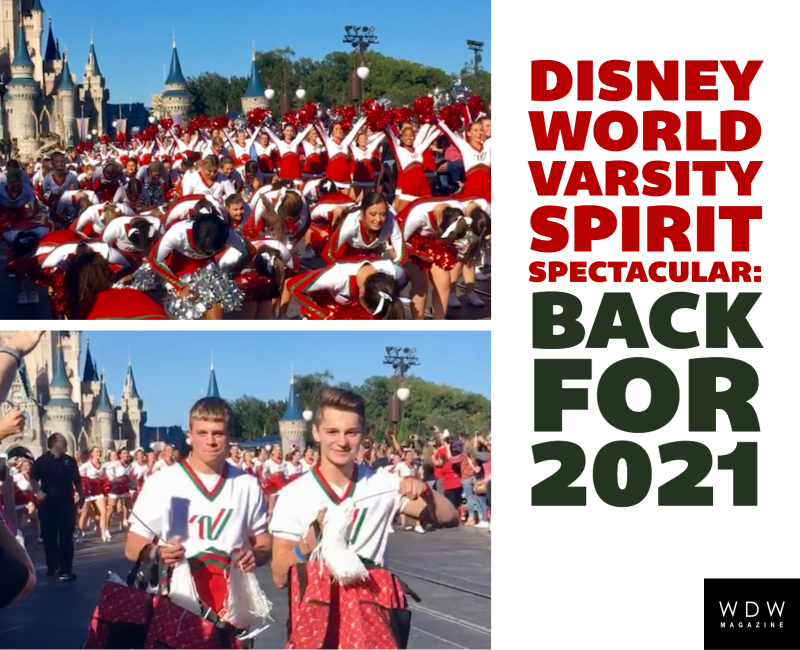 If you’re at Magic Kingdom in mid-November, you may see a parade with hundreds of festively dressed cheerleaders and dancers make their way down Main Street to holiday music. This event is the Varsity Spirit Spectacular at Disney World, and for parents of participating kids, it’s Disney magic at its purest.

The Varsity Spirit Spectacular at Disney World features hundreds of high school cheerleaders and dancers from around the country dancing down the parade route at Magic Kingdom.

In 2016, my then high school cheerleader, Austin, participated in this event. Prior to this, we never even knew of an event where he could be in a Magic Kingdom parade, walking down Main Street with the festive castle gleaming in the background.

Austin is now a college cheerleader in his senior year and highly recommends cheerleaders, especially guys, have this once in a lifetime experience.

Like pretty much everything, the 2020 Varsity Spirit Spectacular was impacted by the pandemic. 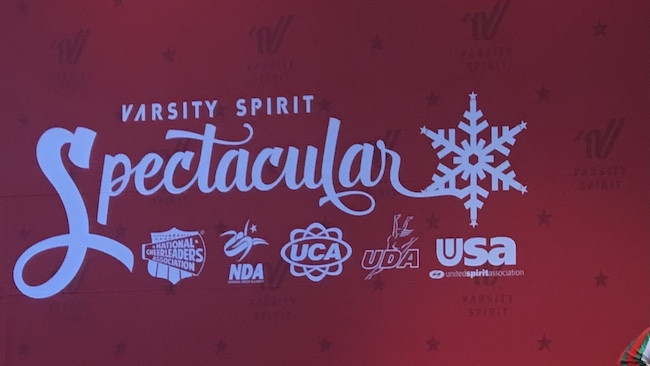 The Varsity Spirit Spectacular Christmas cheerleading experience is back at Magic Kingdom this year. Photo by Trisha Daab

Varsity Spirit Spectacular is an event featuring high school cheerleaders and dancers who are captains, co-captains, and officers for their squad. In matching uniforms, they follow the typical Magic Kingdom parade route with a choreographed dance to holiday music.

Typically, there are under a thousand performers, split into two groups for the two performances. So what you see is about 400 teens dancing down Main Street in holiday colors with festive poms. It’s really quite a sight!

The event is inclusive of all teens but tends to be predominantly girls. The year Austin performed, in 2016, there were 800 kids, about 790 girls and less than 10 boys.

Most of the guys didn’t perform the dance routine and instead got to lead the parade down Main Street and hand out festive pom-poms to guests.

The boys definitely enjoyed that experience!

Getting to see my son with that huge smile on his face, walking down Main Street handing out the poms to guests with the festive colors, music, dancers and Cinderella Castle in the background was an all-the-feels moment!

This was not our first trip to Disney together, but it was the first time it was really just the two of us at one of our favorite places during the most magical time of year. 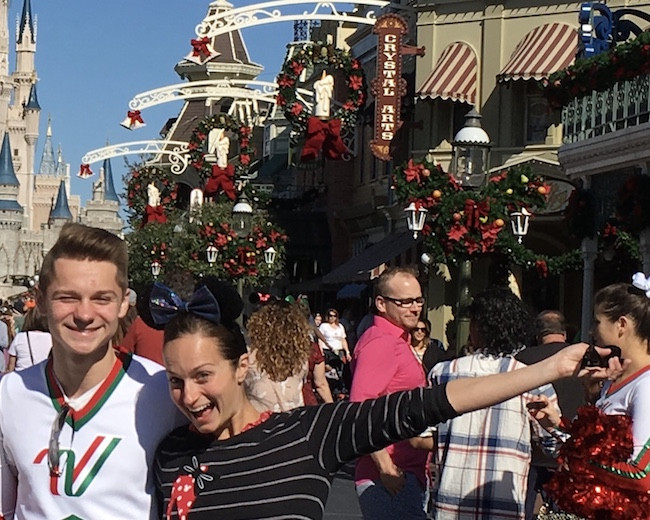 Austin and I love being at Magic Kingdom during the holidays. Photo courtesy of Trisha Daab

A few years later, we were able to do another trip during the holidays for a WDW Magazine event. No parades down Main Street, but we did get holiday treats, and it was Austin’s first time seeing Sunset Seasons Greetings at Hollywood Studios. 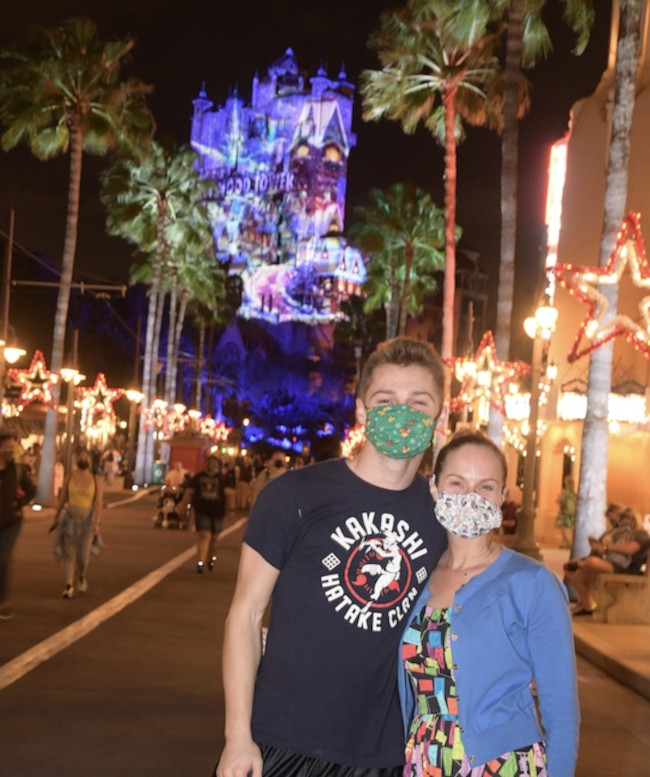 Austin and I at Hollywood Studios last year. Photo courtesy of Trisha Daab

Did you know? Guess which actor in the Marvel movies was a college cheerleader! Hint: He’s a member of SHIELD. Get the answer at the bottom of this post!

Planning to be at Magic Kingdom during the 2021 Varsity Spirit Spectacular? Here’s what to expect: 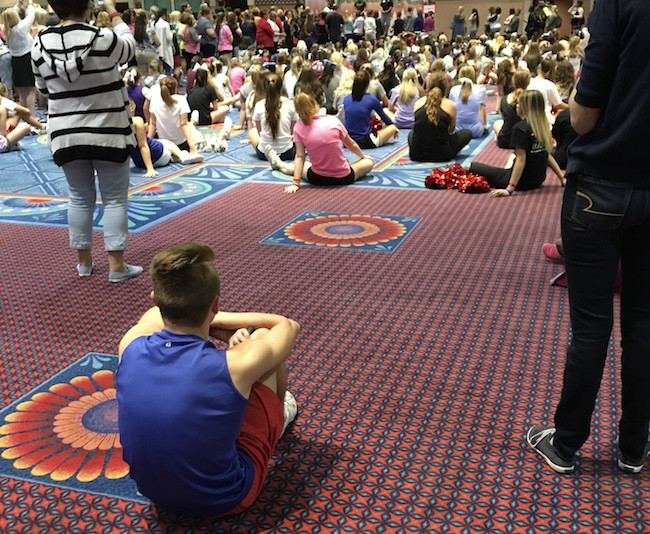 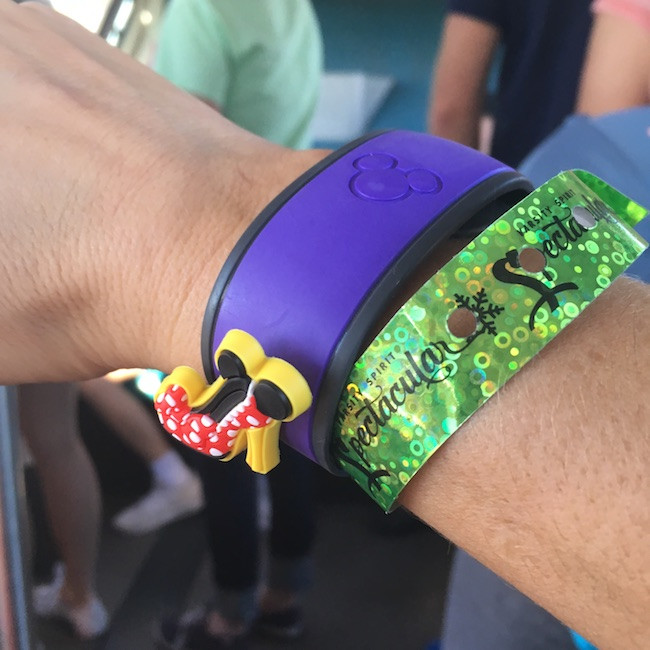 The Most Magical Place To Cheer

Disney World is home to many national and even international cheer events throughout the year. These events can draw huge crowds. Depending on your resort, you may be waking up to the sounds of clapping, music, and gasps when cool stunts are performed.

There are so many cheerleading events at Disney, in 2018, ESPN Wide World of Sports opened a 300,000-square-foot venue specifically designed for cheer and dance events.

Fun Fact: In July of 2021, cheerleading was officially recognized by the International Olympic Committee. Cheerleaders around the world are hoping we will see cheerleading in the Olympics in Paris in 2024.


The All-Star Resorts are the most popular for many of these athletes, especially at the college level, because they offer large open spaces for practicing.

Some of the events are currently listed on the ESPN website.

Your Complete Guide to 2021 Christmas at Disney World