See the Pixar Stars at the Canadian Premiere of Turning Red 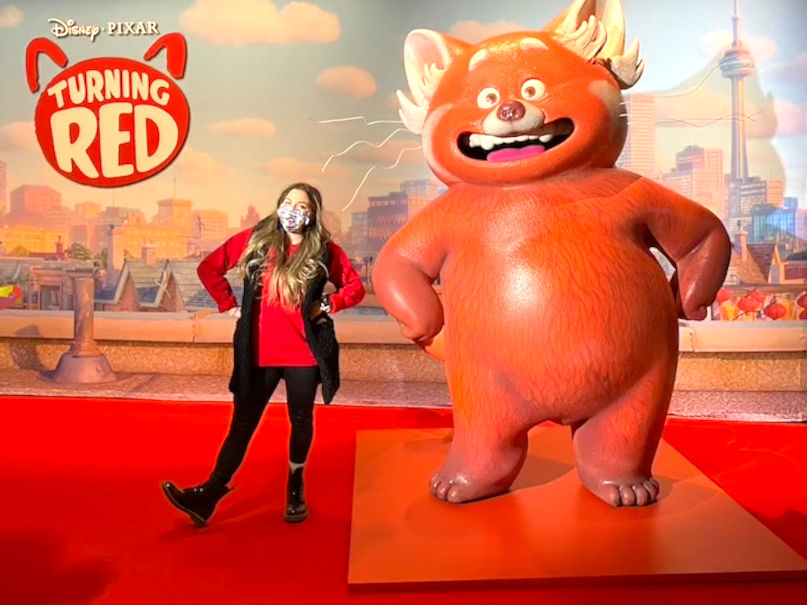 We attended the Canadian premier of Turning Red, Pixar’s latest film, which takes place in Toronto. Here’s what happened when we saw the stars of the film.

Turning Red takes place in Oscar-winning director Domee Shi’s hometown of Toronto, Canada. As a Canadian myself (and a huge Disney fan), I cannot downplay how excited Canadians are about this movie. 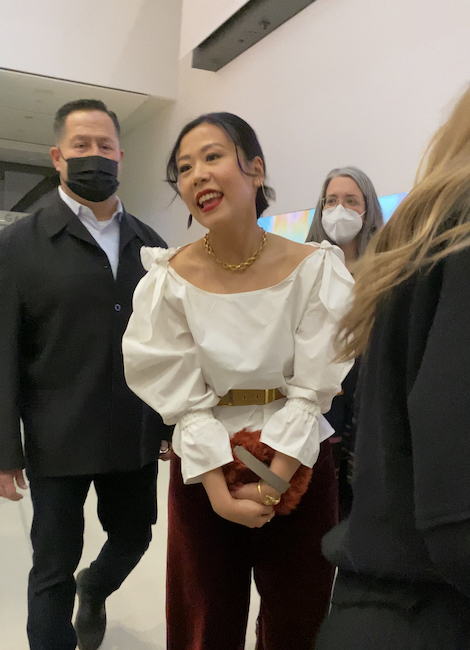 In the days leading up to the release of Pixar’s Turning Red, a giant Panda Mei statue made its way around Canada, making a few stops in and around Toronto for the Canadian premiere of the film. 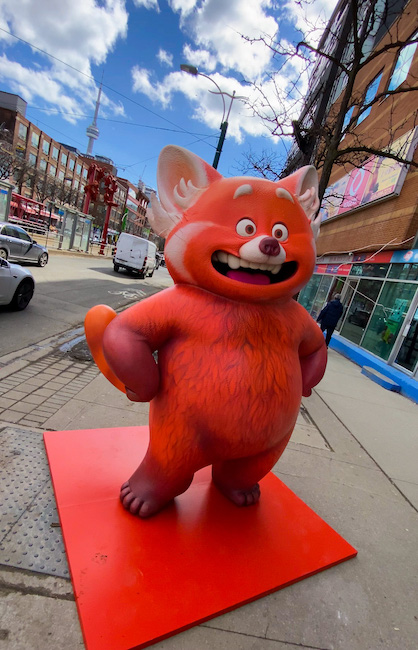 The Panda Mei statue in Toronto. Photo by Alessandra Sferlazza

The main character, Mei, actually “took over” the @disneystudioscanada Instagram account for one of these days as well. It was very cute! 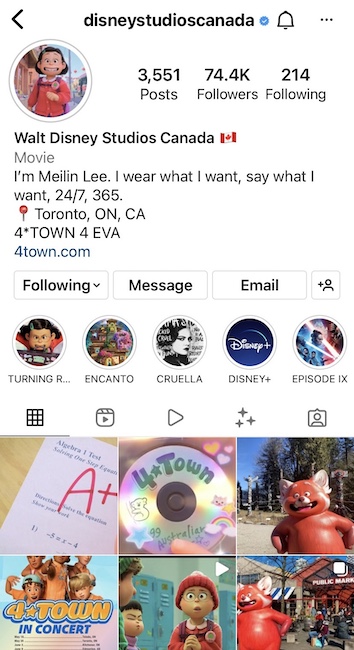 The Canadian Premiere of Turning Red was hosted by TIFF (Toronto International Film Festival) on March 8 at 7 PM. This was an invite-only event, but like many events hosted at TIFF, there are areas that are open to the public, which is where I went. 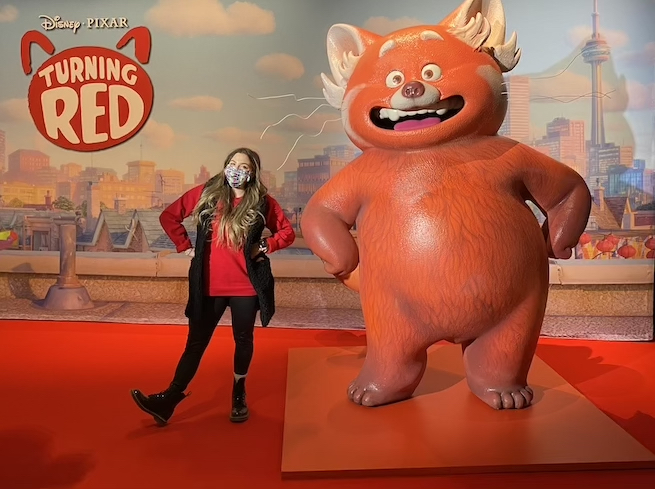 During the Canadian press tour, director Domee Shi was accompanied by actors Sandra Oh, Rosalie Chiang, and Maitreyi Ramakrishnan to promote the release of Turning Red.

These actors lend their voices to the main characters in this film, and they walked by the excited fans, like myself, very graciously, saying hello to a few people behind the roped off red carpet area.

Meet the Cast of Turning Red at the Canadian Premiere

Rosalie Chiang voices Meilin “Mei” Lee, who is the main character in this movie. This  talented 16-year-old’s first on-screen credit was in 2017 (in Clique Wars). Voicing Mei in Pixar’s Turning Red will be her biggest role to date. 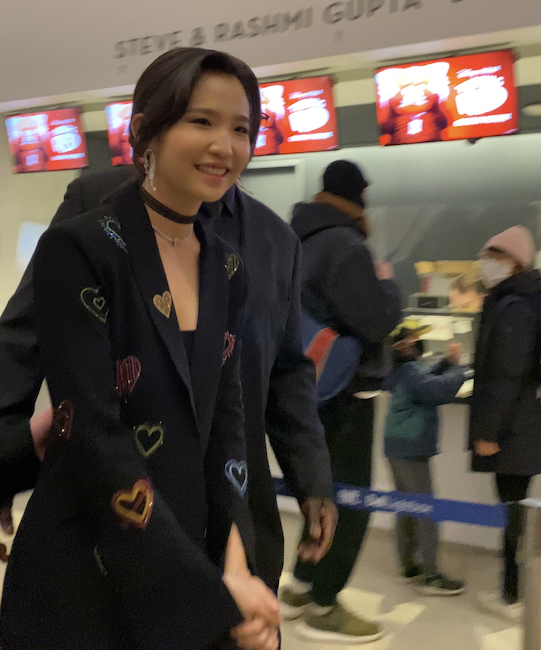 Rosalie Chiang at the Toronto premiere of Turning Red. Photo by Alessandra Sferlazza

Canadian actress, Sandra Oh, voices Mei’s mother, Ming. As kids, my sister and I were obsessed with The Princess Diaries, so I fondly know Sandra Oh as Vice Principal Gupta. Talk about Disney royalty! 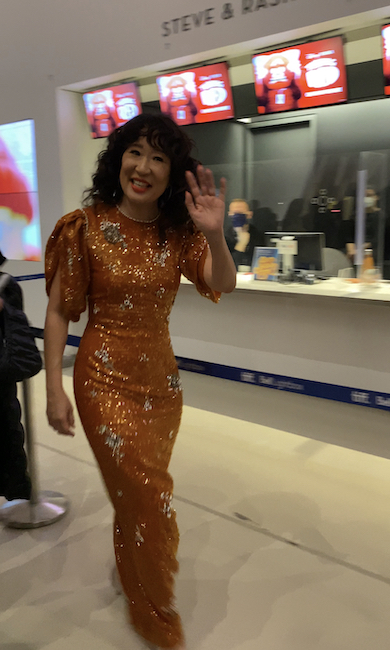 Why yes, I did say hello to Sandra Oh at the Canadian premiere of Pixar’s latest hit. Photo by Alessandra Sferlazza

Maitreyi Ramakrishnan voices Priya and is also a Canadian actress, most popularly known for her role as Devi in Netflix’s Never Have I Ever. 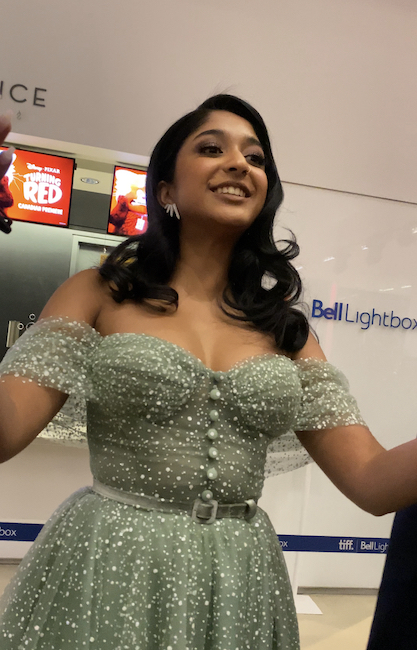 Maitreyi Ramakrishnan at the Turning Red premiere in Canada. Photo by Alessandra Sferlazza

Maitreyi and I are both from Mississauga, so we had a lot to talk about. As you can see in the TikTok below, she has a lot of hometown pride and was such a delight to talk to.

Bottom line: It’s an incredibly good week to be a Canadian Disney fan! No matter where in the world you are tuning in from, this movie is sure to be a new Disney fan favorite. Pixar’s Turning Red is streaming now exclusively on Disney+.

Check Out These Turning Red Attractions at Disney Parks This Spring