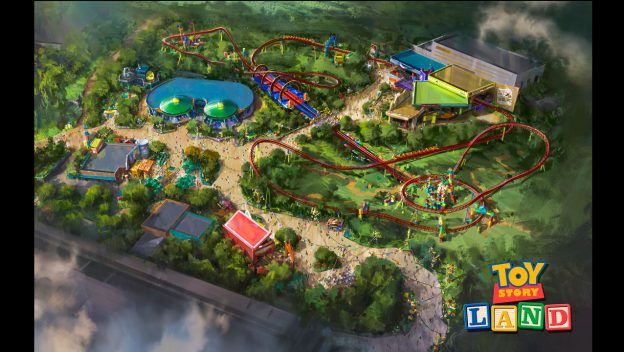 A few weeks ago, WDW Magazine and some other Disney media outlets were invited to join a tour of the construction of Toy Story Land every thirty days to see how the construction was progressing.

The tour started out in front of the model for Toy Story Land in Walt Disney presents. After some preliminaries, Ryan Weinagar (I think that’s how he spelled it) from Disney Imagineering talked us through the story of “Andy’s Backyard” or as we know it Toy Story Land.

(Sorry for the extra cell phones there but there were a bunch of us in a really tight space.)

A big announcement was made during Ryan’s talk. He announced that Woody, Buzz and Jessie would have a meet and greet in Toy Story Land. This was something new and big. 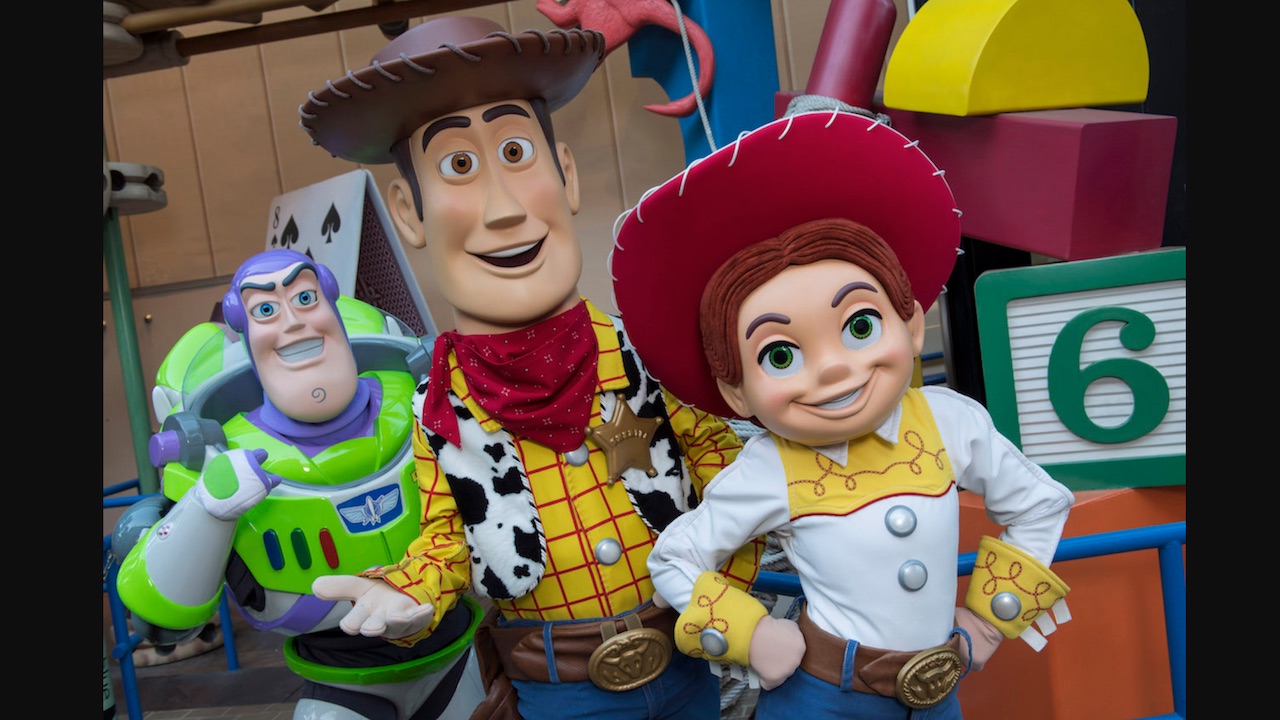 Buzz, Woody and Jessie are getting their own meet and greet area – photo courtesy of Disney

We were escorted through one of those doors that says “Cast Members Only” into the area behind Disney’s Hollywood Studios. Nothing to see here… “These are not the droids you’re looking for.” (Just seeing if you’re still reading.) In a minute, we walked through a huge chain link fence and into the back part of Andy’s Backyard. 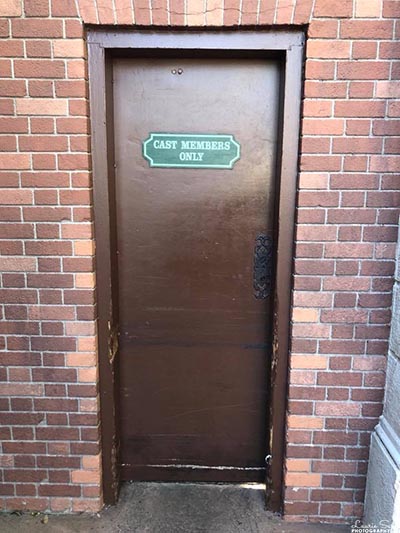 A door like this one – Photo by Laurie Sapp

My first impression was that Andy needed a lawn mower. The grass was 3 feet tall (on purpose as I found out in a minute).

We set up in area right in front of Jessie and Rex of Slink Dog Dash, the new roller coaster in Toy Story Land. They had built a special area just for us where we could walk around a little and see everything most of Toy Story Land.

We stopped in our little area and Ryan “showed” us around Andy’s Backyard. Let me tell you what I saw…

The Entrance to Toy Story Land

When you walk into Toy Story Land, you’ll be walking into Andy’s Backyard. The idea is you are the height of a Green Army Man, the actual toy. You’re 2 inches tall. Everything around you is built from Andy’s toy box.

Ryan showed us where the entrance would be. The pictures show this as grass and trees, but the only thing we could see of the entrance was one of Andy’s footprints in the concrete. It was huge. I estimate it was around twenty feet long and eight feet wide (actually it’s 25 feet long and a size 240).

Needless to say there’s a lot of work left to do in the entrance. 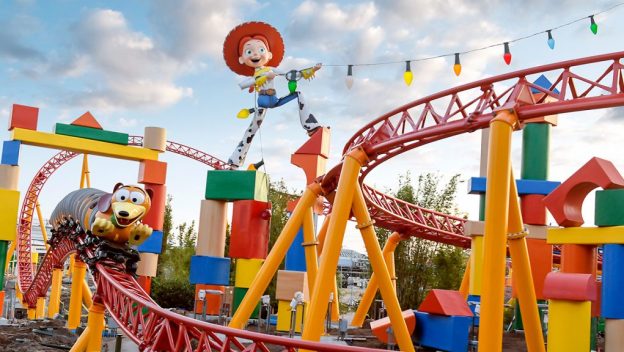 We were standing right here – Photo courtesy of Disney

We’ve all seen the pictures of Slinky Dog Dash. Disney has released video of Slinky Dog arriving, of Jessie and Rex being put into place, the last piece of track being laid, and even of a test of the roller coaster. It seems like Slinky Dog Dash is ready to go. It’s all done. It’s probably even been tested. I think the Imagineers ride it all day. I would.

Surrounding Slinky Dog Dash was the backyard’s picket fence. It was literally 30 feet tall. It looked like a big picket fence like you’d see in any backyard. 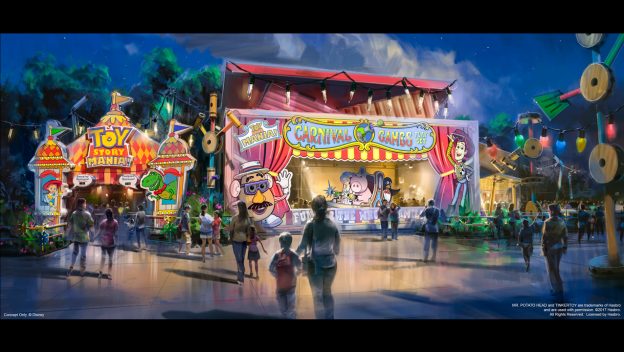 The facade was built up, but the connection to the Toy Story Mania building has not been built. The facade was just a white building, but you could see the shapes and imagine what it would look like. 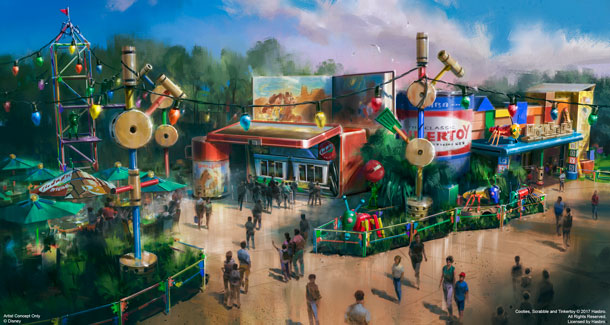 Next was Woody’s Lunch Box. A boy playing in the perfect backyard has to eat sometime right? So why not pack a lunchbox and be ready when the time comes.

Like the Toy Story Mania entrance, Woody’s Lunch Box is currently just a white building. Ryan told us that the ordering openings will look like Tupperware, OK, we’ll take your word for it, but for now it’s just a big empty opening into a big empty building. 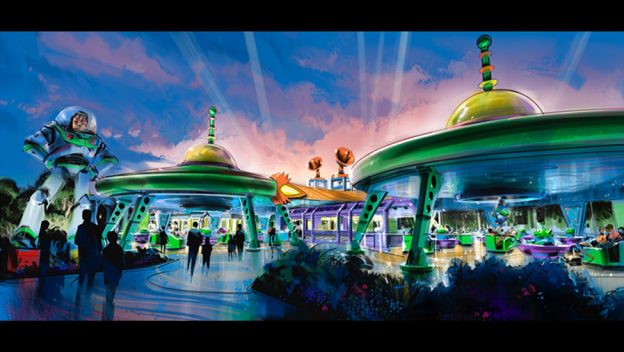 The outside of Alien Swirling Saucers – photo courtesy of Disney

Way up in the back of Andy’s Backyard is Alien Swirling Saucers. This is going to be the other cool new ride in Toy Story Land. Ryan told us how he was working every day testing the ride.

We could only see the tops of the saucer buildings. They were saucer shaped, but there was still steel supports showing. From what Ryan said, the inside of the ride is about ready to go, but the outside still needs some work.

On the day of our tour it was 100 days until Toy Story Land opening day and it showed. There’s still a lot of work to do, but the structures are all in place and all that’s left is some paint, and a little, no a lot, of finish work.

We could see how things were supposed to look and work and it was really exciting. I can’t wait to come back in 30 days and see how it’s coming along. Maybe next month they’ll let us take pictures. Check back in a month and see how the construction is coming along.