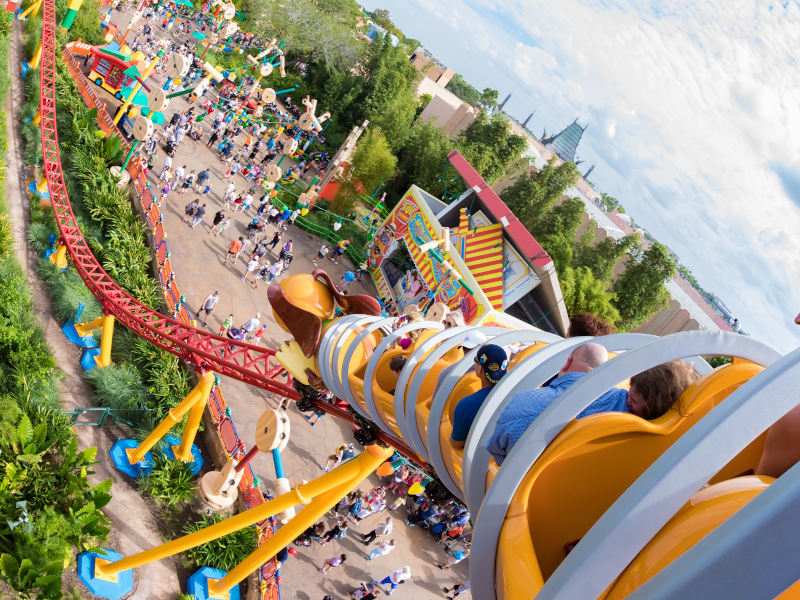 Want to learn more about your favorite Hollywood Studios roller coaster? We have six paw-sitively delightful Slinky Dog Dash facts for your next visit to Toy Story Land.

As one of the few child-friendly thrill rides at the Walt Disney World Resort, Slinky Dog Dash is a favorite among adrenaline junkies old and young. This charming roller coaster is easily a highlight of Hollywood Studios for families, with its trail of hills, curves, and twists providing a great outdoor view of Toy Story Land from above.

ALL THANKS TO ANDY 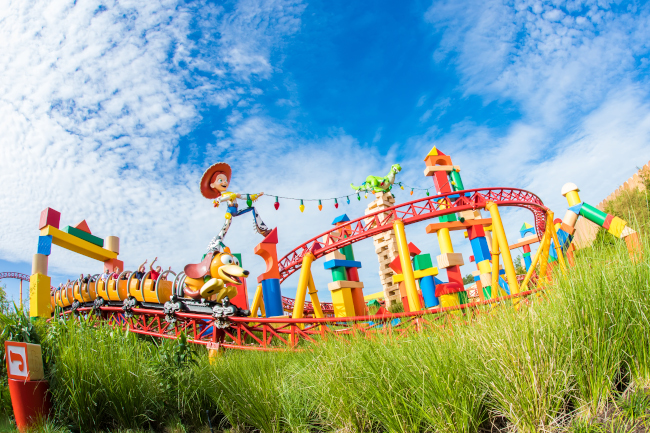 When approaching the entry gate for Slinky Dog Dash, you’ll quickly notice that this is no ordinary roller coaster. This one-of-a-kind ride is the result of Slinky Dog’s owner, Andy (with some help from Disney Imagineers).

Andy built the track himself using his Dash & Dodge Mega Coaster Kit; you’ll see the box for the toy set above you as you enter the ride’s queue.

Instead of settling for the basic car that came with the playset, Andy used his ingenuity to attach Slinky Dog to the train by wrapping the plastic hound’s spring around it. You can see Andy’s schematics sketched on notebook paper with crayons and pencils as you wind your way through the queue. 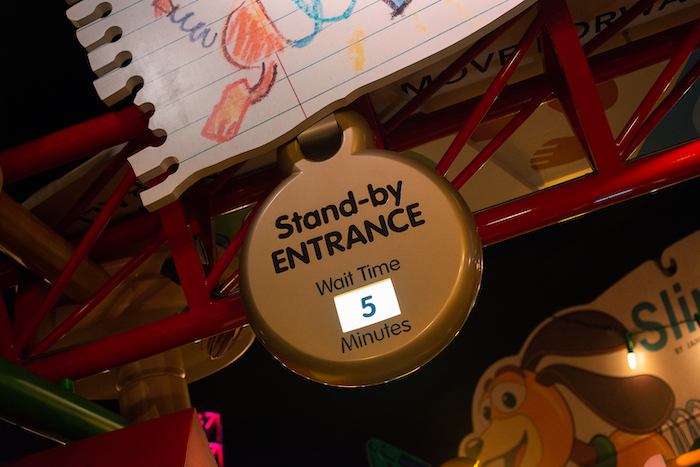 As you approach the entrance, you’ll see the standby time displayed on Andy’s wristwatch and the Fastpass time on some nondescript gold medal.

If you look at that medallion from the other side, you’ll see that it’s the I.D. tag from Buster’s collar, Andy’s dog he received at the end of the first Toy Story movie when the family moves into their new home. The house’s address — 234 Elm Street — is even inscribed on it. 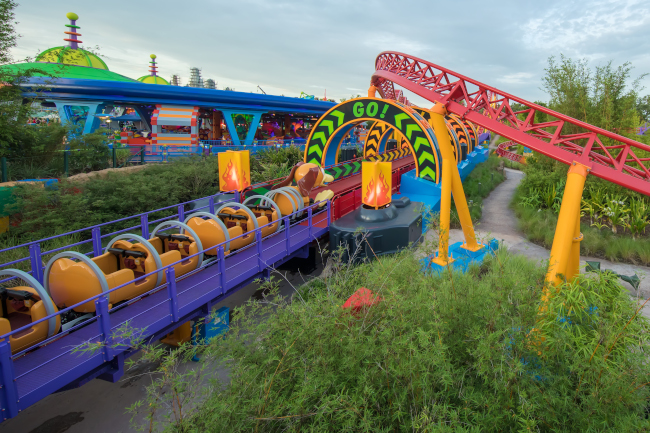 As you approach the boarding station, take a look at the drawings on the wall. The ride you’re preparing to embark on is depicted in Andy’s hand-drawn artwork.

His original vision is very close to the real thing you’ll be experiencing — although won’t be an Evil Dr. Pork Chop breathing fire at you or green army men parachuting from the sky.

If you enjoy finding Hidden Mickeys, there’s one on this notebook paper mural. Look toward the upper-right corner of the drawing. One of the clouds above the army men is shaped like the mouse’s recognizable silhouette.

A WILD TIME IN THE BACKYARD 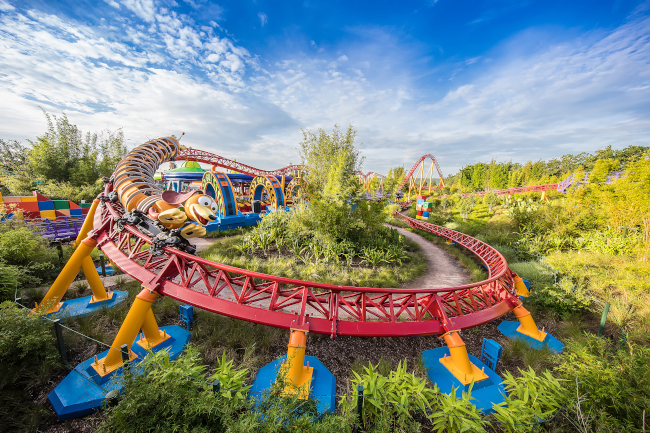 As their owner is currently away, the toys are active and ready to have fun. Now that you’ve been shrunk down to the size of an ant, you can climb aboard Slinky Dog for a wild ride.

The ride takes place in Andy’s backyard, where he set up his coaster track.

The attractions’ designers cleverly used shrubs, bushes, and tall field grasses to cover the landscape below you. These plants resemble large versions of grass and weeds you’d see growing on a lawn, adding to the illusion that you’ve shrunk in size.

You’ll see other beloved Toy Story characters throughout the ride, like Jessie, Rex, Mr. Pricklepants, and Wheezy the penguin serenading you with the movie’s Oscar-nominated song, “You’ve Got a Friend in Me.” It’s im-paws-ible not to sing along with him! 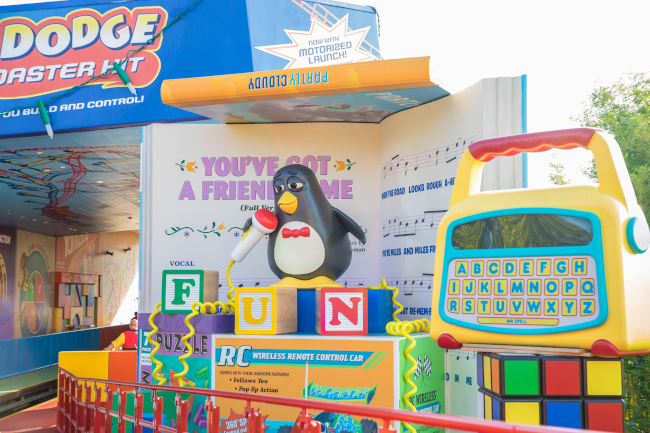 In addition to the Tinkertoys and wooden blocks used to build the custom coaster, Andy has used Rex’s original packaging. Tyrannosaurus Rex box depicted is a far more menacing green lizard than the timid, bumbling one we know.

The massive box even has the price sticker still on it: $19.95. In case you don’t recall, that was the year Disney and Pixar released Toy Story in movie theaters — almost 30 years ago! The numbers 11 and 12 are also stamped on the price sticker, so the exact date of the film’s opening is shown: November 12, 1995. 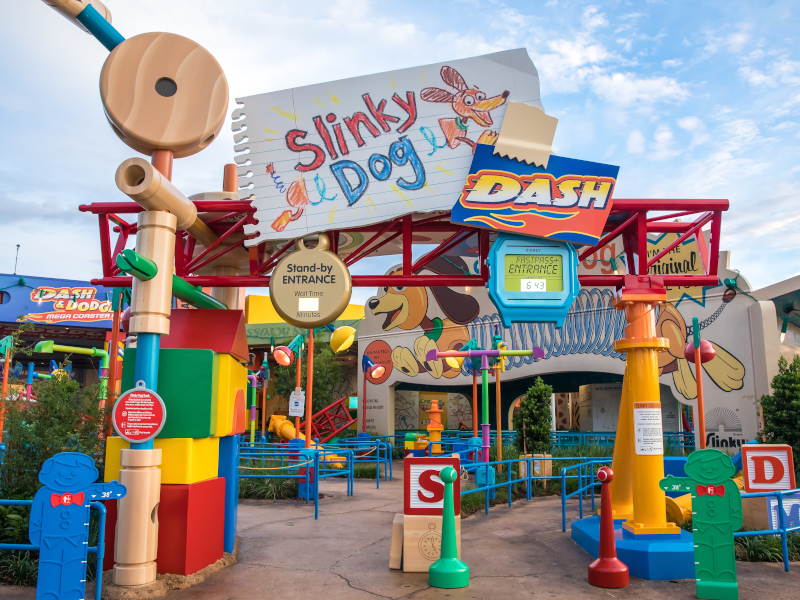 Slinky Dog Dash is the only Walt Disney World coaster with two launches: at the beginning of your ride and halfway through after you pass under the bridge. The latter stops your momentum entirely, giving you a brief pause before sending you over its huge hill.

Why is “The Big Stop” and second launch part of the design? Disney’s Imagineers purposefully crafted the coaster to imitate the movement of a toy. This “inter-ruff-tion” captures the feel of a pull-black, wind-up, and launch toy.

For being a roller coaster, the ride height requirement for Slinky Dog Dash is only 38 inches (even less than other mild coasters like Big Thunder Mountain Railroad). There are no loops, corkscrews, or sudden drops here, so it won’t be a “ruff” ride for young passengers!

In my opinion, Slinky Dog Dash gives the classic Rock ‘n’ Roller Coaster Starring Aerosmith a run for its money, but that might just be my nostalgia talking. Which do you think is the superior roller coaster in Disney’s Hollywood Studios? Which of these Slinky Dog Dash facts were your favorite? Tell us in the comments on our Facebook page!