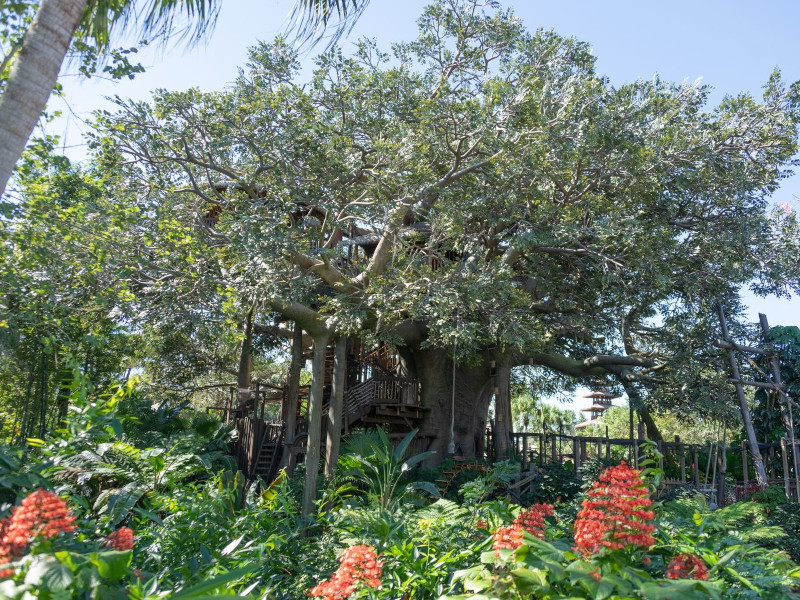 Get to the root of these five Swiss Family Treehouse facts.

When you think of Adventureland in Magic Kingdom, what comes to mind?

Do you remember classic rides like Jungle Cruise or Pirates of the Caribbean? Or maybe you recall debates on what’s better: a Dole Whip from Aloha Isle or a Citrus Swirl from Sunshine Tree Terrace?

While there are many great rides and treats available in Adventureland, one attraction that tends to be forgotten is the Swiss Family Treehouse. As a walk-through attraction, you may argue that even the nearby The Magic Carpets of Aladdin provides a more thrilling experience.

However, it is a great place to take a break from the crowds and walk through an immersive environment. While kids will enjoy exploring and imagining what it’s like living in a treehouse, adults will admire the Imagineering feat of building a massive treehouse replica.

If the original fake tree of WDW (sorry, Tree of Life) is always on your skip list, take a look at these five Swiss Family Treehouse facts. They may just make you want to branch out from your normal WDW itinerary.

1. There is an official name for this massive tree 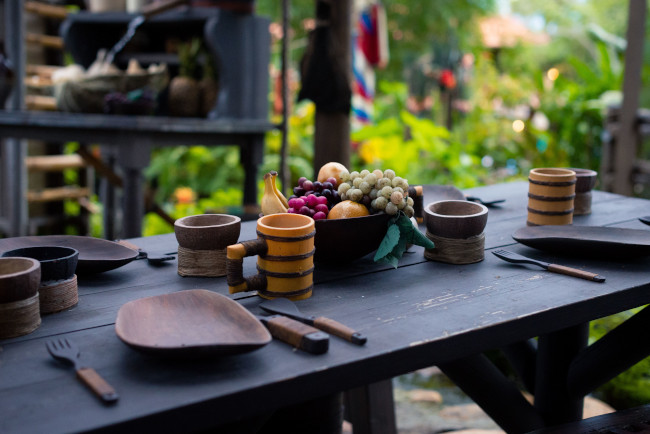 Attention to detail has been a huge reason Disney World has always felt magical, and the tree at the center of the Swiss Family Treehouse is no exception. Its official name is Disneyodendron eximus, or “out-of-the-ordinary Disney tree.”

And it definitely is not ordinary at 90 feet high and 60 feet wide. What’s underground is just as impressive too. To support the structure, the tree’s roots go 42 feet deep into the ground.

But that’s not all. Imagineers created 330,000 artificial leaves to create this attraction. All in all, this impressive construction weighs 200 tons. In other words, this tree ain’t going anywhere. 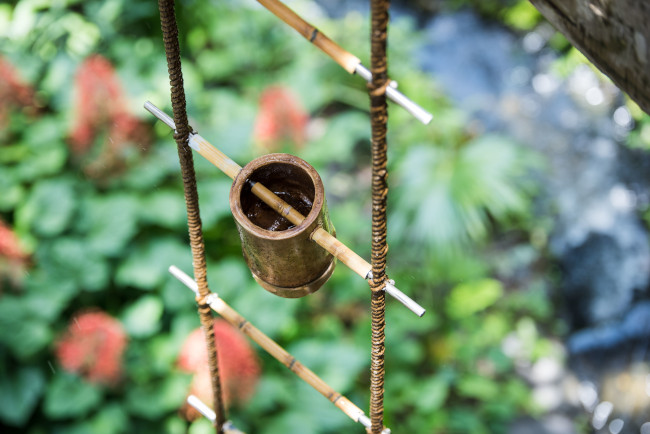 The story revolves around a Swiss family involved in a shipwreck who end up on an island and create an elaborate treehouse, which of course is what this attraction is based on. Features include the water-gathering wheel and other mechanical contraptions.

3. No reservations are needed 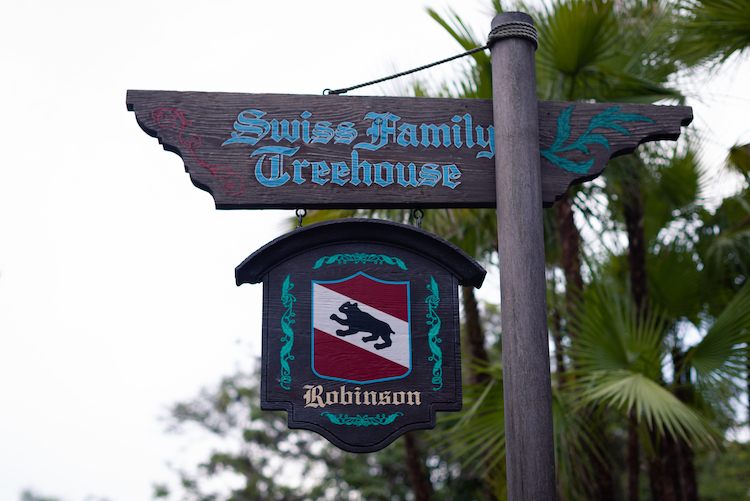 No reservations are needed. Photo by Courtney Reynolds

One of the benefits of the treehouse is that there’s usually never a wait to get in. It’s also not too crowded most of the time. So the fact that you couldn’t reserve a time with FastPass was never an issue.

We don’t expect it to be available through the new Genie+ reservation system either. In fact, I’d be concerned if you were using your reservation on the Swiss Family Treehouse, even if it was a reservable option!

Now, it’s not an attraction that on its own is worth coming over to Adventureland from the other side of the park. But if you’re already in the area and need to kill some time without waiting in line, this is the perfect option.

4. It is not accessible, unfortunately 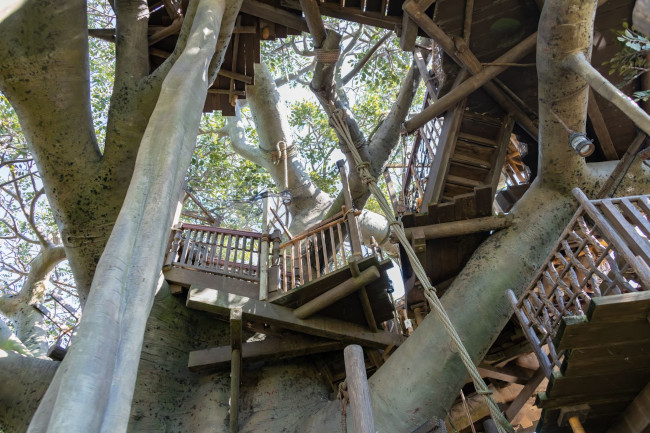 So. Many. Steps. Photo by Laurie Sapp

Accessibility is important at any destination so that everyone can enjoy the experience. Disney World does a great job ensuring people with disabilities can have a wonderful vacation.

However, not all attractions are wheelchair-friendly, and the Swiss Family Treehouse is one of them.

Due to the nature of the layout, the treehouse does not feature an accessible path or any elevators. There are 116 steps that visitors will need to climb, but the aerial views of Adventureland are definitely worth it for those who are able to make it to the top.

5. There are versions in other Disney parks as well. 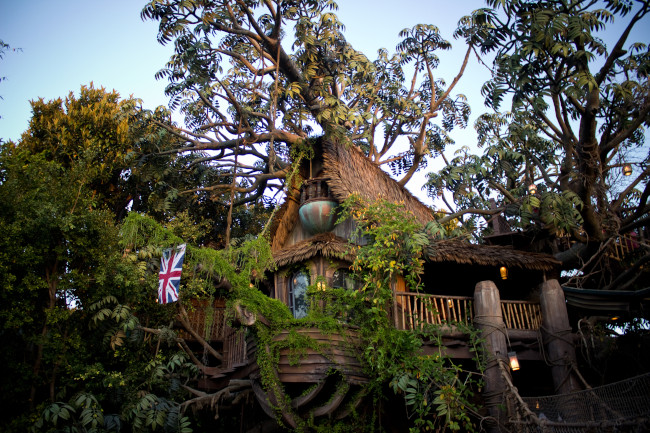 Swiss Family Treehouse is an original Magic Kingdom attraction included in the park’s opening in 1971. There are also versions of it in Disneyland Paris and Disneyland Tokyo.

The version at Disneyland in California was rethemed as Tarzan’s Treehouse in 1999. When Hong Kong Disneyland opened, their treehouse also included the Tarzan theming.

Personally, while I think the Swiss Family Robinson theme is unique and interesting, a Tarzan retheming at Magic Kingdom would be a welcome change. It would be a movie that many more people are familiar with (and has one of the best soundtracks, thanks to the musical genius of Phil Collins).

So after browsing these Swiss Family Treehouse facts, which team are you when it comes to this classic attraction: keep it or toss it? Let us know with a comment on our Facebook page.