5 Reasons to Go Late-Night Shopping at World of Disney 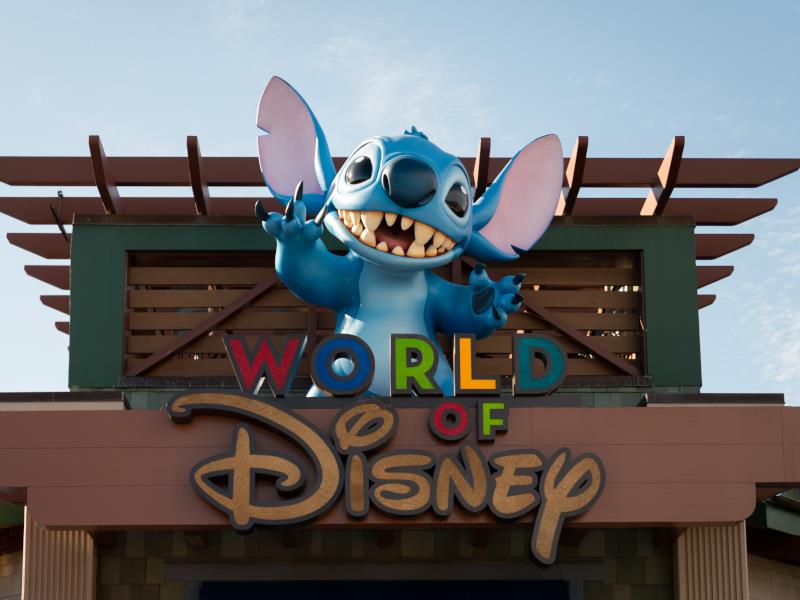 Let me introduce you to your new favorite nighttime activity at Disney World: late-night shopping at World of Disney.

I’m only a morning person when at Disney. Any fellow night owls out there that can relate?

Staying up late at Walt Disney World has its perks. You can get those magical shots with fewer crowds, find merchandise when Cast Members are restocking store shelves, and just experience a Disney that is quieter, less frantic, more peaceful.

When everyone else is rushing to the park exits after the nighttime show, fans know that’s a great time to shop.

Shopping is a much better use of time than standing in line to get to your locker, then to get out of the park gates, and then waiting for a bus. Maybe not quite as friendly on your wallet, but definitely more fun. 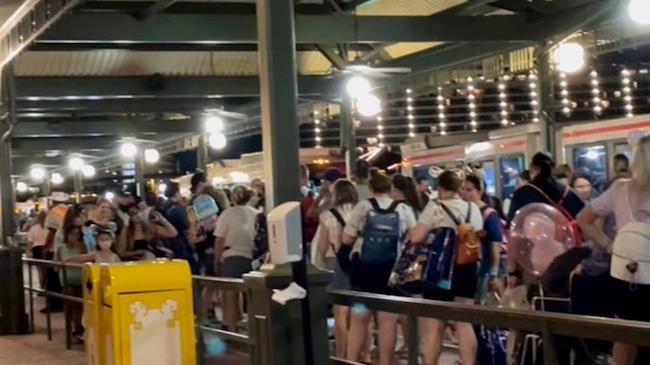 The bus line for Pop Century on October 1st, the 50th anniversary of Walt Disney World. Photo by Trisha Daab

On recent trips, I’ve found hopping over to Disney Springs to be a much more magical alternative when it’s late night and the parks are closing.

Consider heading to Disney Springs when: 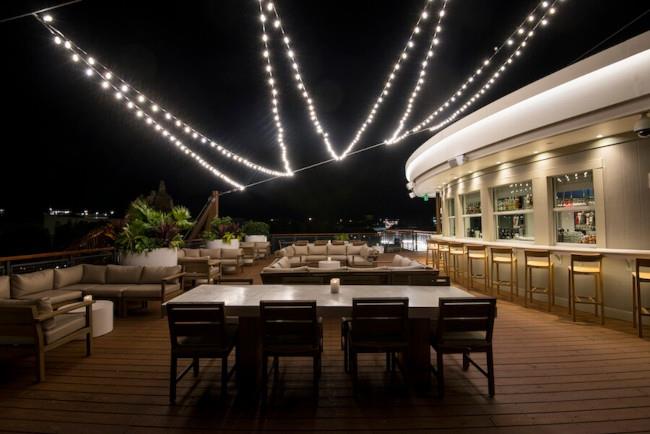 World of Disney at Disney Springs is a shopper’s delight. It’s the largest Disney merchandise store in the world.

It’s also a madhouse most of the day.

Often, there are lines to get in, lines near popular merchandise, and, of course, lines to check out.

This is why I love late-night shopping at World of Disney:

A decent percentage of the 50+ million of visitors annually to Walt Disney World find themselves at Disney Springs. Most of those guests will likely spend a few Disney dollars at World of Disney.

There are times when World of Disney is so packed it can feel like Main Street during a parade.

Shelves can be difficult to keep stocked, Cast Members are trying to help multiple guests, kids are crying, and it gets really loud.

Not always the most pleasant shopping experience.

Get into the store before it closes and then take your time. Cast Members are often there hours after closing to restock shelves

At closing, they no longer let more guests in, but they also don’t kick you out. Disney is not likely to deny you your haul of shirts, ears, pins, ornaments, or giant lollipops. 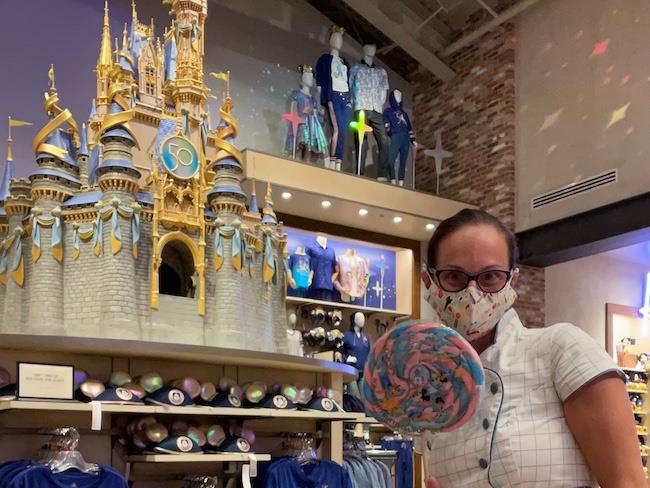 You can get really close to this replica of the 50th Anniversary Cinderella Castle. Photo by Trisha Daab

For the 50th anniversary, World of Disney is home to a magical replica of the 50th Anniversary Cinderella Castle in the 50th merchandise section. It’s a must-see! 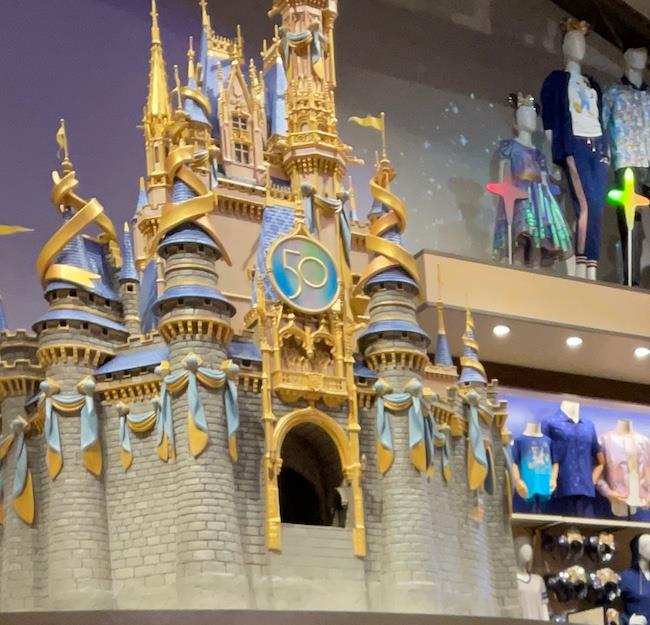 Once the doors close and the crowds start to thin, you can get up close to that display and see Cinderella Castle in a whole new way.

Previous cool displays have included a projection on a giant Mickey ear hat for the Mickey Mouse Club line and chandeliers of leaves for the launch of Frozen II. And the seasonal displays are not too missed. 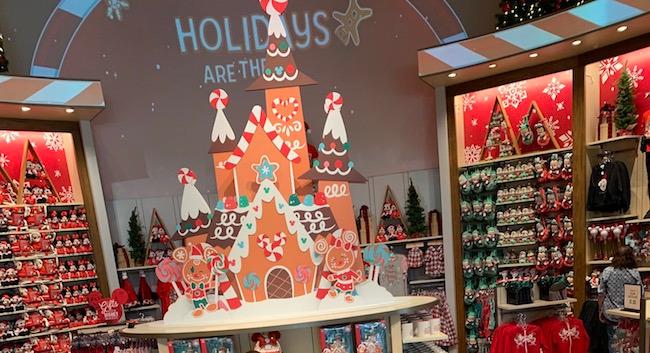 The most wonderful displays of the year are during the holidays at World of Disney in Disney Springs. Photo by Trisha Daab

World of Disney has magical photo spots sprinkled around the store.

But getting those snaps without a guest and their armfuls of Mickey ears and shirts photo-bombing you is normally tricky.

One more reason to visit late at night. The shelves are often stocked or in the process of being restocked. With fewer people making a mad dash for the latest pins, you can get the perfect shot! 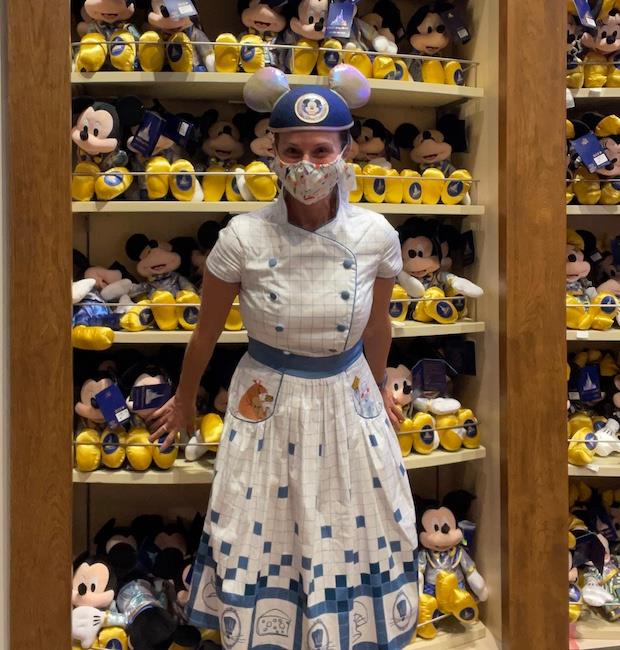 This big wall of Mickey Mouse 50th Anniversary Celebration plushes is one of my favorite Disney Springs photo spots. Photo by Trisha Daab

How many times have you stood at the registers at World of Disney? 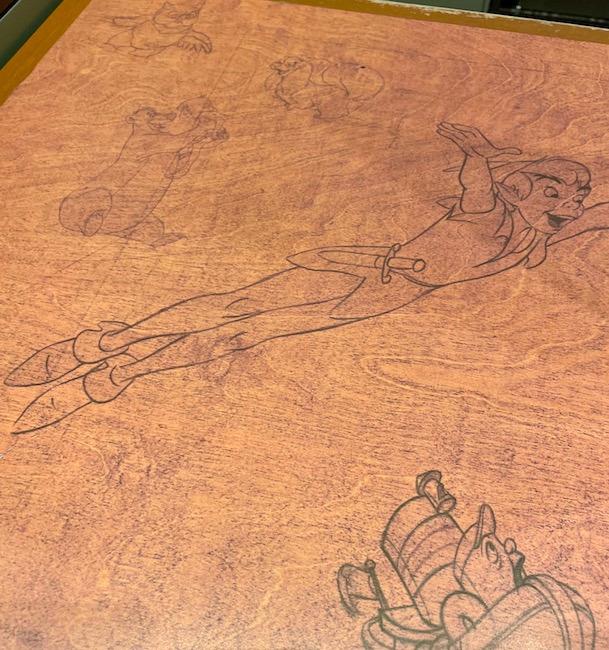 Make sure to look down at the counter before putting down all your merch when at World of Disney. Photo by Trisha Daab

Once your pile of merchandise is out of the way, make sure to look down to see the animators’ drawings on the counters.

It took 10 trips before I realized drawings of The Hitchhiking Ghosts from Haunted Mansion are on the countertops.

On that same 10th trip to World of Disney, it was after 11:30 PM when I stood in line to check out. Because I was late-night shopping at World of Disney and the crowds were low, I was able to hear a little tinkling sound.

Suddenly, there was a trail of pixie dust zooming around the jars of paint on the walls behind the registers. 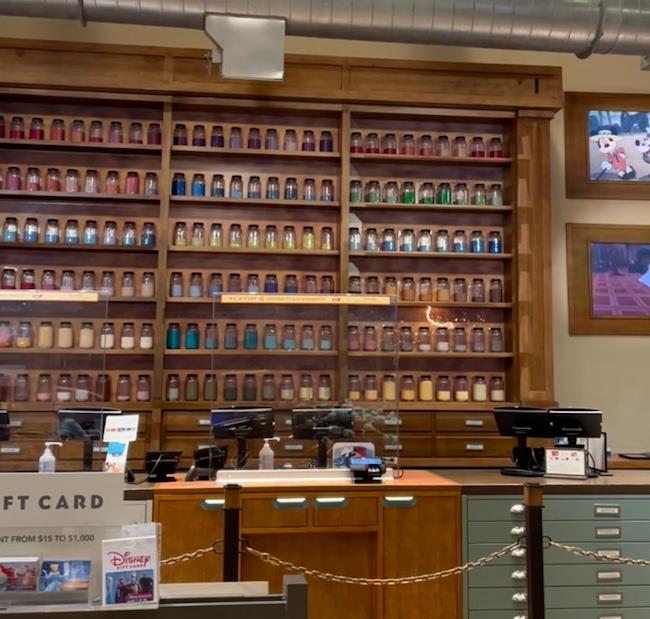 Tink is leaving a trail of pixie dust behind the checkout counters at World of Disney. Photo by Trisha Daab

Go to World of Disney later at night, and you’ll have a better shot of seeing Tink flitting between jars of paint before zooming into the framed art on the walls and changing the image.

It’s a must-see detail that is so easy to miss with the typical noise and action at World of Disney.

As the store nears close, Cast Members come out in droves to try and put away all those 50th pins that someone changed their mind about at the registers.

They’ll be searching for Mickey’s friends in the pile of plush that were put down in the wrong place when a parent said no or trying to get enough Mickey Ears back on the shelf for the morning rush.

Side Note: Pick up after yourself at stores. Cast Members are not your butlers and maids!

It’s during this much more peaceful time at World of Disney that CMs actually have a moment to breathe, help search for merchandise, and chat with guests. 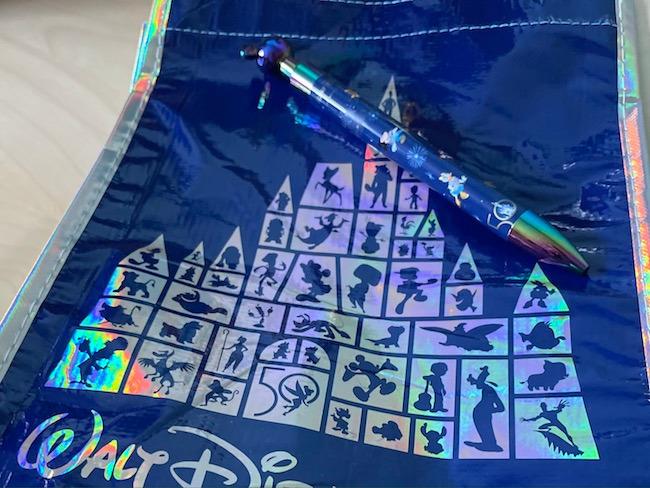 A 50th anniversary pen found by a magical Cast Member late at night at World of Disney. Photo by Trisha Daab

When late-night shopping at World of Disney on a recent trip, a friendly Cast Member was helping me locate a 50th anniversary pen for a friend.

She shared that there had been nonstop crowds all day, and she was glad to finally be able to help a guest.

During our 10-minute search (this CM was determined), we discovered a lonely mini 50th Mickey plush in her cart.

“I’m trying to find where his friends are,” the CM joked. “He’s so spiffy in his 50th outfit, I’m tempted to take him home so he’s not alone!” 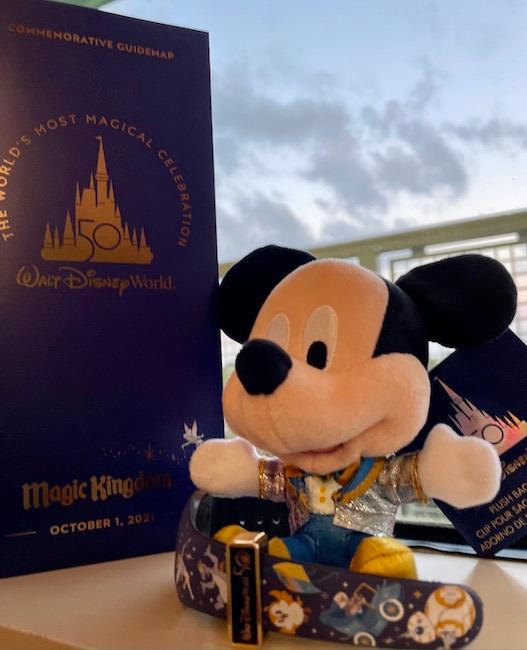 The World of Disney Cast Member didn’t want this Mickey plush to be alone, so he came home with me. Photo by Trisha Daab

And that is how this little 50th plush Mickey ended up at Pop Century and a journey to his new home in Chicago.

Cast Members make the magic at Walt Disney World. Whether it’s helping you shop at World of Disney, getting you safely back to your resort on the bus, or serving you a hot dog at Casey’s Corner, Cast Members are dedicated and magical. 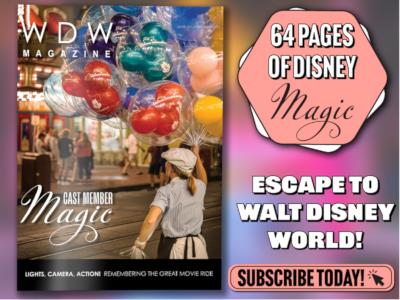 Get our special Salute to Cast Members issue of WDW Magazine when you subscribe by the end of this month!

Late-Night Shopping at World of Disney

So next time your bus line is long, you’re thinking of late night snacks at your resort, or figuring out when to shop, consider closing down your Disney day with a late night at World of Disney at Disney Springs.

Smaller crowds, moments of zen, and plenty of Cast Member magic await you!

What’s YOUR favorite time to shop around Disney Springs? Tell us over on our Facebook page!

Say Cheese: How to Find the Best Photo Spots at Disney Springs