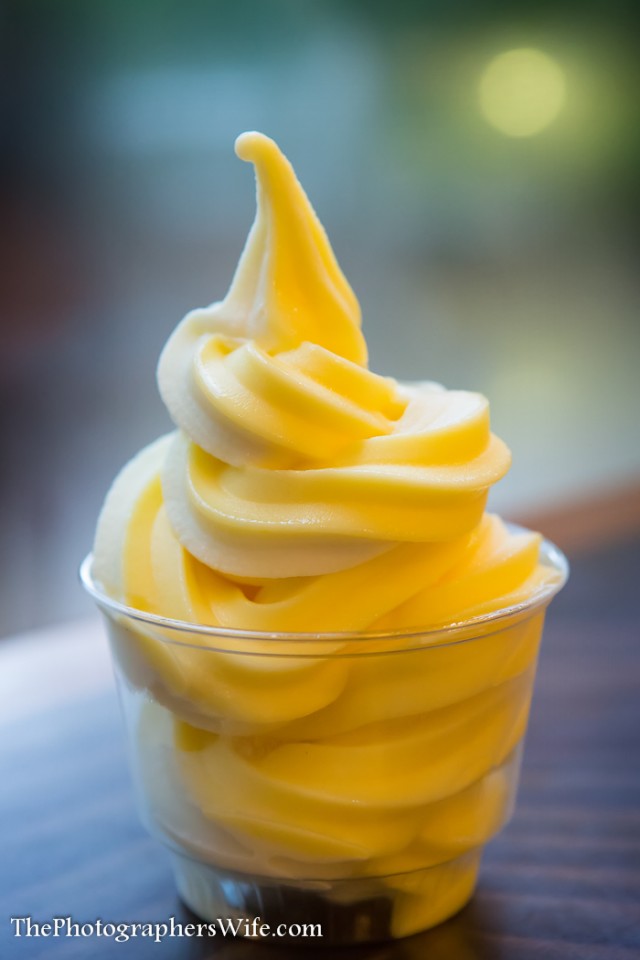 With so much to do and see, guests spend lots of time on the go at WDW, which requires a lot of fuel (aka: food!).  So today we’ll look at how you can combine some tasty eats with the time you spend zipping around the parks! I’m a huge fan of the cult-favorite pineapple treat, and it’s a great choice for taking on-the-go as you race from Adventureland to your next destination.  It’s huge (making it a great value and a good option to share), it stays cool even on a hot day, and it’s got fruit in it!  Plus, it’s vegan, gluten free, fat free, lactose free, and cholesterol free.  What more could you want?

When you’re settling in to watch Fantasmic! at the end of a long day of touring the park, you may realize you’ve had so much fun you’ve forgotten to eat dinner!  Enter the bread cone – a perfectly transportable cone of bread (surprise!) filled with your choice of delicious macaroni and cheese or fiesta chili.  Imagine it as a savory isce cream cone – once you eat the filling, munch on the cone!

The World Showcase Promenade is 1.2 miles – you’re bound to need a snack along the way to keep going!  This ham and cheese filled croissant is basically a flakey, buttery sandwich with the fillings baked right in!  It’s perfectly portable!

2 – Create Your Own Smoothie (Landscapes of Flavor, Disney’s Art of Animation Resort)

This is a great choice for when you need to fuel up in the morning, or get some fruit into the kiddos.  Choose your base flavor, add you favorite fruits, and watch while the Cast Member whizzes up your smoothie!  Yummo! This one comes to WDW all the way from Disneyland on the west coast, where hand-dipped corn dogs are a tradition!  We love anything on a stick, and this option is a lot easier to eat on-the-go than many of WDW’s gourmet hot dogs!  Bonus points: this one’s served off a Food Truck, making it the ultimate on-the-go item!

So there you have it – our top picks for on-the-go eats at WDW.

What are your favorite grab-and-go items at the most magical place on earth?