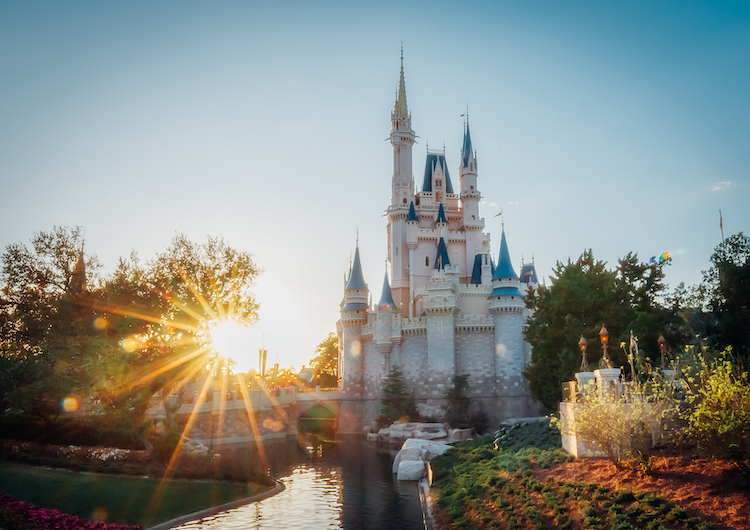 No Walt Disney World vacation is complete without a stop at Magic Kingdom. Seeing Cinderella Castle for the first time each trip is always so magical and breathtaking, no matter how many times I’ve seen it! And the magic goes beyond just the views—here are some truly magical Cinderella Castle facts for you!

Of course, it’s no surprise that there are hidden Mickeys around Cinderella Castle. Before some recent renovations, there was a particularly cool hidden Mickey to be found in the fencing around the castle. 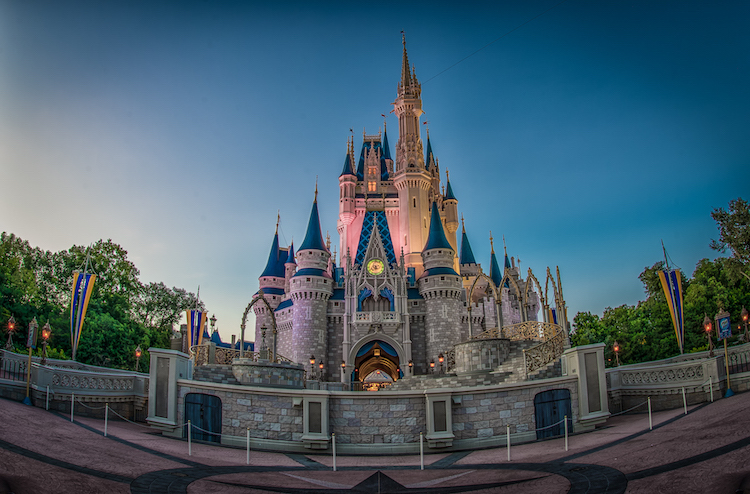 The fences are to the bottom right and left in this photo. Photo by Judd Helms

If you look at the fencing to either side of the castle, you’ll see three large circle cut-outs in the stone fences. When the light would hit it just right, a Mickey head shadow would appear.

You’ll notice the rose in the middle of the form—apparently, kids were sticking their heads through the large shapes, so Disney filled them in with the roses, without ruining the hidden Mickey effect!

Now, the fencing is a simpler and lighter gold metal. But, if you look at the front of the castle, directly behind the clock, you’ll see the same three circle shape in the stonework!

I think even up on the castle, it still looks like a Mickey, so I am counting it as a hidden Mickey. You can decide if is it close enough for yourself! 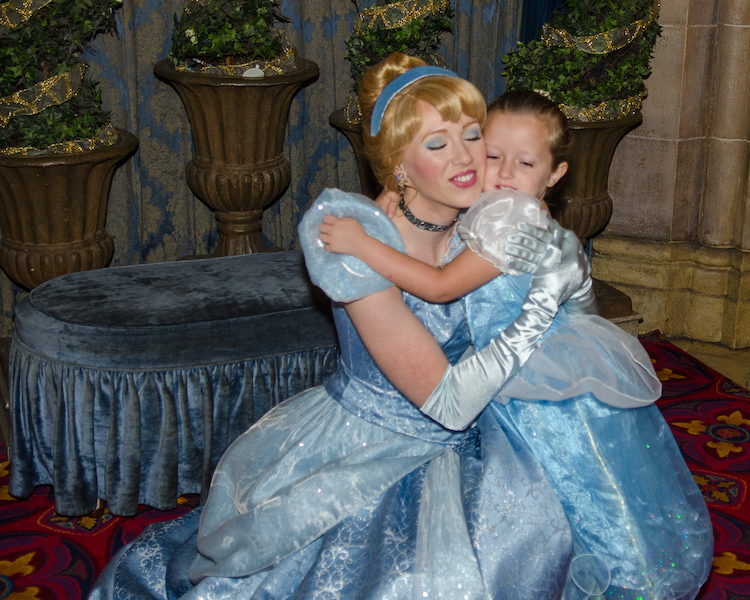 Guests can meet Cinderella herself at Cinderella’s Royal Table! Photo by Laurie Sapp

It makes sense that Cinderella would have a dining room inside her castle, where she can dine on the best food in the Kingdom.

But did you know that before it was Cinderella’s table, a different royal took up residence in the Cinderella Castle?

The restaurant you’ll find inside the castle used to belong to one King Stefan. But isn’t that Sleeping Beauty’s dad? Yes, it is.

It seemed confusing that a different fairy tale dad had a restaurant inside Cinderella’s Castle, so in 1997, it was changed from King Stefan’s Banquet Hall to Cinderella’s Royal Table. That makes a lot more sense, in my opinion! 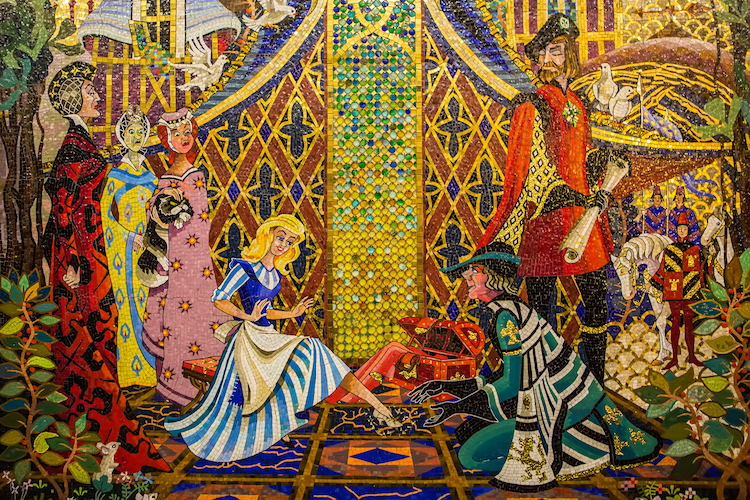 As a designer, I know how important color is and what it can mean. Disney Imagineers also know how to use color to their advantage, and to really convey meaning.

This beautiful mosaic is full of vibrant colors and so much meaning. One very interesting color choice we see is over on the Ugly Stepsisters.

Look at their skin tones—they are green and red tones, instead of a more natural tone. This is because they are “green with envy” and “red with rage.” Oh, and if you look close, the eyes are even green emeralds, shining with jealousy.

Talk about amazing storytelling! I love little instances like this that really tell us what is happening, even in a still image.

This might be one of those Cinderella Castle facts a few more people know about, but I think it’s one of those magical touches everyone should know about and admire.

Disney really spares no expense in the detail department. This goes beyond just adding touches here and there, but building symbolism into the architecture of every piece of the park.

Cinderella is looking down at the children below her. Photo by Mike Billick

Behind Cinderella Castle, you’ll find the Cinderella Fountain, where you see Cinderella sitting atop a beautiful water feature.

To us adults, Cinderella is in her pre-royalty attire, no crown atop her head. But to the eyes of a child, looking up at Cinderella’s face, they will see her as she is truly meant to be—wearing a crown!

Adults will need to kneel or bow to see her true beauty, while children will never need to bow to Cinderella to understand.

This is one of the coolest details, that while really small, makes a big emotional impact. I also had no idea this was there, so I am hoping I am teaching you guys something, too!

If you look right in the center of the castle, below the clock, you will see a crest symbol in stone. 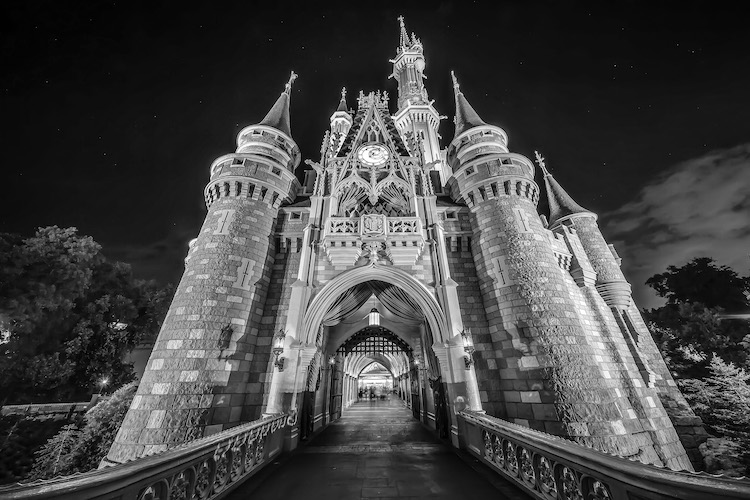 The coat of arms is in the center of the castle. The arches below the clock are pointing to it. Photo by Brett Svenson

Most visitors will pass by this, just thinking it’s nothing special, when in reality, it is the Disney Family Coat of Arms!

You can see the coat of arms on both sides of Cinderella Castle.

I think it’s incredibly special and a really nice touch to add the Disney Family Coat of Arms to the castle. It reminds us that Walt and the Disney family worked so hard for dreams and magic to become real, and we wouldn’t have it without them.

If you’re a really big fan (and I mean REALLY big) you might want to check out this amazing souvenir that might end up costing you more than your vacation! I will just continue admiring it from afar, I think.

Love learning little details about your favorite Disney World attractions, like these Cinderella Castle facts? Subscribe to our newsletter and keep up with us as we cover new Disney attractions weekly on the blog!