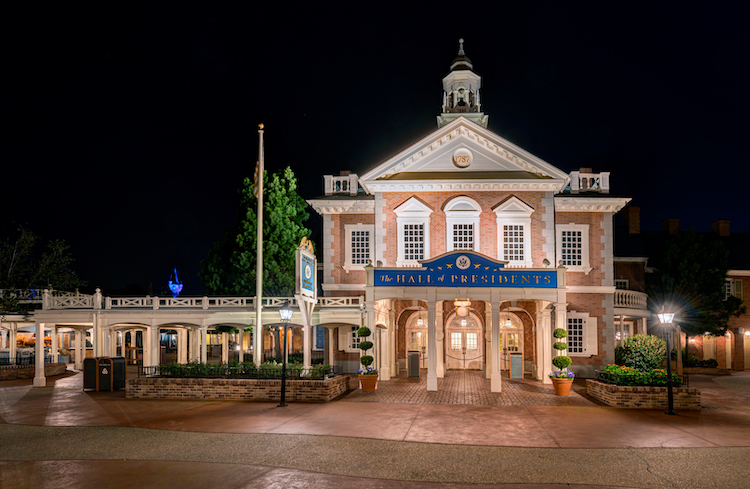 Liberty Square welcomes Magic Kingdom Guests to Revolutionary America, complete with nods to Paul Revere (the lanterns above the Hall of Presidents), pillories (not stocks!), a Haunted Mansion, sailing ships, and so much more. Keep reading to discover five historic Liberty Square facts  to note on your next stroll through the Magic Kingdom: 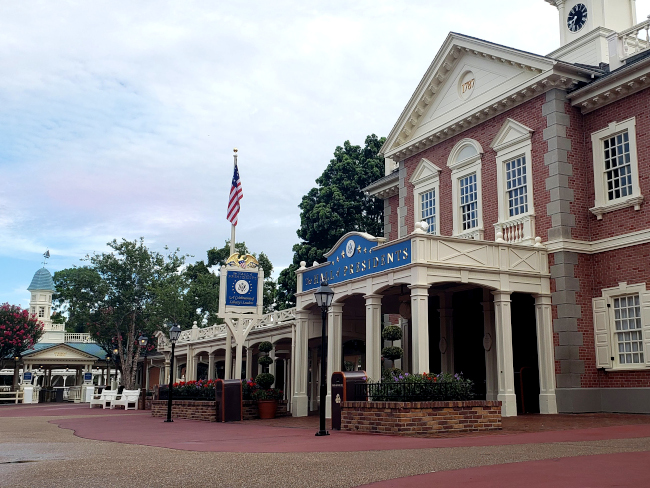 A view of the Hall of Presidents at Liberty Square. Photo by Rain Blanken

The original concept for a Colonial America-themed land at a Disney park came from Walt Disney’s 1956 announcement of Liberty Street in Disneyland.

Walt’s patriotism and interest in American history paved the way for much of Disneyland’s design concepts, and Liberty Street as he envisioned it would have taken the immersive history experience a step further, offering Guests the ability to experience what (an idealized) life in the colonies was like firsthand.

Liberty Street would have been an extension of Main Street U.S.A., dotted with storefronts selling authentic 18th-century wares, and even giving guests a glimpse into trades like blacksmithing and silversmithing at work.

Disneyland’s Liberty Street ultimately took a back burner to other projects during the early years of the park, but the concept re-emerged as Liberty Square while Imagineers were planning the opening of Walt Disney World (and considering attractions with a Revolutionary War focus for the 1976 bicentennial). 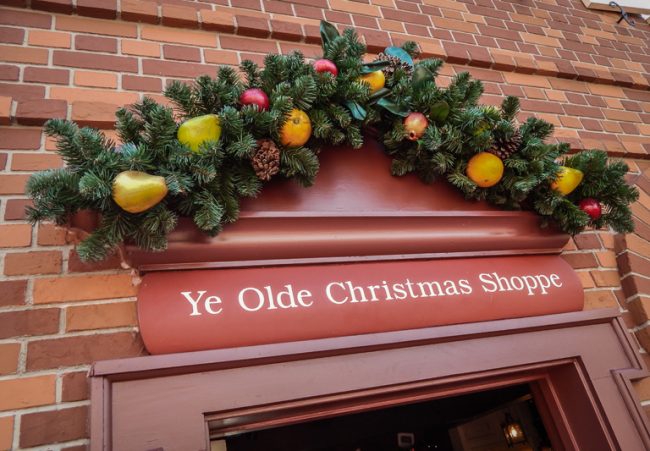 While not entirely historically accurate, Ye Olde Christmas Shoppe will always be a fan favorite at Liberty Square. Photo by Judd Helms

The most prevalent religion in 18th century America was Puritanism, which offered colonists a stricter (purified) version of the Church of England with a heavy focus on scripture in the most literal understanding of it.

Puritans not only did not celebrate Christmas but in certain parts of the colonies doing so was even outlawed for small periods of time leading up to the Revolutionary War.

Despite the attention to historical detail that went into other areas of Liberty Square, Ye Olde Christmas Shoppe has little basis in history but has become a Guest favorite while exploring this Magic Kingdom Land.

Imagineers created the story behind the shop, sharing that the Kepples (named for Walt’s grandfather, Kepple Disney), a family of German immigrants, founded the classic Disney shop.

Christmas celebrations were largely popularized in the U.S. by German immigrants sharing their traditions, however this took place much later than the timeframe Guests are meant to be in while exploring Liberty Square.

3. The Liberty Tree is the oldest tree in the park 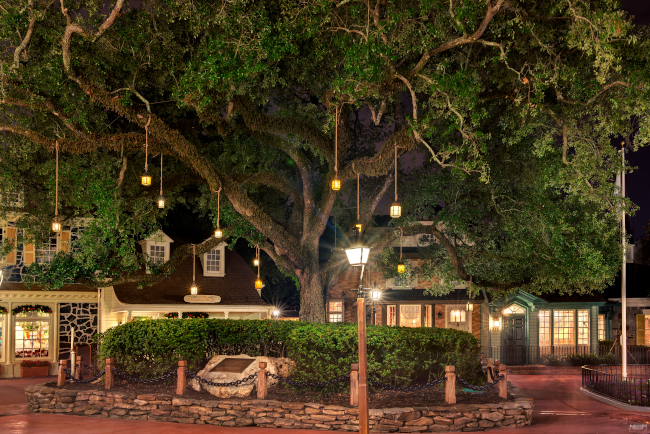 The Liberty Tree, adorned with lanterns at Liberty Square. Photo by Mike Billick

Taking its cues from other Revolutionary towns, Liberty Square is home to its very own Liberty Tree. The original Liberty Tree was located in Boston, where the Sons of Liberty met to discuss plans to protest the Stamp Act early in the Revolution in 1765.

The Liberty Tree is an over 100-year-old southern live oak, moved about eight miles from the other side of Walt Disney World property in time for the opening of Magic Kingdom.

The tree’s size and shape made its move a challenge for Bill Evans, head landscaper for the Magic Kingdom at the time. Evans devised a plan where holes were drilled through the base of the tree where steel rods could be used to hoist it out of the ground and planted in Liberty Square where it sits today. 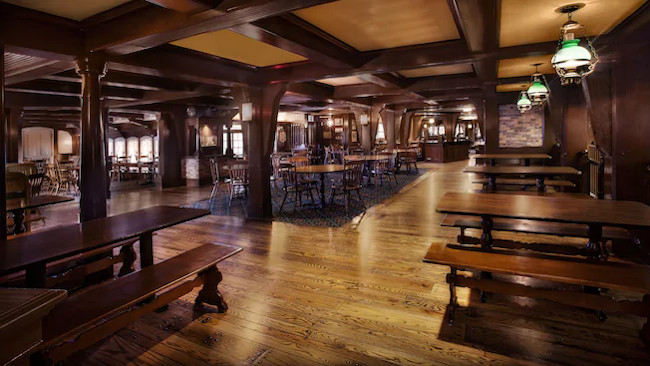 If you’ve ever enjoyed a meal overlooking Fantasyland from the second level of Columbia Harbor House, you may have noticed that much of this restaurant is actually located in Fantasyland.

The backstory of Columbia Harbor House brings nautical ties to Liberty Square and represents two harbors—one in the colonies where Guests enter in Liberty Square, and one in England, represented by the subtle changes in decor and windows overlooking the more European-inspired Fantasyland.

The restaurant’s name further pulls the story together as “Columbia” is a reference to the Columbia sailing ship, which in 1787 became the first American sailing ship to circumnavigate the globe. 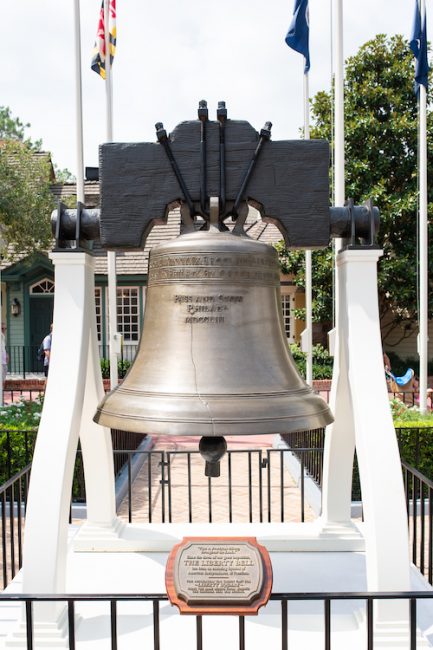 The Bell at Liberty Square was cast from the same mold as the original! Photo by Judd Helms

While Liberty Square may not fulfill Walt Disney’s original ideas that were more in line with today’s living history museums, there are lots of authentic details to take in while exploring the land.

The replica Liberty Bell for instance, was commissioned by Disney to be cast from the original mold at Paccard Fonderie of Annecy, France.

The flags that circle the Liberty Bell represent each of the thirteen colonies and the plaques at their bases share the date that each of those eventual states ratified the Constitution.

The Haunted Mansion is loaded with references to American history that could make for an entirely separate post, but one of the props at this Magic Kingdom staple can be seen before Guests even enter the attraction.

The hearse seen from the queue is an original prop that is now over 100 years old, and prior to finding a home with the park’s “happy haunts” it had a short stint in Hollywood.

Fans of John Wayne may recognize the hearse between the five to six minute mark in The Sons of Katie Elder (1965).

Narrowing down the history of Liberty Square to just five facts is a near impossible feat, but hopefully, you’re feeling inspired to take in some of the details in the Magic Kingdom’s most patriotic land and dive deeper into the history on your next trip to the park.

Want to know more? We featured the American history of Liberty Square in our July 2020 issue. If you missed it, no worries, when you subscribe to our digital edition, you’ll get immediate access to not only our current issue, but all of them!

Use code BIRTHDAYSALE at checkout to get $20 off your digital subscription. Hurry, offer expires October 8th!

Tiana Disneybounds for Your Next Trip Down the Bayou

Beneath The Magic: What Happens In The Magic Kingdom Utilidors?