5 Fascinating Facts About The Mexico Pavilion At EPCOT 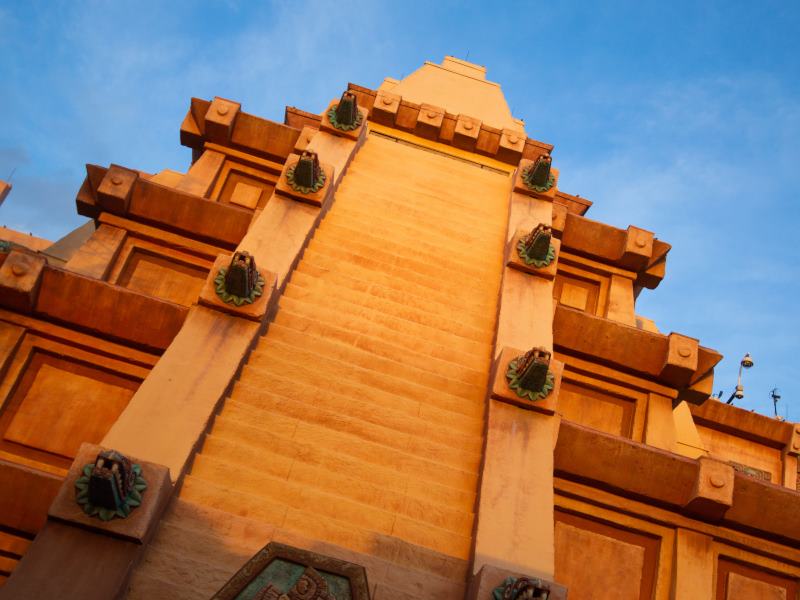 Do you know these facts about the Mexico Pavilion at EPCOT? This World Showcase attraction holds secrets even serious Walt Disney World fans don’t realize.

All of the pavilions sprinkled throughout EPCOT have secrets and surprises hiding in them, but the Mexico Pavilion is definitely one you should spend extra time exploring.

As one of the original inclusions in the World Showcase when it opened back in 1982, the Mexico Pavilion has delighted visitors young and old for almost 40 years. It’s undergone some changes over the decades, but it’s still one of the most breathtaking venues in the park. Who doesn’t get goosebumps every time they step into that twilight plaza?

The next time you stroll through the World Showcase, keep these interesting Mexico Pavilion facts in mind and plan some extra time at this dazzling detour. 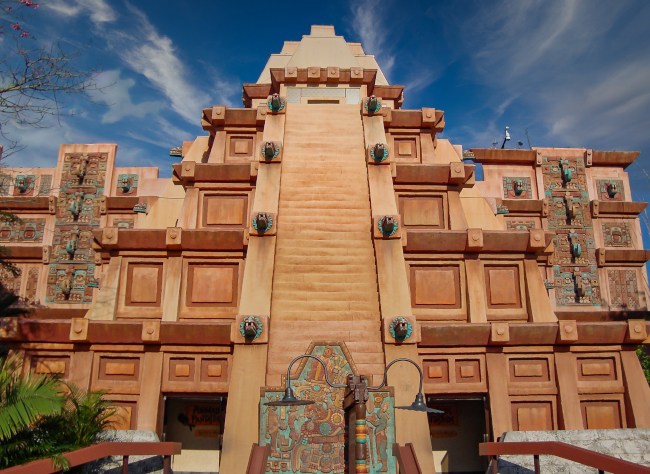 As with all of the pavilions in the World Showcase, the Mexico exhibition evokes the architectural heritage of its homeland. Its designers drew their inspiration from specific subjects when fashioning the massive monument.

The 36-foot-tall pyramid is modeled after the Aztec Temple of the Feathered Serpent located in the ancient holy city of Teotihuacán (“The City of the Gods”), near modern-day Mexico City. Many Mesoamerican pyramids still stand there today, including this temple dedicated to Quetzalcoatl. The Aztec god of wind and knowledge helped create the world and humankind.

You’ll see a depiction of this feathered figure in a massive stone art piece blocking the front stairs up the pyramid. This carving is patterned after actual mural wall paintings found in Teotihuacán. 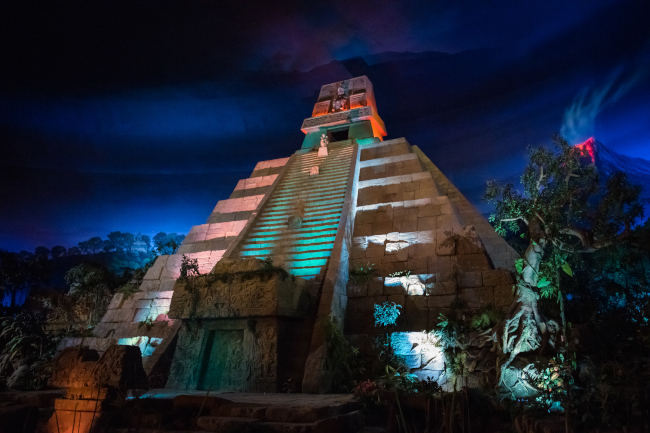 The Mexico Pavilion designers also took inspiration from the natural landscapes of the country when designing the attraction. Two distinctly different regions of Mexico are recreated in unique juxtaposition.

Inside the pyramid, though, the scenery is far different. The lush tropics of Mexico’s other major climate zone — the jungles — spread throughout the structure. Here, you’ll see the tranquil waters of a rippling lagoon, which are surrounded by tropical plants like Mexican fan palms, silver trumpet trees, Moreton Bay fig trees, orchids, and silk floss trees.

3. A FAMOUS PLACE TO EAT 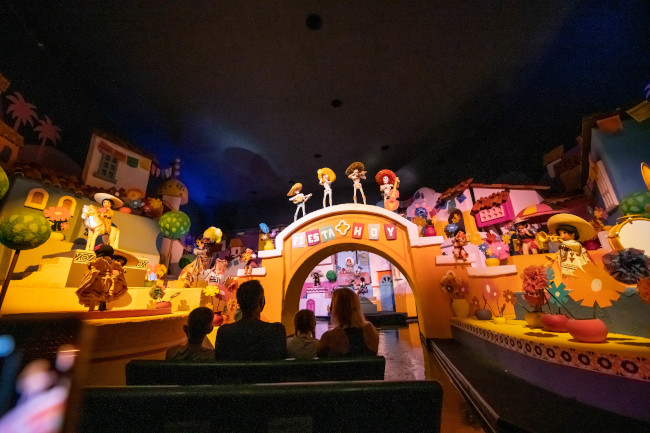 There are multiple places you can dine and drink at the Mexico Pavilion, such as La Hacienda de San Angel. But the most unique spot is undoubtedly San Angel Inn Restaurante.

This Hacienda-themed restaurant sits in the shadow of a towering Mayan pyramid. The glow from this illuminated wonder– flanked by a volcano that spews smoke and glows ominously– makes for a truly immersive dining experience!

The restaurant is actually modeled after a famous Mexico City restaurant that bears the same name. Its namesake is located in an old, renovated Carmelite monastery in Mexico City’s historic neighborhood. 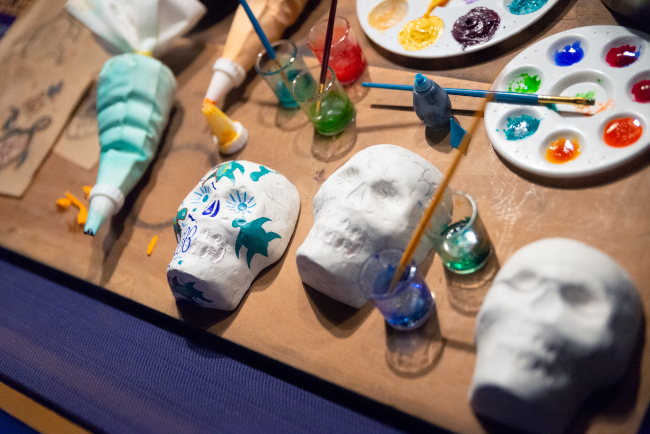 The heritage of Mexico is represented in many different ways through this festive attraction, including its artwork. If you haven’t, you should stroll through the upper level of the pyramid. That’s where you’ll find the Mexican Folk Art Gallery.

It’s one of a handful of galleries throughout the World Showcase that have changing displays of cultural handiwork in various forms.

You’ll notice many pieces here inspired by the Disney-Pixar film Coco, but you can witness many creative representations of and artifacts from Mexican history.

So if you only go to EPCOT every so often, you might find something new on display the next time you visit — especially if you go around Día de Muertos!

5. FLOAT YOUR CARES AWAY 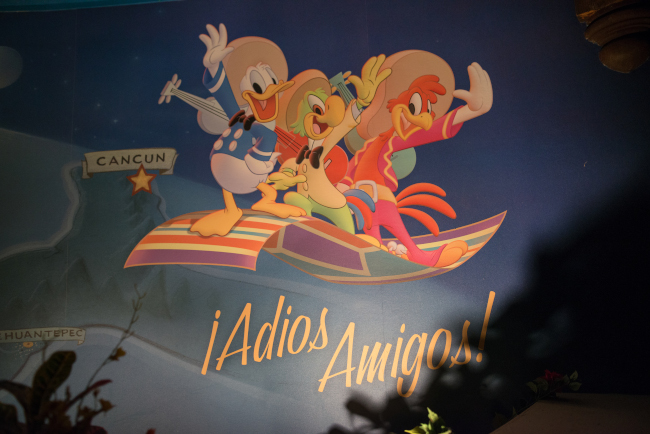 The Mexico Pavilion is one of only two installments in the World Showcase that have actual rides in them — the other being Norway. Both of these countries’ rides are boating expeditions, and they’re definitely worth hopping aboard.

Inside the Mexican pyramid, you can take the Gran Fiesta Tour. This tranquil float down the winding waterway gives you a unique view of the plaza before taking you into the jungle and through tunnels to special displays, animatronics, and other surprises you’ll only be able to access via boat (I won’t spoil all the surprises!).

Your cruise will rendezvous with Panchito and Jose, who are searching for their third caballero, Donald. Keep your eyes open for clips from their classic film! If you haven’t taken the Gran Fiesta Tour, you haven’t seen everything the Mexico Pavilion has to offer.

The next time you stroll through the Mexico Pavilion for some margaritas and churros, spend some time appreciating the details and creativity that went into this cultural homage. Hopefully, this trivia inspired you to take a closer look at this underappreciated gem at EPCOT!

Which of these Mexico Pavilion facts did you know? Think we missed anything? Let us know over on our Facebook page!